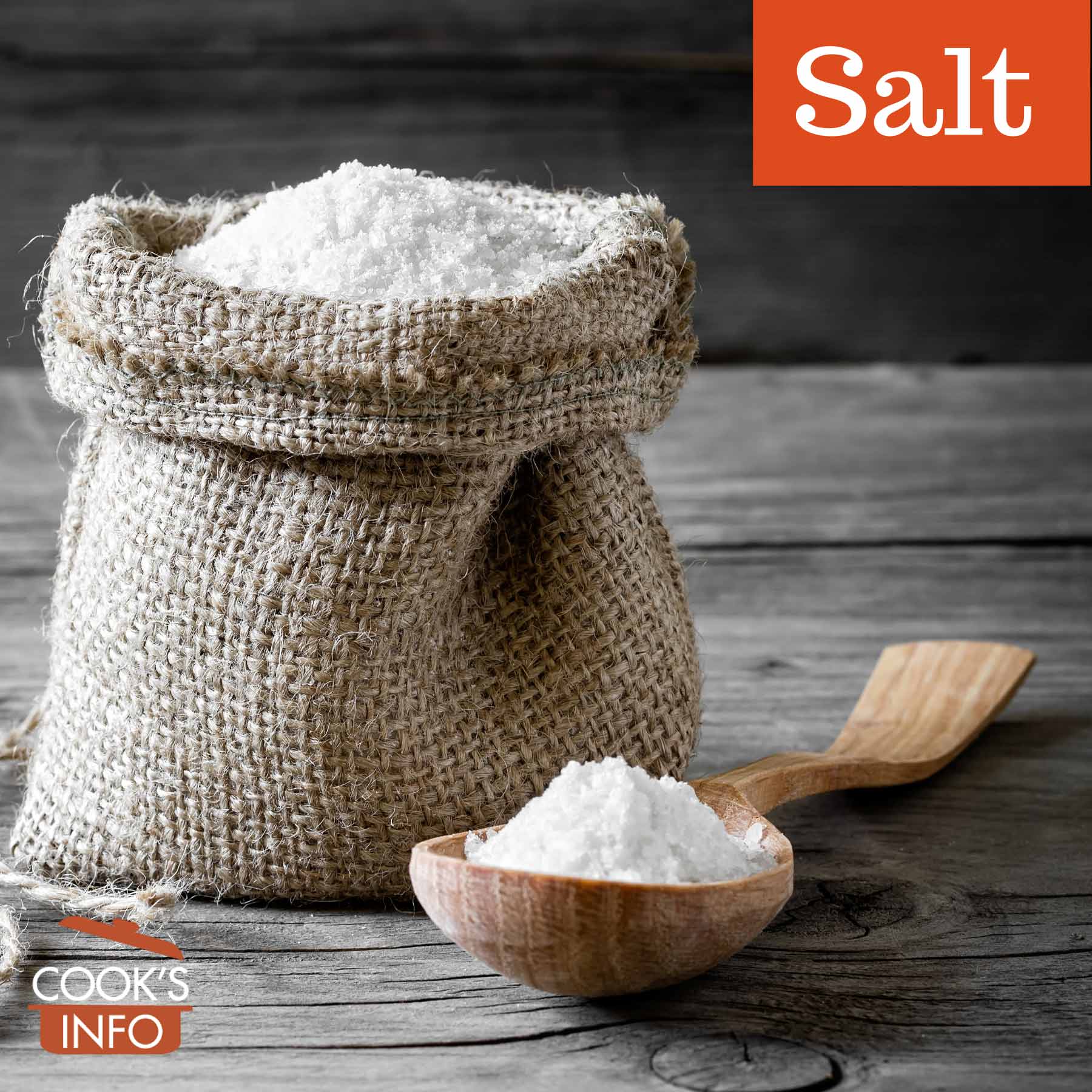 Salt may be the only food item that doesn’t need an expiry date. It doesn’t lose its taste, and even should it get damp or clump, it still tastes like salt.

Everyone knows that our bodies need salt to live. How, then, did people get by when for most of human history salt was a luxury for the very rich? We get salt from many of the foods that we eat, in items as diverse as carrots, meats, and milk. And people who lived near the sea got a lot more of it, in the fish they ate and in foods grown in coastal soil.

Salt used to draw out moisture

Through osmosis, salt draws out the moisture in things. This is why it is used on eggplant slices, and why it was used as a preservative for meats: by drawing moisture out of the cells of bacteria, it left the bacteria unable to flourish. For this same reason, though, some people consider salting meat before barbequing or grilling a bad idea: they reason that it will draw the moisture towards the surface of the meat where it will be burnt off, leaving the meat drier inside.

Salt hardens water (as opposed to soda, which softens it) and raises the boiling point a little (but only by such an infinitesimal amount that it makes no difference in that regard). Hard water, in turn, hardens cellulose and lignin (woody fibre) in vegetables, which helps to slow juices, colour and nutrients from leeching out into the water. So, you add salt to water for just about all vegetables.

When you DON’T add salt is when you are boiling foodstuffs that already have a great deal of cellulose or woody fibre in them, and so they need a good deal of softening. In this category are beans, lentils, split and dried peas, etc. When you think about it, it all makes sense: the last thing you want to do is add something to the water which will make these tougher.

Salt should also be added to water when cooking pasta for reasons of taste. It never seems to taste quite right otherwise — and your Italian friends will tell you so. They can spot pasta that was cooked in unsalted water even if it’s under 10 layers of sauce.

It’s a myth that salted water prevents vegetables from going mooshy (you would have to add an extreme amount of salt, such that you were cooking them in a salt paste, for it to have any impact in this regard). It’s also a myth that salted water makes all vegetables cooked in it taste better: aside from porous items such as potatoes, basically no significant amount of salt will penetrate into many vegetables while cooking, though an indiscernible amount may remain on the vegetables after draining.

Some food celebrities, such as Nigella Lawson, will salt their boiling water with whole handfuls of Maldon salt straight from a salt pig. When you are boiling something, however, you really cannot tell whether table salt or a more expensive salt was used in the water. Reserve fancier salts for use as finishing salts.

It’s an urban myth that a raw potato can save over-salted soups or sauces by absorbing the salt.

There are salt replacements on the market, as well as low-sodium salts blends which claim to have the same flavour as salt with less sodium.

Some say that lovage is an effective salt substitute in terms of taste satisfaction.

As a substitute for coarse salt as a garnish on baked goods, make a “salt paste” by mixing a few drops of water into some regular table salt, then dribble onto the surface of the baked goods.

Most health researchers agree that high salt / sodium intake leads to increased blood pressure, which leads to strokes and heart attacks. Consequently, most Western governments are facilitating campaigns to reduce salt consumption in the population.

Three-quarters of salt intake per person in North America and the UK comes mostly unawares, from processed foods and ready-made meals.

Many different varieties of salt now are now being marketed with varying health benefits being touted — as least, as much as they can legally get away with. It’s important to remember that salt can’t be sold as salt for human consumption (in the United States, at least) if it is less than 97.5% sodium chloride. That means any other elements in the mixture are going to be negligible, trace elements at best. They may contribute to taste, but there won’t be enough there to make any kind of nutritional difference to write home about:

“You’ve probably seen different varieties of salt such as Himalayan salt, rock salt and sea salt advertised as being a healthier option. These specialist salts supply additional trace minerals, however the levels are negligible and studies suggest you would need to consume approximately six teaspoons per day to make any notable contribution to your diet. The dangers of consuming so much salt clearly outweigh any benefits – so, if you prefer the taste of them, use them in moderation but don’t invest in them as a healthy alternative.” [2]Minerals: salt. In: Healthy Cooking Made Easy with BBC Good Food. BBC Good Food. Micro course. Step 4.7. Accessed August 2021 at https://www.futurelearn.com/courses/healthy-cooking-made-easy-with-bbc-good-food/2/steps/1224911

Table salt will have anti-caking agents added to it to ensure that it flows freely. The agents vary: dextrose, silicon, magnesium carbonate, sodium hexacyanoferrate II. Some people still add a few grains of rice in the salt shaker to absorb moisture. That may be a hang-over from days before anti-clumping agents, or a testament to just how humid those lazy, hazy summer days can sometimes get. 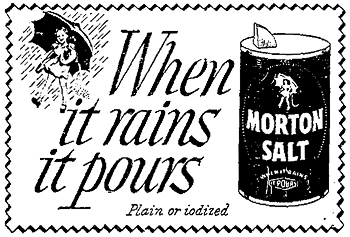 An earlier anti-caking agent was arsenic. That’s why, even though you put drops of iodine in aquariums every now and then for the health of the fish and the plants, you were told not to use iodized salt. It wasn’t the iodine you were trying to keep out, it was the arsenic. After all, you wouldn’t have wanted to poison any expensive show fish — never mind what that salt shaker on the table was doing to Grampa!

In 2010, the Campbell’s Soup Company announced that it would be reducing sodium levels in its products. In 2011, the company announced that it would be raising them again, to help with sluggish sales. [5]Arumugam, Nadia. Campbell Soup Increases Sodium As New Studies Vindicate Salt. Forbes Magazine. 18 July 2011. http://www.forbes.com/sites/nadiaarumugam/2011/07/18/campbell-soup-increases-sodium-as-new-studies-vindicate-salt/ [6]Weeks, Carly. Campbell’s adding salt back to its soups. Toronto, Canada: The Globe and Mail. 14 July 2011.

Between 1331 and 1334 Philip VI (aka Philip of Valois), King of France from 1328 – 1350, passed and formalized a law known as the “gabelle”. The “gabelle” was a tax on salt collected by private people that the Crown leased the right to collect taxes to. Philip’s immediately goal was to finance his wars against Edward III of England. The people hated the salt tax, and it was abolished by the Revolutionary government in 1790. It was reinstated, however, a few years later in 1806 by Napoleon, and remained in effect until 1946. In those 600 years, the people of France had only 16 years respite from their salt tax.

When you next look at a painting of The Last Supper by da Vinci, look to see what is on the table in front of Judas, symbolizing a broken bond. (That was your hint, by the way.)

In ancient Assyria, salt was so precious that there was a phrase to show how much you valued someone — “amelu sa tabtiya” — which meant “man of my salt”: someone with whom you would share your salt.

Wenner Moyer, Melinda. It’s Time to End the War on Salt: The zealous drive by politicians to limit our salt intake has little basis in science. Scientific American. 8 July 2011.

This web site generates income from affiliated links and ads at no cost to you to fund continued research · Information on this site is Copyright © 2023· Feel free to cite correctly, but copying whole pages for your website is content theft and will be DCMA'd.
Tagged With: Ancient Greece, French Food, Roman