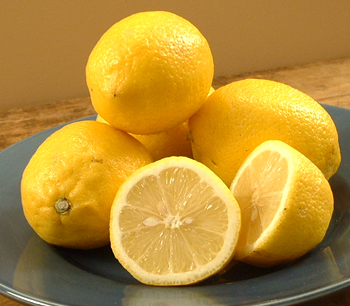 There are many varieties of lemon trees. They are thorny evergreen trees with narrow, oval light green leaves that will grow up to 20 feet tall (6 metres.) The trees are more scraggly than orange trees, and their purple tinged flowers aren’t as fragrant. The trees will start producing fruit after their third year, and enough to be commercially viable after their fifth year. Each tree will produce about 1,500 lemons a year. They will flower almost continuously, and will have fruit at all stages during the year, though most lemons ripen in the fall.

Some types of lemon trees, such as Meyers and “Rough Lemon”, will grow true to seed.

If left to ripen on trees, lemons can get a bit sweet. Picking them green makes them a little more sour. Unlike other citrus fruits, lemons will ripen after being picked and become fully yellow in storage (as bananas will.) Consequently, the fruit is often picked green, particularly in the fall, and stored in warehouses until needed for sale.

Lemons are a fruit that you don’t eat per se: we use them for their juice and their rind.

Smooth-skinned lemons have more juice than rougher skinned ones. As they get older, they lose some of their juice, which makes the skin rougher. Smaller Lemons are often proportionately more juicy than larger ones.

When buying lemons, choose ones that are heavy for their size, shiny and lemon yellow coloured. Don’t worry about small amounts of brown scarring on a lemon’s skin: as things get more and more organic, you’re going to see more of it, but it doesn’t affect the juice.

Lemons can deal with some cooking odours that you don’t want hanging around. To freshen up the inside of a particularly rank microwave, pop Lemon slices in a bowl of water, place the bowl in the microwave, and zap on high for a few minutes. If your kitchen has a distinctive pong to it after cooking fish or cabbage, boil lemon slices in a pot of water on top the stove.

To extract only a few drops of juice from a lemon, leave Lemon whole, prick with a fork, and squeeze out what you need through the holes. The rest of the lemon will store better longer this way.

Lemon peel contains proportionately about 5 times more vitamin C than the actual fruit inside does.

Lemons will keep for a week at room temperature, or store in refrigerator for up to 3 weeks in a plastic bag. Wrap cut lemons in plastic wrap, keep up to 3 days.

When you have half a lemon or lime left over, cut it into slices and freeze, then use as ice cubes in drinks, or to cook alongside fish, or to stuff inside a chicken.

Lemons probably originated in Northern India. They were being grown in the Middle East by 100 AD. Lemons in Rome were mainly for the rich as they were expensive; in the Second Century AD, Libya was an important supplier of lemons to Rome. There are lemons in frescoes at Pompeii. Plantings were done in Southern Italy, but they may or may not have survived the Dark Ages: some feel that they didn’t, and that it was the Crusaders who reintroduced them. They were growing in Southern Italy by 1150 AD.

Arabs introduced lemons to Spain, planting them there in the 700s and 800s. The Spanish in turn brought lemons to Florida in the mid 1500s and to California in the mid 1700s.

French women during the time of Louis XIV would redden their lips with lemons.

Many people were involved in the realisation that citrus fruit prevented scurvy, but it was a man named Gilbert Blaine who was able to summarize all the theories into a spoonful of lemon juice a day. By the end of the 1700s, the Royal Navy was ordering 50,000 Imperial gallons of lemon juice a year (230,000 litres).

At one point, the oldest lemon tree in England was in the gardens at Dunster Castle in Somerset. It died at the age of 100 in 2003, but cuttings made from it have survived and flourished. [1]Alder, Chris. Lemon tree, very pretty. Taunton, Somerset: Country Gazette. 17 May 2006.

“We are living in a world today where lemonade is made from artificial flavors and furniture polish is made from real lemons.” — Alfred E. Newman (MAD Magazine).

Lemon comes from the Latin Limonum, which came from the Arabic “limun”.