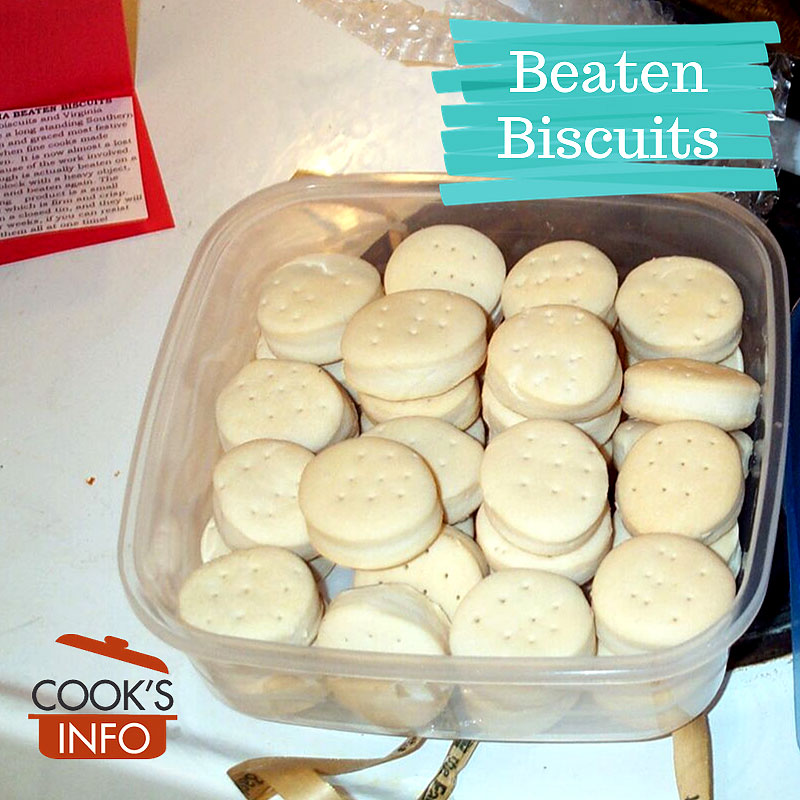 Beaten biscuits are a firm, dry biscuit, with a texture halfway between that of a risen baking powder biscuit, and a soda cracker.

Many people are surprised when they first have one, as they are expecting a soft baking powder biscuit. Instead, the texture is quite unique: crisp, flaky, and chewy all at the same time.

Beaten biscuits were made in the Southern US.

The leavener for the biscuits is your arm — you literally beat air into the dough.

They are seldom made any more owing to the labour involved.

The standard recipe was “Flour, very little lard, milk.” You would mix the dough, and then place it on a flat, smooth wooden surface — a wooden block or the top of a tree stump. You’d use a wooden mallet, the flat side of an axe, or a rolling pin, and start beating the dough. You would fold the dough every few whacks; it’s the folds combined with the beating that traps and drives air into the dough. The dough would eventually become very smooth, and “blister” — bubbles of air would start to pop out. Some people called this making the dough “blister;” others referred to it as making the dough “snap.”

Though normally this much working of a dough would produce a tough biscuit, what happens is that the dough gets worked past that point, to where the gluten starts to break down. The right point is the blistering stage. If worked past this (not that you’d want to, after all the work you’d already done), this would cause them to get tough and leaden again.

When done, the dough was either rolled out to about ⅓ inch (¾ cm) thick and cut into rounds, or formed by hand into smooth shapes, then pierced with a fork, and baked on baking sheets in a moderate oven for 20 to 30 minutes.

Some variations added salt and sugar, or used water instead of milk. Later variations would add baking powder, as it became commercially available. With the baking powder, you’d only have to beat it 15 to 30 minutes (or 100 whacks.)

Some say doubling the batch all at once doesn’t work very well; that you are best to make 2 separate batches, making 1 in advance if need be. Others say as long as you have a strong enough arm, go ahead and double the batch.

Beaten biscuits are available at very few places commercially in 2005, in Maryland and Kentucky, US, being two of the places. They are made with machines called “biscuit brakes.” You fold the dough, then pass it through the biscuit brake. Many say they are actually better done with some kind of biscuit machine than by hand,

Beaten biscuits were particularly popular in Kentucky, Maryland and Virginia. They were often served sliced in half with thin slices of country ham on them.

Beaten biscuits have an indefinite shelf life. Unlike baking powder biscuits, they don’t start getting stale pretty much the minute you take them out of the oven. This makes this a good biscuit to plan on leaving out on a buffet table (though southern hostesses say to be properly served they should be served by waiters.)

Beaten biscuits freeze well. Set out on a counter about 1 hour in advance to thaw and warm up.

Beaten biscuits originated in Virginia. The recipe appeared as early as 1824 in Mary Randolph‘s “Virginia Housewife” under the name “Apoquiniminc Cakes.” It is uncertain where the Indian synonym, “Apoquiniminc Cakes” came from, because the ingredients are completely European.

They were present in a lot of upper-class homes. Their mistresses liked to have these biscuits on hand at all times. They were a status symbol that showed that you had the help to have them made for you.

Food writers use the euphemism of “servants” when referring to who actually did the beating, but it was generally slaves that did it. The work was so miserable, back-breaking, and mind-numbing that no doubt the slaves would have gleefully pressed it onto slaves of their own, if they’d had any. Nobody whose time was worth a nickel would have spent the time doing it.

When the free labour disappeared, the biscuits themselves just about disappeared, because there was no way the lady of the manor was going to do it herself, however much her husband pined for one of those biscuits.

“In the Virginia of the olden time no breakfast or tea-table was thought to be properly furnished without a plate of these indispensable biscuits…..Let one spend the night at some gentleman-farmer’s home, and the first sound heard in the morning, after the crowing of the cock, was the heavy, regular fall of the cook’s axe, as she beat and beat her biscuit dough….. Nowadays beaten biscuits are a rarity, found here and there, but soda and modern institutions have caused them to be sadly out of vogue.” — Mrs. Mary Stuart Smith. Virginia Cookery Book (1885)

“This is the most laborious of cakes, and also the most unwholesome, even when made in the best manner. We do not recommend it; but there is no accounting for tastes. Children would not eat these biscuits — nor grown persons either, if they can get any other sort of bread. When living in a town where there are bakers, there is no excuse for making Maryland biscuit.” — Eliza Leslie, New Cookery Book (1857)

“Two hundred licks is what I give
for home folks, never fewer
An’if I’m ‘specting company in,
I gives five hundred sure!”

This web site generates income from affiliated links and ads at no cost to you to fund continued research · Information on this site is Copyright © 2022· Feel free to cite correctly, but copying whole pages for your website is content theft and will be DCMA'd.
Tagged With: American South Food