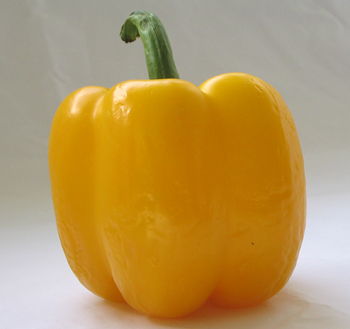 Bell Peppers are large sweet peppers that are usually somewhat square shaped with four ribs (sometimes called “lobes”.) They are bloated and hollow, with flat yellow seeds inside. They are the most commonly grown type of pepper in North America and in the UK. The Netherlands, Mexico, Dominican Republic and California are currently (2004) the major Bell Pepper exporters.

The plants are good producers. When you pick Bell Peppers, the plant will set about producing other ones. Fully mature peppers will break easily off the plant, but if there’s long enough left in the season for another batch, it’s better to cut them off and not pull them in order to damage the plant less. Most Bell Peppers are harvested when still green.

Bell Peppers are also available in other colours such as blue, brown, orange, purple, red and yellow. Red is by far the most common other colour, followed closely by orange and yellow.

The problem that producers face in growing coloured peppers is the additional time it takes for the pepper to ripen to achieve its colour, which on average is an additional 10 to 14 days in the field. That’s almost an additional two weeks for diseases, insects, and hailstorms to damage the crop after it could have been harvested for green peppers. (The exceptions to this are white peppers and some varieties of purple peppers, that need to be harvested before their colour goes red.)

When buying Bell Peppers, choose firm ones that are heavy for their size, with no soft spots, and whose seeds don’t rattle inside when you shake them.

The blue ones are a mystery. There are vague references in a few sources to them, but not enough to know if they actually exist or not. Any that you can track down and look at turn out to actually be purple. Now, purple should be exciting, because it’s still not all that common, but when someone’s promised you “blue”, as in Star Trek food, it’s a bit of a lunch-bag letdown.

Brown Bell Peppers are a chocolate brown on the outside and a paler brown inside (some varieties still show some green within.) All the pepper will turn green when cooked. 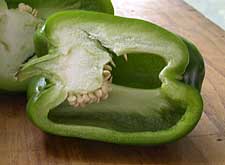 The most common version is the now ubiquitous green pepper. It is so common that even though we probably should be referring to it as a Green Bell Pepper to be safe, as there are also some very hot green peppers out there, if a recipe calls for “Green Pepper” you can safely assume that it means Bell Pepper because the recipe will qualify the phrase “Green Pepper” if another type is meant. Green peppers aren’t a very sweet “sweet pepper” — they are sweet perhaps only in contrast to hot peppers — and have a refreshing acrid taste. The reason for this is that Green Peppers are the unripened, immature version of red Bell Peppers. As Bell Peppers mature, their sugar content increases.

Green Peppers are popular with both producers and consumers precisely because they are harvested immature. In areas where the growing season is long enough, their early harvest means that producers haven’t had to spend as long tending them, and can get another crop of peppers that season out of their plants. This makes them cheaper for producers to bring to market and cheaper for us to buy.

The purple (or “lavender”) ones appear to have originated in the Netherlands. On the outside they are the colour of an eggplant; inside they are green. They turn entirely green when cooked, so there’s no point really of cooking with them — use them raw instead. Some varieties of purple peppers will turn red if left on the vine.

Red Bell Peppers are simply green Bell Peppers that have been allowed to fully ripen on the vine. They are very sweet because they are ripe. Most Bell Peppers will turn red if they are allowed to ripen on the plant. They are more expensive than green peppers because they have had to be left on the vine (meaning that the plant wasn’t able to put out another crop), and tended during that longer period. They are most abundant in the autumn, which makes sense. They are available of course at all times of the year, but it is in the fall of the year that bushels of them appear everywhere at knock down prices, and life seems very good, because your biggest challenge is thinking up ways to use them while they are available at such prices.

Not every Red Bell Pepper has started life as a green one. Some varieties, such as Blushing Beauty Hybrid and Giant Szegedi, start off ivory coloured.

The orange ones are mild and sweet. They stay mostly orange when cooked.

The yellow ones tend to be juicier than other Bell Peppers and taste almost like a fruit.

White Bell Peppers are actually more of an ivory colour. On the vine, they stay ivory coloured for a very long time, and are usually harvested during that time. If left on the vine past that, they will mature to a peach colour, then orange, then a pale red. They have a very mild taste.

If you need pepper halves to work with, cut it right in half. Which way you cut a pepper in half depends on what you are going to do with the peppers. If you are planning to stuff and bake the peppers, your first instinct will probably be to cut them in half top to bottom, which will give two long, shallow halves. It may be better, though, to cut them in half horizontally across the middle (you could also just cut the tops off, making tall pepper cases), and stuff them. Cut this way, the “shells” or halves are deeper and structurally more sound, plus they can fit in large, oiled muffin tins to support them while baking.

If you are going to be chopping your Bell Peppers up, then you can cut them in half zig-zag, for all it matters, or lop off the 4 sides one after another leaving behind just the core and the seeds at the centre.

Discard the stem and the seeds. The seeds have no taste and will just get stuck in your teeth. Pare away and discard the (usually) whitish-green membrane as well. You don’t have to get all of it, as it’s fine to eat, but it can be a bit bitter.

If you are going to chop peppers, after you’ve got them de-seeded put them skin side down on the chopping board and chop them from the flesh side — it’s easier than chopping from the skin side, as your knife can slip a bit on the skin.

Some people say they find that Bell Peppers make them burp afterwards, or give them gas. Apparently peeling the skin off with a vegetable peeler helps alleviate this — but that is a great deal of work.

Store for up to a week unwashed in refrigerator. Don’t keep them in a plastic bag, as that makes them decay faster. Green Bell Peppers last longer in the fridge than red Bell Peppers do. The green will start to go soft in 4 days, red peppers in about 2.

In sunlight, however, green peppers will decay faster than red peppers. Green peppers have 1 to 2% more oxygen inside them (perhaps owing to the rate at which green peppers photosynthesise), which better feeds bacteria promoting decay. [1]

There are two ways to freeze them. Either dice or chop finely, then freeze as is, or chop or slice and blanch for 4 minutes, then drain and freeze. The ones that are blanched seem to freeze better for longer periods, up to a year or more. The unblanched ones seem to want using within 6 months. Either way, plan of course to use frozen ones for cooked dishes.

Do, however, de-seed them before freezing — it is far, far easier and faster to de-seed them while they are still in fresh halves, when you can basically get all the seeds in just one or two scrapes of the knife.

[1] O’Hare, Mick. Food science and food myths: James Bond may have been onto something. London: Daily Telegraph. 5 October 2010.

This web site generates income from affiliated links and ads at no cost to you to fund continued research · Information on this site is Copyright © 2022· Feel free to cite correctly, but copying whole pages for your website is content theft and will be DCMA'd.
Tagged With: Bell Peppers, Peppers, Sweet Peppers