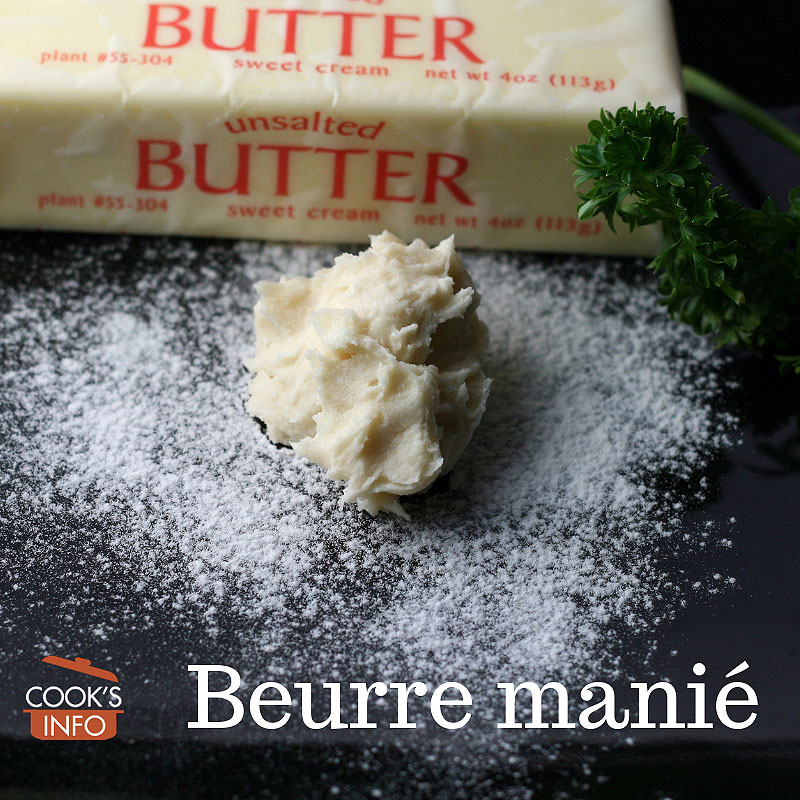 Beurre Manié is secret of French classical kitchens: it’s an instant sauce rescuer. And it is nothing more complex than flour and butter kneaded together.

Beurre manié can be extremely useful in the kitchen, as it can perform last-minute rescues of sauces and gravies that are too thin. Why beurre manié works to thicken already-cooked sauces without making them lumpy is that the flour molecules, which would normally clump together in a hot liquid, are kept apart by the fat in the butter.

It’s a shame that an English name hasn’t evolved for beurre manié, though: with its French name no one will know how to pronounce it let alone remember that it exists, yet it is very handy.

It is like the thickener called “roux“, in that it is also a mixture of just flour and butter. Roux, however, is cooked before using, and beurre manié is not.

To make beurre manié, knead together equal amounts of flour and butter. Some sources, such as Larousse, suggest a 3 part / 4 part ratio, e.g. 75 g butter to 100 g flour.

It can be stored well-wrapped in the fridge for several weeks.

To use, whisk it at the last minute into a sauce that is too thin. Don’t let the sauce cook for any more than a minute or two — beyond that, the starchy taste of the flour will start to come out, and then you will have to cook it a lot longer, up to 30 minutes, to get rid of that starchy taste, as you would with a roux.