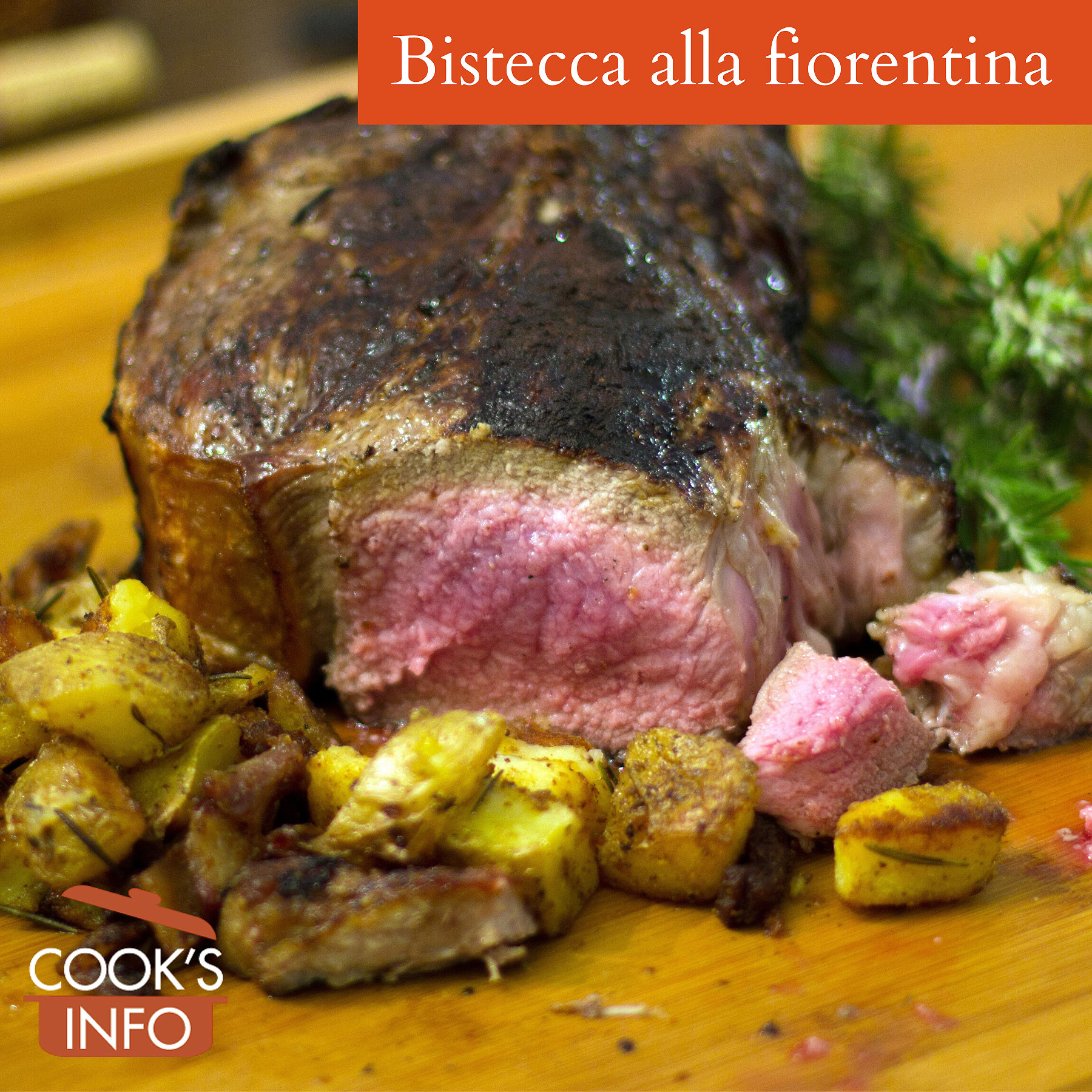 Bistecca alla fiorentina is not a specific cut of meat but rather a method of preparing and serving steak in Tuscany, Italy.

In the authentic version, the beef used comes from Chianina cattle; some people allow “Maremmana” cattle.

The steak used should be 4 to 5 cm thick (1 ¾ to 2 inches). The thickness is gauged by the thickness of the T-bone.

Porterhouse is the best cut; failing that a T-bone, and failing that, a strip steak. Absolute purists say that the T-bone should have filet on one side, and sirloin on the other, be 3 cm high (just over an inch), and be from a calf. The overall weight will be 700 to 900 g (1 ½ to 2 pounds). This size will serve two people. 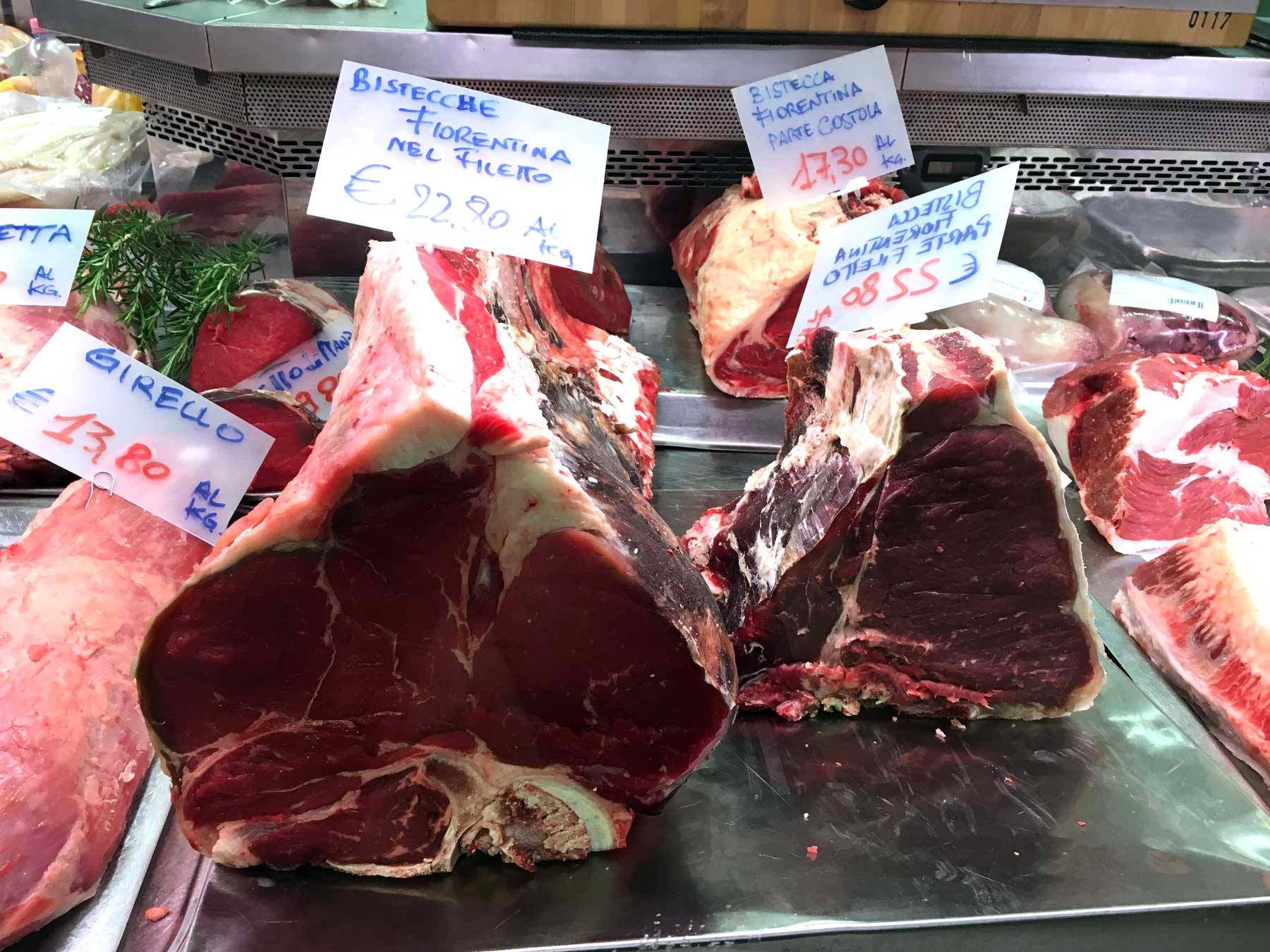 The steak is charcoal grilled and seasoned with salt and pepper. It is always cooked rare to medium-rare.

The steak is cut before serving, rather than plunked whole on your plate Texas-style.

In restaurants in Florence, bistecca alla fiorentina is served by the “etto” (100 g / 3.5 oz sizes.) It used to be served with a pat of butter on top as a condiment. Now, a wedge of lemon is also common.

Traditionally,  it was served with beans in olive oil and sage (particularly Zolfino Pratomagno beans). 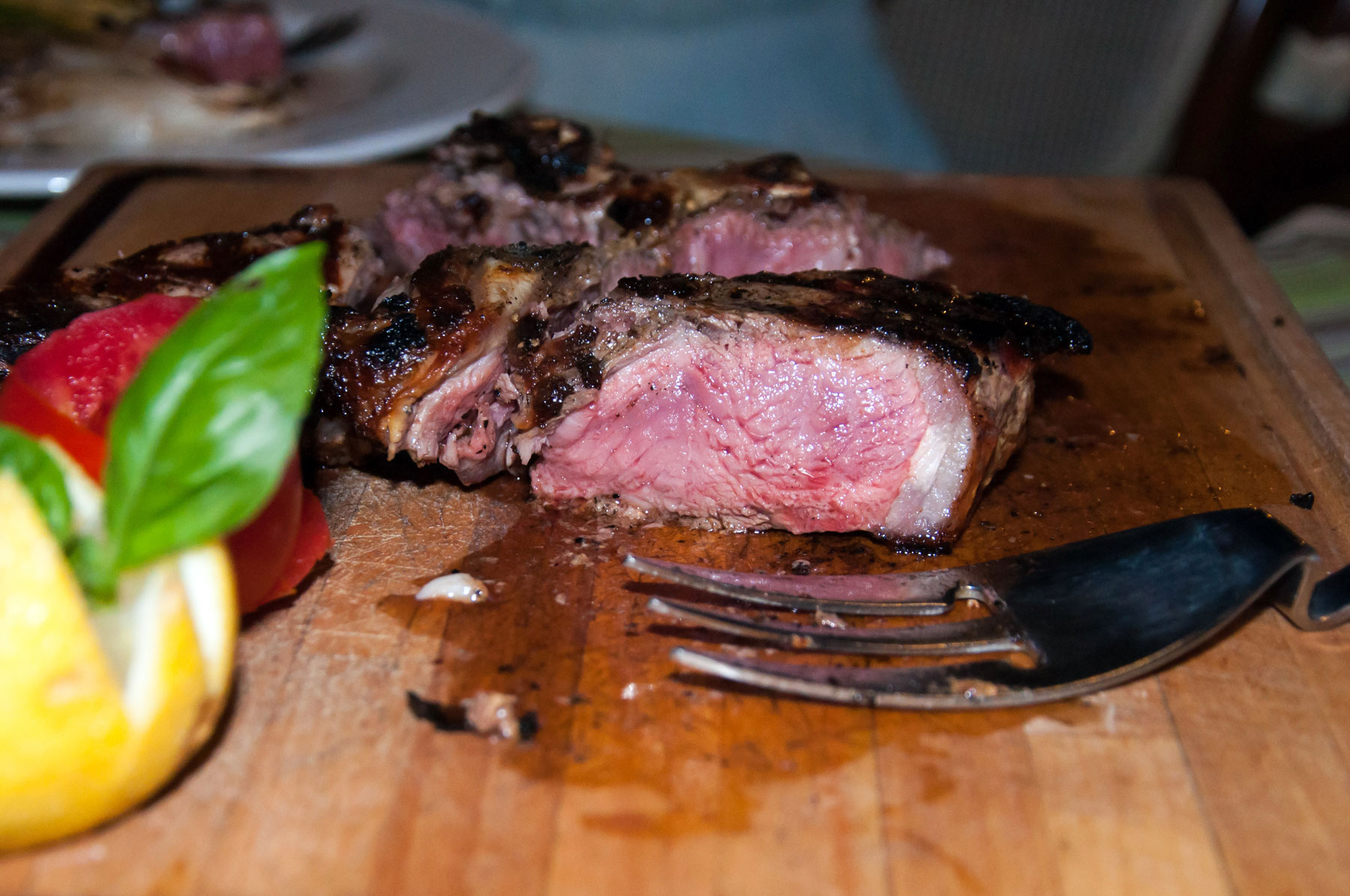 The meat should be out of the refrigerator for at least an hour before starting. It is grilled on a heated grill about 10 cm (4 inches) above the coals. The grill should be heated first, but not so much that it burns lines into the meat.

Some people do the 5 minutes per side without salt and peppering it. They then put it on a warmed platter, salt and pepper the two sides, then let rest for 2 to 3 minutes.

Variations in seasoning include rubbing the finished steak with a clove of garlic, or lightly drizzling it with olive oil. 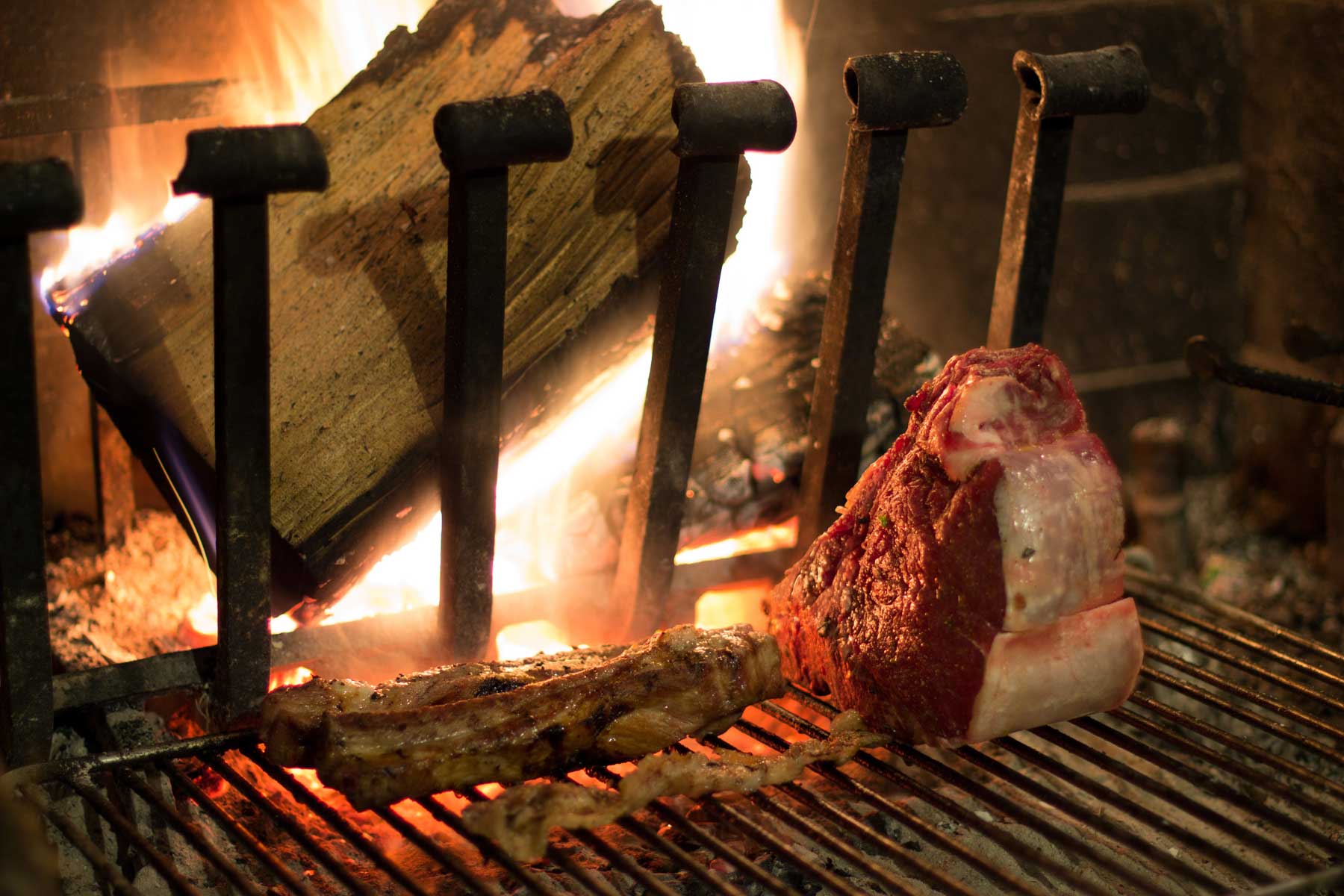 The steak cut used in bistecca alla fiorentina is not actually a traditional Tuscan meat cut. As the name would indicate, it was adopted from the English word “beefsteak”, and in fact, it was wealthy English tourists on the grand tour of Italy with their love for beef who introduced demand for the cut.

The dish was banned for a few years starting on 1 April 2001, after Italy had its first case of mad cow disease in January 2001. The ban was actually not on the dish itself, but rather on selling beef with the bone attached from cows that were more than 12 months old. Traditionally, 18 month old cows were used for this steak.

During that time, the dish was still made in a way — they would serve it minus the part of the bone that had marrow in it.

But this being Italy, trusted customers were of course still able to get their bistecca alla fiorentina the traditional way, despite the ban.

The ban lasted until December 2005. 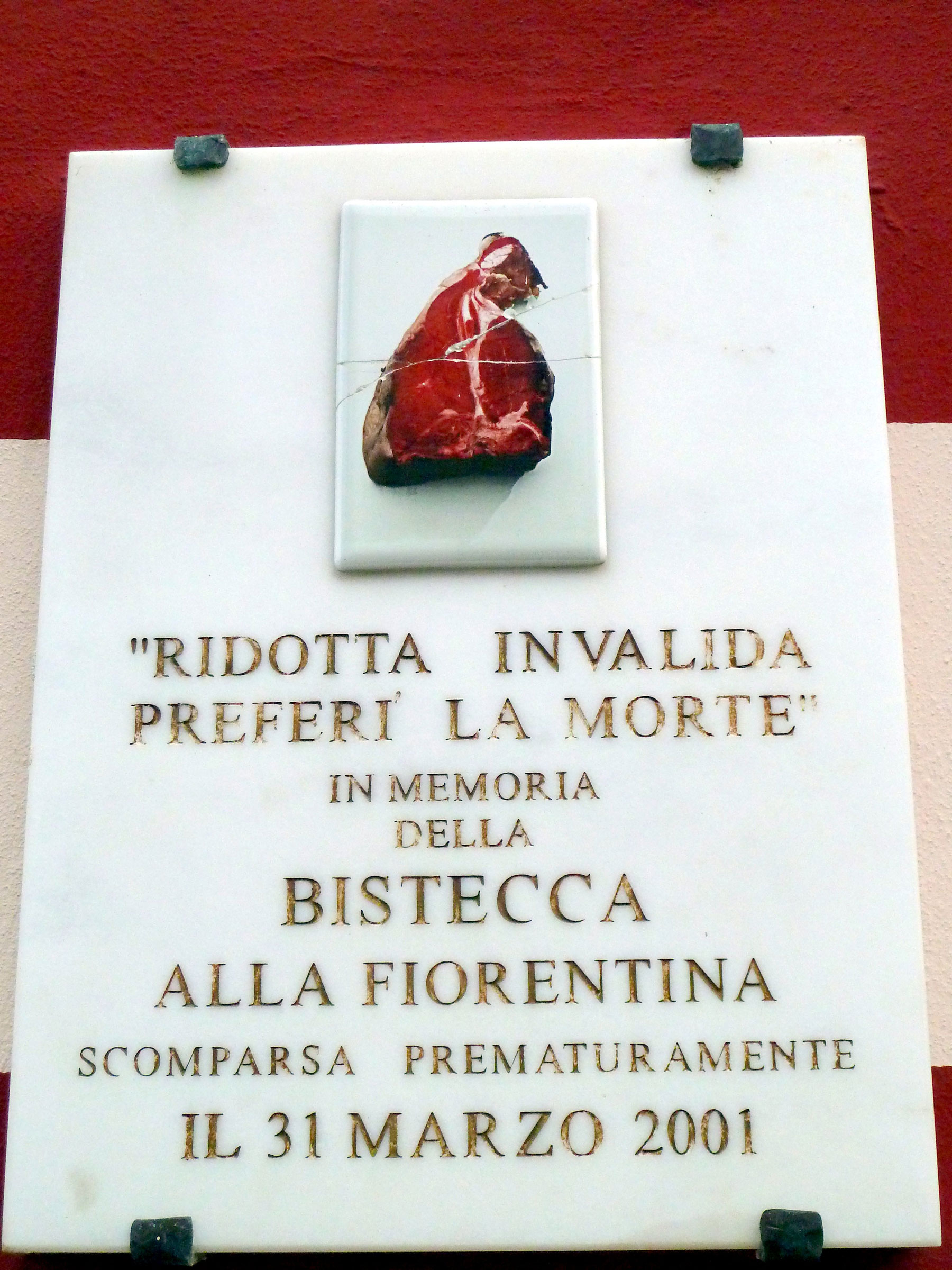 Sign erected during time of ban. “Reduced to an invalid, it preferred to die. In memory of the steak of Florence, died prematurely 31 March 2001.” Sign posted at the Antica Macelleria Cecchini in Panzano, Italy. Dave & Margie Hill / flickr / 2001 / CC BY-SA 2.0

This web site generates income from affiliated links and ads at no cost to you to fund continued research · Information on this site is Copyright © 2022· Feel free to cite correctly, but copying whole pages for your website is content theft and will be DCMA'd.
Tagged With: Beef Steaks, Steak, Tuscan Food