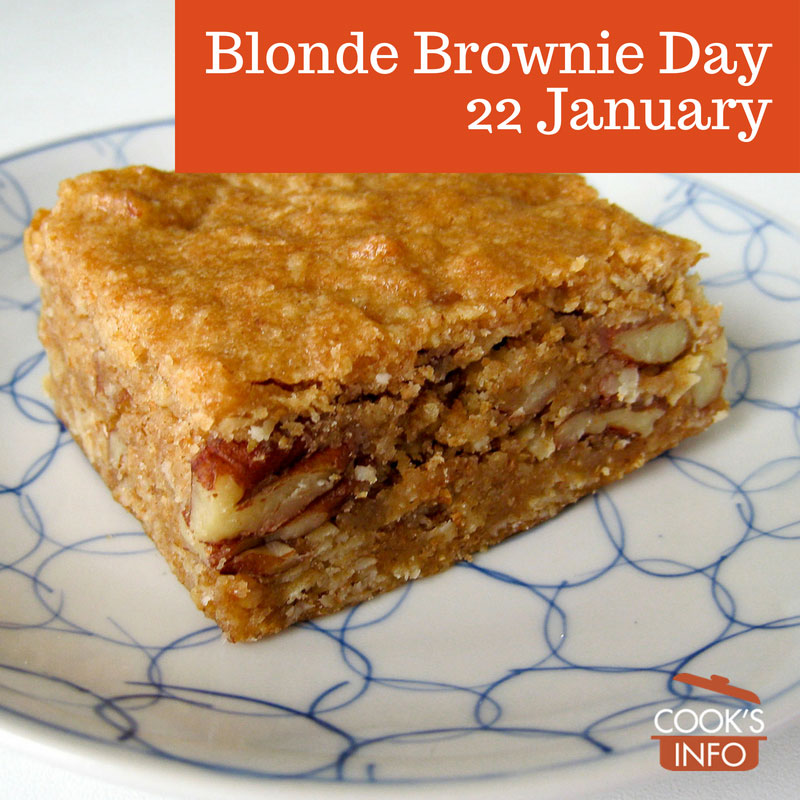 The 22nd of January is Blonde Brownie Day.

It falls handily in the third week of January, just in case you didn’t already have a delicious reason to ignore that pesky New Year’s resolution diet.

Besides, with the holidays just having ended, you might still be sick of chocolate, but when’s the last time you had a blonde brownie?

Think of those dense, chewy squares of cake…

It doesn’t just have to be a plain one; it could be one with nuts in it. And you can have it with a warm sauce, such as a butterscotch, chocolate or even fruit sauce, or a flavoured sauce, such as peanut butter, amaretto, or cappuccino.

The first print mention of Blonde Brownie Day that CooksInfo has found dates from 2007 in Alabama:

“Did you know that there is a National Blonde Brownie Day as well as a National Butterscotch Brownie Day? The blondes are celebrated Jan. 22 and today is set aside for the butterscotch treats.” — O’Daniel, Judy. Brownies are perfect for mother. Fort Payne, Alabama: Fort Payne Times Journal. 9 May 2007. Page B1, Col. 1.

This web site generates income from affiliated links and ads at no cost to you to fund continued research · Information on this site is Copyright © 2023· Feel free to cite correctly, but copying whole pages for your website is content theft and will be DCMA'd.
Tagged With: Brownies