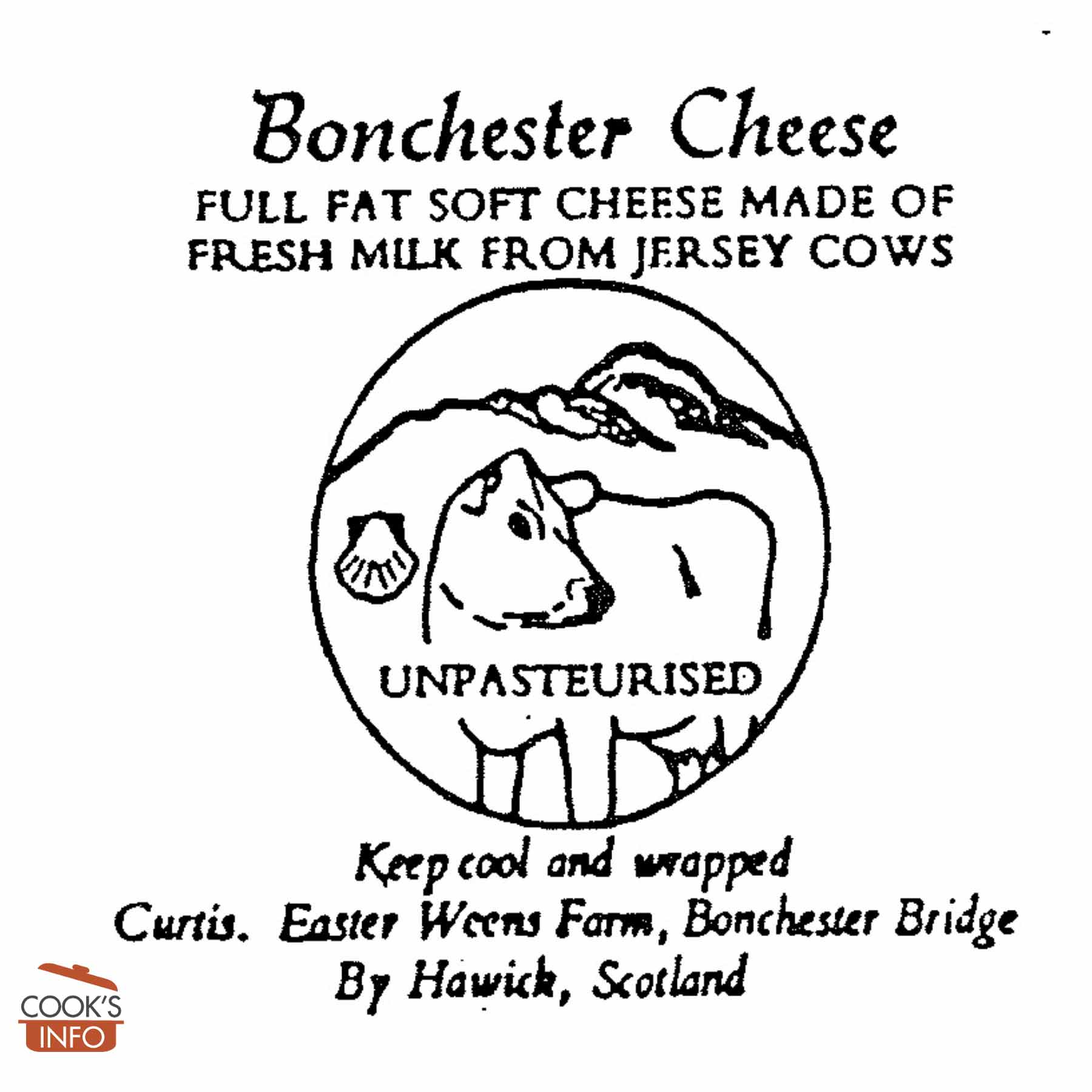 Bonchester Cheese is no longer in production as of 1998.

Bonchester was a Camembert-style cheese made in Scotland. It came in small, thin rounds of two sizes, 100g and 280g.

It had a soft white floury rind with some small freckled patches on it. Inside, it had a butter-yellow color, and a buttery taste with flowery tones to it.

It was a PDO cheese, made from unpasteurized milk from Jersey cows from March to December.

The production method was somewhat similar to French Camembert cheese. Milk from the previous night’s milking was warmed to 32°C, then mixed in with that morning’s milk. Bacteria and penicillin mould starters were added to the milk. The milk was warmed to and held at 25°C for 90 minutes. Rennet was added, let stand an hour, the curd was cut, let stand 20 minutes. The curd was put into moulds, covered, let stand for 3 hours at 25°C. It was turned, let stand another 3 hours, turned again, let stand overnight, and turned again. The cheese was taken out of the mould, brined for 15 to 30 minutes depending on its size. It was then drained, put on wire racks, sprayed with penicillin mould, and let stand for 4 days at 13°C. Then it was put in a maturing room for about 6 days at l0- l2°C, where it was allowed to ripen 4 to 8 weeks.

When full ripe, the inside became almost custard-like.

The makers of Bonchester Cheese also made Teviotdale Cheese and Belle D’Ecosse Cheese.

Bonchester Cheese was created in 1980 by John Curtis (born c. 1939) and his wife Christian at Bonchester Bridge in Roxburghshire in the south of Scotland.

The Curtises met while students at Wye College of Agriculture in Kent. At one point before that, John had been in the Merchant Navy.

They drew on the The West of Scotland Agricultural College for help in perfecting the cheese and commercializing it. They started production in 1982 in a building on the farm they’d converted to make cheese in. They made a new building in 1987 to keep up with demand. They called their business “Easter Weens Enterprises.” A cheesemaker Marjory Young worked for them.

The Bonchester Cheese PDO application, submitted in 1992, contains more historical information about the business and the cheese.

John ran unsuccessfully for the anti-Europe “British Referendum Party” in Roxburgh and Berwickshire in the May 1997 General Election.

The couple ceased production of cheeses in September 1998, selling off the herd and letting go five full-time and three part-time workers.

John said, “We find the present regulatory regime intolerable. The benefits are obscure but the suppression of enterprise and loss of freedom are obvious. We condemn parliament for its policy of appeasement to agri-business and second-rate scientists, and for lacking commonsense and resolution when confronted by food scares. We deplore the destruction of the rural economy.”

There may have been some intention to try to revive it or at least keep legal status alive, judging by a subsequent Bonchester Cheese PDO filing done in 2007.

Armstrong, Anthony. Learning about a fair return for the top jobs; Thorns from the Thistle. London: Daily Mail. 20 March 1997.

Macdonald, Claire. Say cheese and raise your glass to a taste of heaven. Edinburgh, Scotland. The Scotsman. 5 November 2003.

This web site generates income from affiliated links and ads at no cost to you to fund continued research · Information on this site is Copyright © 2022· Feel free to cite correctly, but copying whole pages for your website is content theft and will be DCMA'd.
Tagged With: Protected Designation of Origin, Scottish Cheeses