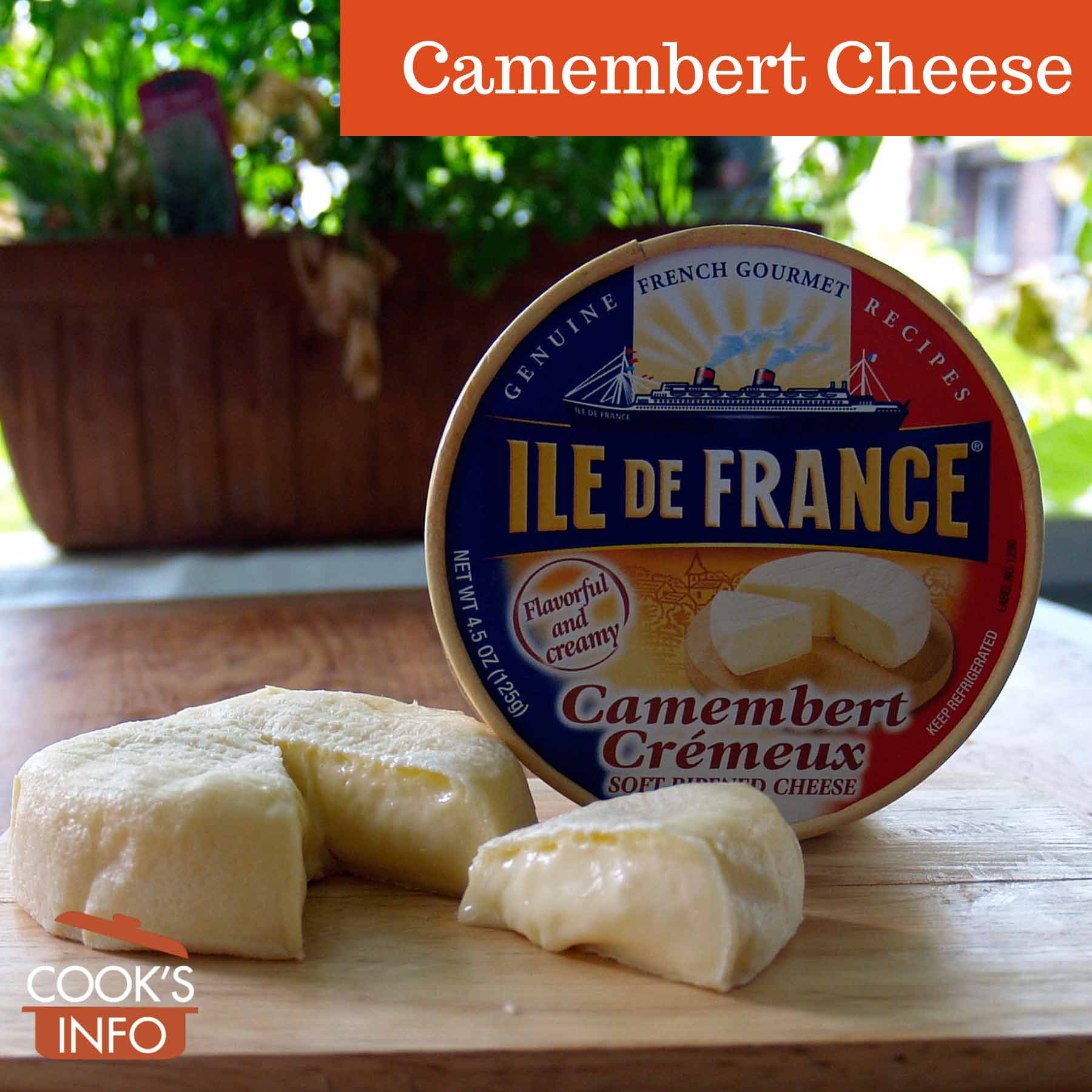 Camembert is a mild, creamy cheese that is slightly salty. The outside crust may acquire a few splashes of red as it ages.

Camembert was designated a generic cheese name under the PDO food registration system, so it can be made anywhere, by anyone.

Camembert starts off as a solid, soft cheese formed into thin wheels that have a coating of white surface bacteria applied to them. The bacteria does the ripening; as it spreads inward, the solid inside turns into a creamy semi-liquid. The wheels are kept thin because if they were too thick, the outside might liquify entirely while the inside remained unripened.

If Camembert is too ripe, it will have an ammonia smell to it and a lot of red on the surface. 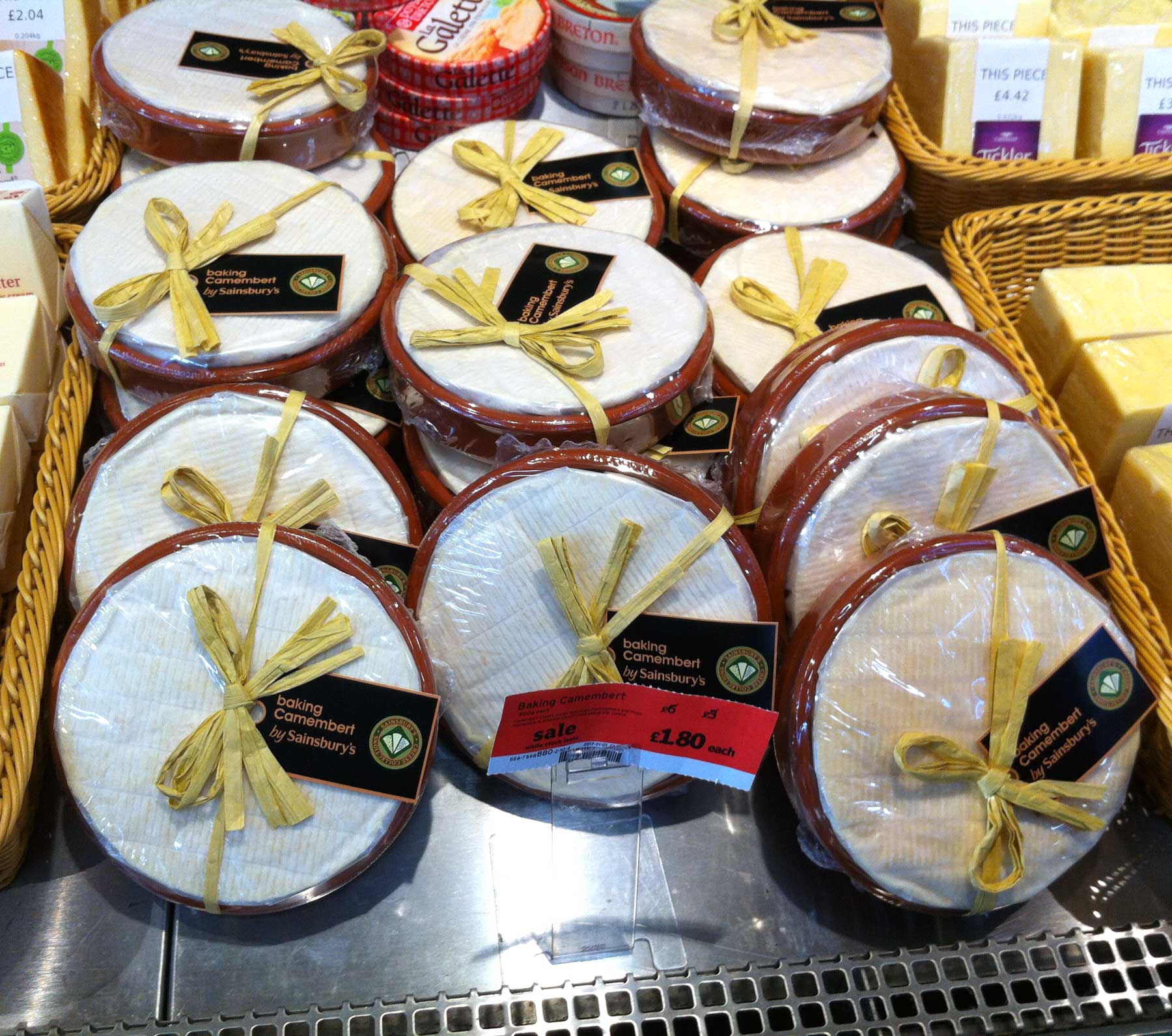 You’ll have noticed that Camembert (as well as Brie) has looser packaging than many other cheeses. It can’t be sealed in air-tight packaging as that would shorten its shelf life.  Around 80% of the Camembert sold in the world is wrapped by machinery from the German company “Alpma”. [1]The Cheese Industry – Alpma builds the machinery. DeutscheWelle. 2 June 2015. Accessed April 2022 at https://www.dw.com/en/the-cheese-industry-alpma-builds-the-machinery/av-18493092

While Camembert is a generic name, “Camembert de Normandie“, however, is a protected name, having received a French AOC in 1983, and a European PDO in 1992. Both certifications specify that raw milk must be used in order to carry this name. The cheese will be labelled “Au lait cru“.

The two companies said they needed to make the move in order to address modern food safety requirements. 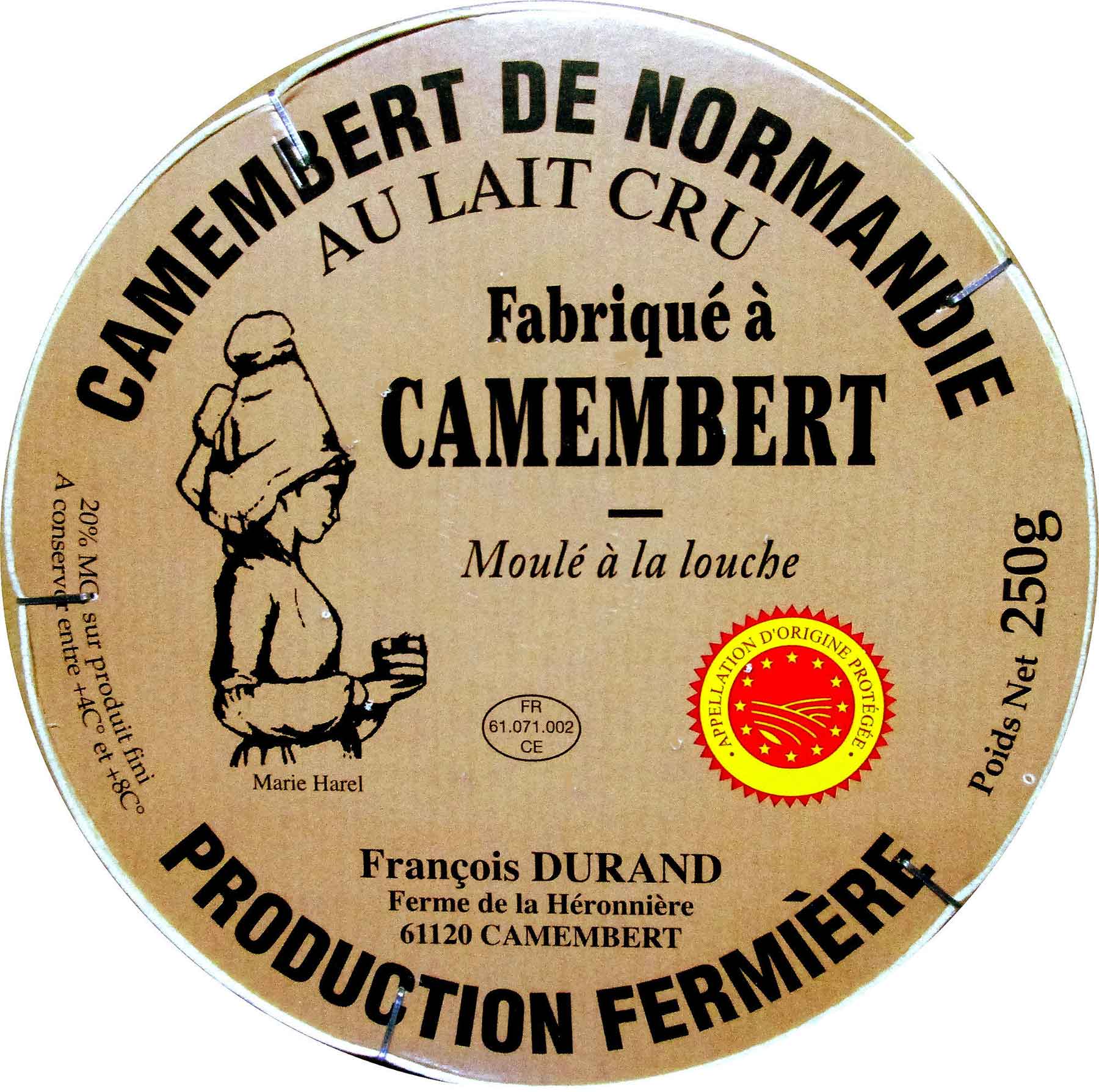 Serve at room temperature as Camembert really does have more flavour that way rather than straight out of the refrigerator.

Use within a few days after purchasing. Some Camembert cheeses can be frozen successfully. For best results, first cut the cheese in half, and wrap each half tightly. Thaw in the refrigerator. If the cheese comes out crumbly, use for cooking.

Camembert dates from the time of the French revolution, in the late 1700s in Normandy. A priest, the abbé Gobert, was fleeing the Revolutionary terror in Paris, and made for Normandy, which was the route to England and safety. On 23 August 1792 he arrived at the door of Marie (né Marie Catherine Fontaine) Harel (1761 – 1844) [3]Gérard Roger-Gervais, L’Esprit du camembert, Cheminements, 2005, p. 53. Confirmation par les archives départementales de l’Orne, document 3NUMECEC508/3E2_508_34 ( 1843-1852 ), p.91/485. [4]Different death dates for Marie floating around including 1812, 1844, and 1865 as shown on her original statue.and her husband Jacques Harel. Marie was a cousin of the bishop who had sent the young priest out of Paris. Marie had been making cheese to take to the local market each Monday, but it was a yellow, greasy cheese which didn’t sell well. The priest knew how to make Brie, and helped Marie to improve the cheese she made. The new improved cheese was a hit and sales took off. After a few more experimentations, Marie decided that the ideal size was 11 cm (4 inches) in diameter, which remains the size today.

Napoleon was reputedly served the cheese, and liked it so much he kissed the servant girl who served it to him. Marie’s son took up making the cheeses, but he moved back to his mother’s home town: Camembert. In 1863, Napoleon III was served the cheese, and he liked it as much as his ancestor did. He asked where it came from and was told, Camembert, and he replied, “Well, then, from now on it will be known as Camembert!”

The village of Vimoutiers in Normandy, where Marie lived, has a statue erected to her. On 14 June 1944, bombing destroyed a large part of the complex where the cheese was made. Some of the rubble falling from the building fell on the statue and knocked the head off. The head was found and placed temporarily at the base of the statue, but then it disappeared, likely taken by a souvenir seeker (and no doubt now has pride of place on a flagstone fireplace in a Milwaukee basement). With support from the Borden Cheese Company in America, a new statue was erected in 1956. 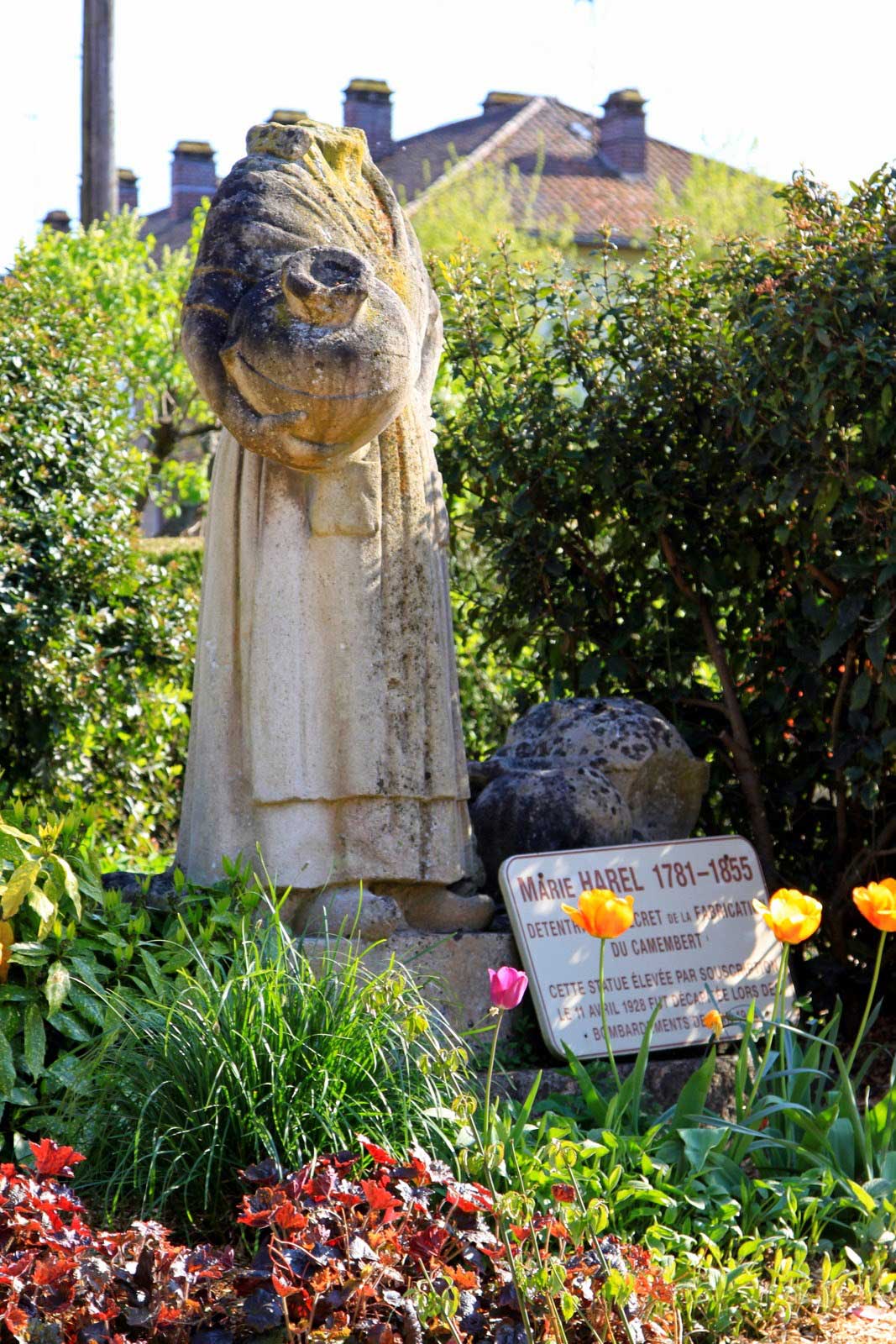 Customer: Camembert, perhaps?
Owner: Ah! We have Camembert, yessir.
Customer: (suprised) You do! Excellent.
Owner: Yessir. It’s..ah,…..it’s a bit runny…
Customer: Oh, I like it runny.
Owner: Well,.. It’s very runny, actually, sir.
Customer: No matter. Fetch hither the fromage de la Belle France! Mmmwah!
Owner: I…think it’s a bit runnier than you’ll like it, sir.
Customer: I don’t care how blinking runny it is. Hand it over with all speed.
Owner: Oooooooooohhh……..!
Customer: What now?
Owner: The cat’s eaten it.

Even though Camembert is a place and place names in English are capitalized, style guides differ in advising whether “Camembert” the cheese should be capitalized or not. Some style guides simply say the writer may decide, but be consistent. The United States government official style manual (2016) calls for Camembert the cheese to be capitalized. (2016. Chapter 4, page 52.)

This web site generates income from affiliated links and ads at no cost to you to fund continued research · Information on this site is Copyright © 2023· Feel free to cite correctly, but copying whole pages for your website is content theft and will be DCMA'd.
Tagged With: French Cheeses, Normandy Food, Surface-Ripened Cheeses