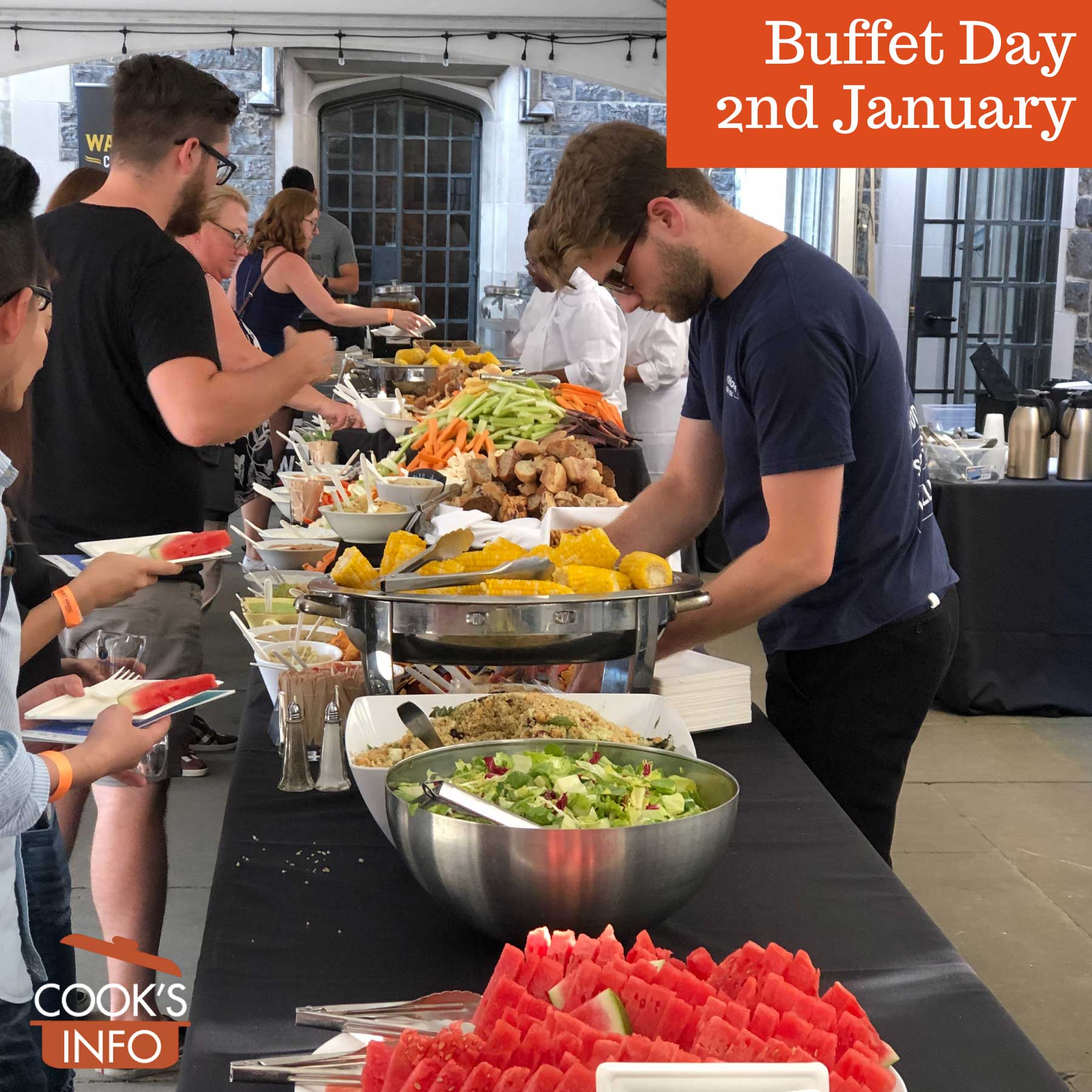 The 2nd of January is Buffet Day.

This may be your last chance to fill up before the post-holiday diet begins in earnest! The timing may also be fortuitous in that everyone is probably by now tired of the work of cooking holiday meals at home, and just wants to get out and have it all done for them.

You could go out to a restaurant buffet today. Or, you could also celebrate at home with a potluck with friends or neighbours: maybe set a theme such as Italian, Chinese or seafood.

Most buffets in restaurants are “all-you-can-eat”, though occasionally you may still find one in which only one trip to the buffet table is allowed per customer. Beverages are not always included in the price.

Almost all buffets insist that you eat the food there — no take-away allowed.

“All-you-can-eat” buffets are popular not just because of the quantities of food you can consume. Not everyone goes to one just to overeat. Some people like the idea of the fixed price. Some like the variety. Some know that picky eaters can be left to decide for themselves what to put on their plates.

You can actually see the food first, instead of guessing from a menu description. And people can decide on the portion of a particular food that they want to eat.

A buffet can make eating exciting, through the abundance of choice. It also makes eating an event.

Some people dress for a buffet, famously wearing the biggest-waisted, most stretchy pants they have. Many people don’t eat all day before going to a buffet dinner.

Las Vegas buffets are famous. Some there offer over 300 different dishes to choose from. The buffet at Caesar’s Palace in Las Vegas is one of the most famous, with over 500 food items. After you’ve paid to get in, some such as Carnival World Buffet will let you stay in all day and eat.

Some buffets may specialize in types of food, such as The Village Seafood Buffet in Las Vegas.

Some restaurants change the type of buffet offered by time of day: breakfast buffet, lunch buffet and dinner buffet, with different foods accordingly.

Some buffet restaurants offer special promotions on Buffet Day with special prices, or special foods offered, or two-for-one deals: just pay one admission and two people get in.

“Buffet-style feasting” has become something of an American pastime.

The ritual solidified its place in history when, in 2011, blogger John Bryan Hopkins declared Jan. 2 “National Buffet Day”. Hopkins chose the second day of the year, saying it’s a great time to splurge before embarking on a New Year’s Resolution diet.

National Buffet Day is recognized by Hallmark and according to Hopkins, is celebrated enthusiastically in the south and Midwest.” [2]Dilworth, Joe. Everything. It’s what’s for dinner. Newport, Rhode Island: Newport Mercury. 19 September 2012. Page 11, col. 5.

“Buffet” in French means a sideboard from which food is served. It would rest there in dishes until it was served by servants to the guests.

Later, the word came to refer as well to a style of dining in which guests served themselves.

Buffet-type meals in a home or community setting are also common, except different people bring the food, and the meal is called a “pot luck.”