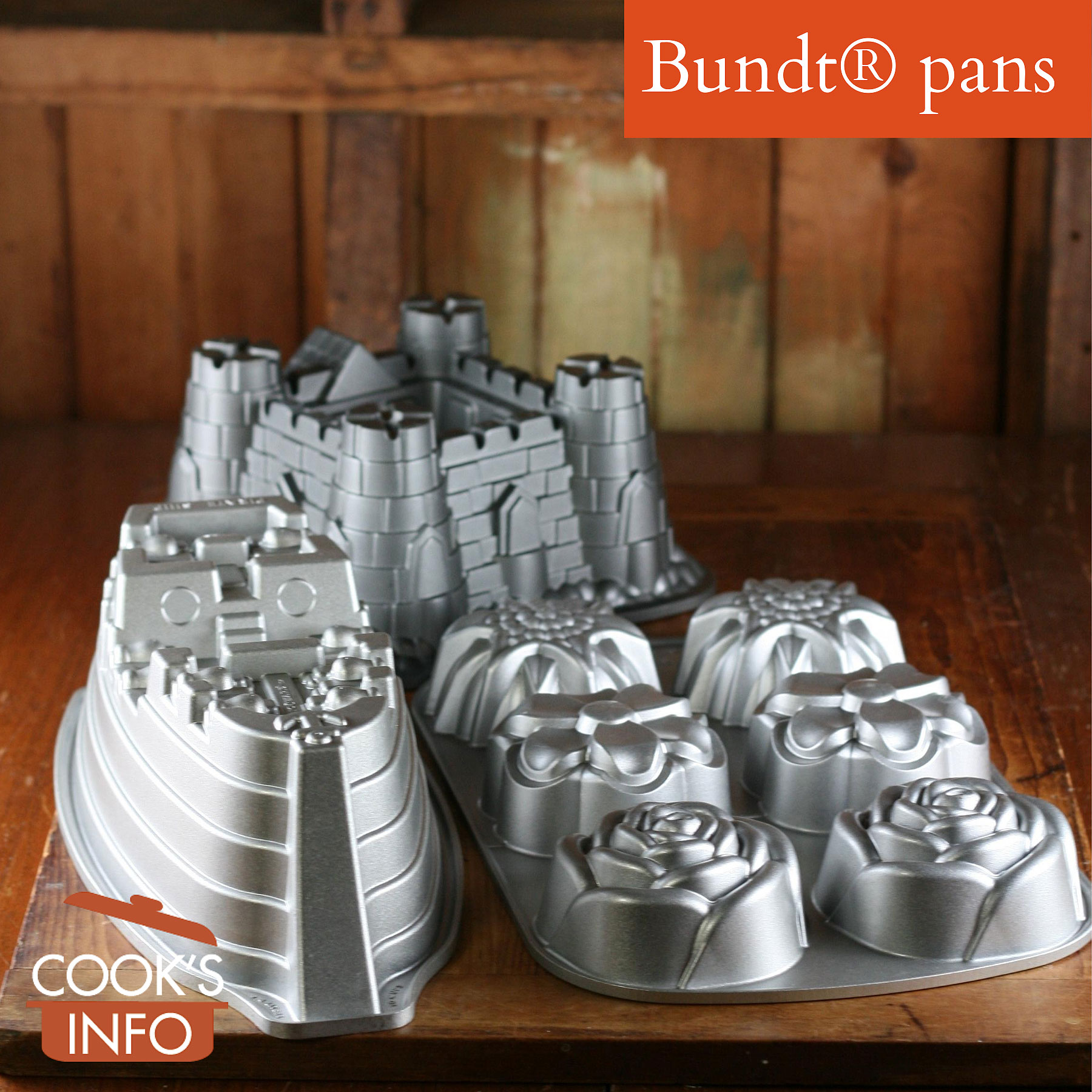 A Bundt® pan is a trademarked line of fluted tube pans for baking cakes in.

All the pans have decorative moulded sides. Some designs also have a hollow tube or space coming up through the middle. They are usually made of heavy cast aluminum. They are all one-piece pans, and come in a wide range of sizes. The pans are made by the Nordic Ware® Company in St Louis Park, Minnesota.

A cake baked in a Bundt® pan, once turned out, has decorative sides on it with a crusty surface. The cake can be glazed, frosted (aka iced), or dusted with icing sugar. For the cake batter, you can use a cake mix, or a scratch recipe. Any middle space can be filled with something such as whipped cream or ice cream, if desired.

Other makers such as Wilton make similar pans, calling theirs “Bundform” pans.

Several dozen different shapes of Bundt pans have been made at one time or another by Nordic Ware. There’s even a cathedral design pan, “based on” Notre Dame Cathedral (presumably the one in Paris; it’s not specified), which is 3 ¾ inches tall by 9 ¼ inches wide (9 ½ cm x 24 cm), and a Hansel and Gretel’s cottage.

You can also get small ones that make “individual serving-size” Bundt cakes.

Their original classic wreath design, however, remains the most popular: by 2005, 50 million of that original design had been sold, and close to 10 million of the other designs. The Williams Sonoma kitchen store often gets exclusive sales rights on certain designs for a period of time before other retailers are allowed to carry them.

If you’re making a very large bowl of punch, you can freeze water in a Bundt pan, thus using it as a fancy mould for a large block of ice for your punch bowl.

The pans can also be used for aspic salads, and for meatloaf rings. 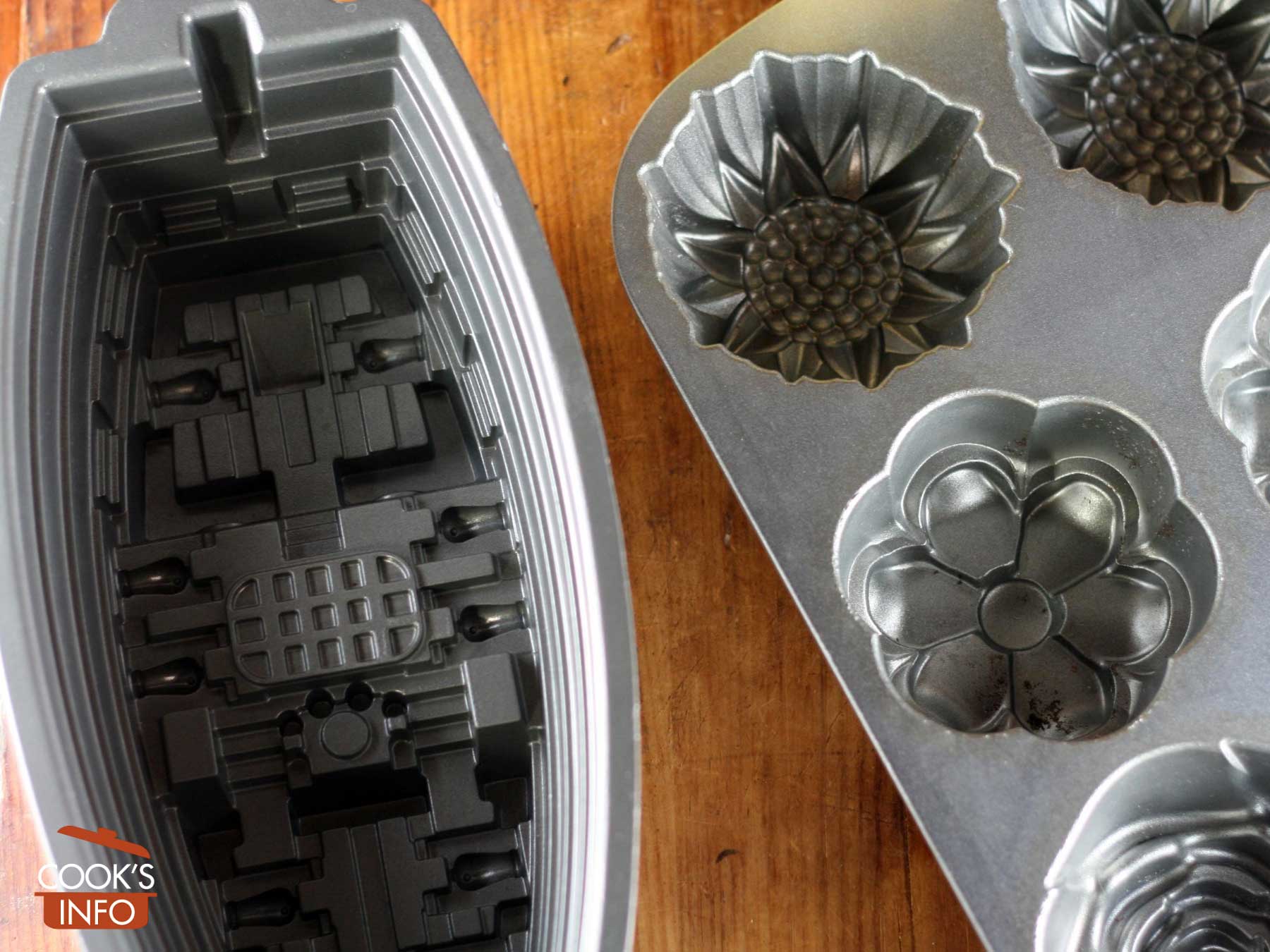 Bundt pans need to be well-greased and well-floured. Use a pastry brush to grease or butter the pan with, to make sure you get every single small corner and ridge. Some people advise using a mixture of shortening and oil. Then toss with a small amount of flour inside, turning the pan so that every nook and cranny is coated with flour.

Non-stick ones need to be greased and floured despite the fact that they are non-stick. As the non-stick pans age, the non-stick may get less non-stick during use. Even with new non-stick ones, though, it’s important: the flour gives the batter something to cling to as it rises during baking. The flour might not stick well to all areas of the pan, but do what you can.

Some people give the following trick to get the cake out intact: when the cake is done, as soon as you remove it out of the oven, set the pan (right-side up) on a tea towel in the sink that has been doused with boiling hot water. Let it stand there for 10 to 20 seconds, then take the cake out of the sink, and invert it on a wire cooling rack right away.

Bundt pans need to be handwashed. 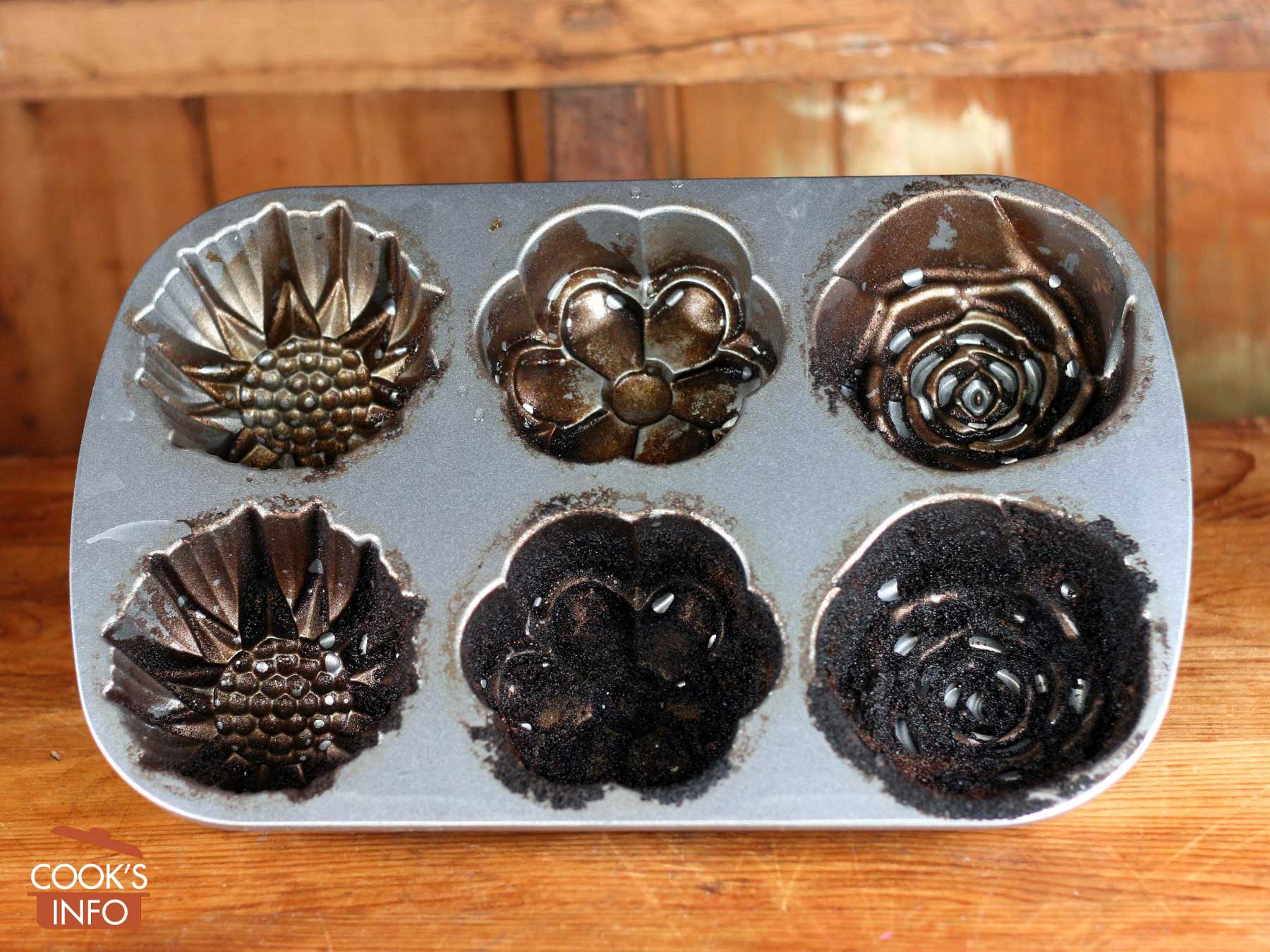 Bundt pans can be notoriously difficult to extract the finished baked products out of. © CooksInfo / 2014

Bundt pans were created by H. David Dalquist (born 1918; died Sunday, 5 January 2005 in Edina, Minnesota) by taking a “Kugelhopf” pan, and remodelling it in modern materials for America.

Dalquist had earned a BA in chemical engineering from the University of Minnesota, worked for US Steel company for two years, and enlisted in the US Navy, serving on the destroyer USS Swanson as a radar technician. In 1946, he married his wife Dorothy; they would have four children. In the same year, he founded a company called Northland Aluminum, and made Dorothy his business partner. They started a kitchen product line called Nordic Ware®. The first product Nordic Ware started selling at its inception in 1946 was rosette irons.

In 1950, some women in the Minneapolis Chapter of Hadassah (a Jewish woman’s charitable group) were trying to recreate the “Kugelhopf” cakes that their mothers and grandmothers had made back in Europe, but they couldn’t buy the right Kugelhopf pans anywhere. These were round, wreath-shaped cake pans with a hole in the middle; the pans were used to make a German cake called “Bundkuchen” (aka “Kugelhopf.”) Some members had some Kugelhopf pans, made of ceramic or heavy iron, but they wanted them in a lighter metal. Rose Joshua and a few other ladies from the Minneapolis Chapter took a Kugelhopf pan to Dalquist. They asked Dalquist if he could recreate what Rose called a “bund pan” out of aluminum. He did, and also made the ridged-design a more evenly spaced one to denote where the cake slices should be cut.

Dalquist decided to call his a “Bund” pan, based on what Rose had called the cake.  In order to get a trademarkable name, he added a “t” to the end of it, making the name “Bundt®”. He also patented his design of the pan. [1]It’s owing to a misunderstanding of the name of the cake that some food writers attribute to it another meaning of the word “Bund”, meaning “union”, inferring that Dalquist was referring to the women’s organization Hadassah.

By the time of his death in 2005, his company had sold more than 50 million of the pans. For years afterward, he had the company donate the production seconds to the Minneapolis Chapter of Hadassah, which they then sold to raise money for charities in Israel. Dorothy invented recipes for the pan, and did the food styling in her own kitchen for the photo shoots to promote the pan.

Sales were slow and steady until 1966, with most occurring in department stores in Dalquist’s area. In that year, though, Dalquist’s world would be turned upside down by the Pillsbury Baking Contest. Ella Rita Helfrich’s winning entry, her “Tunnel of Fudge Cake“, was created with one of Dalquist’s Bundt pans. Pillsbury’s was inundated with more than 200,000 requests from people asking where to buy the pans. David and Dorothy had to switch their company to a 24 hour production schedule in an attempt to meet the demand, pumping out 30,000 a day.

In addition to Pillsbury ingredients, the “Tunnel of Fudge Cake” recipe also called for Land O’Lakes brand butter. The Land O’Lakes company (of Minneapolis, Minnesota, right near Nordic Ware) ran ads in newspapers across America, giving the recipe, promoting the role of its butter in the cake, and offering a special deal on Bundt pans: “With the special coupon on the Land O’Lakes Butter package and only $3.00, you can get the authentic Teflon-coated [2]In the late 1960s, Nordic Ware added “Teflon II” coated interiors to their pans. Bundt Pan (with nylon spatula) in which to bake your “Tunnel-of-Fudge” Cake. ($5.00 value)” [Ed.: you actually needed two Land O’Lakes guarantee panels.]

In 1970 (or 1971), Pillsbury starting producing special boxed cake mixes just for Bundt pans. They licensed the use of the Bundt name for these mixes. These special Bundt mixes were discontinued around 1998.

Dalquist went on in 1980 to also create a portable carousel platter for microwaves. He called it the “Micro-Go-Round.”

His son David later became president of the company and still was as of 2020.

“The Bundt pan was originally used for pound cakes. This cake gets its name from the fact that the ratio of ingredients is a pound of flour, a pound of shortening, a pound of sugar, and a pound of eggs. The secret to obtaining a fine, rather compact grained cake is the creaming of the shortening and sugar, the gradual adding and beating in of the eggs (which act as the liquid) and the folding in of the flour. We have included some recipes of this type in our book. However, many pound cakes today are actually modified pound cakes as liquid and baking powder have been added to the basic formula…” — Dorothy Dalquist, ed. “Over 300 Delicious Ways to Use Your Bundt Brand Fluted Tube Pans.” Northland Aluminum Products, Inc.; 1973.

A Bundt cake was featured in the movie “My Big Fat Greek Wedding”. The Greek mother character was bewildered to be handed a cake with a hole in it. She decorated it with a potted flower in the middle.

This web site generates income from affiliated links and ads at no cost to you to fund continued research · Information on this site is Copyright © 2022· Feel free to cite correctly, but copying whole pages for your website is content theft and will be DCMA'd.
Tagged With: Bundt Cakes, Cake Pans