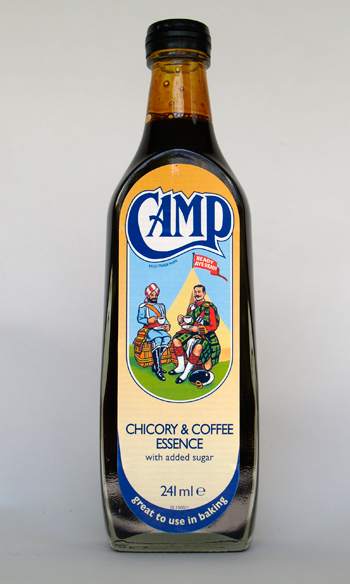 Camp Coffee is a black, concentrated coffee-flavoured syrup sold in the UK and in Canada.

The syrup is 26 percent chicory root, 4 percent coffee, and sugar and water.

It is made by McCormick Foods in Paisley, Renfrewshire, Scotland.

Camp Coffee comes in a square-shape glass bottle, with a very decorative label. The bottle itself has become a bit of a cult item in people’s memories.

In many ways, leaving aside the fact that there wasn’t much coffee in it, Camp Coffee was the first instant coffee. It was carried throughout the British Empire, as the bush was beaten back in the name of God and Queen.

It was created in 1876 by or under the direction of a person named Campbell Patterson, owner of the Robert Campbell Paterson company. Reputedly, the Gordon Highlanders requested the company to supply them with a coffee drink that could be easily served up from campaign field kitchens in India.

At the beginning, the chicory for it was grown in Dunnington, Scotland.

The man on the label in full highland outfit is reputedly a Sir Hector MacDonald, a hero of battles in India. He is drinking a cup of Camp Coffee.

A flag with the words “Ready aye ready” flies from his bell tent, and a turbaned Indian who has just served him stands by.

This web site generates income from affiliated links and ads at no cost to you to fund continued research · Information on this site is Copyright © 2023· Feel free to cite correctly, but copying whole pages for your website is content theft and will be DCMA'd.
Tagged With: Coffee, Scottish, Scottish Food