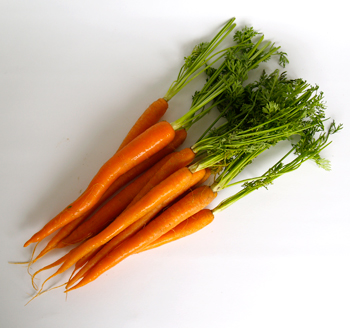 Carrots are a root vegetable that can be eaten raw, cooked, or preserved. They grow easily, store well, and are a staple in many of the cuisines of the world.

Big carrots often have tough centres. Carrots that have begun sprouting white roots have been in storage a long time. Big, old carrots — often described as woody — are actually in fact just that. They will have a large amount of ‘lignin’ in them: lignin is the substance that makes wood wood.

If you are going to be grating carrots to be incorporated into a recipe, or making a soup or stew of them, the bagged carrots are fine. Otherwise, if they are to be a feature on their own, try to buy them with the greens still attached, as they should be fresher and sweeter, and try to use in up in a few days. But avoid any on which the top part of the actual carrot is green, as they might be slightly bitter.

Carrots grow best in fluffy, loose, stone-free soil, to give them an easy and clear path in growing downwards. Clay soils need a good amount of peat moss worked in.

The taste of many carrots is best in the fall, after a few fall frosts, which helps to make their taste sweeter and milder.

Unless the carrots are very old, there’s no need to peel them for cooking or freezing. Just rinse and scrub them lightly with a vegetable brush: this will preserve the many nutrients just below the skin.

If you are going to serve carrots raw, cut them into strips and plunk into cold water to firm them up even more. For a bit more interest, put a slice of raw onion in the water. Though if you are contemplating serving your guests a plate of raw veggies accompanied by onion soup mix dip in a bread bowl, you are hereby served fair notice that it might take more than an onion slice in the water to peak anyone’s interest.

If you only have woody carrots to work with, it best not to try to serve them to people only lightly cooked in an Asian fusion style. Your guests might as well be eating chips of orange plywood. These old carrots need a reasonable boil, or better yet, to be made into a lovely carrot mash with cream and butter.

For the colour and sweetness on a plate, another orange vegetable such as yam, sweet potato, a squash, etc.

Good source of vitamin A. Also contain some protein, carbohydrate, folacin and fibre.

Carrots do not lose very much of their nutritional value during cooking. In fact, some argue that well-cooked carrots are more nutritional than raw ones, as cooking breaks down the lignin in carrots, making more of the nutrients available to our bodies. A 2007 study found that boiled carrots had the highest level of carotenoids available for the body to use in making Vitamin A. Additionally, boiling only destroyed a small amount of the Vitamin C in carrots: 100g of carrots (raw) 31mg Vitamin C. Boiled – 28mg Vitamin C. Steamed – 19mg Vitamin C. [1]

Despite what government health departments told people during the Second World War, there is no relation between eating carrots and seeing better in the dark. The British government invented that myth deliberately to encourage people to fill up more on carrots. There is an eye condition though, called “xerophthalmia”, which can develop owing to lack of Vitamin A, and cause subsequent blindness.

Instead, it’s actually leafy greens that contain lutein and zeaxanthin that do something for your eyes by helping to protect against age-related macular degeneration. Good vegetables for this include spinach and kale.

To store fresh bunched carrots, twist off the leafy green tops as they will draw off moisture and nutrients from the carrots. Place in plastic bag and refrigerate for 10 days to 2 weeks (carrots that have come with their tops on may need to be used up sooner than those that came packed tops off in cello bags.) Don’t store in with apples or pears, as the ethylene gas they give off can give carrots a bitter taste.

Plunge into cold water to cool. Then drain well, pack, and freeze. 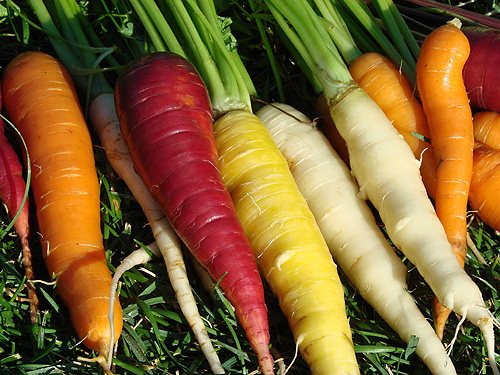 Carrots of many colours
© Michelle Mattern

Carrots are native to Afghanistan. Wild carrots had (and still have) scrawny roots compared to the fat roots obtained from cultivated carrots. Early varieties were red, purple or black. The orange variety of carrots is a modern variety, developed in Holland only in the 1600’s, where it was perhaps popular because it was the colour of the House of Orange.

The Romans certainly brought carrots with them to England, but as most food history credits their re-introduction to England with Flemish refugees during the reign of Elizabeth I, it is uncertain what happened to the carrots of England in the intervening period. In any event, the mid 1500’s are when carrots took off again in England. Queen Elizabeth, reputedly presented with some carrots and some butter as a present, sent them off to her kitchen, and a kitchen classic was born: buttered carrots. During the ensuing reign of James I (James VI, pace Scottish readers), its popularity grew to the point where ladies would stick carrot ferns in their hair.

The orange carrot became the popular one not just because of its jaunty colour, but also because purple ones turned brown and mushy when cooked.

Carrots were brought to America, and some escaped into the wild where they became the wildflower now known as Queen Anne’s Lace.

Purple ones are making a bit of a comeback as a specialty vegetable. Thanks to continued development, the colour is attractive, and stays when cooked, and they are very sweet and juicy.

Carrots sold in plastic bags are known in the trade as “cello carrots” because the first carrots be sold packaged, without their green tops attached, were sold in the 1950s wrapped in cellophane.

“Large, naked, raw carrots are acceptable as food only to those who live in hutches eagerly awaiting Easter.” — Fran Lebowitz (American writer)

Damrosch, Barbara. The beauty of ugly carrots. The Washington Post. 18 May 2011.

This web site generates income from affiliated links and ads at no cost to you to fund continued research · Information on this site is Copyright © 2023· Feel free to cite correctly, but copying whole pages for your website is content theft and will be DCMA'd.
Tagged With: Carrots