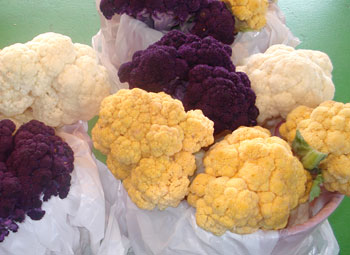 Cauliflower belongs to the cabbage family. Though its name means “cabbage flower”, it is not just a flowering cabbage. It is formed from natural flowers on the cauliflower plant which have been encouraged over centuries to gather together and create a large mass of what is called “florets” or “curd.” It has also been described as looking like a bridal bouquet. The white part is called the curd. If left to grow on its own, the curd will be a light green. Farmers, however, fold and tie the leaves of the plant over the curd to keep the sun off it to blanch it. (Varieties have now been developed where the leaves fold over on their own, saving this work.)

Brown spots on cauliflower that you purchase in stores have likely resulted from moisture or condensation on the cauliflower; if the rest of the cauliflower is fine, just scrape these off. Yellowish spots, however, may indicate that the vegetable is quite old and is starting to decay.

These days, you are very likely to see cauliflower served raw on a crudité platter. You mustn’t say anything to the host; just resolve that you will never inflict the same on your guests.

If the cauliflower is young, it is also delicious just steamed or microwaved and served with butter. One of the tastiest ways of serving cauliflower comes from India, as a curried dish. In some areas of Italy, lightly-cooked cauliflower is combined with garlic, olive oil and capers. Breaded and fried cauliflower is also nummy, as is cauliflower served with a lemon butter sauce with chives. It is also great as the base for a thick, hearty soup.

Cauliflower should not be planted near runner beans, spinach or tomatoes.

When buying, avoid cauliflower with yellowing spots or wilted leaves. The florets should be tightly closed, not open. 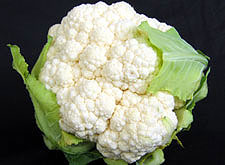 To prepare cauliflower, remove the leaves and cut out and discard the stalk and core. Then cut the cauliflower into small or medium-sized chunks, depending on what you are going to be using it for. Wash the florets.

You want to cook cauliflower as little time as possible to preserve the nutrients and maintain a good texture, but also because longer cooking times develop that cabbagey smell that lingers in your kitchen. As well, the longer you cook cauliflower, the more it breaks down and the more watery it becomes. It does, however, need some cooking time to develop what flavour it does have.

Adding a teaspoon of lemon juice to the cooking water will help keep the cauliflower very white.

For the French method of cooking cauliflower white, see the entry for “Au blanc.”

Cauliflower is high in vitamin C, folic acid and fibre.

Store unwashed either unwrapped or in a perforated plastic bag in refrigerator for up to five days. After that, it will develop a strong odour.

Cauliflower can be successfully stored as a high-quality frozen product.

The cauliflower is then blanched to destroy spoilage enzymes which would cause the product to deteriorate even though frozen.

You may water or steam blanch.

Regardless of how you blanched, plunge in cold water, drain, package, and freeze.

Cauliflower originated somewhere around the Mediterranean or Asia Minor. The Egyptians were growing it in 400 BC. The Romans grew it.

Cultivation of it was pretty much restricted to the Italian peninsula until the 1500s, at which time it made its way up into France, and over to America in the 1600s, though it was not developed commercially there until about the 1920s.

Sales of cauliflower fell 35% in the UK during the period of 2001 to 2011. In response, growers have begun growing brightly-coloured varieties to be sold in mixed rainbow packs, in an attempt to revive consumer interest in the vegetable.

“Training is everything. The peach was once a bitter almond; Cauliflower is nothing but cabbage with a college education.” — Mark Twain.

“Cauliflower” comes from the Latin words caulis (cabbage) and floris (flower). In French, that became “cole florie”, which became our word “Cauliflower”.

Some people pronounce the word “call-a-flower”; others will say it “call-ee-flower”.

Eat your greens… and pinks and yellows: How Tesco is trying to get children to eat cauliflower by making it more colourful. London: Daily Mail. 1 August 2011.

This web site generates income from affiliated links and ads at no cost to you to fund continued research · Information on this site is Copyright © 2023· Feel free to cite correctly, but copying whole pages for your website is content theft and will be DCMA'd.
Tagged With: Ancient Egypt, Cauliflower, Roman Food