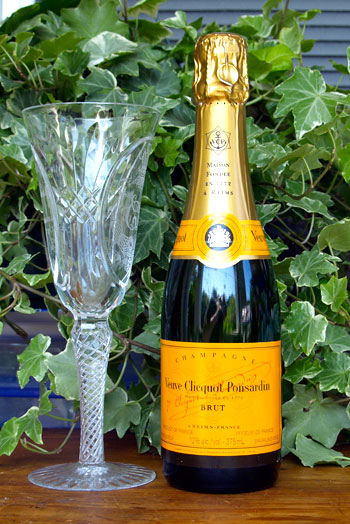 Champagne is a sparkling white wine.

The grapes used to make champagne are the same, for the most part, as those used to produce sparkling wines all over the world. What’s reputedly different about the sparkling wine made in the Champagne area of France is the climate and the techniques used; what’s assuredly different is that the producers in Champagne have made sure they’re the only ones legally allowed to call their product “champagne.”

Most champagne comes with an indentation (called a “punt”) in the bottom of the bottle. This is designed to allow any sediment to settle. Most bottles are also tinted green. The one exception is bottles for Louis Roederer champagne. The bottles are clear, and the bottom is flat.

Many food writers will say outright that it is wrong to prefer sparkling wines produced elsewhere in the world to champagne. Many people who actually prefer Australian or New Zealand or Spanish sparkling whites have been shamed by them — and by the champagne marketing machine — out of buying and serving them because they’re not champagne.

Champagne tends to have somewhat fewer calories than other types of wine.

A bottle of Veuve Clicquot champagne has about 9 grams of sugar per bottle. That reflects changing tastes: in the 1830s, the company used about 100 grams of sugar per bottle. In Russia, that wasn’t even sweet enough: some would serve a glass with a teaspoon of sugar. [1]Nordstrom, Louise. World’s oldest champagne uncorked after rescue from shipwreck. Associated Press. 17 November 2010.

Champagne was the first wine to appear commercially in the cork-stoppered bottles that we are familiar with today. [Note, though, that monks at the St-Hilaire Abbey near Limoux produced a sparkling wine in cork-stoppered glass flasks in 1531.]

Prior to 1728 in France, it was illegal to sell transport wine in bottles for sale. It could be transported in other containers such as casks and flasks, but not bottles. A decree on 25 May 1728 from Louis XV finally allowed the commercial transport of bottled wine in France, though the decree specified that the bottles should be sold in basketed quantities of 50 and 100 bottles.

The ability to sell wine in bottles was of course vital for a sparkling wine such as champagne.

The first merchant to act on this was Nicolas Ruinart in September 1729.

Churchill, who lived to be 91, drank a bottle a day of Pol Roger champagne. When he died, the Pol Roger family issued bottles with a black border of mourning around the label.

Champagne is not the oldest sparkling wine. That is Blanquette wine.

A champagne glass actually has to be made rough enough inside (though imperceptible to us) that it will contain hundreds if not thousands of tiny “nucleation sites” — rough places where the liquid is repelled just enough to allow the carbon dioxide in it to go back into a gas, and form a bubble. Trails of bubbles will appear to move upward from several definite places inside the glass, because those will be the best “nucleation sites.” A wet, previously used glass will have more of those rough spots filled in with liquid. Thus, a second glass of champagne in the same glass will appear to be less bubbly, as there are fewer spots for bubbles to form. [2]O’Hare, Mick. Food science and food myths: James Bond may have been onto something. London: Daily Telegraph. 5 October 2010.

“Champagne, to my mind, is the only wine that ought to be to be handed round, because so few gentlemen know how to pour it out properly.” — Lady Constance Chesterfield, in: Sala, George Augustus. Lady Chesterfield’s Letters to Her Daughter. London: Houlston and Wright. 1860. Page 97.

The Romans named the Champagne area of France “campania”, because they felt its flatlands resembled Campania in Italy.

This web site generates income from affiliated links and ads at no cost to you to fund continued research · Information on this site is Copyright © 2023· Feel free to cite correctly, but copying whole pages for your website is content theft and will be DCMA'd.
Tagged With: Champagne, French Food