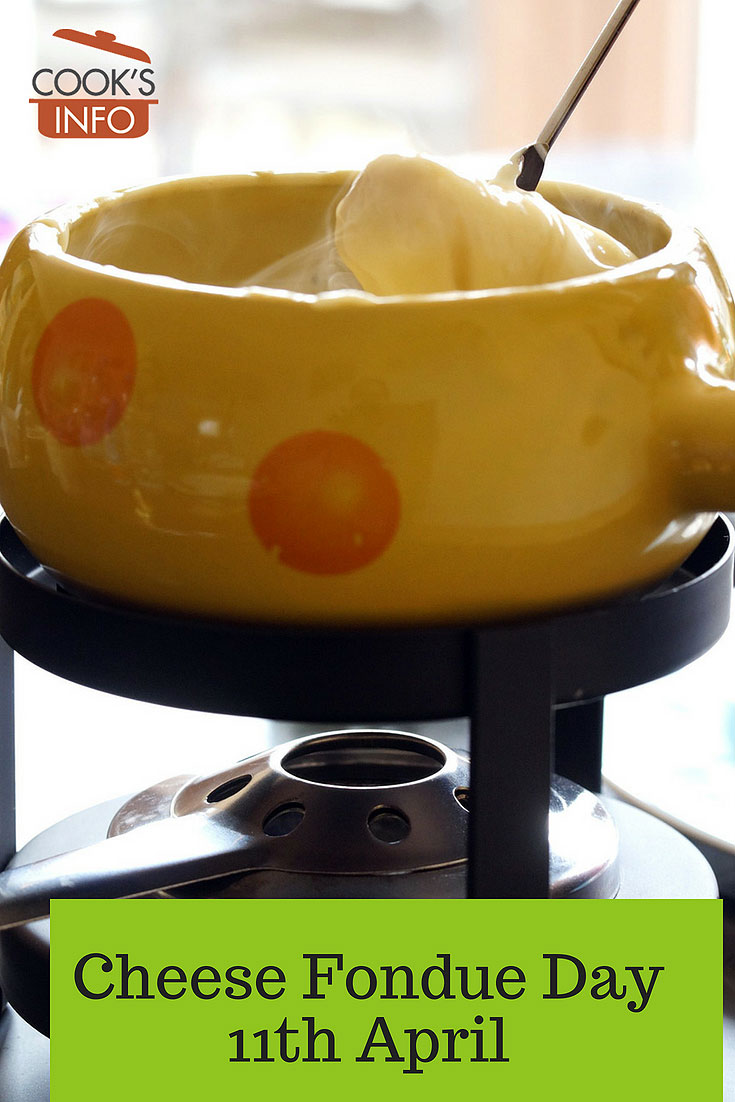 Finally, a holiday to celebrate stale bread and melted cheese!

In the northern hemisphere, spring is often fickle in its youth, wandering from warm sunshine one day to chilling showers or even damp snow the next. A chilly spring April evening is a nice day to have a special, warming dish at the table, that isn’t as full-out hearty as the dishes that got us through the winter. A cheese fondue (often referred to as a Swiss fondue) fits the bill perfectly.

There’s still something wonderfully cheesy about a cheese fondue. In the 1970s, they were so de rigeur for the smart, bee-hived hairdo set that everyone had a fondue pot in colours of harvest gold, brown or avocado green, or in stripes thereof, with smart little fondue forks that seemed to get used more in pickle jars that they did in the pot. A North American revival was attempted by some foodie fashionistas at the turn of the 21st century, but it didn’t really catch on, leaving fondue an iconic kitsch food that just happens to also be really good food.

If you don’t have a fondue set, try improvising with wooden skewers from the dollar or pound store, and with the fondue in a heavy ceramic bowl that will both hold the heat when you pour it in, and that is microwave safe so the fondue can have a quick warming zap halfway through if needed. When using a proper fondue set with heating fuel, always handle the fuel with care.

Resist the temptation, though, to use regular table forks as dipping forks. People are bound to get mixed up over what fork they’re eating with, and which one they’re dipping with, and before you know it — ugh!

And to really highlight the kitschiness of the day, see our Eazy Cheezy Fondue recipe. Even if you recoil in horror (we did), you’ll have to admit it sure captures the “cheezy” spirit of the day! We also have a classic cheese fondue recipe.

Note that there’s a difference between cheese fondues and meat fondues!

Note: Some people say that Cheese Fondue Day should be observed on June 4th. We, however, back those who plump for the April date — who wants fondue when it’s salad weather?

The earliest print mention of a Cheese Fondue Day in April that CooksInfo has seen dates from 2010 in Ohio:

“The Melting Pot will share more than fondue with a couple nonprofit cancer support organizations on Sunday, April 11. In honor of National Cheese Fondue Day, the Symmes Township fondue restaurant will donate $10 from every cheese fondue purchase that day to the Wellness Community… By celebrating National Cheese Fondue Day in this way, our guests will be able to feel like an integral part in making a difference for our community,” he added. The Melting Pot has more than 146 restaurants in 37 states and Canada. The menu includes cheese fondues, salads, fine wines and chocolate fondue desserts.” — Richardson, Rachel. Fondue for a cause on April 11. Cincinnati, Ohio: The Cincinnati Enquirer. Saturday, 20 March 2010. Page 12, col. 4.

“Come see and learn the continental art of fonduing as demonstrated by George Stauffer, whose family has spent a lifetime in the cheese business. Complete line of fondue dishes and accessories available for your next party.” 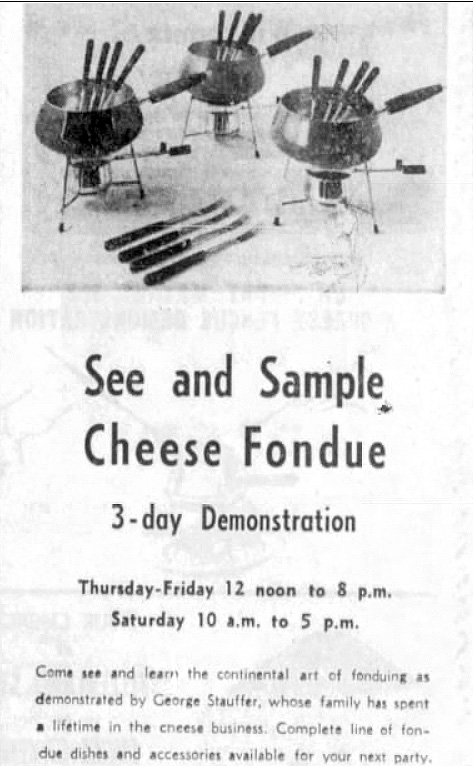