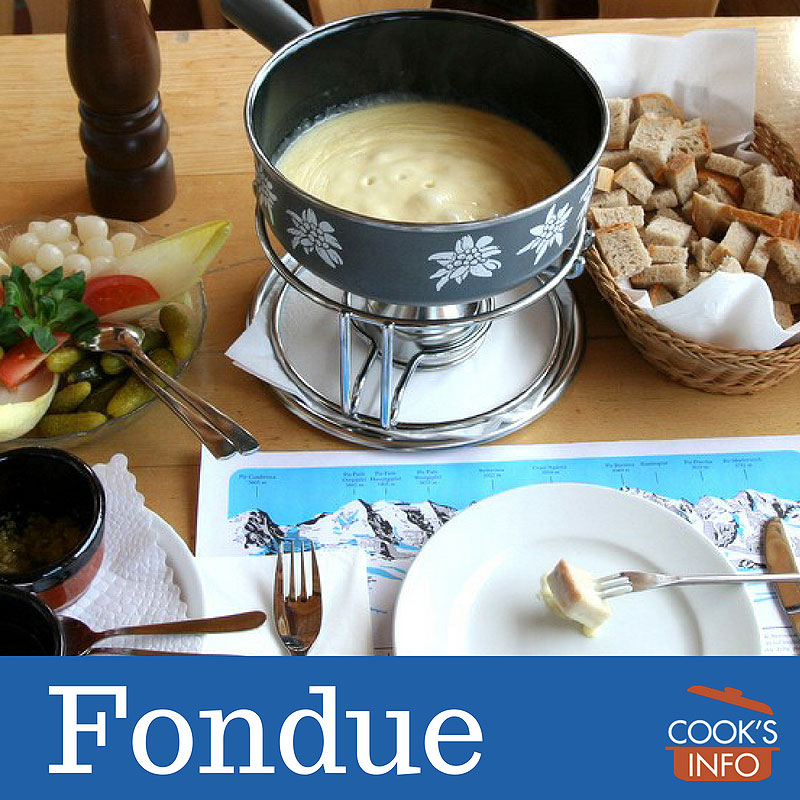 In general, a fondue can mean any food cooked in a pot, or dipped into a sauce in a pot. The pot is in the centre of the table, shared by everyone eating. The diners use long forks with which to handle the pieces of food going into the pot.

If the food is cooked in the pot, the cooking medium can be boiling stock or hot oil. The broth or oil should be simmering, not boiling. Usually, it is meat that is cooked in the pot, though potatoes, other vegetables and seafood, can also be cooked. These fondues are often referred to as “cooking” fondues. For “cooking” fondues, play it safe: make sure that you are using a very stable stand.

Cooking in oil is considered more of an Asian-style fondue now, with the exception of beef fondue aka fondue bourguignonne. (See below.)

If the food is dipped in a sauce in the pot, the sauce might be a cheese sauce for a savoury course, or a sweet sauce such as a chocolate one for a dessert course.

Fondue pot sets come with the pot, a stand on which it sits, plus a burner which goes underneath the stand to heat the pot. The sets also include forks that usually have colour-coded handles, to help people remember which one is theirs.

There are at least five types of heat source that can be used with the stands. Each set will specify the fuel that can be safely used with it. Never refuel your burner while a flame is still going.

Alcohol can be used for both high and low heat. You don’t burn Scotch in here: you use only “denatured alcohol” or “isopropyl alcohol.”

Butane can be used for both high and low heat. You actually fill up a small tank underneath the stand, and the flame burns from that.

Electric fondue sets may not produce as high a heat as will alcohol or butane sets. You may need to start your broth or oil off on the stove, and then transfer (carefully) to the fondue pot.

Sterno comes as a solid fuel in small tins, or as a pourable gel fuel in bottles that you pour into a refillable burner that came with your set. Sterno is okay for “cooking” fondues, but it won’t get as high heat as alcohol or butane. You may need to start your broth or oil off on the stove, and then transfer (carefully) to the fondue pot. 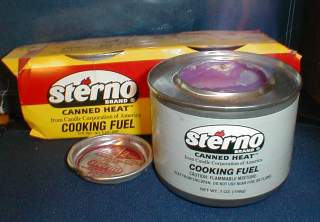 Teas light candles are good only for keeping a chocolate fondue warm. They won’t give enough heat for any other type of fondue.

You should actually melt the chocolate first in a microwave or over a double-boiler first — or be prepared to wait a long time for the heat from the tea lights to melt it. 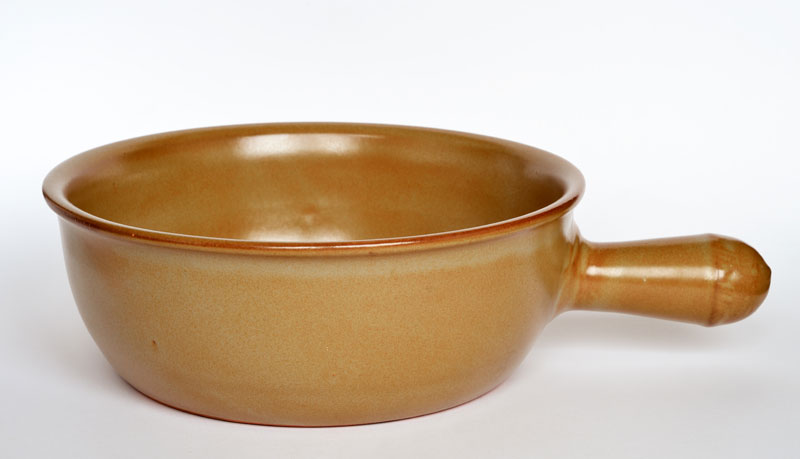 A caquelon is an earthenware pot that was traditionally used in Switzerland for cheese and dessert fondues. It’s shallow with a very wide mouth. Only wooden spoons should be used in it.

Cooking of the sauce is done on the stove top, then the pot is transferred to the table and put over a burner to keep the contents warm.

Fonduta is an Italian version of a cheese fondue, made with egg yolks and fontina cheese.

The sauce is a mixture of olive oil and butter flavoured with garlic and anchovies. It’s heated and kept warm. Vegetables are dunked into it to coat and warm them. The practice originated in the Piedmont region of Italy. Bagna cauda means “hot bath.”

A beef fondue is small pieces of beef and vegetable and cooked in hot oil.

The first documented occurrence was in America, by Konrad Egli at the Chalet Swiss Restaurant in New York in 1956.

The practice is sometimes attributed by food writers to vineyard workers in Bourgogne, France, though it’s doubtful that they were the only farm workers ever to cook food in this fashion.

Once the cheese is melted, or the oil is hot enough to cook, keep the heat low.

Too many accidents happen with fondues and spoil a pleasant evening. Fondue safely.

Some people, even those in the restaurant trade, say to avoid chilled drinks when having fondue. They believe that cold liquids can cause the melted cheese to sink in your stomach, causing indigestion.

Some assert that the Romans ate fondue. Given the vastness of the Roman Empire and that it lasted over a 1000 years, no doubt someone, somewhere, stuck meat on a fork and cooked it in a pot of boiling liquid at a table, but CooksInfo not been able to find any evidence of this being a “thing” aside from one episode in an Asterix comic book [1]René Goscinny. Astérix chez les Helvètes. Pilote Magazine 557–578. 1970.

Some sources maintain that the Swiss invented fondue as a way of using up dry cheese and bread — that they would make all their cheese (and bread!) for the winter in the fall, and that by mid-winter the cheese would be dry and need to be melted, and the bread hard and need to be softened. Others assert that there were two warring armies in Switzerland, one of which had cheese to eat, the other which had bread and wine, and that they sat down together and made fondue. More probably, Swiss fondue originated in the 1600s, as a way to use up stale bread. By the end of the 1600s, it was being served in Paris.

Fondue was very “in” in North America and in the UK in the 1960s and 70s. Even Kraft got on the fondue band waggon, with its recipes for fondues made from melted Velveeta Cheese. After those years, fondue slid into a period where it was seen as “naff”. By the start of the 2000s, it is no longer completely seen as “naff”, but not really in vogue again, either.

Chocolate fondue was invented in the 1960s.

“Fondue is a soup dish, and consists only in frying eggs in cheese in proportions revealed by experience. I will give the recipe. It is a pleasant dish, quickly made and easily prepared for unexpected guests. I refer to it here only for my peculiar pleasure, and because it preserves the memory of things which the old men of Belley recollect.

Towards the end of the 17th century M. Madot became bishop of Belley, and took possession of the diocese.

Those to whom his reception had been confided had provided an entertainment worthy of the occasion, and made use of all the preparations then known in the kitchen, to welcome my lord.

There was an immense fondue, to which the prelate paid great attention; to the surprise of all he ate it with a spoon, instead of a fork, as people had been used to do.

All the guests looked at each other with a perceptible smile on every face. A bishop from Paris, however, must know how to eat. On the next day there was a great deal of gossip, and people that met at the corners, said “Well did you see how our bishop ate his fondue? I heard from a person who was present that he used a spoon!”

The bishop had some followers, innovators who preferred the spoon, but the majority preferred the fork, and an old grand-uncle of mine used to laugh as if he would die, as he told how M. de Madot ate fondue with a spoon.

RECIPE FOR Fondue, COPIED FROM THE PAPERS OF M. TROLLET, BAILLI OF MONDON IN BERNE.

Calculate the number of eggs in proportion to the guests.
Take one-third of the weight of Gruyere and one-sixth of the weight of butter.
Beat the eggs and mingle them with the butter and cheese in a casserole.
Put the kettle on a hot fire and stir it until the mixture is perfect. Put in more or less salt in proportion as the cheese is old or new. Serve it hot, with good wine, of which one should drink much. The feast will see sights.”

Fondue comes from the French word “fondre”, which means “to melt.” “Fondu” in French means “melted.” 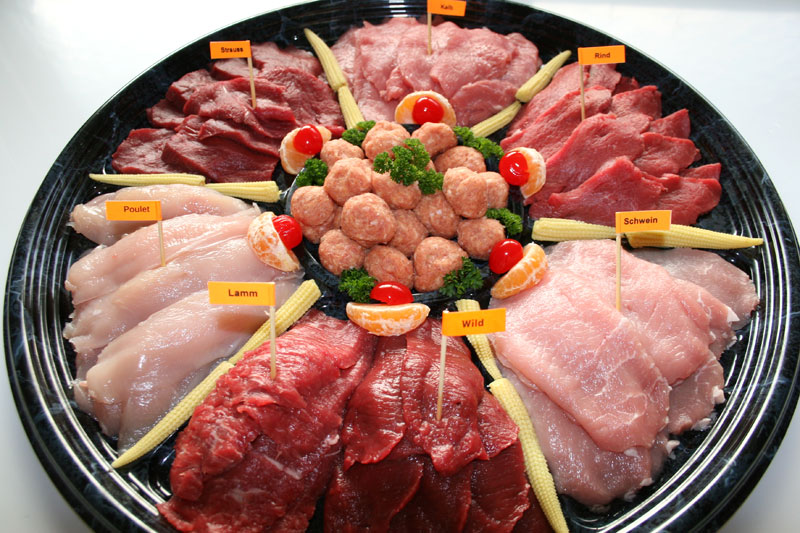 This web site generates income from affiliated links and ads at no cost to you to fund continued research · Information on this site is Copyright © 2022· Feel free to cite correctly, but copying whole pages for your website is content theft and will be DCMA'd.
Tagged With: Raclette (Meal), Swiss Food