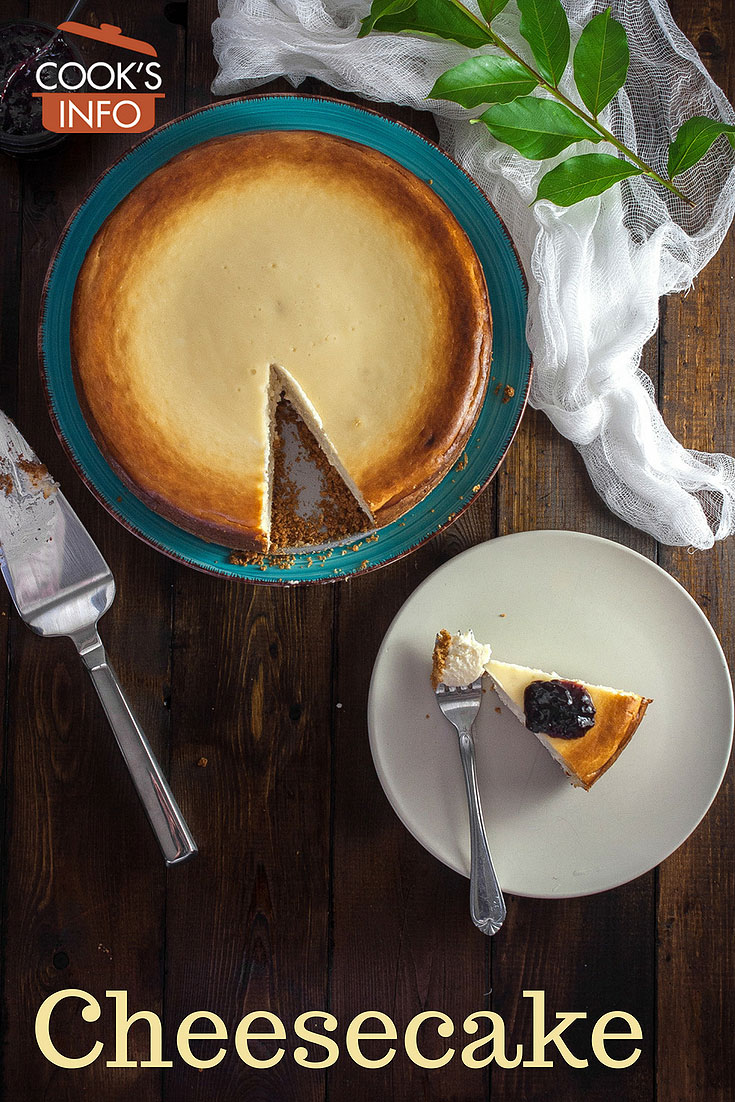 Broadly speaking, there are three types of cheesecakes:

A cheesecake is a baked cake whose featured ingredient is cheese, almost always a soft cheese such as cottage cheese, cream cheese or ricotta. Cream cheese is the most common. Sometimes it has a bottom crust; sometimes it does not.

The soft cheese is mixed with sugar, eggs and flavourings. Some people say that, with the egg and dairy, it’s essentially a baked custard, but the resulting cake is far denser than most people would picture a custard to be.

Cheesecake is often baked in a springform pan for ease of extraction from pan while preserving appearance.

It often has a topping, usually fruit.

In the UK, crushed digestives are used for the crust; in North America, graham wafer crumbs.

The texture of the cake can be coarser or creamier, depending on the recipe.

Cheesecakes are mostly thought of as desserts, but savoury ones can be made.

Some say New York cheesecake is Eastern European style cheesecake, brought over by Jewish immigrants, and attributed to the Jewish delis in New York from the 1920s onward.

Arnold Reuben (who owned the Turf Restaurant at 49th and Broadway) claimed that he developed and sold the first New York style cheesecake (using Break-stone’s brand cream cheese) while others were still using cottage cheese. Food writer Clementine Paddleford said in 1947 that Reuben used “zwieback crumbs” for a crust. (See Literature section below.)

This style of cheesecake was then taken up by Lindy’s Broadway restaurant (opened in 1921 by Leo Linderman from Berlin) in the 1940s, and from there became the definition for cheesecake in New York. Linderman had hired a German cook from Reuben, so for years rumour circulated that through the cook Linderman had stolen Reuben’s recipes.

New York cheesecake is plain. There is no flavouring added, and it is not garnished with any topping. Lindy’s restaurant in New York bakes its cheesecake inside a pastry case made of flour and butter.

Bringing the cheese to room temperature first helps ensure easier, more thorough blending. Let it sit out of the fridge in the package for 2 hours, or remove the cheese from the package, chop the cheese into chunks, spread the chunks out with some space between them in a bowl or on a plate, and let stand for 1 hour.

Cheesecake crust can stick even to non-stick pans — you’re best to also use waxed paper or parchment paper.

If you under beat a cheesecake mixture, the cake will turn out lumpy and uneven. If you over beat it, there will be too much air in it, which can cause cracking and bubbles.

Cheesecake generally has a two hour cooling period in the oven, after the oven is turned off. If you want the centre to be more moist, open the oven door during that period. For a drier centre, leave the door closed.

A cheesecake will start setting while baking when its temperature reaches 82 C (180 F).

For every degree the cake inside reaches above 93 C (200 F), the cake will start to dry out, causing it to get grainy and start cracking.

Some people use water baths to help avoid the outside getting too hot and drying before the centre starts to set. Others say it’s too hard to stop the water from finding its way somehow into the springform pan. Some people advocate baking at an oven temperature of 93 C (200 F) for up to 8 hours (sic.) This way, the cake can’t go above that temperature. 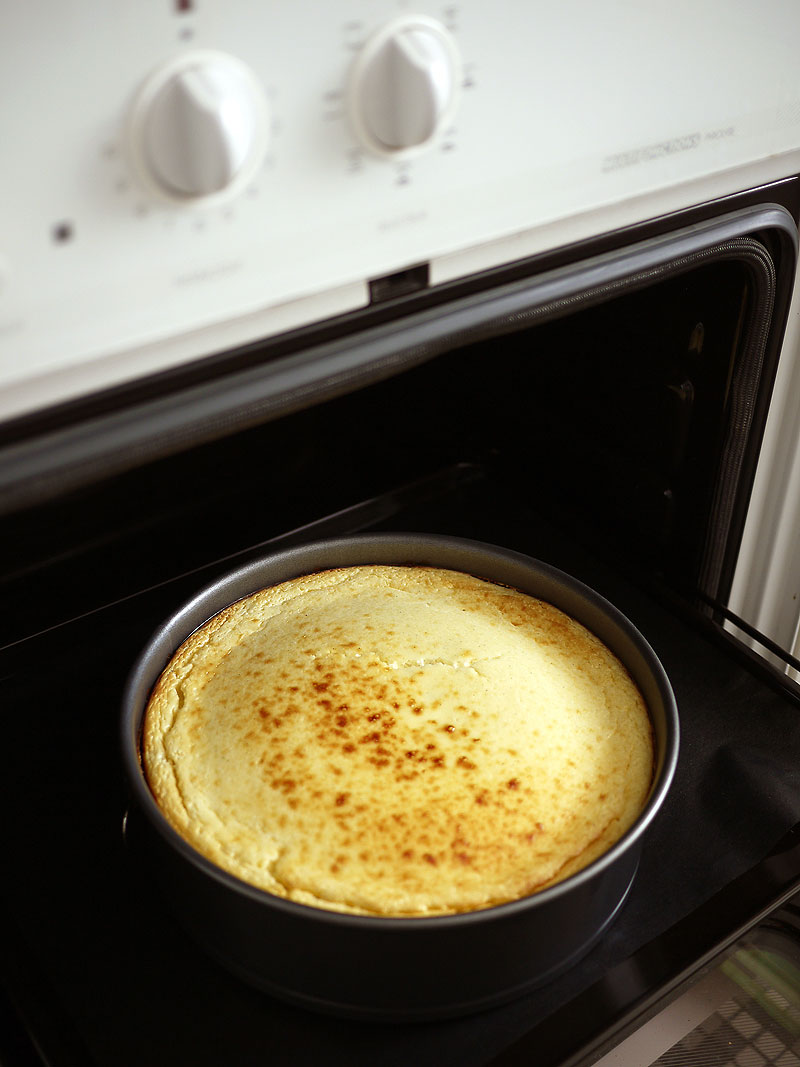 37 BC. Cato, in his book “De Agricultura”, gives a recipe for “libum” which some writers refer to as a cheesecake, though it was probably more like an unleavened cheese bread. It consists of crumbled cheese mixed with half as much flour, and one egg. The mixture is formed into a loaf and baked with leaves (often interpreted as bay leaves) under it.

1475. Platina (aka Bartolomeo Sacchi) recorded a recipe for “Torta bianca” (“white cake”), which many writers cite as a cheesecake. Though it was a dish with cheese in it, it might not qualify as what we would now call “cheese cake.” It involved grated cheese, a dozen egg whites, sugar, ginger, lard (1/2 pound) and butter mixed with milk, poured into a pie crust and baked, then sprinkled with sugar and rosewater. (De honesta voluptate, Book 8). Platina attributes the recipe to another writer, Martino de’ Rossi.

1517. Giovanni Rosselli publishes a recipe for “migliacio” in his book “Epulario” published in Venice. While the English translation, which appeared in 1598, didn’t call it cheesecake, this recipe doesn’t have it go into a crust, and would make something pretty close to what we would think of a cheesecake:

“If you will make Migliacio, for foure or five persons, you shall stampe two pounds of new cheese so new as in a manner it shall be ready to turne to milke again, then take four ounces of fine flower, eight or ten whites of Egs, and halfe a pound of Sugar, mingling all this together, and if you have not floure take crummes of white Bread grated very small, and use it in stead of flower, and take a pan without past, and put Butter into it about two fingers thicke, and let it stand on the coales until the Butter be melted, then put the composition into it with a reasonable fire both under and over it, and when it is baked take it out and strew Sugar and Rosewater upon it.”

In the 1500s, what we would call “cheese tarts” — small pastry tarts with a filling of eggs, cheese curds, and spices — were called “cheese cakes” in England.

1668. Samuel Pepys the diarist refers to “cheese-cakes”, though it can’t be certain what exactly he was referring to: “..and so, it being a fine day, we out to Islington, and there to the old house and eat cheese-cakes and drank and talked..” (Samuel Pepys, 1st February 1668.)

1669. Cheesecake is referred to as a custard-like filling in a pie crust by Kenelm Digby:

“To Make Cheesecakes. Take 12 quarts of milk from the cow, turn it with a good spoonful of runnet. Break it well, and put it in a large strainer, in which rowl it up and down, that all the whey may run out into a little tub; when all that will is run out, wring out more. Then break the curds well; then wring it again, and more whey will come. Thus break and wring till no more come. Then work the curds exceedingly with your hand in a tray, till they become a short uniform paste. Then put it to the yolks of 8 new laid eggs, and two whites, and a pound of butter. Work all this long together. In the long working (at the several times) consisteth the making them good. Then season them to your taste with sugar finely beaten; and put in some cloves and mace in subtle powder. Then lay them thick in coffins of fine paste and bake them.” — “The Closet of the Eminently Learned Sir Kenelm Digby, Knight, Opened” (ca 1669) [Editor’s note: coffins = pastry crust]

1911. Fannie Merritt Farmer, in her “Catering for Special Occasions with Menus and Recipes” (1911), page 76, lists a recipe for cheesecakes which are more like drop cookies. It’s beaten egg whites with a little flour, a little grated cheese and butter, and some cayenne pepper.

North American style cheesecake was not really known in the UK until the 1960s. It was first available there when delicatessens sprang up.

“Don’t be overlooking Reuben’s world-famous cheesecake. Before the war this honey-toned cake traveled to addresses as far apart as Bermuda, Honolulu, and London. The cake’s client list of more than a thousand names is kept by card file. This is a cheesecake of the soufflé type, its center firm like a custard. And a custard it is, being made of cream cheese lightly whipped up with eggs to a satiny smoothness; zwieback crumbs give tender walls.” — Paddleford, Clementine (1898 – 1967). Food Flashes Column. Gourmet Magazine. February 1947.

Cheesecake is also used as an expression to describe alluring pictures of attractive women. 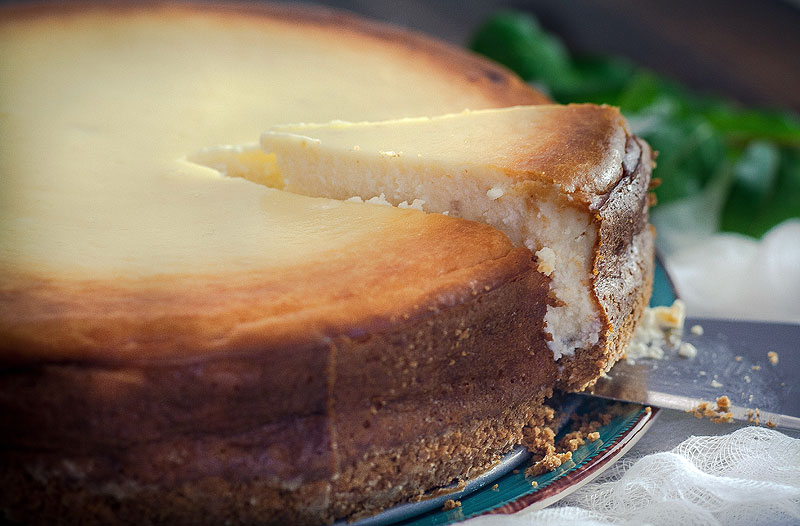