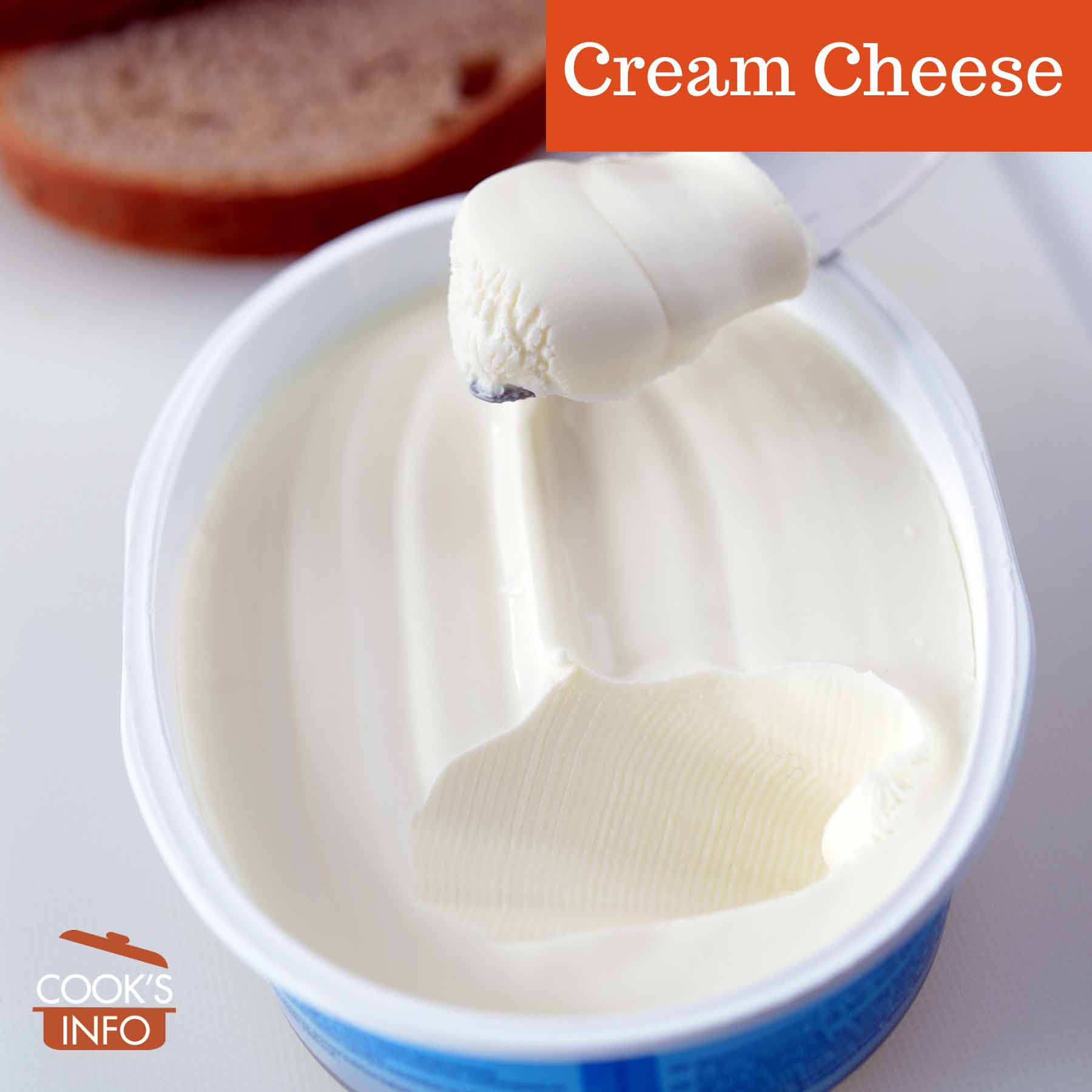 Cream cheese is a smooth, homogenous, spreadable, unripened cheese with a mild tang to its taste.

The standard cream cheese is white and unflavoured, though many different colours and flavours are now available.

Typically, it is made from cow’s milk. The legal definition of how much minimum butterfat it must contain will vary from country to country. In the United States, the minimum is 33 %. [1]”The minimum milkfat content is 33 percent by weight of the finished food, and the maximum moisture content is 55 percent by weight, as determined by the methods described in § 133.5. The dairy ingredients used are pasteurized.” — Code of Federal Regulations. 2022. Title 21 Chapter I Subchapter B Part 133 Subpart B . Section 133:133. 21 CFR 133.133(a). Accessed January 2022 at https://www.ecfr.gov/current/title-21/chapter-I/subchapter-B/part-133/subpart-B#p-133.133(a) In Canada, the minimum is 30%. [2]Cream cheese, by federal standards of identity, is a product made by coagulating cream to form a curd into a homogeneous mass after draining the whey. It must not contain more than 55% moisture, nor contain less than 30% milk fat.” — Canadian Dairy Commission. Dairy Ingredient Profiles. Cream Cheese. 6 March 2017. Accessed January 2022 at https://application.cdc-ccl.gc.ca/ddpp-ppdpl/PearsieCopy/milking/index-eng.php?id=177

“Cream cheese is defined in the USA as having a minimum fat content of 33 per cent; in Britain it must be between 45 per cent and 65 per cent (over that and it is officially double cream cheese), and in France cream cheese must be at least 55 per cent fat…” — Davidson, Alan. The Oxford Companion to Food (Oxford Companions) (p. 229). OUP Oxford. Kindle Edition.

In North American consumers’ minds, cream cheese equals cheesecake and bagels. Elsewhere, though, it is often served as a proper cheese, rather than a spread: in Italy, dollops of it are put in salads, and elsewhere in Europe it is served on cheese trays.

If a recipe calls for cream cheese, assume it means the regular, plain-flavoured cheese, though almost all recipes will tolerate you using low-fat versions.

There are cheesecake recipes that swap in tofu instead of cream cheese.

Try ricotta or hooped farmer’s cheese (though if you can’t get cream cheese where you live, you may not be able to get those, either.)

Mascarpone or Neufchâtel (though in North America these may be too expensive to use as a realistic substitute for everyday cream cheese).

In England, curd cheese is often used for cheesecakes.

Store chilled. After opening, keep it tightly wrapped and use up within a week. If mould appears, bin the cheese.

About 1872, an American cheesemaker named William Lawrence in Chester, New York state, came up with what would become American-style cream cheese. He was working with a few people who were trying to create their own home-grown version of Neufchâtel, a cheese from France used at the time in cheesecake. He called his version of cheese “Star Brand.” In 1880, the Empire Cheese Company of South Edmeston New York (near Chester) began producing it and called it Philadelphia Cream Cheese (U.S. Patent and Trademark Office registration #0392212, possibly first sold 1 September 1880). They distributed it in foil packaging, though the foil wrapping might only have begun in 1885. In 1903, the Phoenix Cheese Company of New York bought the rights and the trademark. Phoenix merged with Kraft in 1928.

In the 1940s, Kraft tweaked the production process so that the refrigerated shelf life of the cheese, which had been a few weeks, increased up to 4 months.

It was probably named after Philadelphia, Pennsylvania. At that time, good-quality food products, especially dairy, were associated with the city (before oil refineries were). There was even a phrase “Philadelphia quality.” However, only 100 miles from South Edmeston is the small town of Philadelphia, New York, halfway between Syracuse and the Quebec border, which claims it is the namesake for the cheese. (The town, like Philadelphia in Pennsylvania, was also founded by Quakers — these ones bought a large tract of land in the area in 1803.) Philadelphia, New York has one for-sure indisputable claim: Cassius Coolidge, the man who painted the picture of dogs playing poker, was born there.

Sometime in the 1920s, it was New York Jews who, in a flash of pure genius, had the idea of schmearing cream cheese onto bagels (which had never previously been done back in Europe.) And the rest is history. 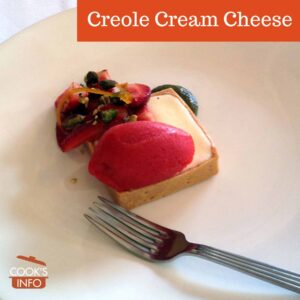 Creole cream cheese is milk curd mixed with clabber cream. It is often served with breakfast in New Orleans, used as a topping for fruit or spread on toast. 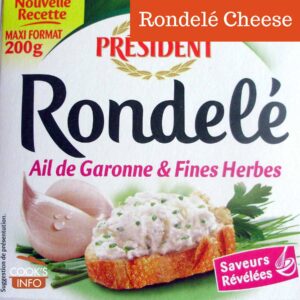 Rondelé® cheese is a smooth, spreadable cream cheese that comes in many flavours and with varying fat content. It is a snacking cheese, frequently presented on a cheeseboard with crackers.

This web site generates income from affiliated links and ads at no cost to you to fund continued research · Information on this site is Copyright © 2023· Feel free to cite correctly, but copying whole pages for your website is content theft and will be DCMA'd.
Tagged With: American Cheeses, American Food