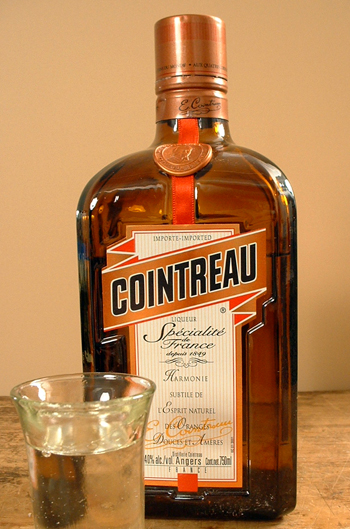 Cointreau is a liqueur made with peel from sweet oranges from Spain and/or Brazil, and peel of bitter oranges from Curaçao.

It is distilled in copper. Though it is a clear liqueur, it turns opaque when poured onto ice.

Cointreau is not as sweet as Grand Marnier.

Drain baby carrots, turn back into pot, splash with Cointreau and chopped parsley, stir and turn into covered serving dish.

Orange juice concentrate or regular orange juice that has been reduced to a thicker consistency. Grand Marnier or Triple Sec. Or, half as much orange extract.

Cointreau was invented in 1849 in Angiers, France by Adolphe and Edouard-Jean Cointreau. They had a square bottle created for them. The bottle has changed little since 1849.

Cointreau was the original orange liqueur called for in the Margarita recipe invented at Hotel Acapulco in 1948. Because Cointreau turns opaque on ice, it gave the cocktail the right amount of murkiness.

This web site generates income from affiliated links and ads at no cost to you to fund continued research · Information on this site is Copyright © 2023· Feel free to cite correctly, but copying whole pages for your website is content theft and will be DCMA'd.
Tagged With: French Liqueurs, Orange Liqueurs