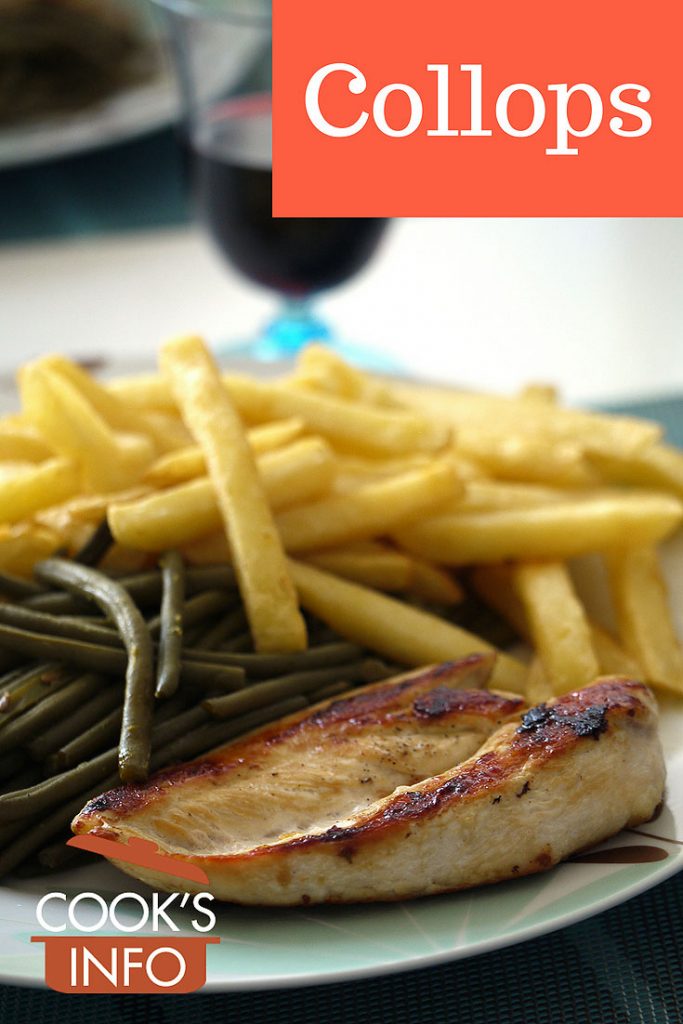 Collops are small slices of meat. The meat may be fresh or cured. The slices may be thick or thin.

In some people’s usage, it tends to refer to somewhat thick slices.

The Penguin Companion to Food notes:

“…. the word seems to have acquired in some places the general meaning of thick slice… Mary Hanson Moore records that her mother, in Yorkshire, served as ‘collops’ thick slices of potato which had been fried in dripping…”  [1]Davidson, Alan. Collops. In: The Penguin Companion to Food. London: The Penguin Group, 2002. Page 245.

Often, the meat is pounded first to make it flat, if it is not already.

The meat is usually cooked and served in this form.

While the word often is applied to bacon, collops can now be slices of any type of meat including beef, lamb, mutton, pork, veal or particularly venison. “It is still usual to speak of venison collops…” [2]Davidson, Alan. Collops. Ibid.

In practice, nowadays, the word ‘collops’ is applied to everything from aubergine (eggplant) to monkfish. 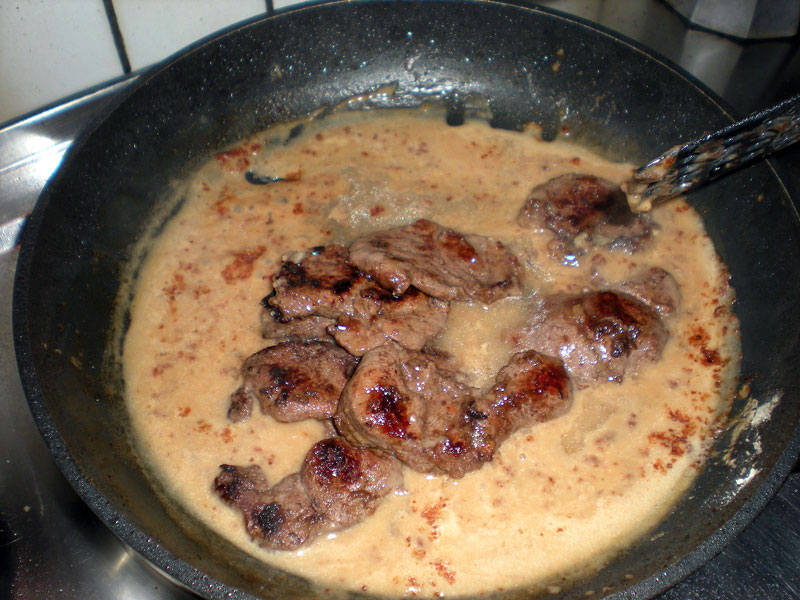 Scotched collops are collops of beef or veal that are stewed.

The Penguin Companion to Food says, “Scotch collops were a well-known dish from the 17th to the 19th centuries, although the manner of preparing them changed with the passage of time.” [3]Davidson, Alan. Collops. Ibid.

In 1700, a handwritten cookbook by an anonymous author records the following recipe for Scotch Collops:

Scotch Collops: Take some thin slices from a fillet of Veal lay them on a Board & hack them [Ed: pound them] with the back of a knife then mince a little Lemon peel & mix it with a little salt pepper Nutmeg & throw on them fry them brown in Butter. Make your sauce with a good gravy one Anchovey a glass of White Wine throw in your Collops & toss them up. You may add force meat balls & rashers of Bacon if you please.” [4]Anonymous. English cookbook, 1700. Szathmary Culinary Manuscripts and Cookbooks. University of Iowa. Libraries. Special Collections Dept. MSC0533. Page 89a.

“To dreſs Scotch collops: TAKE veal, cut it thin, beat it well with the back of a knife or rolling pin, and grate ſome nutmeg over them ; dip them in the yolk of an egg, and fry them in a little butter till they are of a fine brown; then pour the butter from them, and have ready half a pint of gravy, a little piece of butter rolled in flour, a few muſhrooms, a glaſs of white wine, the yolk of an egg, and a little cream mixed together. If it wants a little ſalt, put it it. Stir it altogether, and when it is of a fine thickneſs diſh it up. It does very well without the cream, if you have none ; and very well without gravy, only put in juſt as much warm water, and either red or white wine.” —
Hannah Glasse The Aft of Cookery Made Plain and Easy, 1747

“SCOTS COLLOPS: Cut any piece of tender lean beef into slices; beat them; brown some butter and flour in a sauce-pan; put in the beef, with some salt, pepper, and a finely-minced onion – half a minced apple is an improvement; add a little hot water; cover the pan closely, and let them stew till tender.” — Catherine Emily Callbeck Dalgairns. The Practice of Cookery: Adapted to the Business of Every Day Life (8th edition). Edinburgh: Robert Cadell. 1840.

Note that most directions seem call for the meat to be beaten or pounded.

At various times since the 1500s, ‘collop’ in English has been used to mean slices of meat — either thick or thin. In any event, it has generally meant smallish slices, as opposed to huge slabs or “steaks.”

In its earliest uses, “collop” seems to have been applied to salted, cured or preserved meat. Alan Davidson, in the Penguin Companion to Food, wrote, “Collop… had from early times the primary meaning of a rasher of salt bacon….” [5]Davidson, Alan. Collops. Ibid.

In 1849, John Brand, a Fellow with the Society of Antiquaries of London, recorded:

“…It should seem that on Collop Monday they took their leave of flesh in the papal times, which was anciently prepared to last during the winter by salting, drying and being hung up. Slices of this kind of meat are to this day termed collops in the north, whereas they are called steaks when cut off from fresh or unsalted flesh” [6]Brand, John. Observations on popular antiquities of Great Britain. London: Henry G. Bohn. 1849. Page. 62. Accessed August 2018 at https://books.google.ca/books?id=P30IAAAAQAAJ&pg=PA62&redir_esc=y#v=onepage&q&f=false 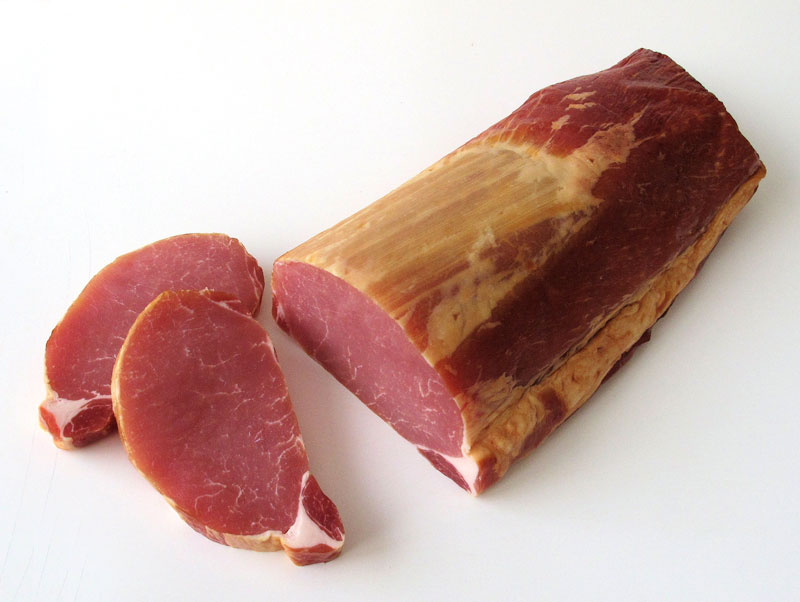 During these Elizabethan times, sugar was extremely expensive; in fact, a huge luxury. Wealthy hosts would want to show off various sugar creations. One of the favourite food items to amaze guests with were mock “collops of bacon”, made from ground almonds and sugar.

Later, the word collop came to be applied to other types of meat.

Usage of the word has not always been clear and agreed upon. In 1897, citing the St James Gazette, the Los Angeles Herald gave a recipe for “Venison Collops” which was minced venison fried loosely in a gravy of butter, flour and wine:

“Venison Collops: Mince three-quarters of a pound of venison taken from the loin; season with pepper, salt and a pinch of mace. Melt an ounce and a half of butter in a small sauce pan. Stir in an ounce of flour, and let it fry brown over the fire; fry with it a shallot chopped small; stir in the minced venison, and half a cupful of stock. Simmer for ten minutes, add half a wine glass of port wine and serve very hot.—St. James Gazette.” [7]Los Angeles Herald, Volume 27, Number 22, 22 October 1897. Page 7. Accessed August 2018 at https://cdnc.ucr.edu/cgi-bin/cdnc?a=d&d=LAH18971022.2.129

Ash Wednesday was preceded not just by Shrove Tuesday, but also by Collop Monday before that — traditionally the last day to eat meat before Lent, as the next day, Tuesday, was given up to using the last of the eggs in pancakes.

Sir Arthur Conan Doyle, in his novel “The White Company”, has his characters being served collops:

“Two of the company, who were dressed in the weather-stained green doublet of foresters, lifted the big pot off the fire, and a third, with a huge pewter ladle, served out a portion of steaming collops to each guest.”

“Alan was in excellent good spirits, much refreshed by his sleep, very hungry, and looking pleasantly forward to a dram and a dish of hot collops…. (Chapter XXII)

We’ll take a dram for luck, and as soon as this handless man of mine has the collops ready, we’ll dine…. (Chapter XXIII)

It was certainly a strange place, and we had a strange host. In his long hiding, Cluny had grown to have all manner of precise habits, like those of an old maid. He had a particular place, where no one else must sit; the Cage was arranged in a particular way, which none must disturb; cookery was one of his chief fancies, and even while he was greeting us in, he kept an eye to the collops… (Chapter XXIII)

On that first day, as soon as the collops were ready, Cluny gave them with his own hand a squeeze of a lemon (for he was well supplied with luxuries) and bade us draw in to our meal… (Chapter XXIII)

“They,” said he, meaning the collops, “are such as I gave his Royal Highness in this very house; bating the lemon juice, for at that time we were glad to get the meat and never fashed for kitchen [ed: condiments]. Indeed, there were mair dragoons than lemons in my country in the year forty-six…” (Chapter XXIII)

I do not know if the collops were truly very good, but my heart rose against the sight of them, and I could eat but little. ” (Chapter XXIII)

Collop became confused with the verb to “scollop” (“scallop”), which might lead you to ponder a connection with the name of scalloped potatoes, which are sliced. Hannah Glasse (1708-1770) in “The Art of Cookery Made Plain and Easy” (1747) lists a recipe for “Collups of Oysters”, which is oysters cooked in scallop shells. This may show the start of the confusion between the word “scollops” (as it was then spelt) and “collops.” [9]Davidson, Alan. Collops. Ibid.

Collop is the English equivalent of the French word, escalope. 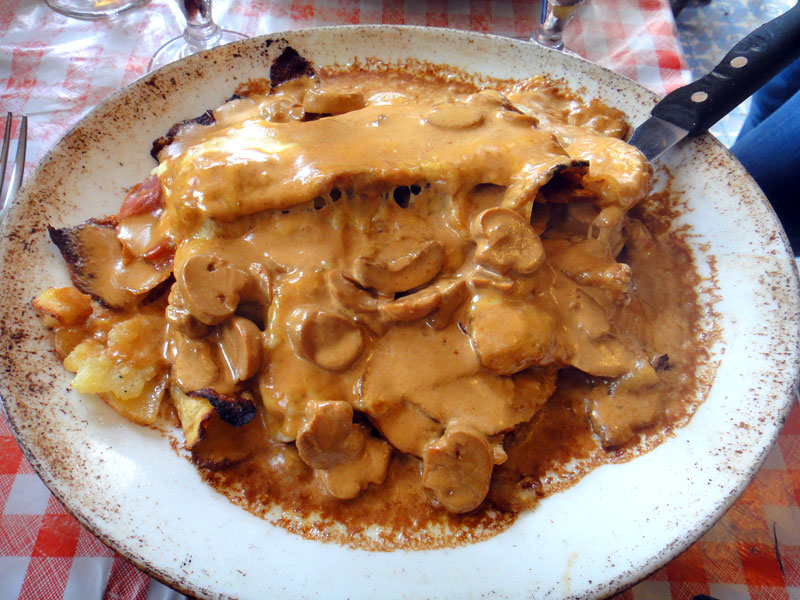 This web site generates income from affiliated links and ads at no cost to you to fund continued research · Information on this site is Copyright © 2022· Feel free to cite correctly, but copying whole pages for your website is content theft and will be DCMA'd.
Tagged With: Meat