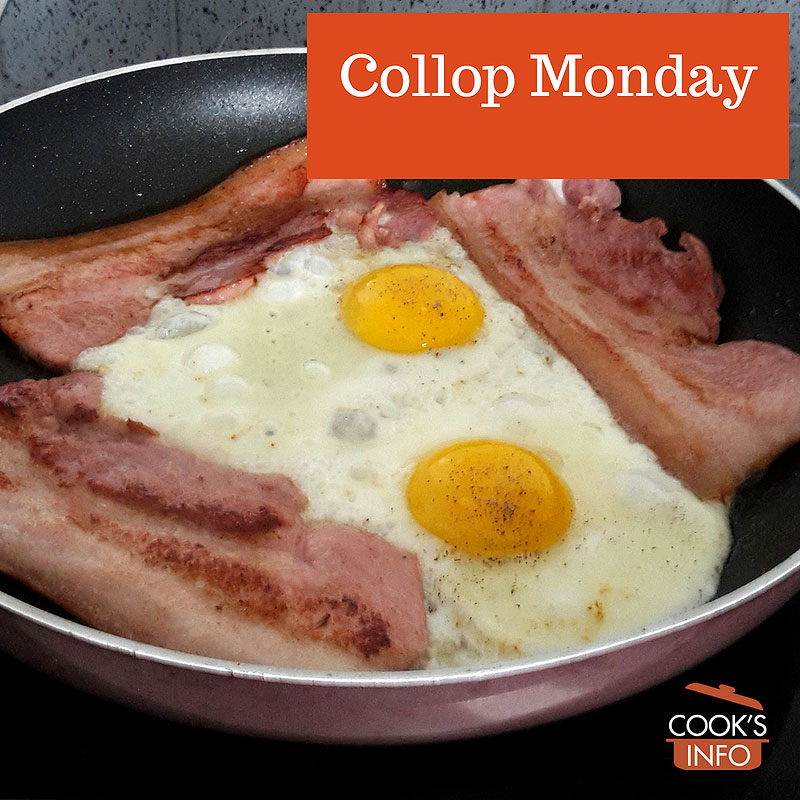 Collop Monday is the two days before Ash Wednesday, which is when Lent begins.

It is a day when slices of meat are served.

Meat was not allowed during Lent, so people wanted to use it all up before Lent began.

Consequently, breakfast on Collop Monday often consists of eggs served with collops of meat, which are somewhat thick slices of meat. Typically, the meat is bacon (English-style) that is pan-fried and served with a fried egg on top.

The day is also known for other aspects of it such as Rose Monday, Shrove Monday, Merry Monday or Hall Monday. Hall is a shortened version of “hallow”, meaning “holy.”

In Germany, it is called “Rosenmontag” (“Rose Monday”) and parades are held.

In Cornwall, England, it is called “Peasen Monday.” Pea Soup is served.

In 1849, John Brand, a Fellow with the Society of Antiquaries of London, recorded:

“Collop, or Shrove Monday. In the North of England, the Monday preceding Shrove Tuesday, or Pancake Tuesday, is called Collop Monday. Eggs and collops compose a usual dish at dinner on this day, as do pancakes on the following, from which customs they have plainly derived their names. It should seem that on Collop Monday they took their leave of flesh in the papal times, which was anciently prepared to last during the winter by salting, drying and being hung up. Slices of this kind of meat are to this day termed collops in the north, whereas they are called steaks when cut off from fresh or unsalted flesh; a kind of food which I am included to think our ancestors seldom tasted in the depth of winter. A writer in the Gentleman’s Magazine asserts that most places in England have eggs and collops (slices of bacon) on Shrove Monday.” [1]Brand, John. Observations on popular antiquities of Great Britain. London: Henry G. Bohn. 1849. Page. 62. Accessed August 2018 at https://books.google.ca/books?id=P30IAAAAQAAJ&pg=PA62&redir_esc=y#v=onepage&q&f=false

Collop comes from a Norse word, meaning a “slice of meat”.

This web site generates income from affiliated links and ads at no cost to you to fund continued research · Information on this site is Copyright © 2021· Feel free to cite correctly, but copying whole pages for your website is content theft and will be DCMA'd.
Tagged With: Ash Wednesday, Meat