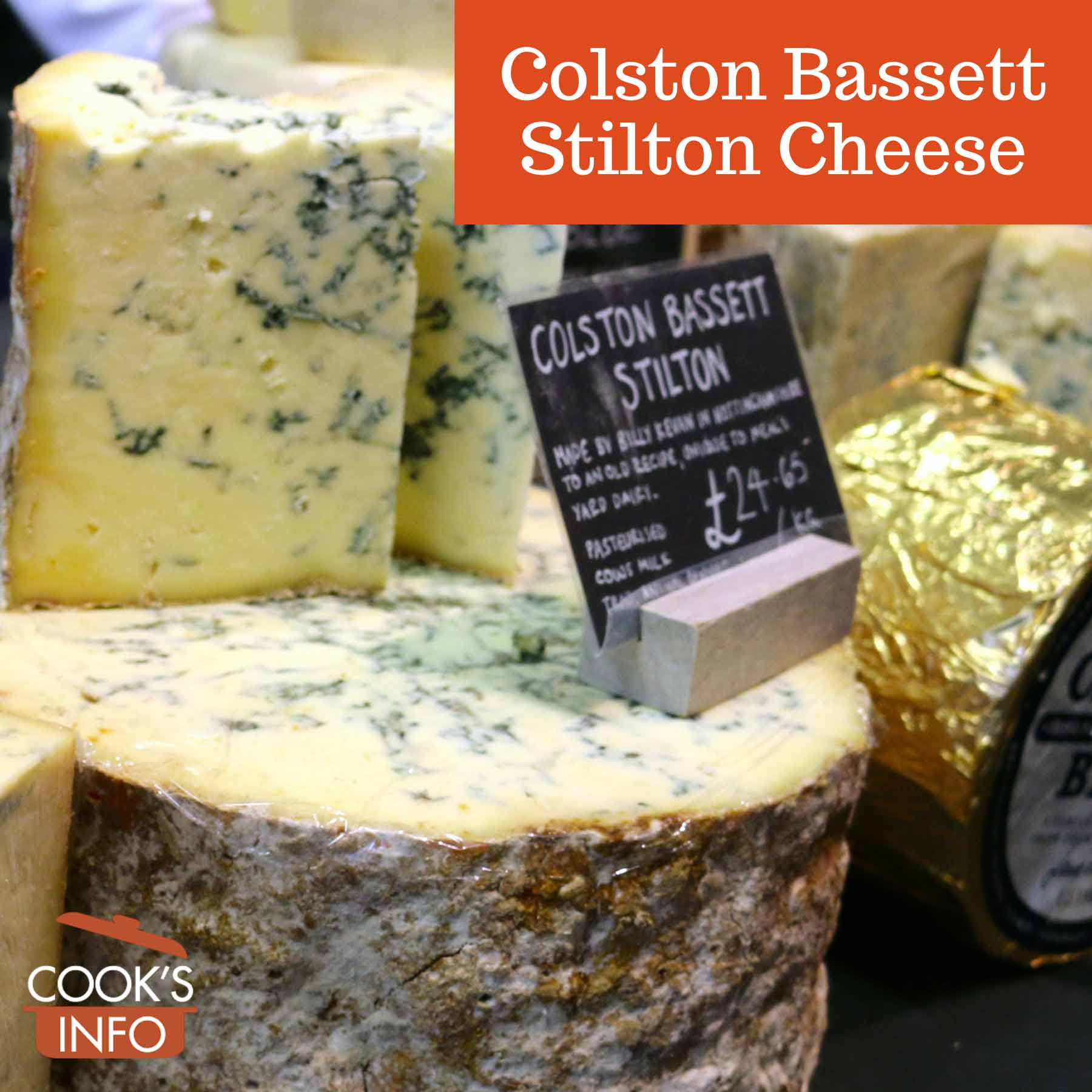 Colston Bassett is a small dairy producing Stilton cheese. It has been making its Stilton cheese since 1920, using milk from nearby farms.

Their Stilton is made from pasteurized milk.

The cheese has a dry, crusty rind, with a white mould on it.

It is moist and creamy inside, with a flavour that sharpens as the cheese ages.

The cheese is made in 7 ¼ kg (16 pound) cylinders, requiring 72 litres (16 gallons) each. After the milk is pasteurized, it is cooled to 30 C, then Penicillium roqueforti culture and starter culture are added, then vegetarian rennet. When the milk has curdled, the curd is cut, the whey drained off, and the curd let stand overnight for further draining. Then the curd is milled, salted, and packed into hoop moulds. The cheese is allowed to drain another 5 days, during which time the hoops are turned daily.

Then the mould is removed, and the surface is smoothed.

The cheese is put in a first aging room for 20 days to let the skin dry, then taken to separate maturing rooms, where it is turned three times a week.

When the cheese is four to six weeks old, it is pierced by machines. The holes give air to the Penicillium roquefortii mould, which will then start growing. A week later, there is a second piercing.

The cheese is then allowed to stand and mature a further three weeks, before being packaged and shipped.

Prior to the advent of the Colston Bassett dairy, Stiltons in the area were made at individual farm houses in average weights of about 10 pounds (4 ½ kg.)

Starting in 1912, the village doctor, Dr William Windley, championed the cause of a local cooperative dairy to make Stilton. Various people subscribed for shares, raising £1000.00 to purchase a piece of land and erect a building. The dairy was ready for production in 1915. The First World War was on, however, so they made a cheddar type cheese instead as required by wartime law.

In 1920, the dairy hired its first head cheesemaker, Tom Coy, and they turned their focus back to Stilton and started making it.

During World War Two, the dairy had to once again turn its hand to making cheddar instead of Stilton. (See: Government Cheddar)

The dairy was able to resume Stilton production in 1947.

Tom Coy retired in May 1960. Ernie Wagstaff took over. He had started with the company in January 1950.

In 1982, the dairy added more room to handle increased demand.

The dairy started pasteurizing the milk for its Stilton in the early 1990s.

In October 1996, the dairy got only the third head cheesemaker in its history, Richard Rowlett, who had joined the company in 1989. Rowlett switched from animal rennet to vegetarian rennet, and starting piercing the cheeses earlier so they’d develop mould earlier and be ready to sell earlier. Randolph Hodgson of Neal’s Yard Dairy complained that the quality suffered. The cheese didn’t age properly; it developed a bitter taste. Hodgson said that if the blue mould develops too soon, then it can overwhelm other flavours. Later piercing allows more flavour to develop first before the blue mould does.

In 2002, Hodgson cancelled his orders for their Stilton. Consequently, the dairy agreed to make special batches for him, with animal rennet and piercing happening later.

Rowlett has since been replaced by Billy Kevan.