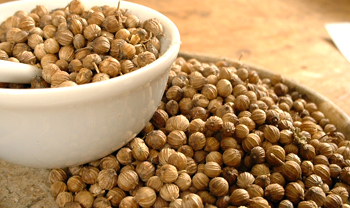 If Coriander plants are allow to flower, and pass through a normal life cycle, they produce small, round crunchy seeds that taste totally different from the plant, which is used as an herb. And unlike fresh Coriander, which should be added at the end of cooking as its flavour will disappear otherwise, the flavour of the seeds is not impacted by cooking. They taste somewhat like citrus peel.

Recipes will call for them either whole or ground. Many people advise you to grind them as you need them, as the ground tends to lose its flavour quickly, and they are right about that. But when you’re slinging together eight different Indian dishes for a dinner, the ground is far more convenient. Better just to buy small amounts of ground coriander seed, use as needed, and should it happen to be stored so long it becomes a scentless powder, pitch it and buy more. 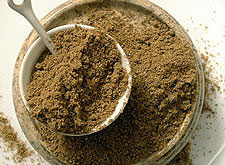 While the plant can be called either cilantro or coriander, the seeds are always referred to as Coriander Seeds, never cilantro seeds.

Ground coriander seed is actually quite nice in apple pie.

Store in sealed container out of the light.

This web site generates income from affiliated links and ads at no cost to you to fund continued research · Information on this site is Copyright © 2023· Feel free to cite correctly, but copying whole pages for your website is content theft and will be DCMA'd.
Tagged With: Ancient Egypt, Coriander, Indian Food, Mexican Food