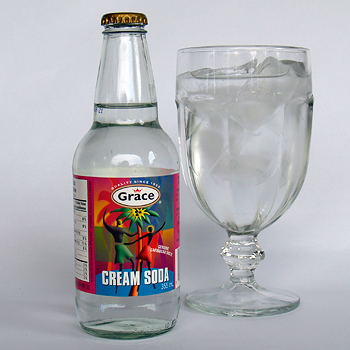 Cream Soda is an eye-poppingly sweet, vanilla-tasting, carbonated soft drink. It is not the same as an Ice Cream Soda.

It has a soft rather than astringent fizz to it, and a foamy head that lasts a long time.

It comes in red, pink, brown, and green colours, as well as clear. In North America, it is most often coloured a lurid bubble-gum pink. It is also sold in blue, or with a brownish amber colour, like a golden beer colour.

In North America, vanilla is not the only flavour that it comes in , though it’s often presumed to be. It’s just the most usual taste. For instance, A&W distinguishes between its regular cream soda and its Vanilla Cream Soda. Some makes will almost taste like bubble-gum.

It also comes with additional flavouring, such as Orange Cream Soda and Lime Cream Soda. In Asia, you’ll also encounter more fruit-flavoured ones: melon ones, and grapefruit ones (which are yellow.) Aside from the grapefruit ones, Cream Sodas are usually green in Asia.

Cream Soda is not a good mixer in drinks; it is best drunk on its own.

There is no cream in these mass-market versions of Cream Soda; the “cream” in the name refers to the soft fizz.

There is, however, a very different version of Cream Soda, which does in fact have cream in it. It is made in sofa fountains and at bars (in the Italian sense of the word bar.)

The drink is made to order for you on the spot, in the same way that an Ice Cream Soda was made for you at the druggist’s counter. It is made from carbonated water, flavoured syrup, and cream.

You fill a tall glass with glass, and add syrup until glass is about ⅔ full. Syrup flavours can be chocolate, hazelnut, orange, raspberry, or vanilla.

Then, you add carbonated water to within a few finger-widths of the top of the glass, and stir in cream. You use a thin cream, such as Single Cream or Half and Half.

Spelt “Creme Soda” in South Africa, where it’s made green.

This web site generates income from affiliated links and ads at no cost to you to fund continued research · Information on this site is Copyright © 2022· Feel free to cite correctly, but copying whole pages for your website is content theft and will be DCMA'd.
Tagged With: Pop