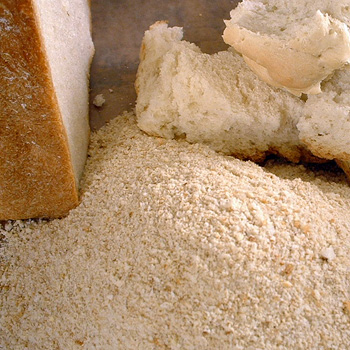 Dried Bread Crumbs are very fine crumbs made from bread that has been allowed to dry until it is brittle. They are used as topping, a coating or as a filler. You can make them yourself, or buy them plain or seasoned.

Let your bread dry right out.

Some people advise you to toast or bake the bread. Toasting, though, might give the wrong taste entirely. And as for turning the oven on, if you’re going to be spending all that gas or electricity money to run the oven for a few pieces of bread you might just as well spend the money on store-bought bread crumbs and get some convenience for your money.

Instead, to dry your bread, just set it out in a basket or on a plate for 4 to 5 days. If it’s the summer and you don’t have screen windows, please cover it with one of those mesh things you use for picnics, so that flies don’t crawl over it.

If you don’t have a food processor, you can grate the dried bread with a box grater or you can put it between two sheets of waxed paper or in a plastic bag and crush it with a rolling pin, Or, you can try busting it up into small pieces and whizzing it through your blender. The secret to doing it in a blender is to whiz a batch of pieces, dump the result into a strainer above a bowl so that the crumbs go through leaving the bits that didn’t get crumbed, and then give those bits a second round in the blender.

This web site generates income from affiliated links and ads at no cost to you to fund continued research · Information on this site is Copyright © 2022· Feel free to cite correctly, but copying whole pages for your website is content theft and will be DCMA'd.
Tagged With: Bread Crumbs