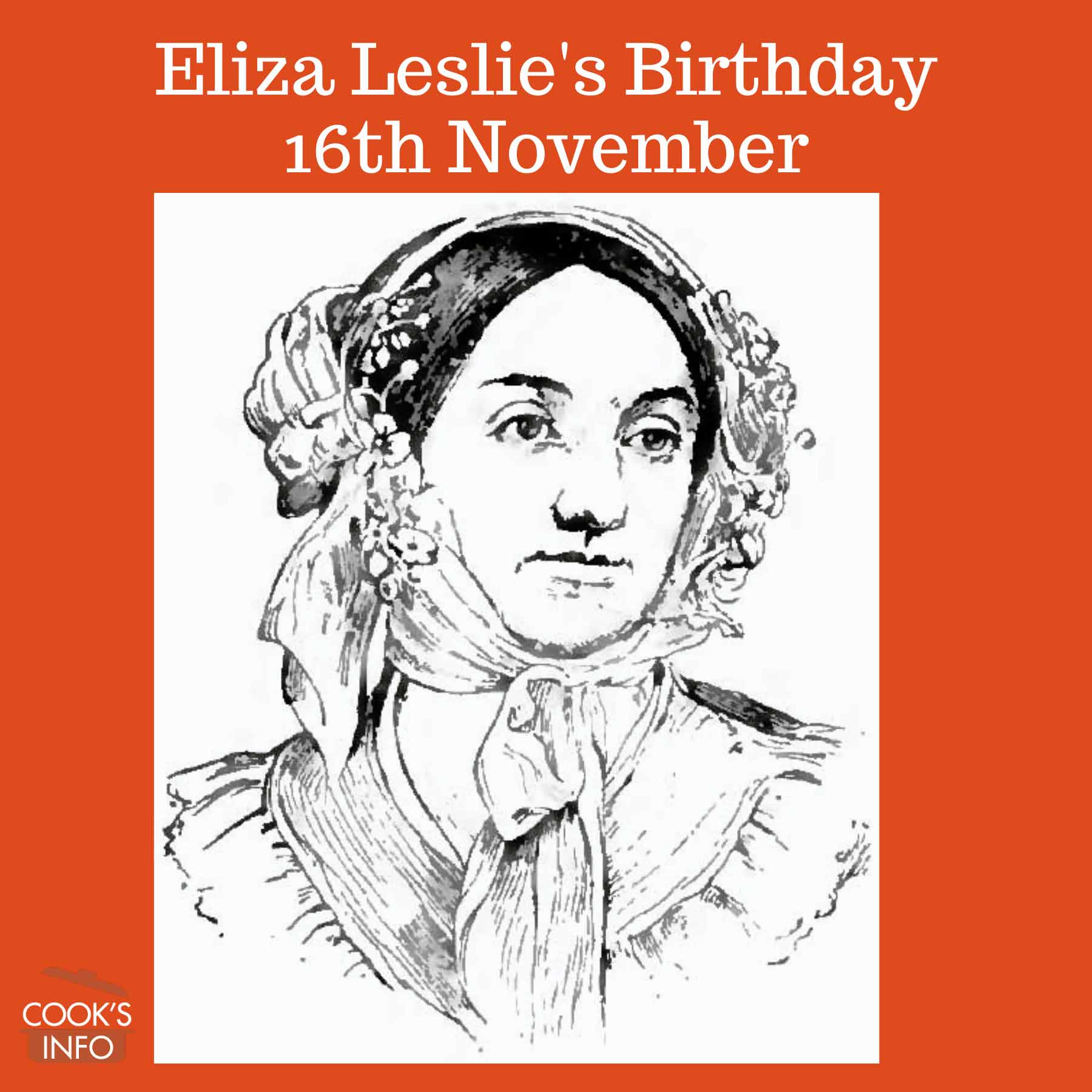 The 16th of November is the birthday of Eliza Leslie.

Eliza Leslie (16 November 1787 – 1 January 1858) was a popular American author of cookbooks, etiquette books and short stories. Her cookbooks, written in a strong, opinionated, witty style, found a ready audience in a burgeoning American middle class wanting to acquire some food sophistication, and some manners at the same time to go along with it. She may also have published the first chocolate cake recipe in the United States. (See Recipes below).

She was born into a well-connected family in Philadelphia. Her father associated with Benjamin Franklin and Thomas Jefferson (naming one of his sons after Jefferson) and took his family to live for several years in London.

Though Leslie wanted to be remembered for her short stories and novels, and did her best to try to keep them to the forefront of things she was recognized for, it is for her cookbooks that she is now primarily remembered, and indeed, even at the time, it is the cookbooks that were her bread-and-butter and made her very well-off financially.

Her cookbooks evolved from not just addressing a middle-class audience, but also helping to create one, by giving them a guide for more refined living. In terms of format, though, her recipes regressed: her very first cookbook presented the ingredients first, separate from the directions, in what would become the modern style, but later ones reverted to burying the ingredients in the directions, in traditional style.

Leslie never married, supporting herself by her writing. She lived permanently at the United States Hotel on Chestnut Street and became somewhat of a Philadelphia celebrity.

She became known for her sarcastic wit and heady opinions, and in fact was believed by some to be a European, owing to her acerbic comments about Americans. She particularly didn’t like her fellow Americans asking her how much money she had made from her writing. She reckoned that they wouldn’t ask how much a man made, and that they shouldn’t feel at liberty to ask her either, just because she was a woman.

Learn more about this remarkable woman’s full and engaged life and her contribution to American cookery: Eliza Leslie.

Leslie is becoming particularly well-known in modern times for possibly having printed the first American chocolate cake recipe. A cake recipe is perhaps a far cry from the literary fame Leslie had hoped for from her fiction, but “fame is a fickle food”, as her fellow mid-19th century American writer, Emily Dickinson, would say.

“Scrape down three ounces of the best and purest chocolate, or prepared cocoa. Cut up, into a deep pan, three-quarters of a pound of fresh butter; add to it a pound of powdered loaf-sugar; and stir the butter and sugar together till very light and white. Have ready fourteen ounces (two ounces less than a pound) of sifted flour; a powdered nutmeg; and a tea-spoonful of powdered cinnamon—mixed together. Beat the whites of ten eggs till they stand alone; then the yolks till they are very thick and smooth. Then mix the yolks and whites gradually together, beating very hard when they are all mixed. Add the eggs, by degrees, to the beaten butter and sugar, in turn with the flour and the scraped chocolate,—a little at a time of each; also the spice. Stir the whole very hard. Put the mixture into a buttered tin pan with straight sides, and bake it at least four hours. If nothing is to be baked afterwards, let it remain in till the oven becomes cool. When cold, ice it.” — Leslie, Eliza. The Lady’s Receipt Book. Philadelphia, PA: Carey and Hart. 1847. Page 201. 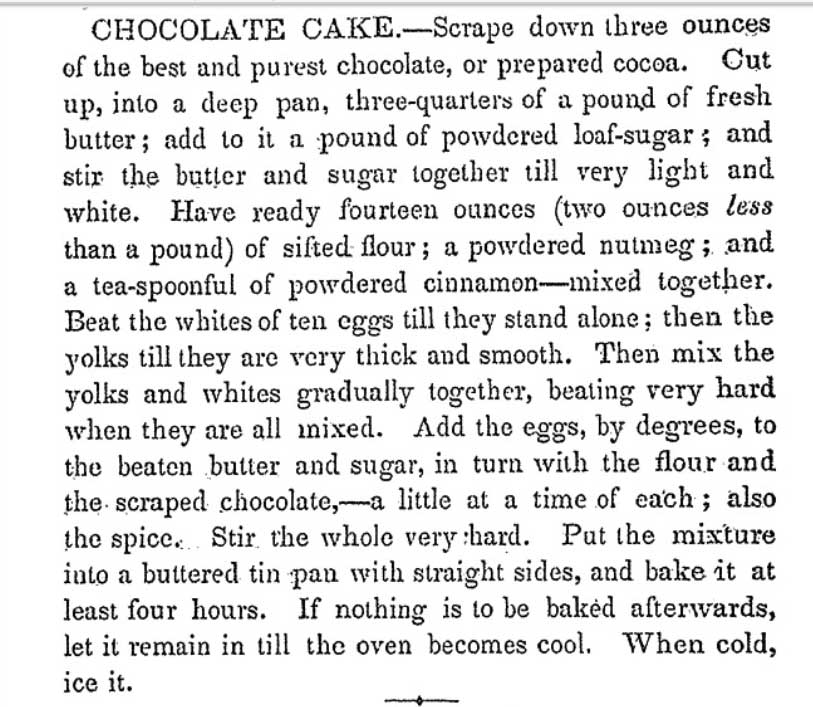