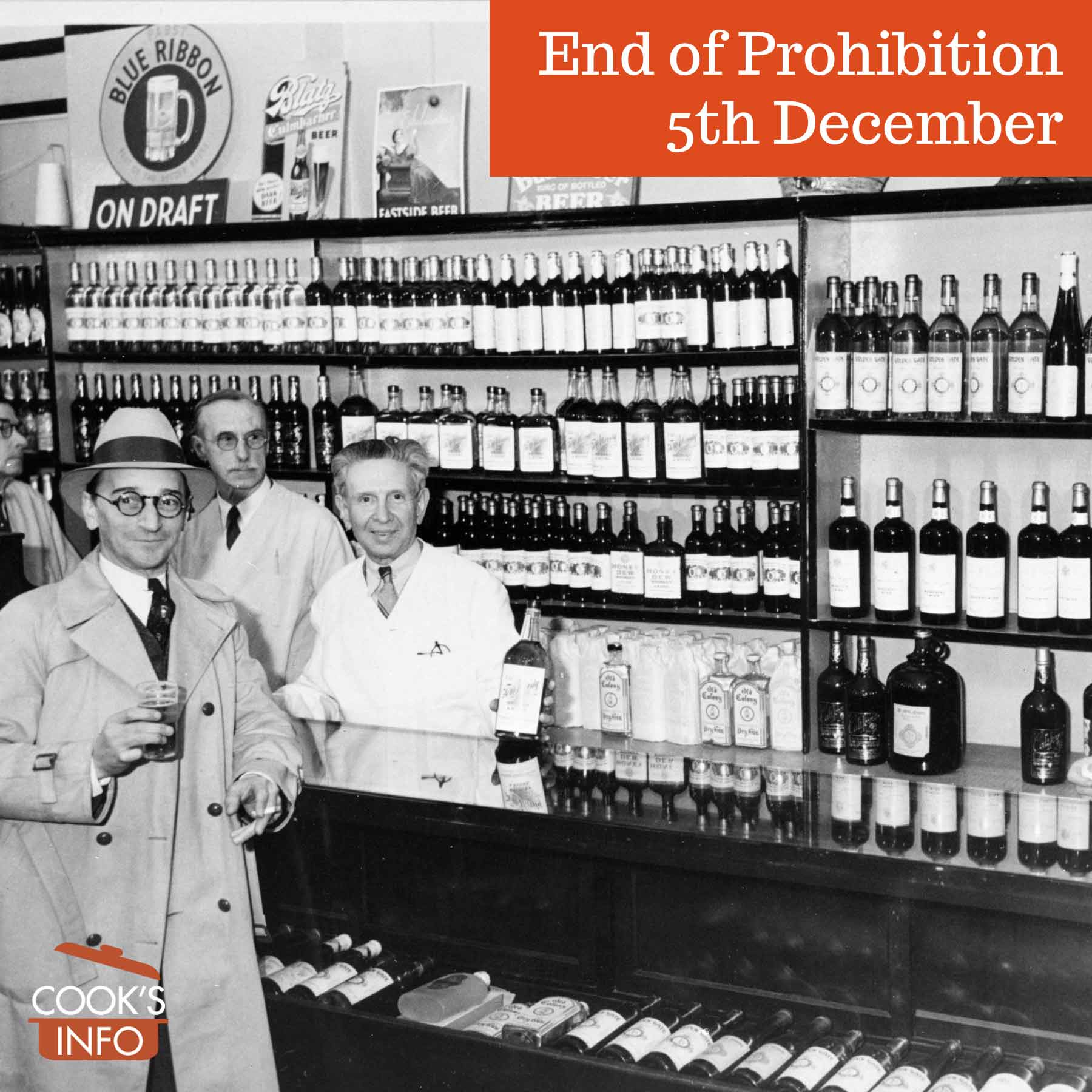 The 5th of December marks the day in 1933 when Prohibition — a full ban on the manufacture or sale of alcohol — came to an end in the United States.

The first legal drinks, however, didn’t actually really flow until the next day.

A movement to get people to abstain from alcohol, called The Temperance Movement, had been agitating for a total ban on alcohol since the 1800s in the United States, as well as other countries such as Canada. They believed that alcohol led to many societal ills. They finally got their victory in the United States on the 17th of January 1920 when the 18th Amendment to the United States Constitution went into effect.

The Amendment banned the “manufacture, sale, or transportation of intoxicating liquors”. You could still drink alcohol, if you could get it somehow. This led to a culture of crime that spread up around making and selling alcohol illegally to consumers.

Repeal of the ban on alcohol

Eventually, the depression hit, and governments at all levels in the U.S. became “thirsty” for the taxes they used to make off the sale off alcohol. Politicians saw people were still drinking, except that all the profit was going to organized crime, instead of them.

In the 1932 presidential election, Franklin D. Roosevelt promised that he would end prohibition. 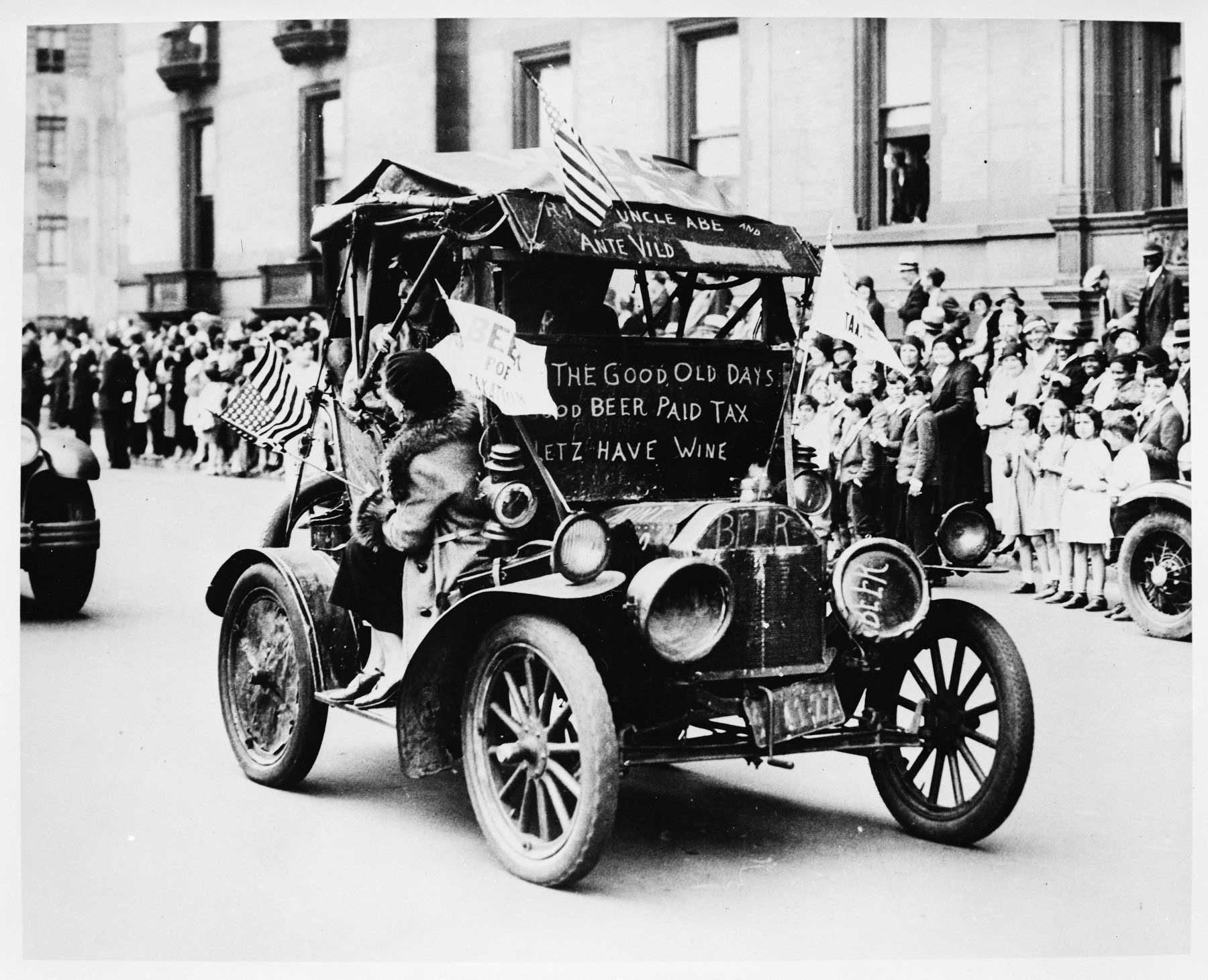 An Automobile Decked Out with Signs and Banners Supporting the Repeal of the 18th Amendment. 1932. Picryl / Public Domain

The Beer-Wine Revenue Act of April 1933 had paved the way, legalizing the sale of beer and wine with an alcohol content of 3.2% or lower. But the assent of 36 states legislatures was needed to end Prohibition altogether, as it had been written into the constitution.

The repeal of Prohibition was the first time in American history that a constitutional amendment was repealed.

The day Prohibition was repealed

On the 5th of December, The Intelligencer Journal of Lancaster, Pennsylvania cautioned its readers in an editorial:

“There will be a tendency today and for the next several days to celebrate the advent by those who fought so hard for repeal.

It will do little good, but we urge moderation to those who would celebrate for good and sufficient reasons. In the first place, the most of the liquor which will be sold for some time to come will be little if any better than the bootleg stuff which has been on sale for some time. That means the drinkers will be taking “raw stuff” which will have a tendency to upset the strongest stomach and the hardiest constitution.

Then, too, we commend the advice of the Chief of Police of Baltimore, a very wet town, who urges all those who want to celebrate to leave their automobiles at home and go spreeing in a taxicab. This is timely and kingly advice, because the laws against drunken driving are stringent and the courts are not going to be lenient in case there are accidents due to drunken driving.

Summed up, it is just ordinary common, horse, if you will, sense, to take the return of Barleycorn moderately. It is no use to try to drink it all in one day because there are many distilleries operating and those who take their stuff straight and in moderation are sure to live to do the same thing another day, whereas those who try to drink it all in one day, may or may not celebrate in the future.” — Repeal. [Editorial] Lancaster, Pennsylvania: Intelligencer Journal. Tuesday, 5 December 1933. Page 8, col. 1.

For New York City, the repeal came too late in the day on the 5th for many people to take advantage of it on that actual day (Note the article below refers to a 9 PM ratification time; that seems to have been the anticipated time at time of press, but in the event, it turned out earlier):

“Although the sale of alcoholic beverages becomes legal tonight, wines and whiskies will be available only in the 1,000 restaurants, clubs and hotels that have licenses. Dinners, dances and other formal fetes that are to be held tonight at licensed places to mark the end of prohibition, will go on as scheduled, but there will be no legal liquor for parties at home.

In deciding to wait until 9 P.M. to ratify the repeal amendment, Utah made it impossible for New York to obtain legal bottled goods for consumption off the premises. Retail liquor stores must close here by 8 P.M. Restaurants and cabarets that expected an influx of individual celebrants may reap the benefit.

In hotels, bottled goods may be sold to guests, if they have rooms. The action also limits celebrations to six hours, unless the police curfew at 3 A.M. is extended today. Previously it has been announced the curfew might be deferred until 4 A.M. if that was desired by the public, but no requests had been received.

Up to late yesterday only about a dozen licenses had been issued for retail liquor stores. Clerks in the offices of the New York State and City Alcoholic Beverage Control Boards worked late last night to get more out in time.

The boards had devoted their activities earlier in an effort to get out the store licenses. Then they changed their plans and issued permits for restaurants and clubs. With a whole day in which to do so, they may be able to issue more neighborhood restaurant licenses.

Whether enough legal wines and whisky would be available in view of the confusion and delay attending issuance of licenses, and the inability of the liquor stores to open. was regarded as highly doubtful last night. Thus New York faced the anomalous situation of heralding the return of legal drinking with bootleg drinks.” — Legal Liquor Due Tonight; City Ready to Celebrate; Stores to Open Tomorrow. New York, New York: New York Times. Tuesday, 5 December 1933. Page 1, col. 6.

In any event, over the next few days, people had alcohol to celebrate with. But, where did it come from, given that the manufacture and import of it had been forbidden for the past 13 years? Some of it came from alcohol in government warehouses which had been let into the country based on loopholes or exceptions; the rest of it would have been bootlegged or bathtub booze:

“Plentiful Supply Promised. As to the liquor, there will be plenty of it. The quality, it is promised, will be much better than that of the bath-tub gin and Halsted Street Scotch of the prohibition era, and prices will be considerably lower. But the prices will still be far above the pre-prohibition level, and will not return to that level for a year or so, if ever. A survey of the city’s liquor supply showed yesterday that there will be no lack of Bourbon whisky, the standard drink of pre-prohibition America. There are an estimated 200,000 cases in the city now, brought in under medicinal liquor permits, most of which, however, is blended (the boot leggers call it cutting.

There will be no dearth of gin, the prohibition standby, and new gin is acclaimed to be far superior to the bathtub product. The city has, or will have within a few weeks, a plentiful supply of domestic wines, largely from California, and brewers are ready with a flood of beer exceeding the 3.2 margin of the last few months

As to imported liquors and wines, the supply is probably plentiful enough for the time being, in view of the prices which these commodities will command. The greatest shortage, if drinkers follow the custom they learned during prohibition, will probably be of Scotch whisky. There is quite a bit of imported champagne on hand,-more than of the domestic variety, in fact,-and a goodly sprinkling of brandies, cordials, and imported still wines.

There were only 6,870 gallons of imported whisky. wine, and liquors under bond in Chicago customs warehouses yesterday, although withdrawals during the last few weeks, on medicinal liquor permits, had been heavy, it was announced by Anthony Czarnicki, collector of customs.” — Chicago to give legal liquor a gay welcome. Chicago, Illinois: Chicago Tribune. Tuesday, 5 December 1933. Page 1, col. 7.

The after-effects of Prohibition and Repeal

Most enforcement of Prohibition was on the poor, the working class, new immigrants, and other marginalized people. The rich and politicians and even police chiefs kept right on drinking all through it all, unscathed. So it ended up being a restriction on consumption based on the social class you were in. [1]Moss, Stephen. Why didn’t prohibition work? You asked Google – here’s the answer. Manchester, England: The Guardian. 30 March 2016. Accessed October 2021 at https://www.theguardian.com/commentisfree/2016/mar/30/prohibition-google-autocomplete

Some people quipped that repeal of Prohibition made it harder to get a drink because with legalization now came age limits, enforced closing hours for bars, etc. Previously, when it was illegal, you could get a drink anywhere, at anytime, they said.

In the 1920s, alcohol consumption in the States only went down by 50%, nowhere near the 100% decrease that had been the aim. [2]Moss, Stephen. Why didn’t prohibition work? You asked Google – here’s the answer. Manchester, England: The Guardian. 30 March 2016. Accessed October 2021 at https://www.theguardian.com/commentisfree/2016/mar/30/prohibition-google-autocomplete

In terms of a money-maker, the end of Prohibition was a success: in the following year, the U.S. federal government made 9% of its tax money from booze, which helped to fund many Depression-era make-work projects. [3] Klein, Christopher. The Night Prohibition Ended. History.com. 5 December 2013. Accessed October 2021 at https://www.history.com/news/the-night-prohibition-ended

Note that this was a repeal of prohibition at the federal level. Section 2 of the amendment repealing Prohibition made regulation of alcohol for the most part a matter for the individual states to look after themselves. Consequently, some states, such as Utah, and Mississippi, maintained a prohibition on alcohol within their own borders.

So now there’s a mish mash of state laws on alcohol. In many cities and counties, it’s still illegal to buy alcohol or even own it in those jurisdictions. Some states only allow alcohol to be sold from government-owned stores.

In the United States as a whole now, you can make beer and wine at home for the personal consumption of your family. But you can’t sell it. And, you can’t make hard liquor, not even for your own consumption. But this permission to make it can be overridden locally where you live by your State.

Waxman, Olivia B. Why the Repeal of Prohibition Actually Made It Harder to Get a Drink. Time Magazine. 5 December 2018. Accessed October 2021 at https://time.com/5469508/prohibition-repeal-anniversary-history/

This web site generates income from affiliated links and ads at no cost to you to fund continued research · Information on this site is Copyright © 2022· Feel free to cite correctly, but copying whole pages for your website is content theft and will be DCMA'd.
Tagged With: Alcohol