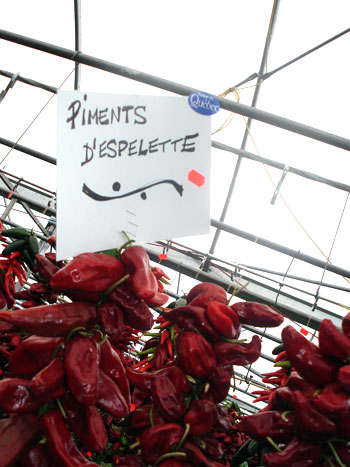 The peppers are about 4 to 5 inches (10 to 12 cm) long, tapered, and have a very mild taste, no hotter than the hottest paprika.

During August through to September, the peppers start ripening from green to red, and are harvested when fully ripened.

They are strung through their stems into garlands, and hung on racks on the southern sides of houses and buildings to sun dry for several weeks. Then they are roasted in an oven, and ground into a powder for use or sale.

Some are not dried, however. They made be sold fresh, or ones that look less than perfect may be processed into a paste labelled “purée.”

Some are also sold whole in brine, or pickled.

A cream is also sold, which is even milder than the paste.

1 December 1999 Espellette pepper producers were granted a French AOC for both the peppers and its products.

Originated in the New World, probably Mexico. Possibly introduced into the region in 1523 by a man named Gonzalo Percaztegi.

The stringing them into garlands started around 1940, as harvest increased.

There are around 2000 people in the village of Espelette (2005 figures.) A festival, started in 1967, is held to celebrate the peppers on the last Sunday of October. Strings are brought to Church that day to be blessed.

Espelette means “place planted with Boxwood shrubs.” The name, though, doesn’t refer to Espelette itself. Rather, it refers to the family name of the barons of Espelette, after whom the locale was named. They came from Navarre where Boxwood was plentiful. They built their first castle in Espelette around 1000 AD. The last one in the family died in 1694, leaving title to the castle and seigneural rights to the inhabitants of the village.

This web site generates income from affiliated links and ads at no cost to you to fund continued research · Information on this site is Copyright © 2022· Feel free to cite correctly, but copying whole pages for your website is content theft and will be DCMA'd.
Tagged With: Appellation of Controlled Origin, French Food