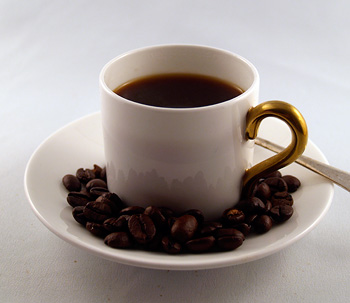 Espresso is a strong, somewhat bitter version of brewed coffee made from dark-roasted coffee beans.

Making it requires a special roast of coffee beans, usually a blend of dark-roasted, oily beans (less-dark roasts are more popular in northern Italy and France.) For use, the beans are finely-ground.

Often, the beans used can be of a slightly lower quality than might be used for drip or filter coffee, because the darker roasting the Espresso beans receive will change and develop the flavour anyway.

Outside Italy, some restaurants purporting to serve Espresso may not actually serve genuine Espresso. They may use Espresso roast coffee, but brew it in a drip machine first thing in the morning, and then use it throughout the day for various coffee beverages such as cappuccino, etc. This saves on the hassle of having someone trained who knows how to make actual Espresso.

You can also buy instant Espresso in powder or granules, to which you just add hot water.

For some English-speakers, no matter how well-brewed an Espresso is, it is always too burnt and bitter tasting for them.

When you just ask for a “coffee” (“Caffè”) in Italy, you get an Espresso. It’s the standard coffee. There are many versions of Espresso in Italy:

In America, serving Espresso with a twist of lemon zest on the saucer is often seen as a “classy flourish.” It is done in North America and sometimes in France, but not in Italy. Outside of Italy, this is called an “Espresso Romano.”

Italians are mystified at this. In Italy, it is only done when you’re ill because the belief is that doing this will make you throw up (and therefore feel better.)

To counteract the contention of non-Espresso lovers that Espresso has too much caffeine in it for them, foodies began saying that Espresso actually has the same amount of caffeine as regular drip coffee. But in fact, this is a “counter myth” that is wrong, and the drip-coffee drinkers were right. Ounce for ounce, Espresso has more because it is more concentrated. It only has less “in effect” because you drink it in such small quantities, compared to a normal cup size for brewed coffee.

“Coffee Espresso is the finale in keeping with an Italian dinner — and so few places are equipped to do it that it’s more a name than a reality.” — Lee, Martha. Coffee Can Be Exciting Ceremony. Oakland, California. The Oakland Tribune. Tuesday, 4 March 1941. Page 20.

“‘We’ll serve the salad course before dessert, not before the entree, and we won’t serve butter with the bread or lemon peel with the Espresso,’ said Hazan, whose goal is to teach Americans how to taste.” — Hayes, Jack. Hazan seeks to conquer midtown Atlanta with new Veni Vidi Vici – restaurateur Marcela Hazan. New York: Nation’s Restaurant News. 30 April 1990.

This web site generates income from affiliated links and ads at no cost to you to fund continued research · Information on this site is Copyright © 2022· Feel free to cite correctly, but copying whole pages for your website is content theft and will be DCMA'd.
Tagged With: Coffee, Italian Food