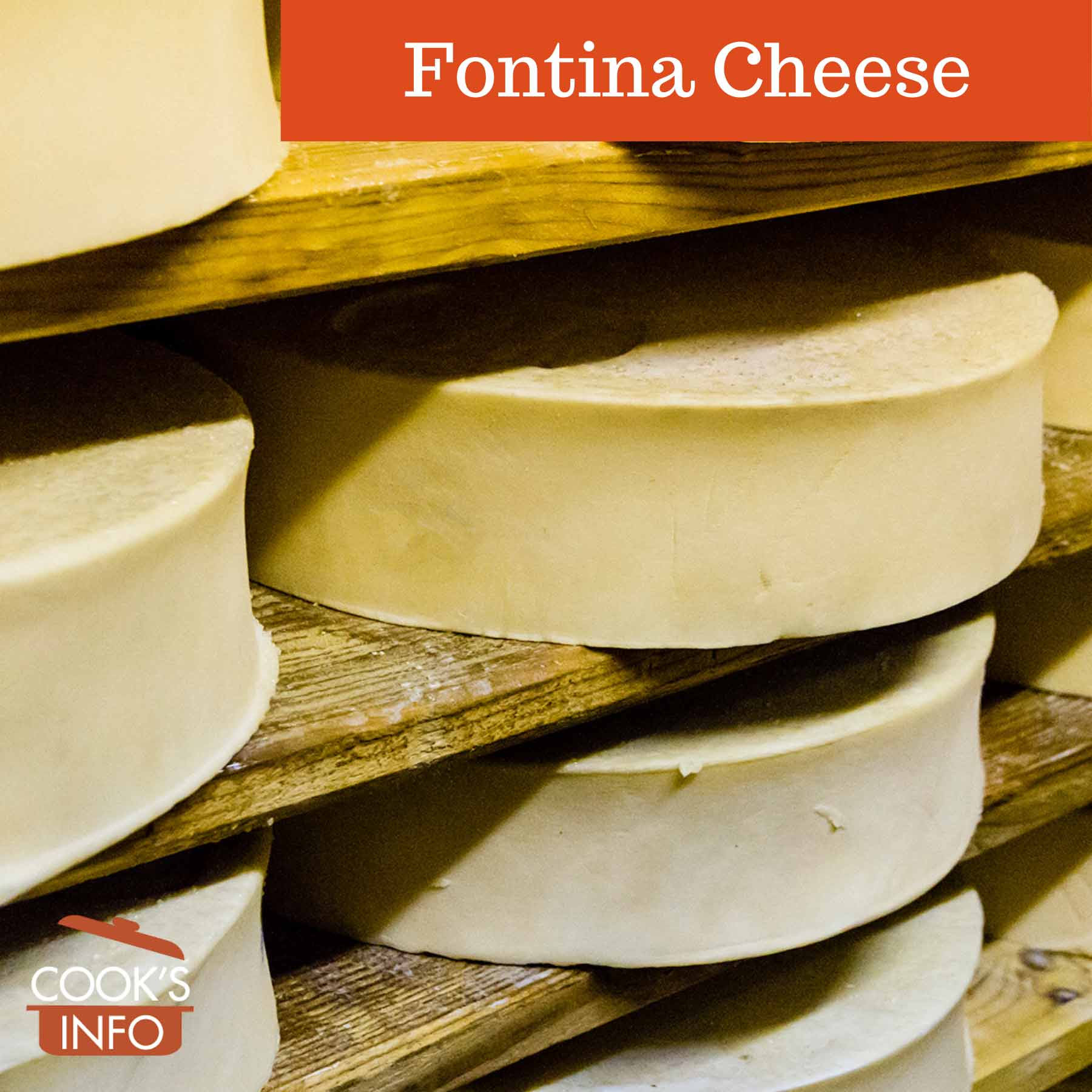 Fontina cheese is a firm, light-yellow cheese with tiny holes and a mild, nutty taste. Its rind can vary in colour from a dark golden brown to a dark yellow or a reddish-brown.

When young, Fontina can be used as a “table cheese.” When old, it becomes a grating cheese.

Genuine Fontina is a Protected Designation of Origin (PDO) cheese. It is produced in the Valle d’Aosta in the Italian alps. It has an image of the Matterhorn Mountain stamped on its rind.

There are many imitations of it now, often such under names such as “Fontinella”, “Fontal“, and “Fontella”. It was the Danes who popularized Fontina in North America with their version of Fontina. Knock-off versions tend to be milder and less complex in taste.

To make Fontina cheese, cow’s milk is heated to 36 C (97 F). (Raw milk is used for the genuine PDO cheese.) Calf’s rennet is then added to curdle the milk. The milk is let sit for 1 hour as is, then it is heated to 47 to 48 C (116 to 118 F) and let sit for another two hours held at that temperature. This is why you’ll sometimes see this cheese called “semi-cooked” (or “semi-cotta”, drawing on the Italian phrase.) [See also: Semi-Cooked Curd Cheeses]

The curd that forms is cut and drained in nets, then put into round moulds for 12 hours. When the cheese is taken out of the moulds, it is salted, and let sit for two months in a cool place. At the end of two months, the cheese is then taken to caves or vaults where it is aged for a further three months on pine shelves.

During this period in the caves, the rind is washed with brine every other day, and on the alternating days, it is brushed to take away any mould that does form on it. 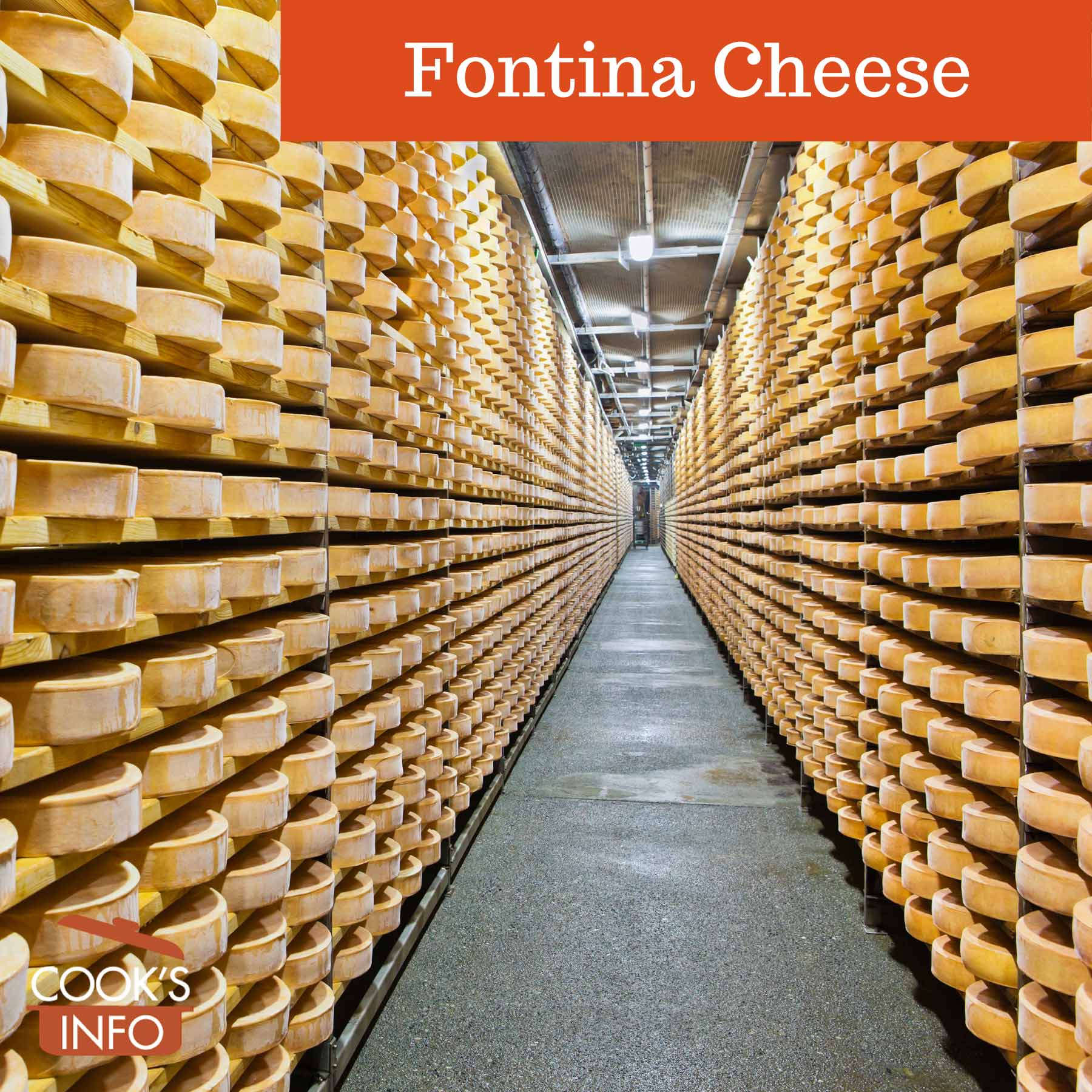 Melts well; can be used in fondues.

Taleggio, Goat’s Cheese, Appenzeller, Gouda. One food writer suggests mixing to an even paste the following: grated Gruyère with grated Parmesan, some milk and a drop of vinegar.

Producers claim that Fontina has been made in the Aosta valley since the 1100s (though you will also see the 1200s cited). If so, this may not have been Fontina as it is now made, because in the Middle Ages, people used cows to pull ploughs, not for milk.

You’ll see writers who also claim that pictures of round wheels of cheese in 13th century frescoes must be Fontina because they have the shape of Fontina cheese — ignoring the fact that most other cheeses in history have also been produced in that shape.

Fontina received its Protected Designation of Origin (PDO) status in 1996.

In the Valle d’Aosta region, on the Italian side of the Alps, there is a municipality (or “comune”, as the Italians call it) called Quart, within whose jurisdiction falls pasture land referred to as “Font.” This is where the “font” in “Fontina” comes from. That’s one theory, anyway. The second relates to how well the cheese melts, which in old French was “fontis” or “fondis”.

The name “Fontina” was first recorded in 1717, in a document produced by the monks of the Great St Bernard Hostel.

This web site generates income from affiliated links and ads at no cost to you to fund continued research · Information on this site is Copyright © 2022· Feel free to cite correctly, but copying whole pages for your website is content theft and will be DCMA'd.
Tagged With: Firm Cheeses, Italian Cheeses, Protected Designation of Origin