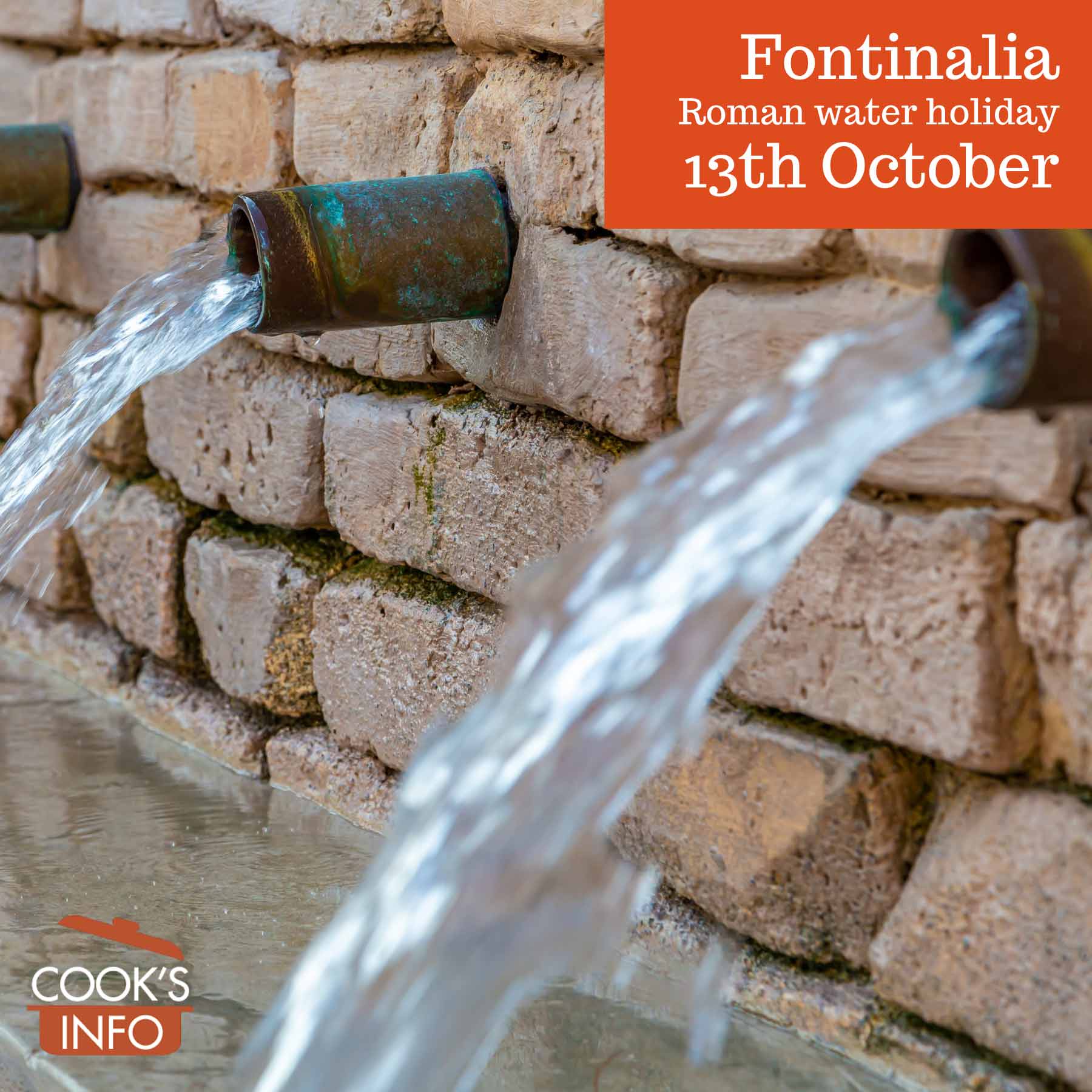 The 13th of October was the Roman holiday of Fontinalia.

Fontus was the son of Juturna, also a water god, who also has her own festival day on the 11th of January called the Juturnalia.

People celebrated Fontinalia by placing flowers and garlands around springs, wells and public fountains. Some scholars speculate that some people may have tossed coins or votive items into the water sources as well as other offerings. They also speculate that the holiday signalled a time to repair and maintain these water sources in advance of the day.

In many cultures, sources of water were highly regarded, and revered. There were many wells regarded as holy in England and Ireland; these were often left “wild”. The Romans, however, being compulsive civic organizers, mastered their water sources both in Rome and elsewhere, and made them into shared community resources.

“Fontanalia from Fons, which is the day of his holiday; owing to him then they throw crowns into the fountains, and crown the wells.” — Marcus Terentius Varro. De Lingua Latina. Liber IV. III. (Varro. On the Latin Language, Volume I: Books 5-7. Translated by Roland G. Kent. Loeb Classical Library 333. Cambridge, MA: Harvard University Press, 1938. Page 195.)

The Roman poet Horace wrote a poem which some interpret as referring to this holiday. It mentions offerings of wine being poured, the sacrifice of a kid goat, and wreaths of flowers being tossed as offerings into springs, streams, and rivers. (See Literature & Lore below).

Though Fontus was a minor god in the Roman pantheon, he was an old one, and had his name attached to several things.

There was an altar to Fontus on the Janiculan Hill west of the Tiber, and a gate — the Porta Fontinalis — named after him which led to the Campus Martius at the north-west of the city. 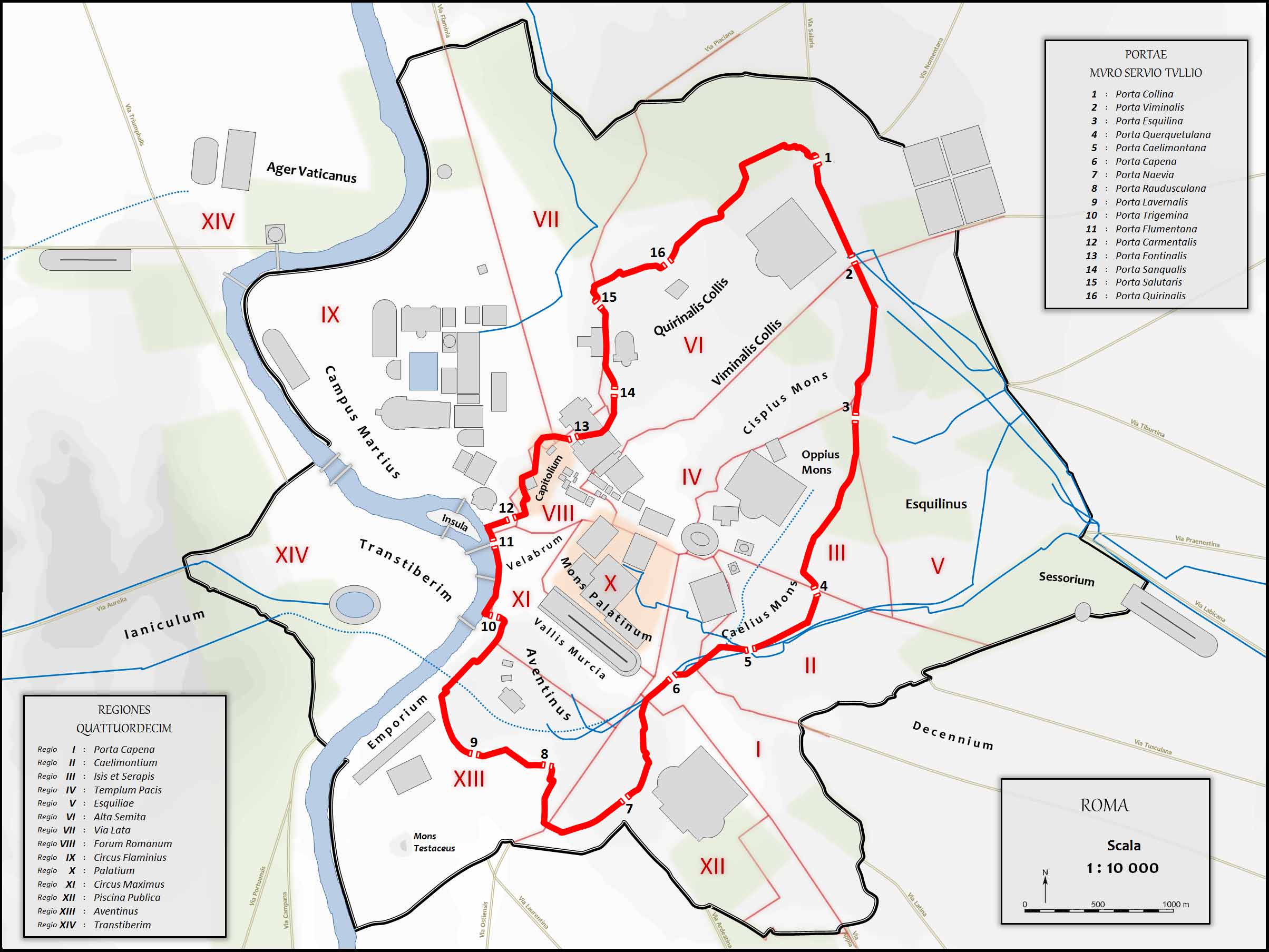 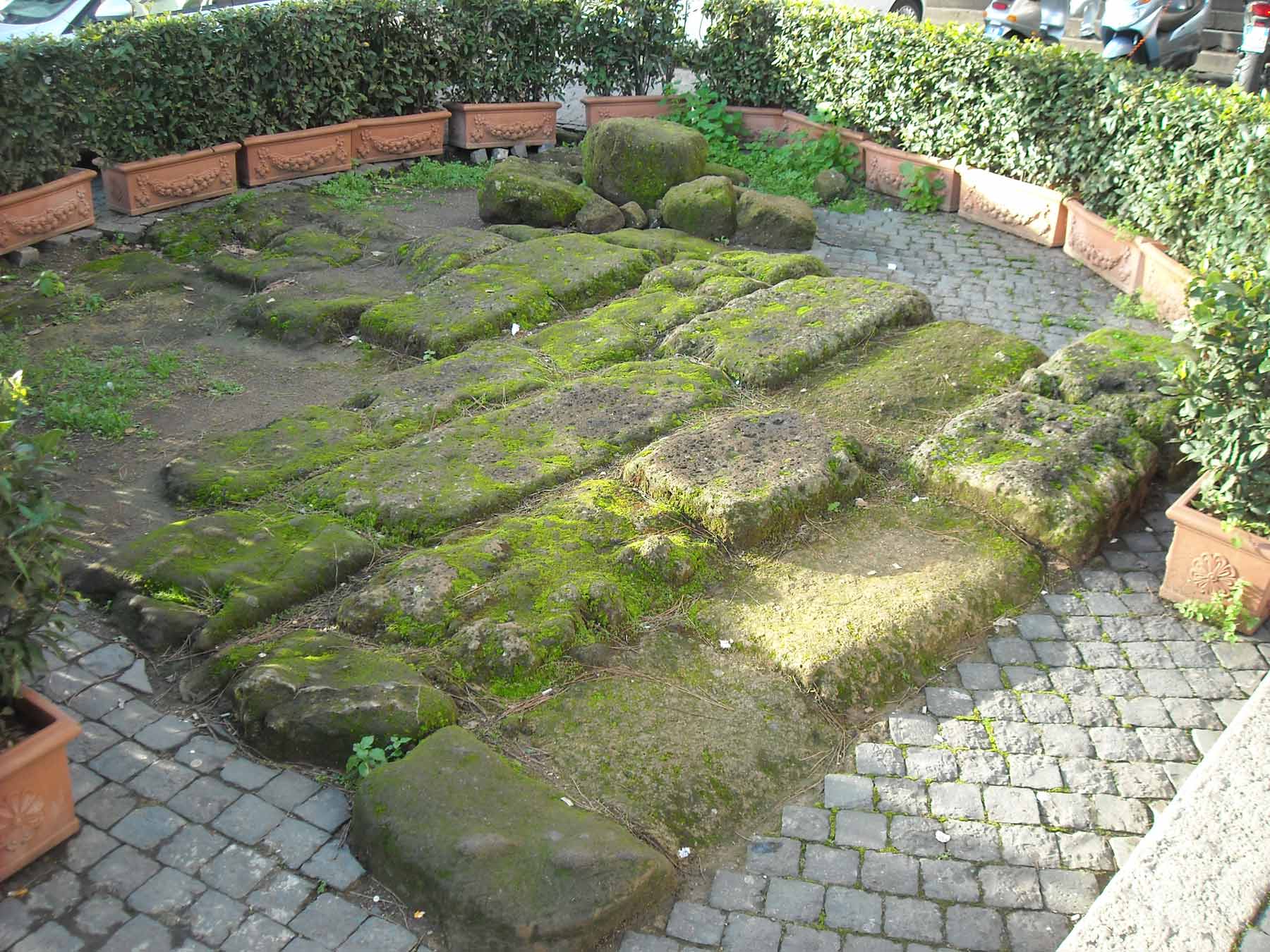 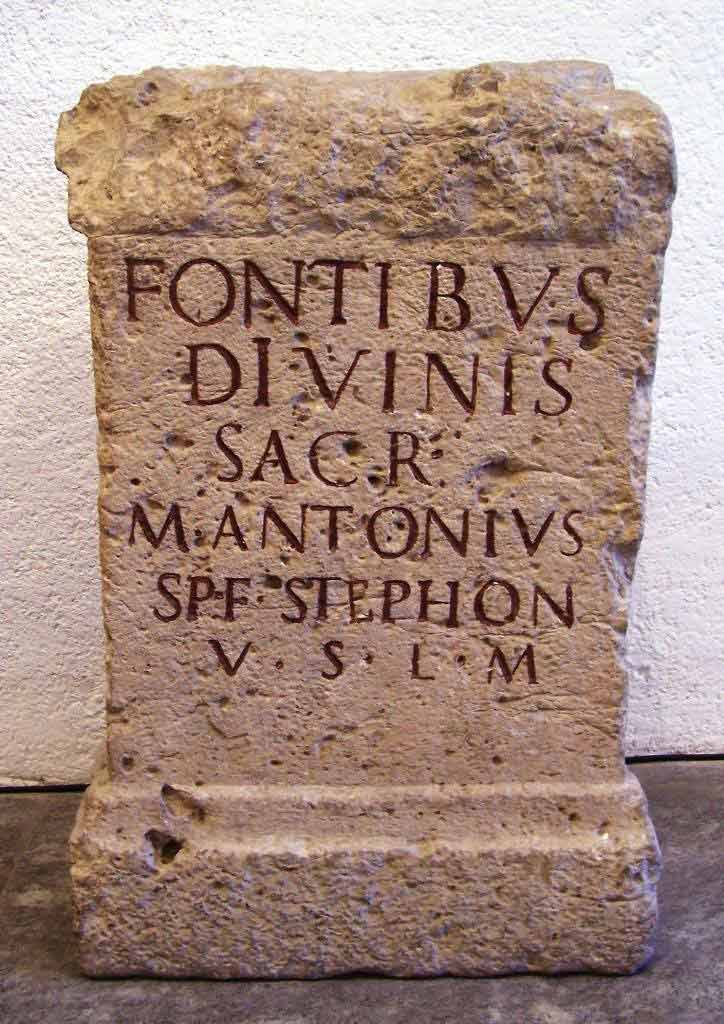 Pliny the Younger mentions a spring in Umbria, Italy, into which people tossed offerings of coins and pebbles. The spring, still extant, is the source of the Clitumnus (Clitumno today) river. There were temples by the spring. 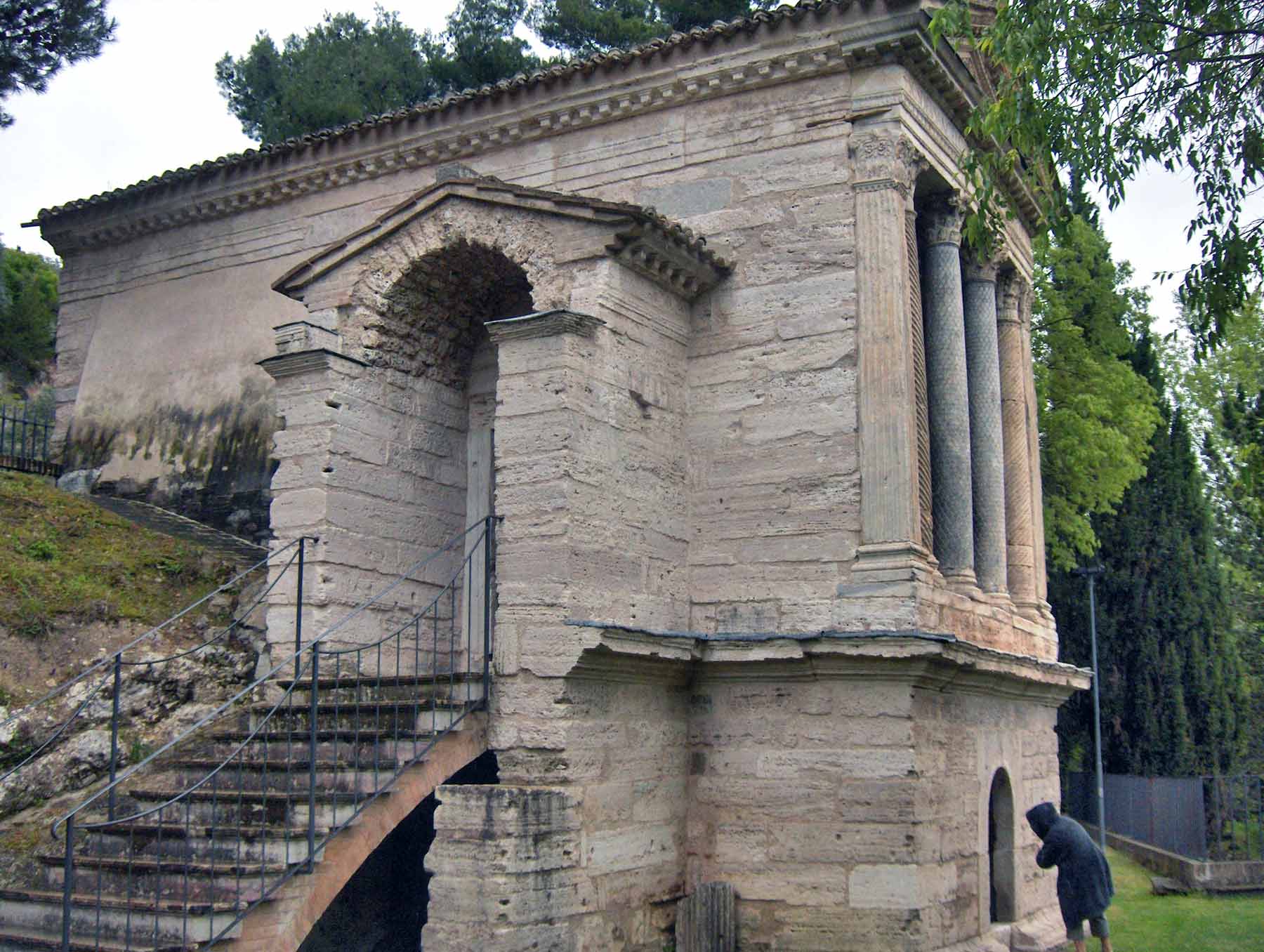 Church built using parts of temples at the spring of Clitumnus. Georges Jansoone / wikimedia / 2008 / CC BY 3.0

“Have you ever seen the spring at Clitumnus? If not — and I think you have not, or else you would have told me about it — go and see it, as I have done quite recently. I only regret that I did not visit it before. A fair-sized hill rises from the plain, well wooded, and dark with ancient cypress trees. From beneath it the spring issues and forces its way out through a number of channels, though these are of unequal size. After passing through the little whirlpool which it makes, it spreads out into a broad sheet of pure and crystal water, so clear that you can count the small coins and pebbles that have been thrown into it.” (Pliny, Ep. 8.8) 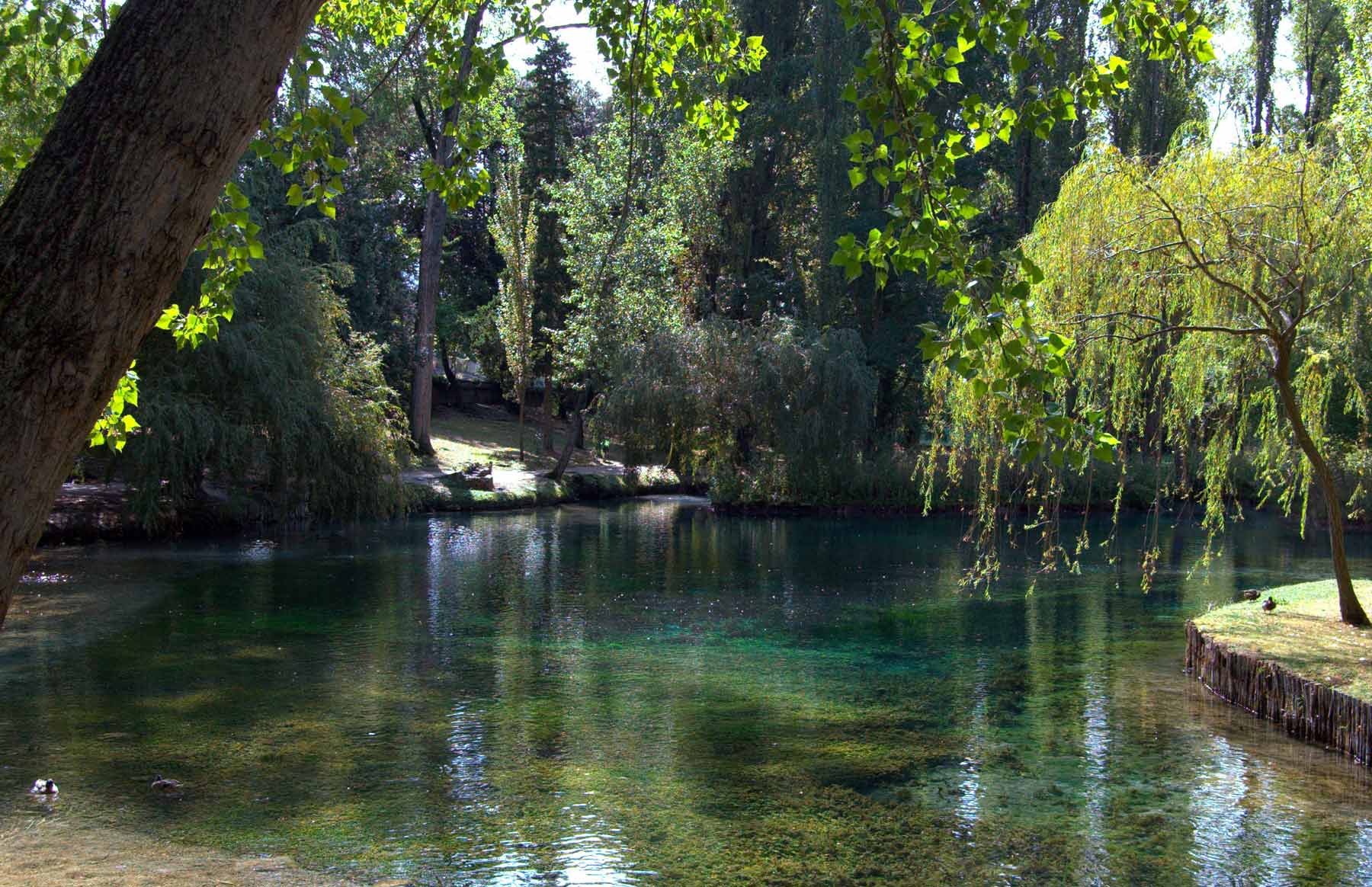 People who toss coins into the fountains in Rome may be participating in a tradition far, far older than they know.

Horace’s poem in honour of a spring of water:

“Spring of Bandusia, brighter than crystal,
deserving of sweet wine, and no less of flowers,
tomorrow You shall have the gift of a kid,
for which its brow, swelling with horns
just budding, predicts battle and the pleasures of love,
but vainly; for he will dye Your
cool edges with his red blood,
this offspring of a playful flock.
You the fierce hour of the blazing summer heat
Has no way to touch;
delightful coolness You
offer to pour out for tired oxen and the wandering flock.
You too shall be one of the noble springs
as I tell (in my verse) of the oak tree set above
the hollow rocks from where, chattering,
Your waters leap down

This web site generates income from affiliated links and ads at no cost to you to fund continued research · Information on this site is Copyright © 2022· Feel free to cite correctly, but copying whole pages for your website is content theft and will be DCMA'd.
Tagged With: Roman Food, Roman Holidays, Water