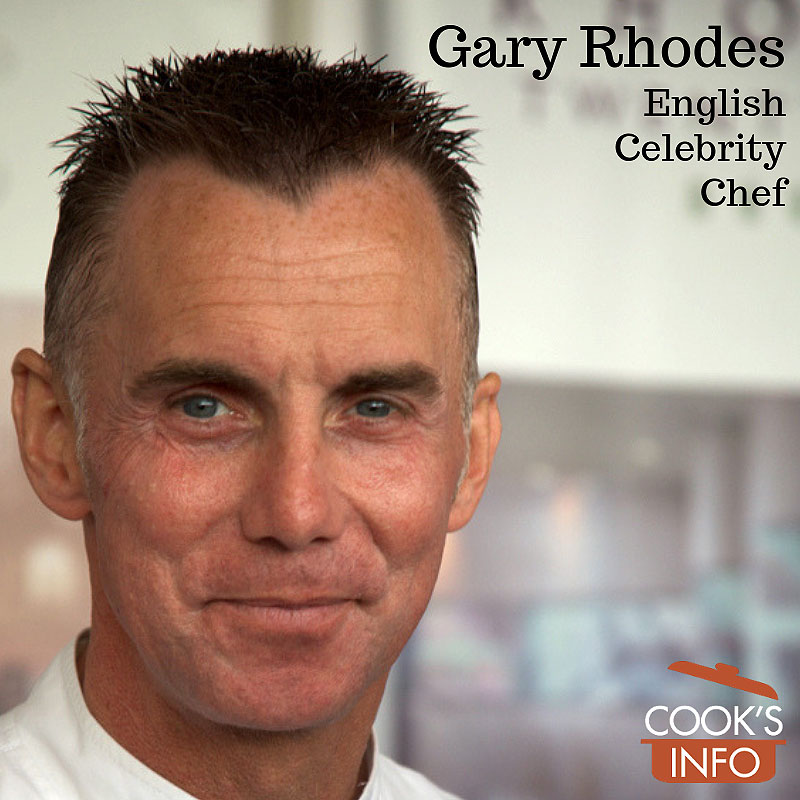 Gary Rhodes (1960 – 2019) was an English cookbook author, chef, and celebrity TV chef. He had a passion for re-interpreting classic British food using contemporary techniques to meet modern food preferences, applying these principles even to faggots, fish cakes and bread and butter puddings. He insisted on seasonal food. He said one of his inspirations as a cook was Graham Kerr.

Rhodes was born in South London on 22 April 1960, and grew up in Gillingham, Kent.

Rhodes said that he knew he loved cooking when, by the age of 13, he was able to make a successful Sunday roast dinner, including a steamed lemon sponge pudding recipe from Marguerite Patten. His father Gordon, a school caretaker, had left the family when Gary was 6 years old, and his mother Jean gone back to work, so he had to learn to cook for himself, his mum and his sister. His mother eventually remarried to a builder named John. His first father died when Gary was 8.

Rhodes said that he decided to become a chef at the age of 14, in 1974, while reading about kitchens in the book “Down and Out in Paris and London” by George Orwell. He started studying cooking in the same year at Thanet Technical College in Broadstairs, Kent. Rhodes says that one of his tutors there, Peter Barrett, taught him teamwork.

In 1979, at the age of 19, he graduated from the Technical College and in the same year, got a job at the Hilton Hotel in Amsterdam working as a junior chef. One day, while running for a tram, he looked the wrong way owing to his English traffic instinct, and was hit by a van. He suffered a bad head injury with a blood clot which required eight hours of brain surgery.

He recovered fully after six months, and returned to England.

In 1986, he began working as Head Chef for Kit Chapman at the Castle Hotel in Tauton, Somerset, where he helped earn the restaurant a Michelin star.

In 1990 — started working for David Levin at the The Greenhouse in Mayfair, helping that restaurant to earn a Michelin star as well in 1996.

In 1987, he had his first TV appearance, on the English TV programme called “Hot Chefs.”

In 1998, he opened a second restaurant, “Rhodes in the Square” in Dolphin Square, Chichester Street, Pimlico in the Dolphin Square Hotel. (This restaurant operated until May 2003, and was then replaced by a restaurant called “Allium” run by an Anton Edelmann.)

In 1999, Rhodes opened gastropubs called “Rhodes and Co.” in Crawley in the Arora International Gatwick Hotel (near Gatwick airport), in the department store “Jenners” in Edinburgh and in the Golden Tulip Hotel in Manchester. The Edinburgh location underwent a bit of foodie scandal when it was discovered in 2000 that frozen chips were being used.

In 2003, he opened his restaurant “Rhodes Twenty Four” on the 24th floor in the Tower 42 building. The restaurant was awarded a Michelin Star.

In 2004, he opened a restaurant called “Gary Rhodes” in the Calabash Hotel in Grenada in the Caribbean.

On 14 April 2005, he opened the “Arcadian Rhodes” restaurant on the P&O cruise liner called “Arcadia.”

At the end of July 2005, he opened “Rhodes W1 Brasserie” in London, England: “In 2005 Gary also opened Rhodes W1 Brasserie at the revamped Cumberland Hotel in Marble Arch.” [1]Accessed August 2019 at https://www.rhodestwenty10.com/about-us .

In July 2006, he opened the “RhodesD7” restaurant on the corner of Capel St and Mary’s Abbey, in Dublin, Ireland. The location occasioned many raised eyebrows, as it was considered a rather dodgy part of town, particularly for an upmarket restaurant. People were “saying that RhodesD7 is on the wrong part of Capel Street. Their partners chime[d] in and [said] they wouldn’t fancy walking there at night. I don’t know how much Mr Rhodes has to do with this new establishment that combines his name with one of the city’s less fashionable postcodes, but he seems to have set tongues wagging.” [2]Rhodes D7, Capel St. The Irish Times. Dublin, Ireland. 19 August 2006 The D7 name came from the postal code of the area. 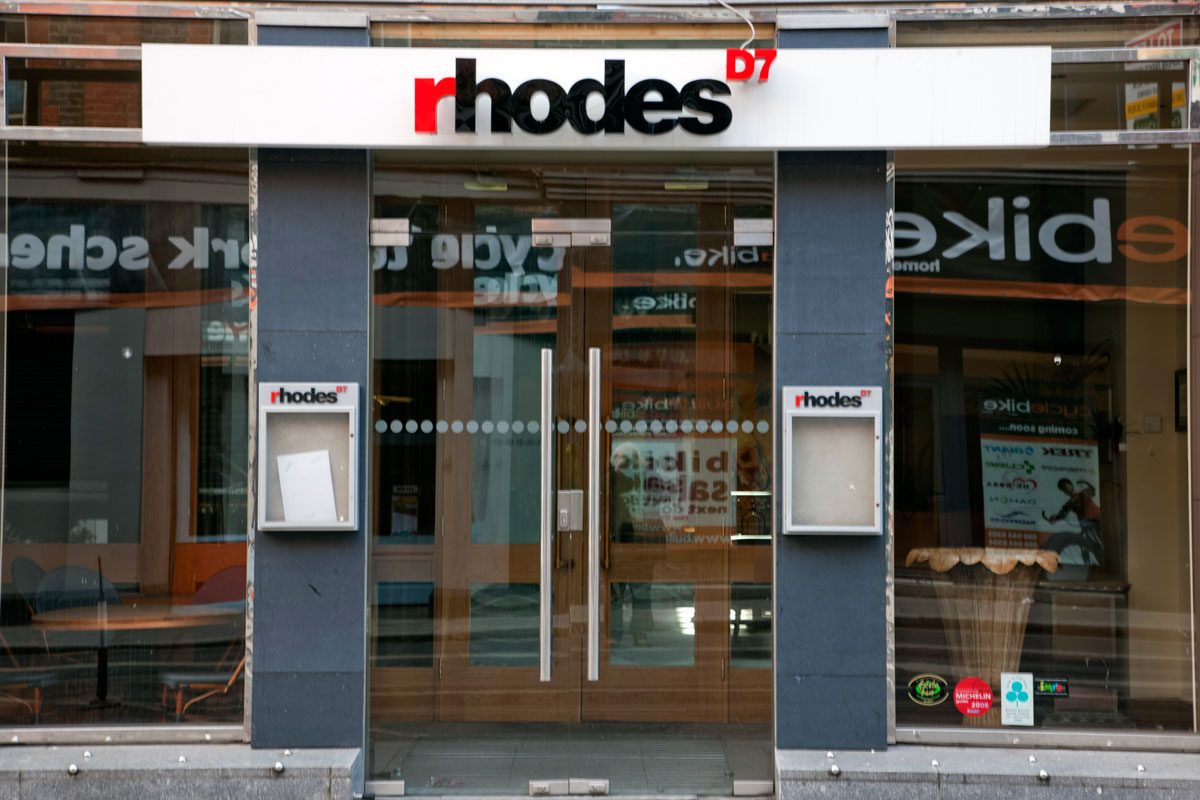 The D7 restaurant would close at the very start of 2009: “The Herald recently reported that Gary Rhodes’ restaurant RhodesD7, on Dublin’s Capel St, has gone mysteriously quiet. The restaurant closed for renovations two months ago and was due to open again on March 17, but the reports say that it remains shut… [3]Rhodes D7 closed for business? Cheapeats.ie. 24 March, 2009. Accessed August 2019 at http://www.cheapeats.ie/2009/03/24/rhodes-d7-closed-for-business

In April 2007, he opened the “Rhodes W1 Fine Dining.” It was next door to his W1 Brasserie. “Gary Rhodes’ new Rhodes W1 Restaurant at the Cumbernauld Hotel in Marble Arch, London, is to open towards the end of April. Situated next to his Rhodes W1 Brasserie, the 45-cover restaurant will be “very pretty, small-scale, top-end and very glam…” [4]Big Hospitality. New Rhodes W1 Restaurant takes French direction. 28 March 2007. Accessed August 2019 at https://www.bighospitality.co.uk/Article/2007/03/28/New-Rhodes-W1-Restaurant-takes-French-direction 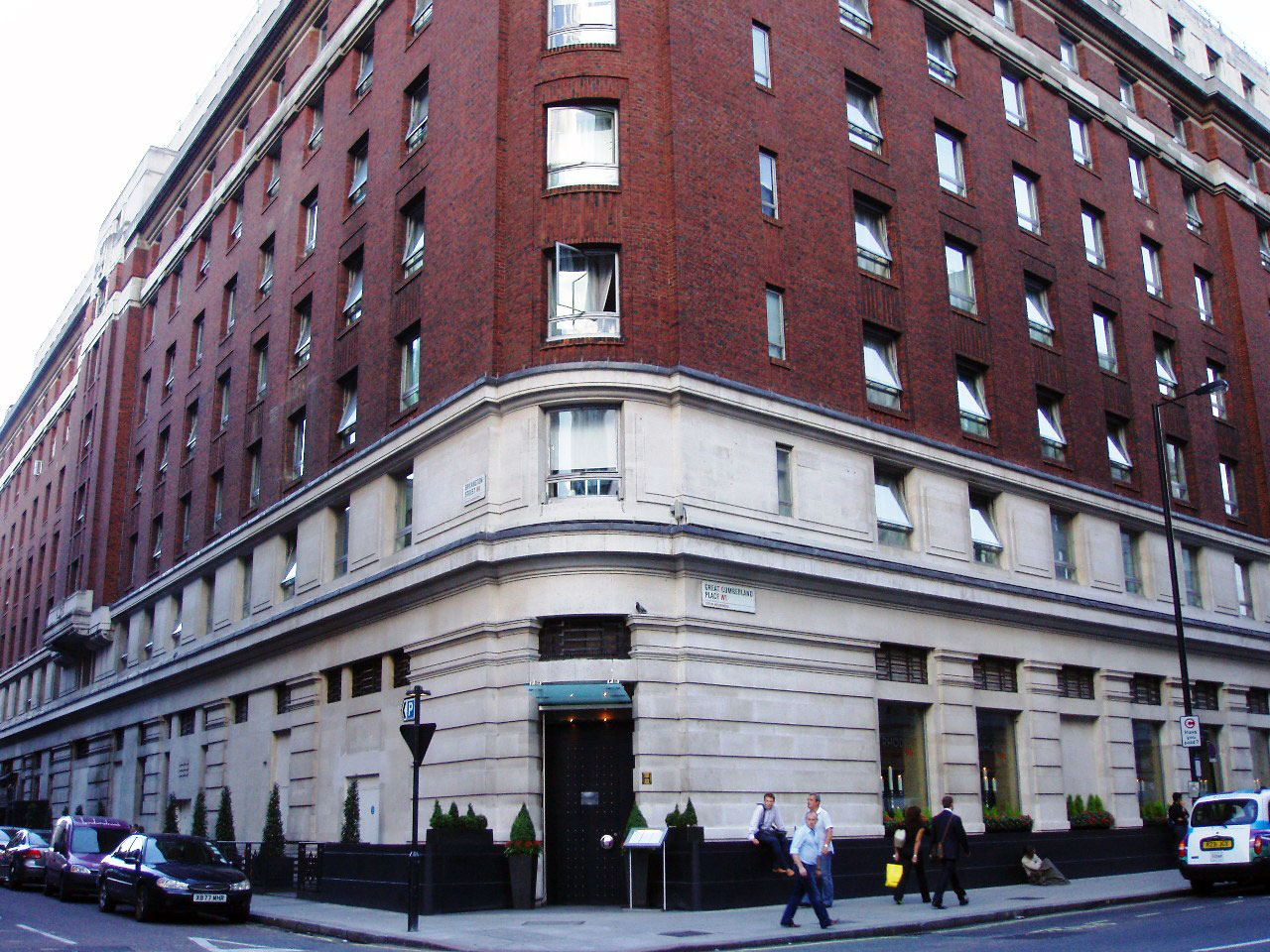 In 2012, the partnership with the Cumberland Hotel for both “W1 Rhodes” spaces was let expire , and the hotel took back the spaces (and the staff) both for the brasserie and the restaurant, dropping the name “Rhodes.”

“After a very successful eight years together, Restaurant Associates and The Cumberland hotel have taken the decision to cease their partnership as of 28 September 2012. This is a mutual decision which allows both companies to focus on their primary areas of expertise… Rhodes W1, the fine-dining restaurant which won a Michelin star three years ago, will be renamed W1 Restaurant at the Cumberland, while Rhodes W1 Brasserie will be rebranded the Brasserie at the Cumberland.” [6]Harmer, Janet. Gary Rhodes checks out of the Cumberland hotel. The Caterer. 27 September 2012. Accessed August 2019 at https://www.thecaterer.com/articles/345508/gary-rhodes-checks-out-of-the-cumberland-hotel

Rhodes was particularly known for his gelled, spikey hair from the age of 26 up until 2001, at which point it was replaced by a short crop hair cut at the encouragement of the producer of the Masterchef series, Melanie Jappy.

The backing for his restaurant ventures until spring 2003 came from the giant catering company, Sodexho. He also sold a line of preserves branded in his name.

Rhodes said he loved clothes and had about 60 suits. He lamented a custom-made £2,000 Giorgio Armani suit that in 2006 he burnt a hole in trying to iron the trousers too fast one day. He loved ironing clothes.

At one point, he did advertisements for Tate & Lyle.

In 2006, he received the Order of the British Empire (OBE) for services to the hospitality industry.

How to make an omelette

“This is your life” tribute to Gary Rhodes

Gary Rhodes: I’m so fanatical about ironing that I press everything – even if it’s already been dry-cleaned! London: Daily Mail. 9 June 2011. 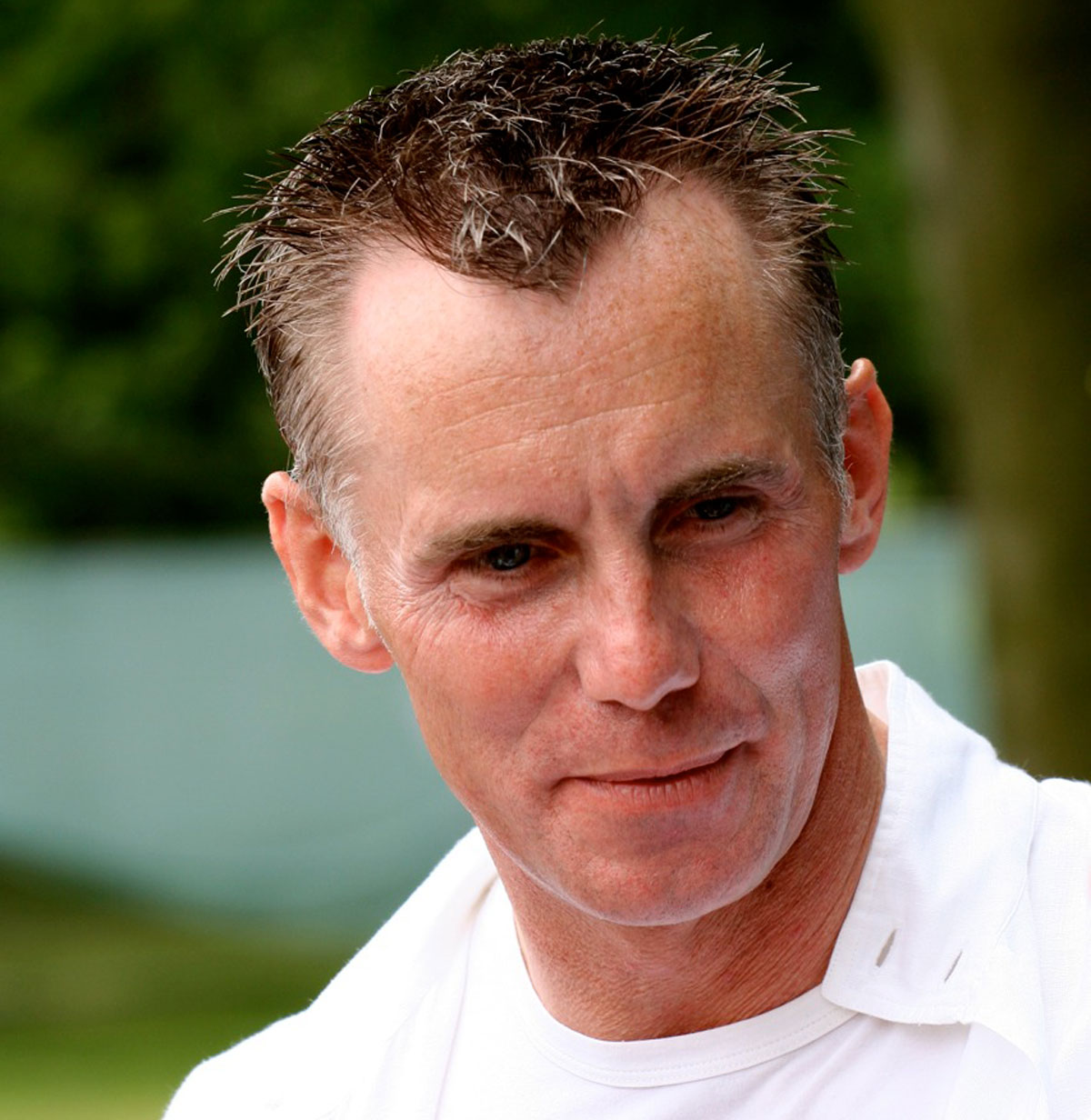