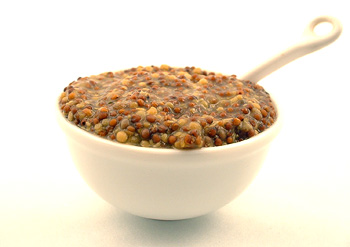 The Germans don’t have any mustard they refer to in particular as “German mustard”, in the way that the British do have and refer to an “English” mustard.

Consequently, it’s best to think of the term as a grouping of mustards.

Most German mustards are coarsely-ground, sweet and mild, though there are some smooth ones as well as hot ones. If people say “German-style” mustard, they probably mean the sweet, coarsely-ground ones, though they will be in for a surprise when they go to Germany and get a sausage served with a very hot mustard! Brown mustard seed is preferred, though black is also used. German mustards are often flavoured with herbs.

Milder German mustards tend to be yellowish or light brown.

Weisswurstsenf is a pale mild mustard. Hot mustard is described as “scharfer Senf.”

Bavarian style mustards are sweet and dark, and often have brown sugar in them.

Düsseldorf mustards are more like Dijon, but tend to be hotter, and darker in colour than Dijon.

Düsseldorf had Germany’s first mustard factory in 1726, and is still a centre of mustard production.

This web site generates income from affiliated links and ads at no cost to you to fund continued research · Information on this site is Copyright © 2022· Feel free to cite correctly, but copying whole pages for your website is content theft and will be DCMA'd.
Tagged With: German Food, German Mustards