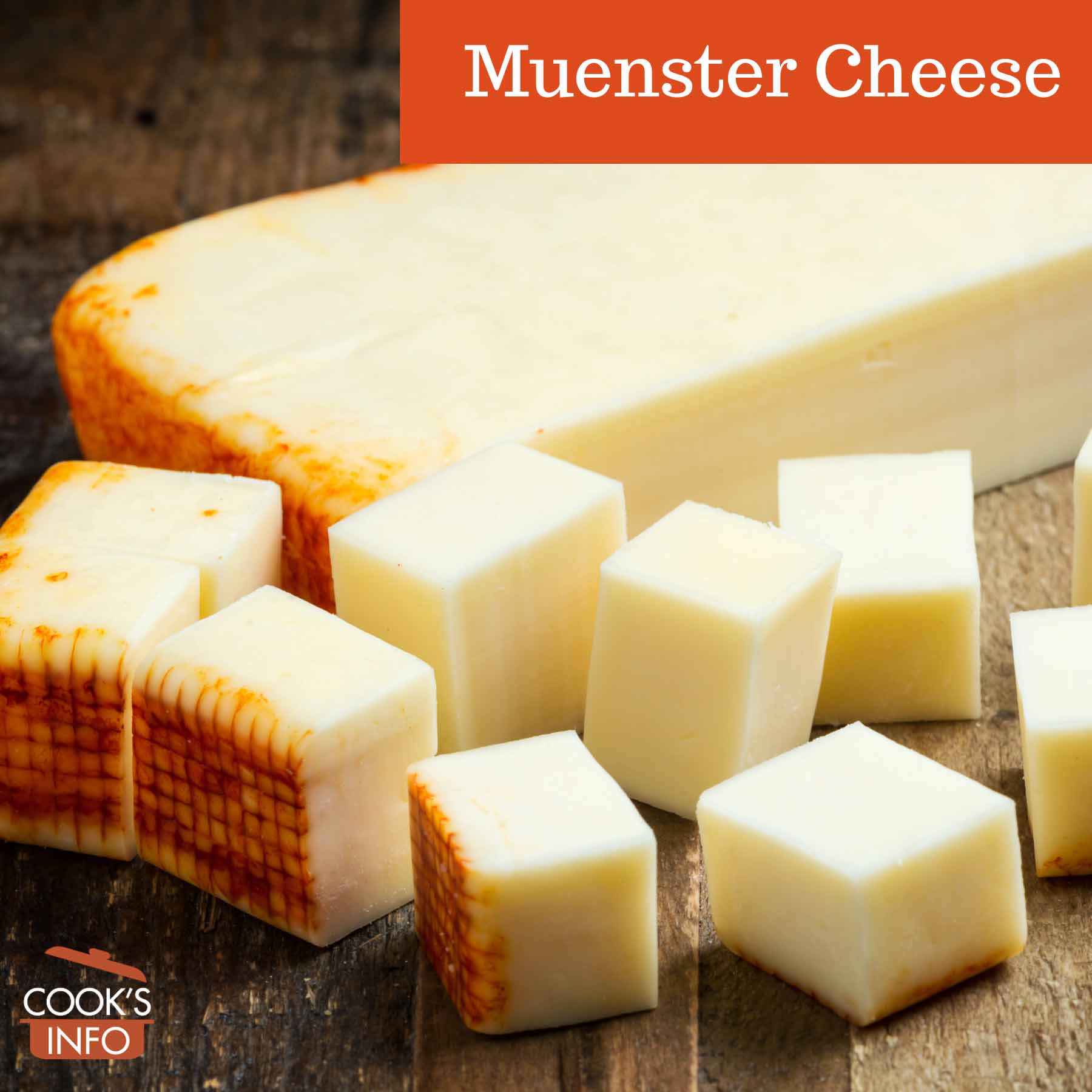 There are several variations on what constitutes Muenster cheese.

In general, it is a washed rind, semi-firm cheese, that is soft, creamy and yellowish inside, with a red sticky rind outside. The rind is edible, though some cut if off because it has a very salty taste from being washed with brine while it is aging. The cheese is very mild when young, but it becomes very, very smelly when old, and really smelly when very old.

American versions are sold younger, and with a weaker taste, than European versions.

Some versions of Muenster may be flavoured with anise or caraway.

Muenster is made in Germany and France, as well as in Copenhagen (Denmark), and in Wisconsin (United States). But despite the German name, very few Muenster cheeses are actually made in Germany these days. And note that the French spelling of ‘Muenster’ is ‘Munster’.

The North American version is essentially an imitation of European Muenster. Supple, moist and pale inside, it is also quite bland (some wags say it’s like latex.) It is useful, though, when you need a cheese that will provide body without interfering with the taste of other ingredients. It does have some smell to its rind, but that is not reflected in the taste of the cheese.

This version is made starting with pasteurized whole cow’s milk. The milk is partially skimmed, heated, then has rennet and bacteria added. When curdled, the curd is cut, whey is drained away, and the curd is put in moulds. The moulds are let stand for 24 hours. Then, the cheeses are turned out of their moulds, and either rubbed with salt or dipped in brine. The cheeses are given an initial aging of 3 weeks. Then, small cheeses are ripened 4 to 6 weeks; large ones 2 to 3 months. While ripening, the cheeses are washed with brine.

The French spelling of Muenster is actually Munster.

A version called “Géromé” has anise seeds in it. Some versions made in Alsace have caraway seed in them; they are called “Münster au Cumin”.

These are farmhouse Muensters made in France that have been awarded French AOC status.

They use unpasteurized cow’s milk.

When made in the Gérardmer valley (in Lorraine), the cheese is called Munster-Géromé. Other names for variations on this AOC grade of Muenster are Munster, Petit-Munster or Petit-Munster Géromé.

These cheeses are washed with brine and annatto (for colouring), and turned every two days. While maturing, they are put next to old ones so the bacteria from the old ones can pass to the new ones.

These AOC versions have a shiny red rind the colour of a brick, which is caused by bacteria, but enhanced by the addition of the annatto.

They have also achieved European PDO status (PDO Reg No 2081/92.) The PDO name is Munster of Munster-Géromé, made in Alsace and Lorraine.

The cheeses have a fat content of 45% fat. They smell a great deal, but have a lot of flavour in compensation.

A German version, Münster, is made by a few companies in Germany. One is the Glocknerhof company (Käserei Glocknerhof) in Münstertal, Germany. Another company is called “Käserei Zurwies” in Wangen, Germany. The Wangen version has a mild taste. It is very pale, almost white, ripened 4 to 5 weeks, and sold in 650 g (23 oz) rounds, with an orangey-yellow or orangey-red rind.

Though Muenster sure sounds like a German cheese, it really isn’t anymore. In the German town actually called Münster (90 miles / 150 km north of Cologne), they don’t actually make any cheese at all there any more.

Germany used to make far more Muenster, but exports of it dropped off during the Nazi era, further allowing the French makers to become better known.

According to the PDO application filed for Muenster Cheese, the cheese was first made in the Flecht valley (now called Munster) in the area of Europe known as the Haut-Rhin of Alsace, which is currently (2007) a part of France. There, a monastery dedicated to St Gregory was established by monks from Ireland in the 500s. For the 200 years following 575, Ireland sent monks abroad, establishing 113 monasteries in total throughout Europe. In the 600s, the monks in the Flecht valley were joined by Benedictines who arrived from Italy.

Some maintain, consequently, that the cheese wasn’t originally German or French at all: that it was originally Irish, and that the Munster name comes from Munster province in Ireland. Many others, though, wave that off, and feel that the word Munster is derived from the Latin word for monastery, “Monasterium“. Still, the Irish supporters aren’t to be put off that easily: they point to a version of the Munster recipe that is still held on a scrap of parchment in the Abbey Library (known as “Stiftsbibliothek“) associated with the Dom (Cathedral) of St Gallen, formerly an abbey church, in Switzerland. It is written in 9th century Irish.

The area of Alsace (or rather, the regions that would become them in modern history) went back and forth between Germany and France from 843 AD to 1945 AD. At the time that the recipe was written down, Alsace was German (German from 925 AD to 1648 AD, from 1871 to 1919, and from 1940 to 1944), but the monks appear to have been French (though for all we know, they may have spoken Latin instead of German or French.)

A brief history of the area follows, it is difficult to know whether to term the cheeses German or French, particularly because historically Alsace has been German far longer than it has been French:

An Irish monk, St Columbanus of Ireland, also established monasteries in the Vosges region. One of the PDO versions, Munster-Géromé, comes from around Géromé, a the town in Lorraine on the other side of the Vosges mountains.

Alsace is “Elsaß” in German.

This web site generates income from affiliated links and ads at no cost to you to fund continued research · Information on this site is Copyright © 2023· Feel free to cite correctly, but copying whole pages for your website is content theft and will be DCMA'd.
Tagged With: German Cheeses, Smear-Ripened Cheeses, Sweet Curd Cheeses, Washed-Rind Cheeses