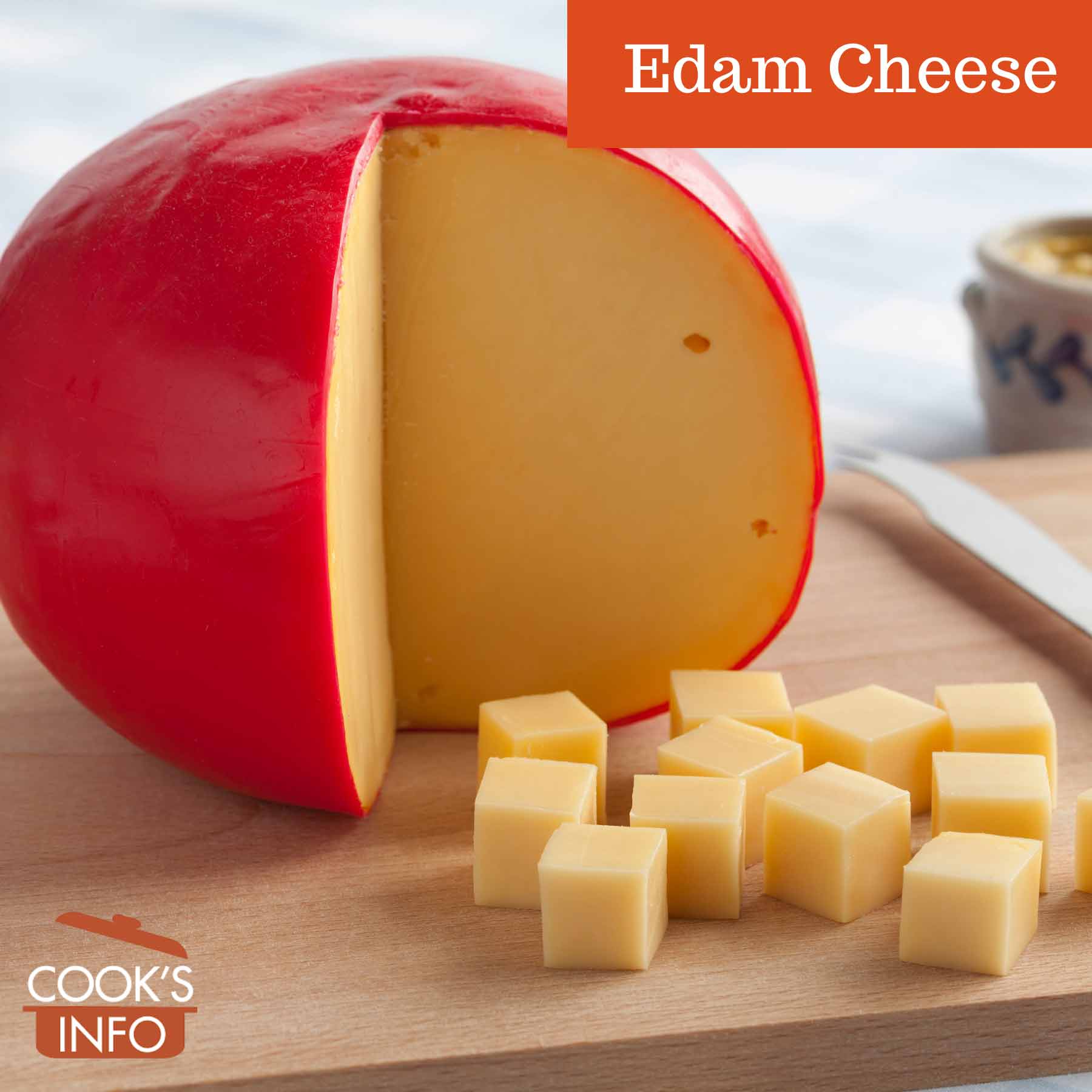 Edam Cheese is a semi-hard, pale yellow Dutch cheese with a mildly-tangy and slightly salty taste. Traditionally the cheese is made in a ball shape, but you may also spot it in squat rounds, or a loaf shape. It is a commercial cheese made in cheese factories.

Edam that is exported outside the Netherlands is covered with a shiny red wax coating. Occasionally, you may see a yellow wax. The wax originally helped preserve the cheese by preventing surface mould from developing: it still serves this purpose, though now, it has an additional, thoroughly-modern purpose — to help market the cheese by giving it a distinctive look on the cheese counter.

In the Netherlands, Edam is sold without a wax coating. During high tourist season, though, you may spot it coated in wax for tourists to take home with them more easily.

Outside the Netherlands, there can be different wax colours to indicate different properties:

You can also get vegetarian and lower-fat versions of Edam.

A large producer of Edam is the Frico Cheese company in Marum, Netherlands.

As of December 2010, there are now officially two types of Edam cheese. There is the generic Edam-style cheese made from pasteurized milk, which can be made anywhere in the world, and there is a protected name type “Edam Holland” which must be made only in the Netherlands following strict guidelines.

The name of generic Edam is taken to indicate a style of cheese, rather than place of origin.

The cheese is made with partially-skimmed pasteurized cow’s milk. The milk is heated to 30 C (86 F), and bacteria is added. Then, rennet is added to create curd. The curds are cut into small pieces, heated to 40 C (104 F ), then drained of the whey, moulded and pressed into small balls or wheels and salted. It is let ripen at 10 C (50 F).

Baby Edams, generally under 1 kg (2 ½ pounds) in weight, are meant to be eaten young, within weeks of being produced. When young, the cheese has a very supple texture, with a very mild, slightly nutty taste.

Some Edams, though, especially larger ones, are aged to let them develop a more complex flavour. Aged ones will be drier, and saltier tasting. 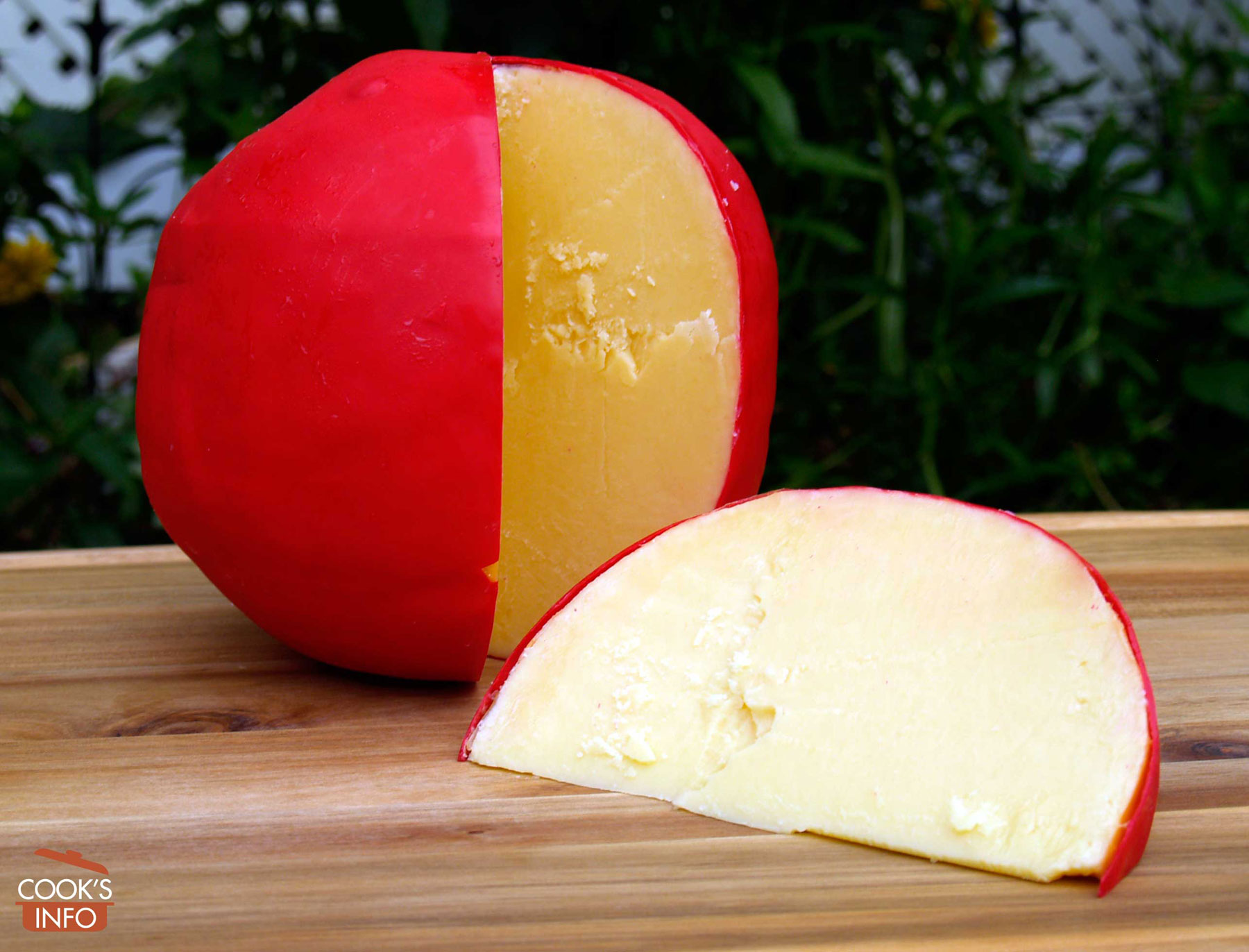 “A mark made from casein is placed on each Edam Holland cheese before the curds are pressed. The mark contains the designation ‘Edam Holland’, together with a combination of numbers and letters that is unique for each cheese (in ascending alphabetical and numerical order).” [1]COMMISSION REGULATION (EU) No 1121/2010 of 2 December 2010. 4.4. L 317/22. Page 6.

“Edam Holland” cheese must be made with cow’s milk (in the form of milk, semi-skimmed milk, or cream). The milk when received by the cheesemaker must not be pasteurized, though it may be thermalized before receipt.

Upon receipt of the milk, the cheesemakers then pasteurize it themselves in a matter that meets certain criteria:

“When they reach and are stored by the cheese-maker, the milk, cream or semi-skimmed milk have undergone either no heat treatment at all or a non-pasteurising heat treatment… Immediately before being made into ‘Edam Holland’, all raw materials must be pasteurised in such a way that the undenatured whey protein content does not deviate or deviates only slightly from that of unpasteurised raw material of a similar type and quality. ” [2]Publication of the amended single document following the approval of a minor amendment pursuant to the second subparagraph of Article 53(2) of Regulation (EU) No 1151/2012 (2020/C 60/06)

The milk is then curdled with calf rennet. After curdling, the whey is drained away, then the curds are washed and formed into the desired cheese shapes. The cheeses are then immersed in brine for a short time, then set out to age and develop a rind, during which time it is turned frequently. It will be aged for anywhere from 28 days up to a year. Baby “Edam Holland” cheeses are aged at least 21 days. The rind must have no mould on it. The cheese cannot be wrapped in foil.

During the time when the PGI status was being considered for this cheese, producers from other countries raised a technical point that a country name was not specific enough to be awarded a protected designation. Proponents of the scheme, however, caught them flat-footed by reminding objectors that Holland was in fact not the name of a country, but rather of the specific, defined, and geographically delimited historical region of Holland in which the port of Edam was situated. (The former county of Holland existed until 1795 and now roughly corresponds to the Dutch provinces of North Holland and South Holland.)

“Concerning the alleged failure of compliance with Article 2 of Regulation (EC) No 510/2006 in respect of the name, geographical area, specificity of the product, link between the product characteristics and the geographical area, reputation and restrictions concerning the origin of raw material, the national authorities responsible provided confirmation that these elements were present and in addition no manifest error was identified. It should be pointed out that Holland is not the name of the Member State concerned and that ‘Gouda Holland’ is considered a traditional geographical name encompassed by Article 2(2) of Regulation (EC) No510/2006. The requirements of Article 2(1) point (b) of the said Regulation are in this connection fulfilled since the related geographical area is delimited according to the link and the main elements of the product specificity. The specificity of Gouda Holland is due to a combination of factors linked to the geographical area…” [3]COMMISSION REGULATION (EU) No 1121/2010 of 2 December 2010. 4.4, L 317/22. Page 6.

Remove and discard any wax coating from pieces you use.

Well-aged ones can be grated.

Gouda, fontina or a mild cheddar

In the Netherlands, Edam is generally about 40% fat. That being said, the fat content will vary based on who made it, where in the world.

Like most cheese, Edam can be frozen. Cut into 225 g (½ pound) chunks, and wrap air-tight.

When thawed, it is best for cooking.

Originally, Edam was an aged farmhouse cheese, with a stronger flavour, and the outsides of the cheeses were brushed with poppy juice.

It acquired the name of Edam because the cheese was traditionally made in and around the port city of Edam, a few kilometres north of Amsterdam, and exported through that port.

COMMISSION REGULATION (EU) No 1121/2010 of 2 December 2010. Entering a designation in the register of protected designations of origin and protected geographical indications [Edam Holland (PGI)]. Official Journal of the European European. 317/14 – 21.

This web site generates income from affiliated links and ads at no cost to you to fund continued research · Information on this site is Copyright © 2022· Feel free to cite correctly, but copying whole pages for your website is content theft and will be DCMA'd.
Tagged With: Dutch Cheeses, Protected Geographic Indication, Sweet Curd Cheeses