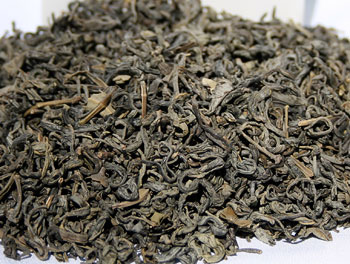 Green Tea is a term used to describe a category of teas. They are made from tea leaves that are steamed or roasted right after being picked, bypassing the fermentation process that is used to make black teas, which would make the taste stronger. Instead, Green Teas have a lighter, grassier taste.

The Japanese are not big on black tea, but they have endless varieties of Green Tea that to an uniformed Westerner might just all seem like one kind of Green Tea. Japanese Green Teas brew a heavier beverage than do Chinese Green Teas.

To make Green Tea, the tea leaves are harvested, spread out to wilt, then pan toasted or steamed, then rolled in balls, which presses out some moisture. Then, they are spread out onto trays and baked low and slow, being agitated all the time to prevent charring. The leaves are ready when they are a faded green colour.

Because the tea wasn’t fermented:

Green Teas are categorized by how they were grown, and subsequently processed. The younger the leaves, the better. The different kinds are named mostly after the processes used, with the area of production sometimes mentioned.

This web site generates income from affiliated links and ads at no cost to you to fund continued research · Information on this site is Copyright © 2022· Feel free to cite correctly, but copying whole pages for your website is content theft and will be DCMA'd.
Tagged With: Green Tea, Tea