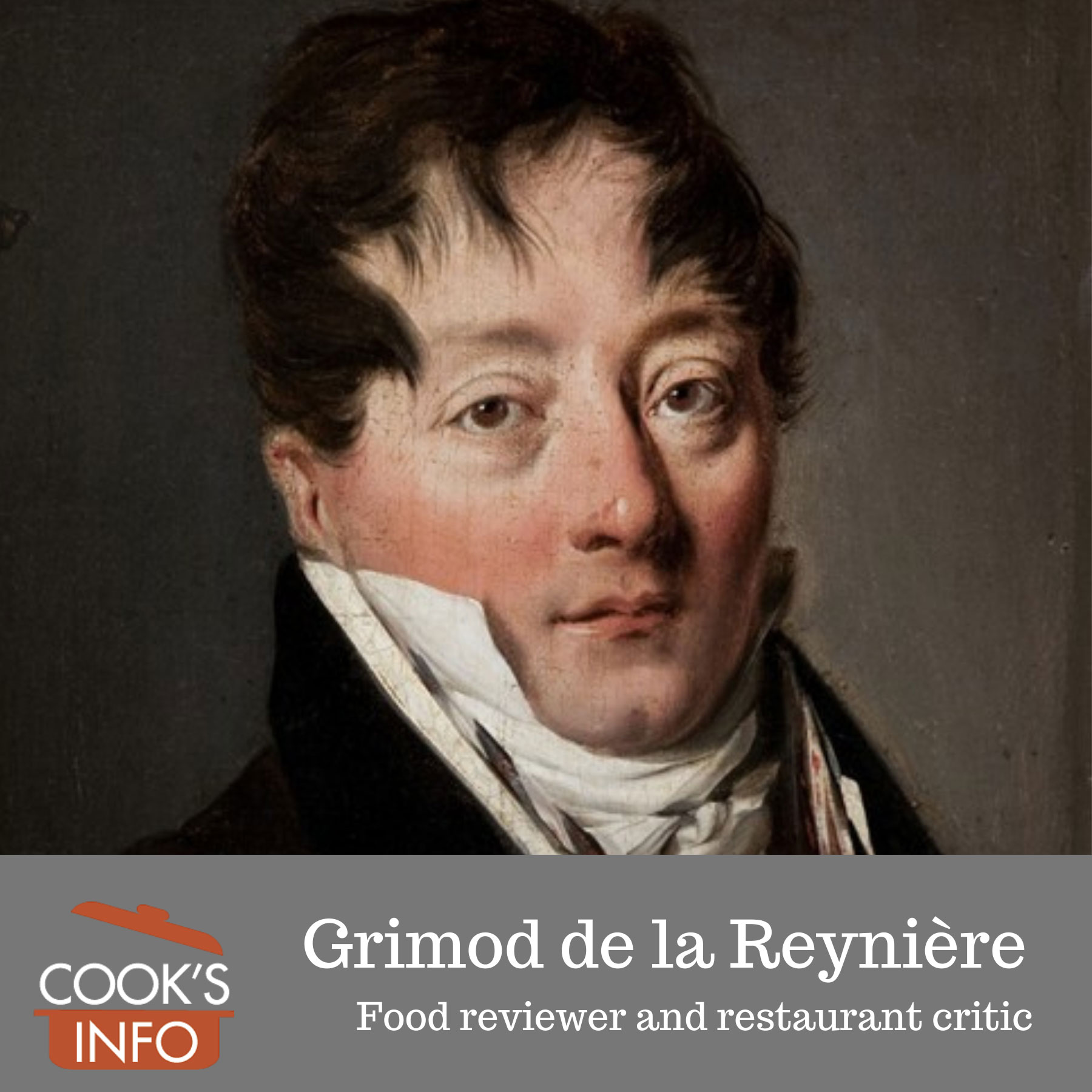 Grimod de la Reynière was one of the world’s first food reviewers and restaurant critics.

Scathing and witty in his observations, he wrote the “Manual for Hosts” (“Manuel des Amphitryons”) and published the annual “L’Almanach des gourmands” in the early 1800s in Paris.

Grimod was born into a wealthy family on 20 November 1758 in Paris. His full name was Alexandre-Balthazar-Laurent Grimod de La Reynière.

His father Laurent (1733 to 1792 or 1793) was a bourgeois financier; his mother, Suzanne de Jarente de Senar, was an aristocrat. His grandfather on his father’s side, Antoine Gaspard Grimod de la Reynière, was a tax collector.

Grimod was born with deformed hands, on which he wore artificial prostheses. Consequently, his handwriting later was very compressed.

His parents lived on the Champs Elysées. They entertained a great deal, and were judged to have one of the best tables in Paris, but they kept Alexandre out of sight owing to his hands.

Grimod grew up in Paris, and went to university, earning a law degree and then starting his career as an attorney. The first writing he did was as a theatre critic, for a paper he published called “Le Censeur Dramatique.” 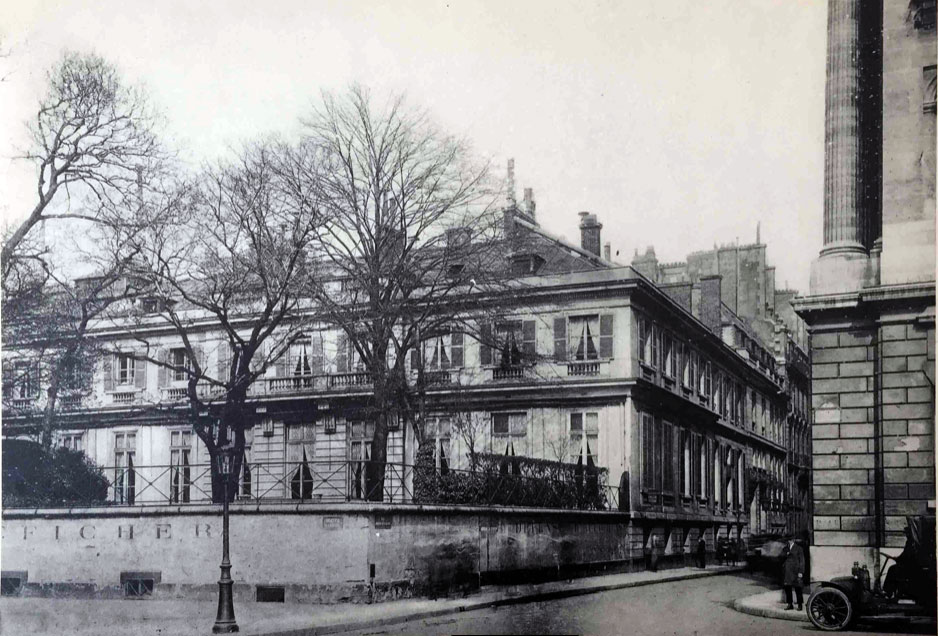 Built by the architect Jean-Benoît-Vincent Barré, it was decorated inside by Jean-François Peyron and the painter Charles-Louis Clérisseau (1721-1820.) Clérisseau paintings from the house are now in the Victoria and Albert Museum in London; the house itself was demolished in 1932. On the south side, the house faced the Champs-Élysées gardens. For this reason, they always gave their address as “rue Champs-Élysées.”

In 1783,  Grimod he gave a fourteen-course dinner which lasted all night. The invitations he sent out for it were edged in black, as though it were a funeral.

Another time, while his parents were away, he held a feast to mock bourgeois morals, and had a live pig (dressed up in his father’s clothes) seated at the head of the table. His parents returned while the feast was underway and exploded. The amused guests spread the scandal around Paris. His parents obtained a “lettre de cachet” (an arbitrary order which could not be appealed) from the King against him, exiling him for over two years to the Augustine abbey of Domèvre-sur-Vezouze in Lunéville [1]Rencontre avec Michele Mauberge. Mes recettes lorraines et moi. Nancy Mag. November / December 2012. Page 18. (the abbey was demolished in the French Revolution). While there, he ate at the table of the abbot, and became converted to gastronomy. 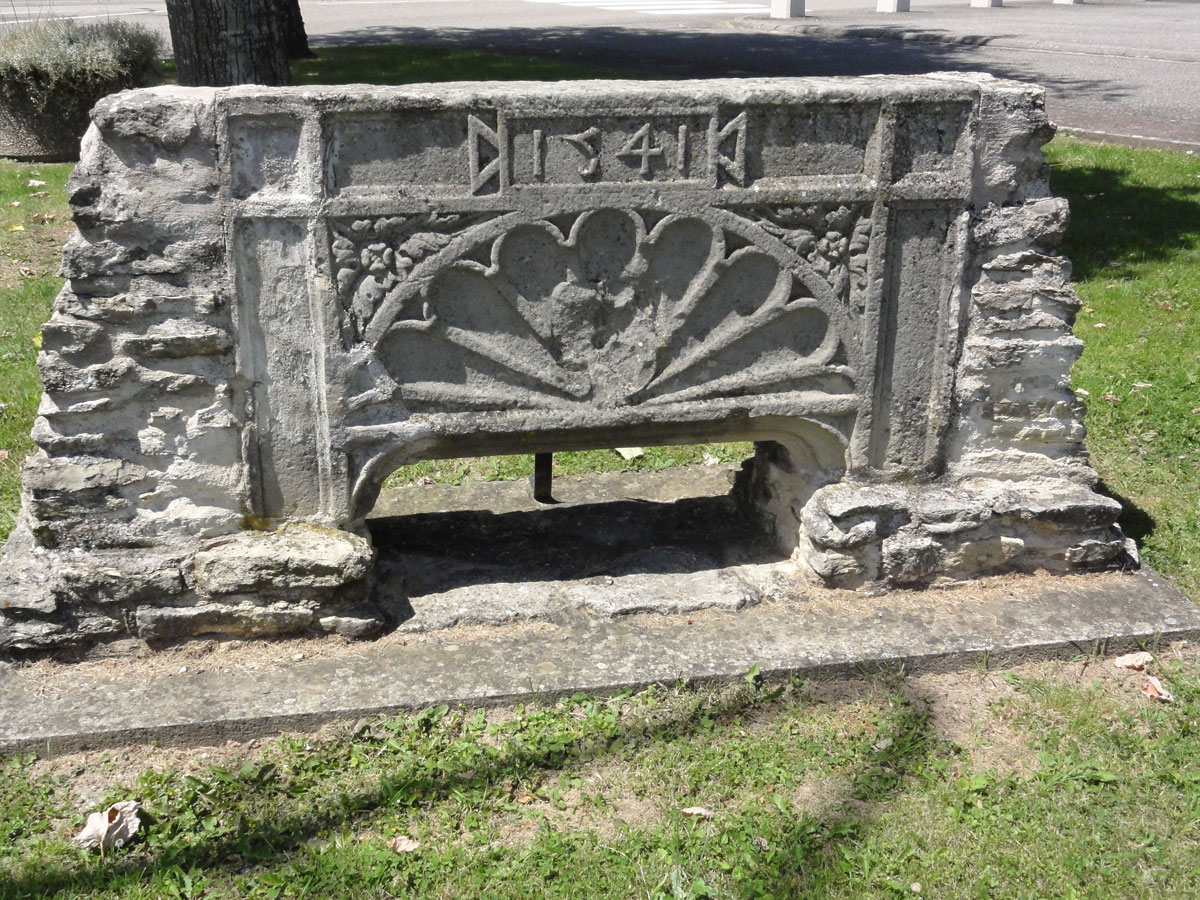 After that, with little money from his parents, he opened a store in Lyons that sold spices, drugs and perfumes. He was there while the French revolution started in Paris in 1789, and we know that he was there still in 1790 because on 29th September of that year, he sent his mistress, Adèle Feuchère, an actress in Paris, a letter from Lyons swearing he has not been with another woman since 4 September 1788.

In 1790, his mistress, Adèle Feuchère, has his child. Grimod was still in Lyons.

In 1792, Alexandre returned to Paris upon the death of his father. The aftershocks of the French revolution were still underway. He reconciled with his mother, particularly because his connections helped saved her from the guillotine. He began having dinners out of his mother’s house, staging them as mock funerals. Though some of the family fortune was lost during the French revolution, Grimod survived it, partly because Danton and Robespierre liked him, even though he had publicly declared himself a Royalist.

In 1803, Grimod had hit upon the idea of doing a food lover’s almanac, and did indeed start one; it was very successful.

From 1803 to 1812, he published eight volumes of L’Almanach des gourmands, one a year. The books were both food criticism and restaurant guides.

As a way of doing research for the almanac, nearly every Wednesday he invited twelve friends for dinners which lasted up to five hours. During the meals, they tasted food sent to them by caterers, and judged it. Their opinions would ruin many chefs and fledgling restaurants.

In “Lady Chesterfield’s Letters to Her Daughter”, Lady Constance Chesterfield writes of the Almanach des Gourmands:

“The Almanach des Gourmands — Almanac of Gluttons! — was written by clever cynical men, flippant and unbelieving, as Frenchmen generally are; and who, many of them, had to write for their dinners, rather than of the dinners they pretended to have eaten.” — Sala, George Augustus. Lady Chesterfield’s Letters to Her Daughter. London: Houlston and Wright. 1860.

One restaurant he did approve of heartily was “Véry”, on the Palais-Royal next to the Louvre.

In 1808, Grimod published the “Manual for Hosts” (“Manuel des Amphitryons“), based on material from the Almanacs published so far. It provided a guide to restaurants which were appearing for the first time in history.

In 1812, Grimod’s mother died and left him a great deal more money. But, as events turned out, he was not remain in Paris to enjoy the money there.

Grimod had angered a great many people in the city. Many accused him of taking bribes to give favourable reviews in his almanacs. He discontinued the Almanac, and faked his own death and funeral to see how many people would turn out — few did.

François-Guillaume Dumas attempted to revive the Almanach in 1904.

“A host who can neither carve nor serve is like the owner of a fine library who cannot read… The practice of this art is indispensable for all household heads wishing to prove they were not born yesterday.” — Grimod de La Reynière, Manuel des Amphitryons

“Life is so brief that we should not glance either too far backwards or forwards . . . therefore study how to fix our happiness in our glass and in our plate.” — Grimod de La Reynière 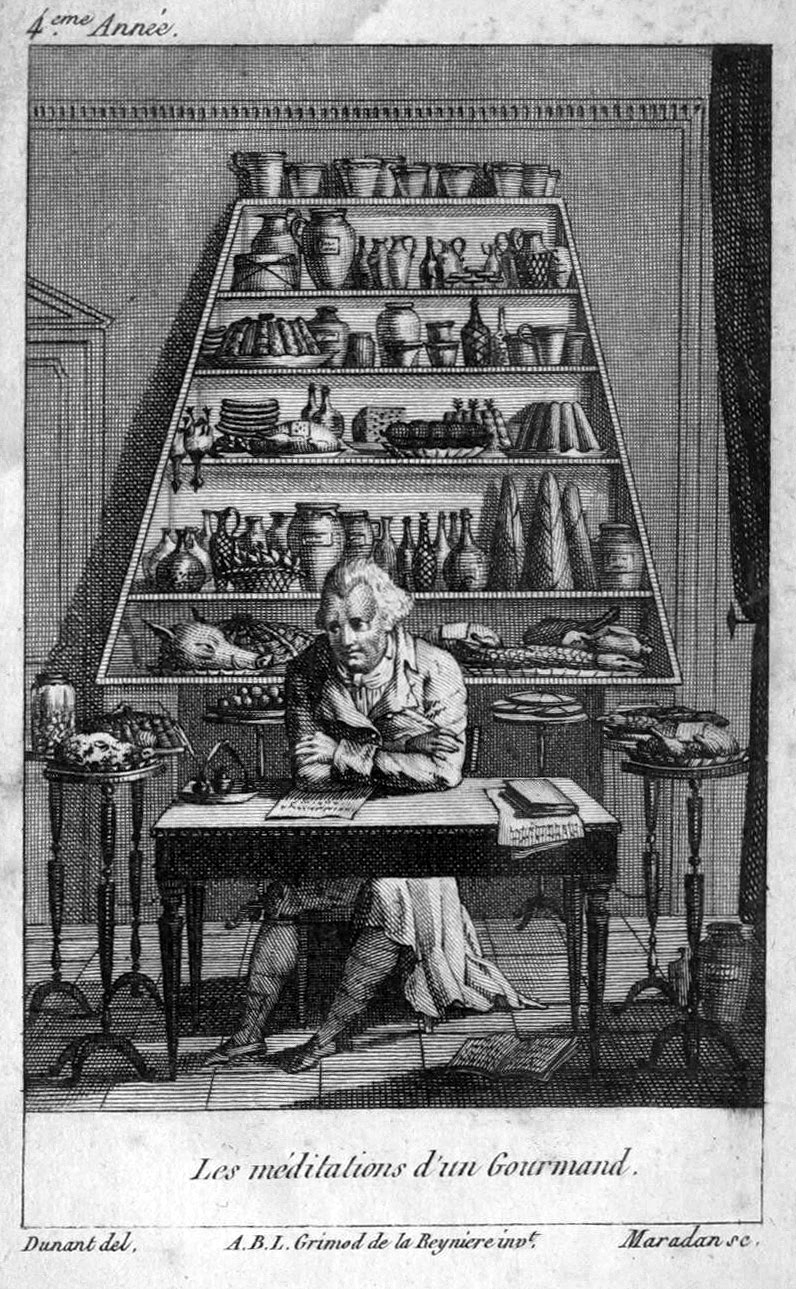