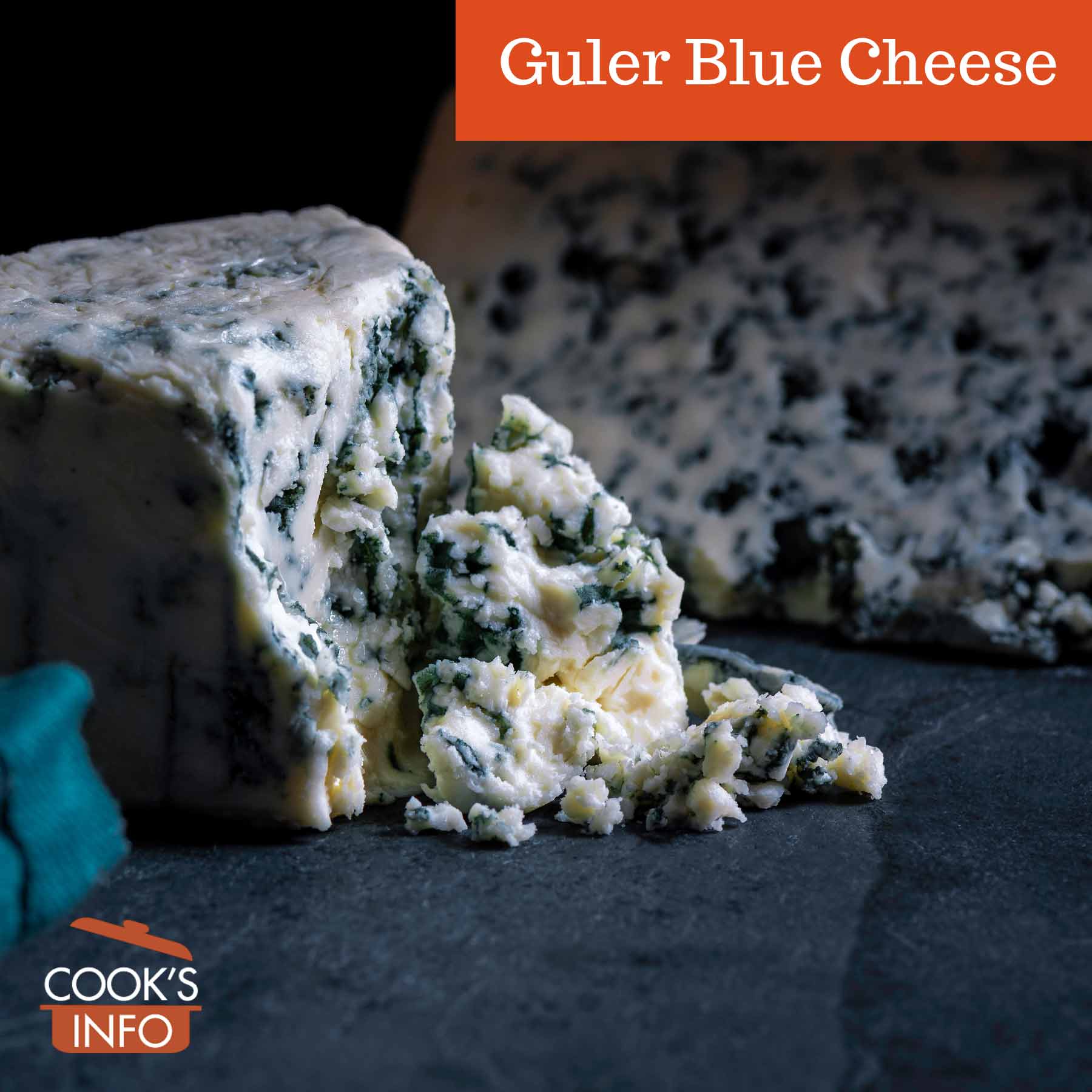 Guler Blue Cheese was an attempt at making a Roquefort cheese in the United States.

The attempt to make the cheese started in 1940, championed by a man named Homer I. Spencer.

Many of the details that we know of the cheese come from Washington State Supreme Court records of the divorce between Homer and his wife, Dalia ( DALIA I. SPENCER, Appellant, v. HOMER I. SPENCER, Respondent. March 7, 1946.)

Homer’s creation of Guler Cheese was inspired by caves in the Guler region of Trout Lake in Washington State, on land belonging to his wife’s parents. USDA officials reputedly inspected the caves and felt that they reproduced the conditions of those inside the caves at Roquefort, France, and thus would be conducive to making a blue cheese there:

“[Homer Spencer] is an able-bodied man and, prior to 1940, was employed as a tinsmith and construction worker. In that year he entered upon the business of manufacturing and distributing cheese, and has been engaged in that vocation ever since.

It appears that in, and for many years prior to, 1935, Mr. Wade H. Dean and Effie M. Dean, husband and wife, parent s of Dalia Spencer né Dean, were the owners of a tract of land in Klickitat county containing about twenty-five acres, upon which was a large cave used for storing potatoes and, to some extent, for sight-seeing excursions. Mr. Dean and [Homer Spencer] at that time entertained the view that the cave was particularly adapted for use in aging and curing cheese of the Roquefort type…

Further investigation, research, experimentation, and correspondence fully established the fact that the cave is unique in its adaptability for the aging and curing of cheese of the Roquefort type; indeed, it appears from the evidence that representatives of the United States Department of Agriculture, who had officially visited and examined the cave, declared that the department had been searching since 1925 for a locale having attributes of the caves in Roquefort, France, and that this cave was the first one of the desired kind that they had been able to find, and that this one, and no others in the United States, met the required qualifications. An interesting two-page article, with photographs, descriptive of the cave and the enterprise presently conducted in connection therewith, was presented in the Seattle Times under data of September 24, 1944, and appears as an exhibit in the case.” [1]DALIA I. SPENCER, Appellant, v. HOMER I. SPENCER, Respondent. March 7, 1946.

Encouraged, Spencer forced ahead with his dream of becoming a cheesemaker:

“Pursuant to the lease and the extensive preparations made in connection therewith, [Homer Spencer] installed the necessary equipment and has ever since conducted on the premises the business of manufacturing a Roquefort type of cheese, under the trade name of “Guler Cheese.”” [2]DALIA I. SPENCER, Appellant, v. HOMER I. SPENCER, Respondent. March 7, 1946. 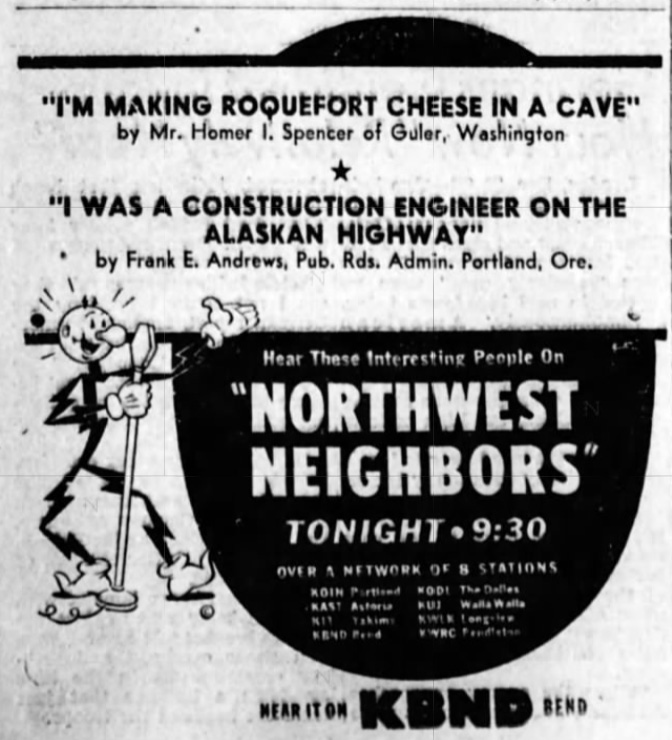 Instead of sheep’s milk, though, as is used for Roquefort, for unknown reasons he decided to use goat’s milk. Still, taste testers said he was onto something and pronounced his efforts successful. Reports [3]”Created in Sunken Caves at Trout Lake: A NEW CHEESE. Seven Years’ Work Plus Quirk of Nature Duplicate Roquefort. Nancy Morris, Food Editor, The Oregonian, 1951. stated that locals reportedly pronounced Spencer’s cheese to taste exactly the same as French Roquefort.

The first newspaper advertisement for the cheese that CooksInfo is aware of dates from March 1943, which branded the cheese as a “Roquefort type”. 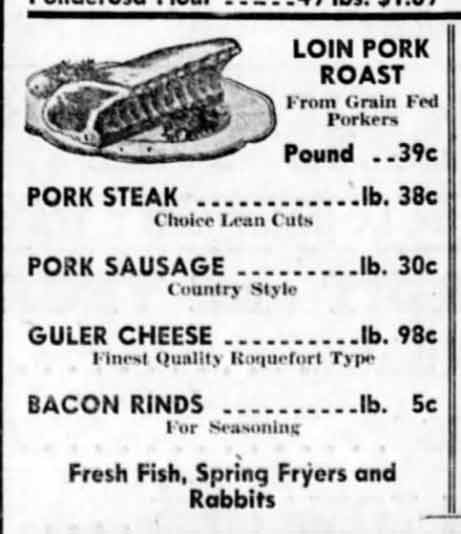 Another advertisement later that year, in July 1943, gives information about the cheese’s cave origin, and claims that it rivals imported cheese: 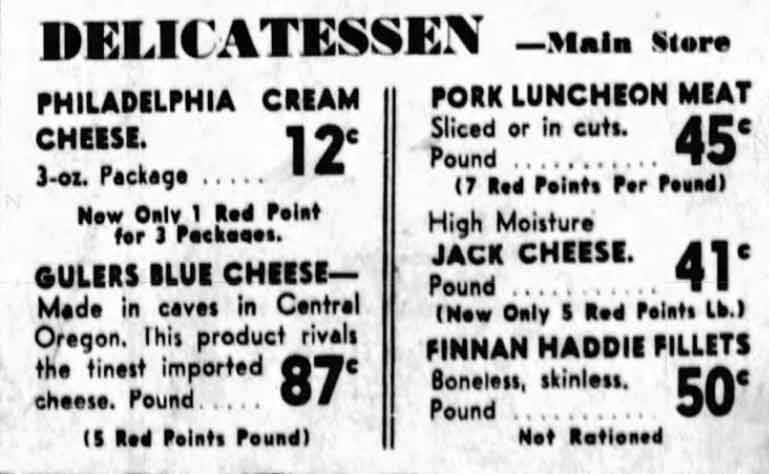 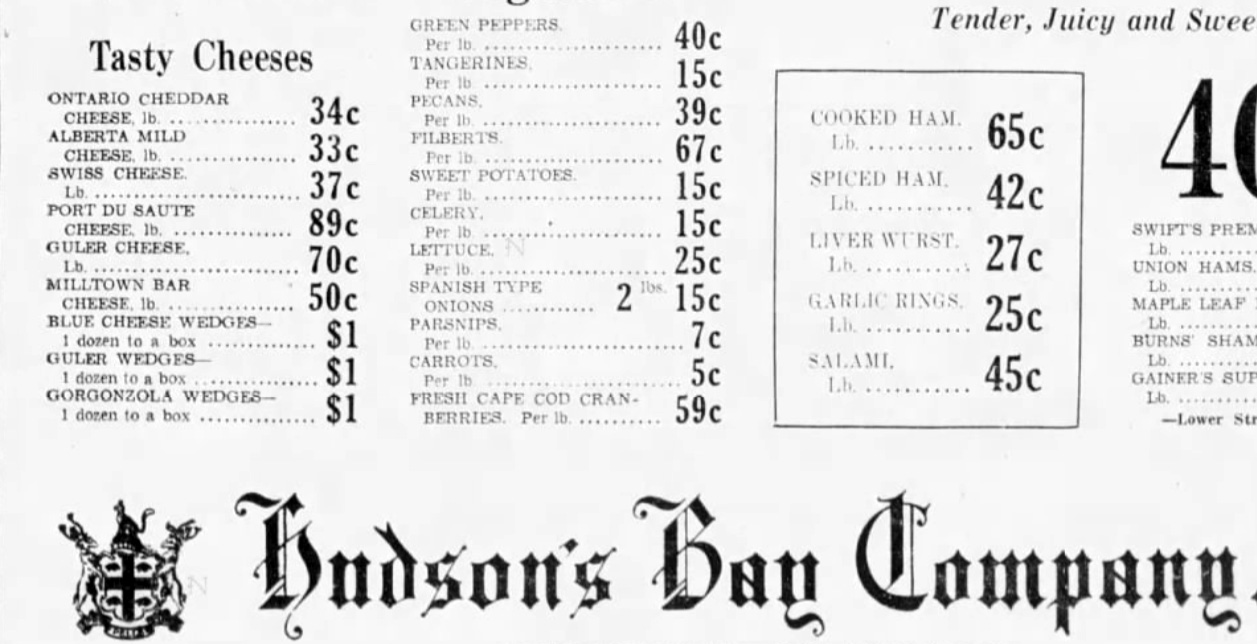 Up until the mid 1940s, production of Guler Cheese was taking off:

“The item of “inventories” mentioned in the report shows 2,358 wheels, or 11,275 pounds, of cheese on hand, of the value of $5,423.93, figured on the basis of approximately $2.31 a wheel, or approximately forty-eight cents a pound. These figures, however, are based entirely on the estimated cost of production of the cheese, rather than upon its sale value, which, according to one portion of respondent’s evidence ranged from sixty-six to eighty cents a pound, and, according to appellant’s contention, based on other evidence of the respondent, approximated $1.20 a pound. Upon these figures, the value of the cheese on hand would be somewhere between $7,741.50 and $13,530, which would make the value of the inventories, and hence the business, considerably greater than that shown by the accountants’ report. Between the date of commencement of the action, April 28, 1944, and the time of trial, respondent manufactured 2,553 additional pounds, which, of course, are not included in the original report of the accountants.” [5]DALIA I. SPENCER, Appellant, v. HOMER I. SPENCER, Respondent. March 7, 1946.

But then, grocery store ad mentions of the cheese disappear from 1945 to 1955. It may be that as a result of the divorce, Homer lost access to his wife’s family’s caves in Washington State, even though the financial terms of the divorce entitled his wife to one-third of all proceeds:

“He is compelled, by our decision, to operate the business and to give to the divorced wife one third of the net returns. The ceiling of his compensation, as operator and owner of the business, is one third of the profits. He is condemned by this court to refrain from operating a business at the site in question and deriving any profit therefrom, unless he gives one third of the net returns to his divorced wife who has never been required, and is not now required, to make any contribution of time or energy to the success of the business.” [6]DALIA I. SPENCER, Appellant, v. HOMER I. SPENCER, Respondent. March 7, 1946.

Then, in 1956, there appears to have been a reinvigoration of efforts to produce the cheese, with an incorporated company being formed:

“Three Oregon and Washington businessmen have formed Guler Cheese, Inc., for production of blue cheese. They plan to develop a cave on the lower slopes of Washington’s Mt. Adams, in the Guler region near Trout Lake. The cave, they say, will furnish ideal conditions of temperature and humidity for development of the blue mold which gives the Roquefort-type cheese its distinctive flavor. They are using the same formula, process and curing as that used for Roquefort production in France.” — News of the Cheese Kettle. Monroe, Wiscosin: Monroe Evening Times. Monday, 21 May 1956. Page 2, col. 4.

A stray mention of Spencer in a 1956 social notes column shows both that he appears to have remarried by then, and, moved his cheese operation to new caves in Halfway, Oregon:

“Saturday visitors at the home of Rev. and Mrs. Thomas were Mr. and Mrs. Homer Spencer of Beaverton, Oregon. Spencer is a maker of Roquefort cheese, and his curing cave is in Halfway, Oregon.” — Pastor Leaves. Longview, Washington: Longview Daily News. Monday, 16 Apr 1956. Page 6, col. 7.

After this, the cheese appears in grocery ads in the fall of 1956, and in 1957 [7]Chris’ Foods Advertisement. La Grande, Oregon: La Grande Observer. Thursday, 26 Sep 1957. Page 7.. But, there are no more ads or newspaper mentions of the cheese after that, and it disappears from the print record.

This web site generates income from affiliated links and ads at no cost to you to fund continued research · Information on this site is Copyright © 2022· Feel free to cite correctly, but copying whole pages for your website is content theft and will be DCMA'd.
Tagged With: American Cheeses, Blue Cheese