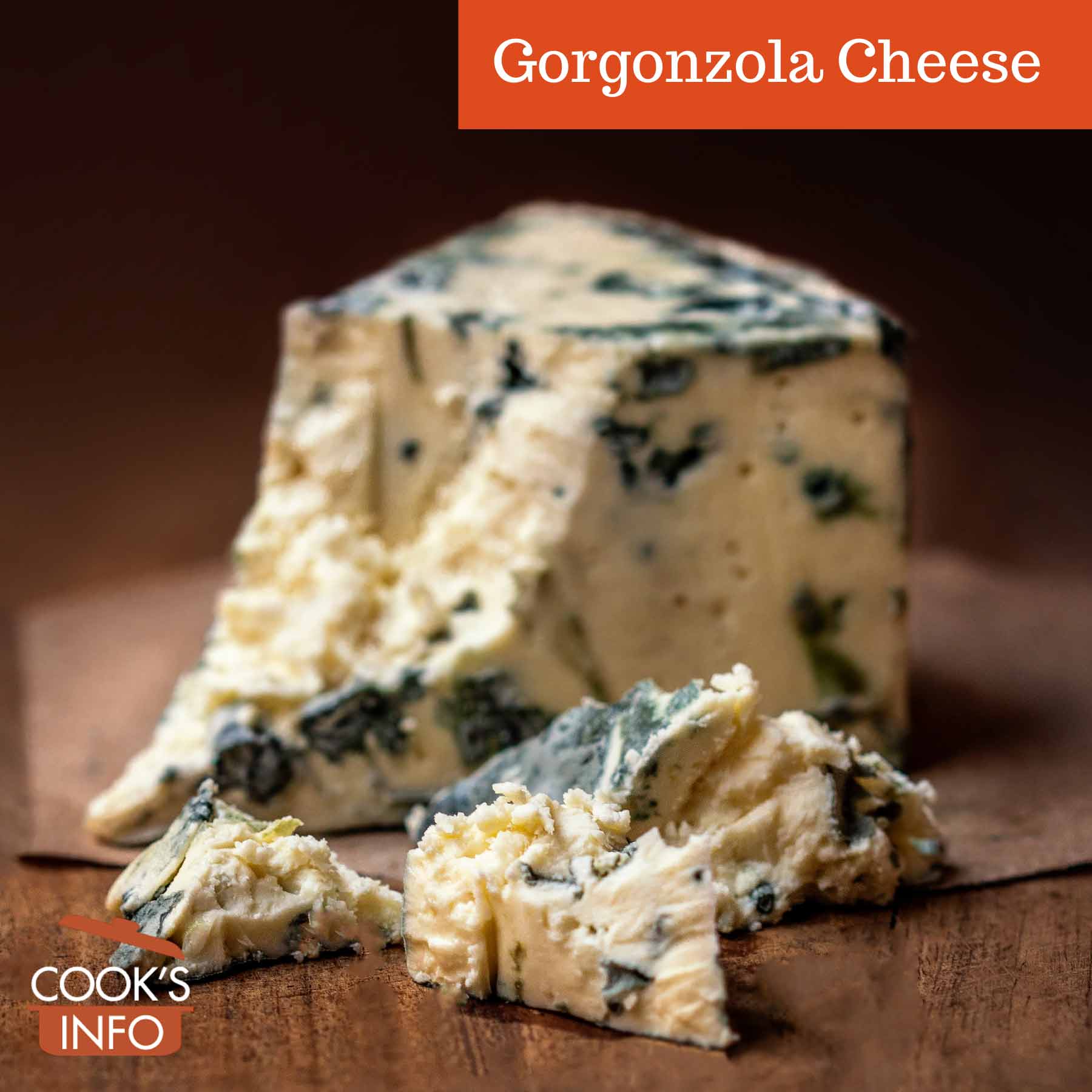 Gorgonzola cheese is a cylindrical blue cheese made from full-fat, pasteurized cow’s milk.

It has an inedible, rough pinkish-grey rind. Inside, the cheese is whitish or pale yellow with greenish-blue flecks and veins.

After pasteurization, the milk is let cool to 28 to 36 C (82 to 96 F). A blue cheese mould, “Penicillium glaucum” (most other blue cheeses use “Penicillium roqueforti“), is stirred in to the milk along with calf’s rennet to curdle it. The curd is cut and drained, and packed into perforated cylindrical moulds. The cheese is turned out of the mould, and stamped at either end with a mark identifying the dairy.

The cheeses are then moved into controlled storage areas for aging at a temperature between 2 to 7 C (35 to 44 F). [Ed: This aging used to be done in caves.]

Aging periods vary based on size of the cheese:

During aging, holes are poked several times in the cheese to allow air to enter so the blue mould can develop.

When the cheese is aged, and has passed inspection, it is wrapped in aluminum foil for shipping, and sold on.

Milder versions are called Gorgonzola Dolce.  These are also creamier.

Gorgonzola is PDO protected in the EU. It can only be made in the Piedmont provinces of Alessandria (specific towns), Novara (including Verbano-Cusio-Ossola), Vercelli and Biella, Cuneo and Casale Monferrato, and in Lombardy (in the provinces of Bergamo, Brescia, Como, Cremona, Pavi, Varsese, and Milan including Lecco, Lodi and Monza).

Any other blue cheese, though some are stronger and some are milder than Gorgonzola.

Gorgonzola can be frozen. After thawing, though, it is best used for cooking or in salads, as it will probably become crumbly.

The usual historical hyperbole that swirls about other European cheeses also applies to Gorgonzola. Some people date it back to the 11th century, and on a good day, even back as far as 870 AD. A few even credit it to the Romans.

Gorgonzola cheese wasn’t always called Gorgonzola, however: for the past several hundred years, the cheese was called “stracchino verde“. The name Gorgonzola came into force by law on 30 October 1955.

This web site generates income from affiliated links and ads at no cost to you to fund continued research · Information on this site is Copyright © 2022· Feel free to cite correctly, but copying whole pages for your website is content theft and will be DCMA'd.
Tagged With: Italian Cheeses, Italian Food, Lombardy Food, Piedmont Food, Protected Designation of Origin