Contents hide
Roquefort Cheese is a blue cheese made from raw sheep’s milk curdled with calf rennet. The breed of sheep that the milk is taken from is called “Lacaune.”

At 10 days of age, the wheels are placed to mature on wood shelves in limestone caves inside the Combalou mountains in Roquefort-sur-Soulzon, France. The underground caves occupy an area twice the size of the actual village of Roquefort. The caves have holes and cracks that allow air into them: into these air passageways are placed loaves of rye bread inoculated with the “Penicillium roqueforti” mould.

As the loaves moulder away, spores are released into the air, which air currents carry into the caves and onto the cheeses. Mould actually grows off the cheese in beards while the cheese is ripening. The “beards” are clipped off from time to time.

Roquefort is aged and ripened in these caves for a minimum of three months. After one month, the cheese is wrapped in tinfoil to slow down the aging to give the mould more time to grow.

The cheese does not develop a rind. The surface does turn orangey, though. Inside, the cheese is ivory with blue-green veins.

The bacteria, Penicillium roqueforti, originally occurred naturally in these same caves in Roquefort-sur-Soulzon, France. The caves have of course been greatly enlarged by man to hold more cheese to meet the world demand.

Roquefort is big business. Close to 20,000 tons are produced yearly. 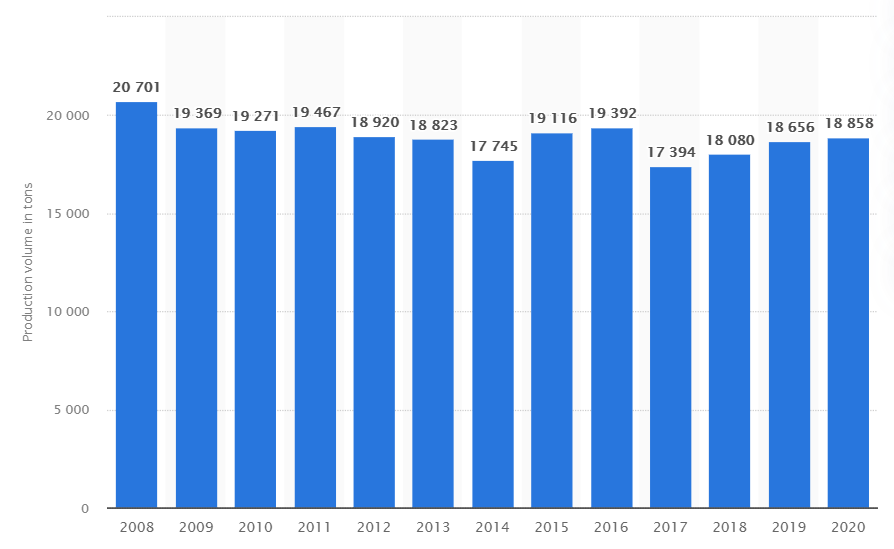 Only seven manufacturers are allowed to make it, the largest of which is called “Société des Caves.”

“The cheese is matured in natural caves in the mountains of Cambelou. Most of the milk comes from the Aveyron region, then from Tarn, Lozère, Hérault, and Gard; the Pyrenees and Corsica make up any shortfall, but the only place where the cheese can be matured is the commune of Roquefort.” [1]Lang, Jennifer Harvey, ed. Larousse Gastronomique. New York: Crown Publishers. English edition 1988. Page 897.

Within the Roquefort cheese brand, there are some that are sharper — such as the one called “1863”, and some that are milder, such as “Baragnaudes.”

This is now a European PDO cheese.

Without too much effort, Roquefort enthusiasts date the cheese back to 1070 AD. On a good day, they’ll even drag in the Romans and poor old Pliny to date the cheese back another thousand years. What we do know for sure is that Charles VI gave sole rights to the village in 1411 for aging the cheese in their caves.

Roquefort was the first cheese to receive an AOC designation in 1925‡, forcing what is now Bleu des Causses Cheese to be renamed. Part of the AOC conditions state that milk used for Roquefort cheese needs to come from that local area, but as there isn’t anywhere near enough sheep’s milk from nearby to meet the demand, producers basically ignore that part of their AOC protection (i.e. their obligations in exchange for their monopoly), and buy sheep’s milk elsewhere and bring it in. The industry does, though, dictate how the sheep from which the milk is procured are bred and fed.

Import of Roquefort into Australia was banned from 1994 until 2005 on the grounds that it was made from unpasteurized milk.

‡ Technically, Roquefort didn’t receive an AOC in 1925, as the AOC system wasn’t created until 1935. What it got was protection from a law passed 26 July 1925, reconfirming the rights that Charles VI had given. The law was extended to other products and named AOC in 1935.

“Who said a gourmet wasn’t sentimental? It was great news when the first shipment of Roquefort cheese since 1940, a total of 500,000 pounds, came from France in December, and now a second shipment of 300,000 pounds is scheduled for arrival this month.

Roquefort-making was continued right through the war, hitting lowest production in 1945 at 55 per cent of normal. This year the makers expect to produce 13,500,000 pounds, or about 60 per cent of their prewar output.” — Paddleford, Clementine (1898 – 1967). Food Flashes Column. Gourmet Magazine. February 1947.

This web site generates income from affiliated links and ads at no cost to you to fund continued research · Information on this site is Copyright © 2022· Feel free to cite correctly, but copying whole pages for your website is content theft and will be DCMA'd.
Tagged With: Appellation of Controlled Origin, Blue Cheese, French Cheeses, Protected Designation of Origin, Sheep's Milk Cheeses