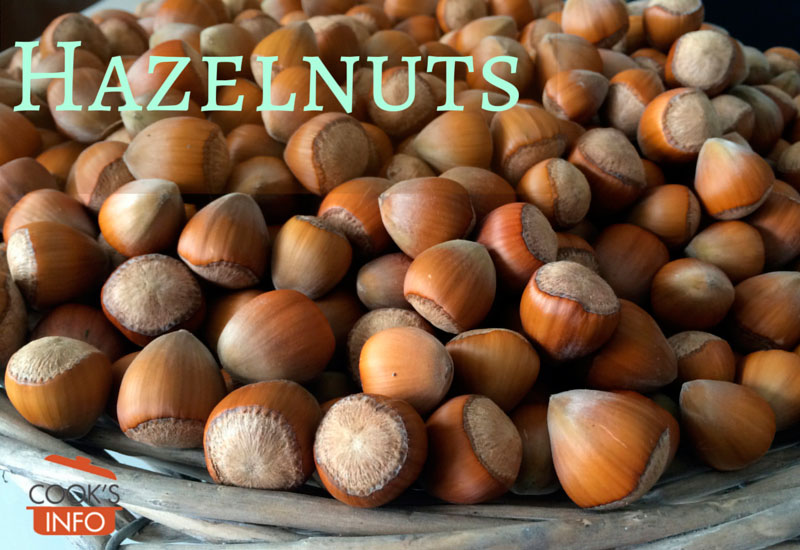 There are about twenty species of hazelnuts.

For the most part, only the variety called “Corylus americana” grows well in Eastern North America. This variety is also called “Lombard Nut, Pontic Nut and Spanish Nut.” On the west coast, the “Corylus cornuta” variety is dominant, with the Barcelona variety also being grown in Oregon and Washington States. Barcelona is a “cultivar” — a cross done by man — between “Corylus Avellana” and “Corylus maxima” varieties. It was bred by a French horticulturist named Felix Gillet in Oregon in 1885, who called it the “Barcelona.”

The Brits grow “Corylus avellana grandis“, which in Britain are called “cobnuts” (aka Cobb Nuts, Cob Nuts.) These are larger than the American variety of hazelnuts, but they are all still hazelnuts.

Elsewhere in the world, prevalent hazelnut species are “Corylus avellana pontica” and “Corylus maxima.” Hazelnuts from these two varieties tend to have a somewhat longer shell than nuts from other hazelnut varieties.

The Brits grow “Corylus avellana grandis“, which in Britain are called “cobnuts” (aka Cobb Nuts, Cob Nuts.) These are larger than the American variety of hazelnuts, but they are all still hazelnuts.

In Britain, Kent is a large centre of hazelnut (aka Cobnut) production.

The tree is actually a shrub, that grows 3 to 4.5 metres (10 to 15 feet) tall. In cultivation, it is usually pruned to a single stalk, making it look more like a proper tree. It will bear fruit when it reaches 3 to 4 years old and remain productive for up to 50 years after that. Each year a tree can bear 10 to 12 kg of dried nuts (20 to 25 pounds.)

The tree blooms with flowers shaped like sheep’s tails called “catkins.” The flowers need to be pollinated with pollen from another variety of hazelnut tree; consequently, growers must plan to plant compatible varieties. 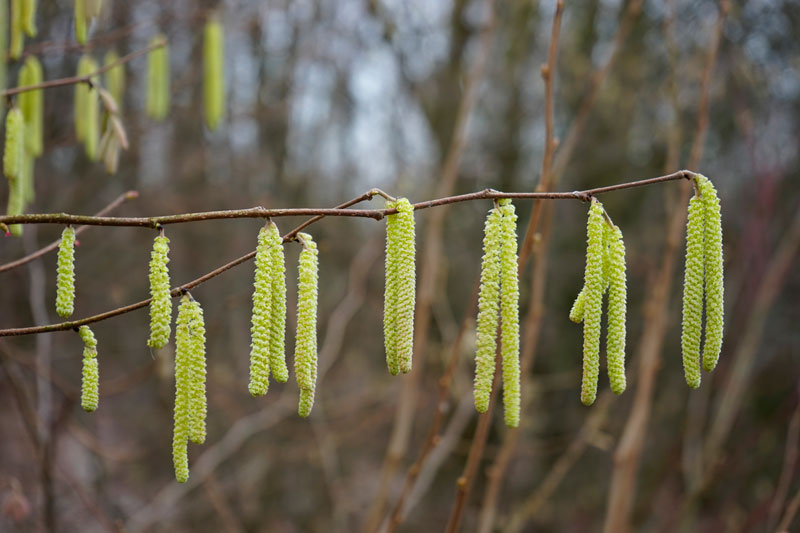 After blooming, the tree will then set leaves, and start to develop its nuts. 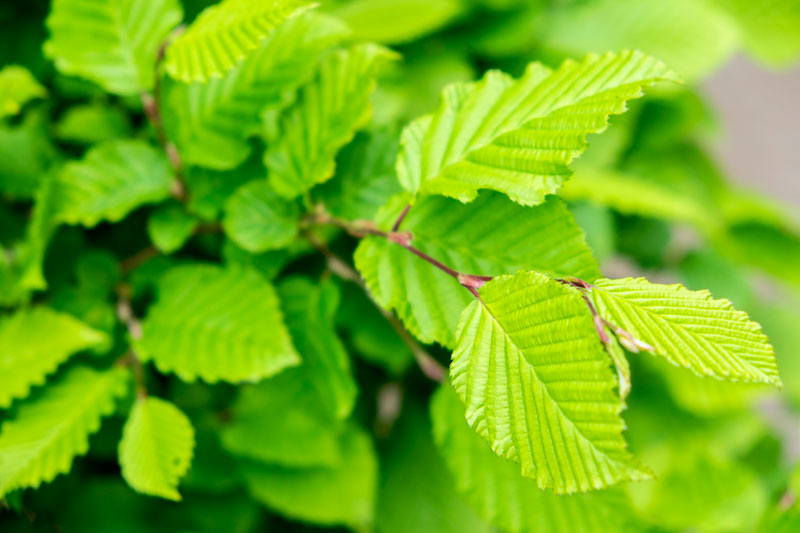 The nuts grow surrounded by a leafy husk, which dries and opens to release the nut. The shape of the nuts varies from round to oval, depending on the species and cultivar. 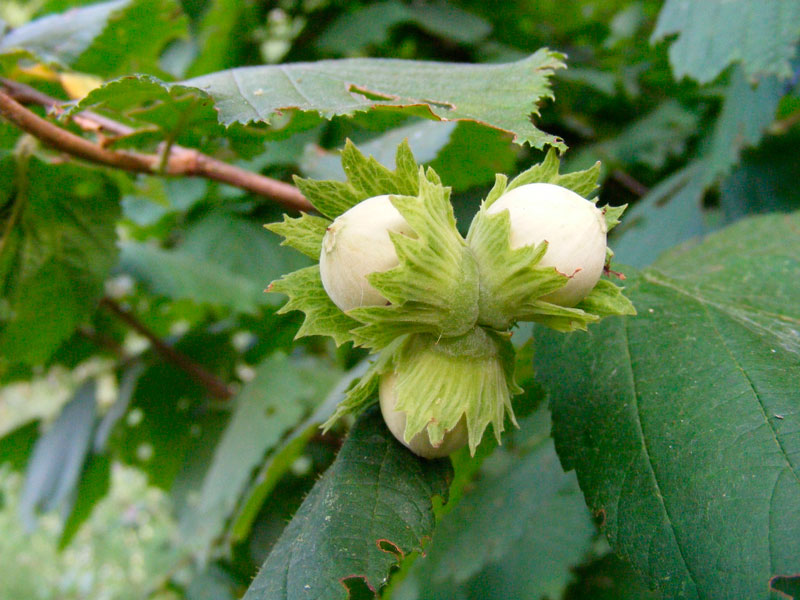 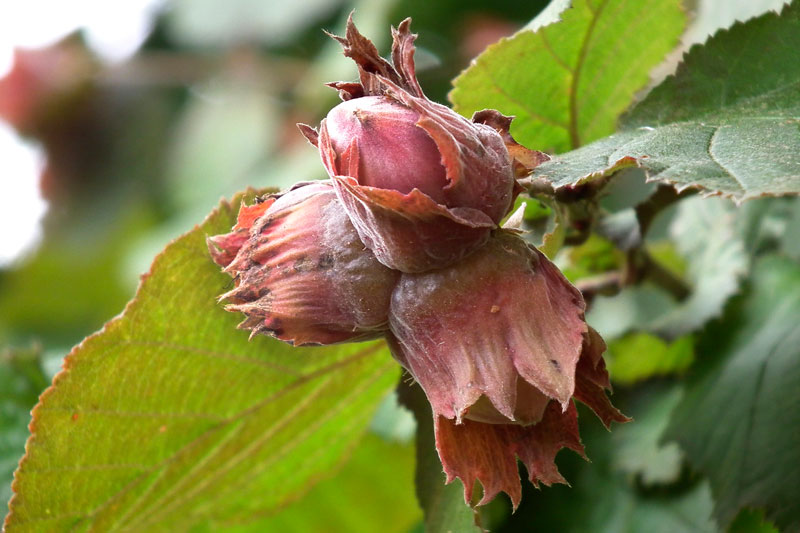 The hazelnut weevil (Curculio nucum) plagues hazelnut growers in most of the world. It lays one egg in a nut. When the larva hatches about a week later, it then spends about a month undetected inside the nut, eating most of the nut. A hole in the nut’s shell is the sign that the larva has eaten it all, and left the nut to continue its life cycle. 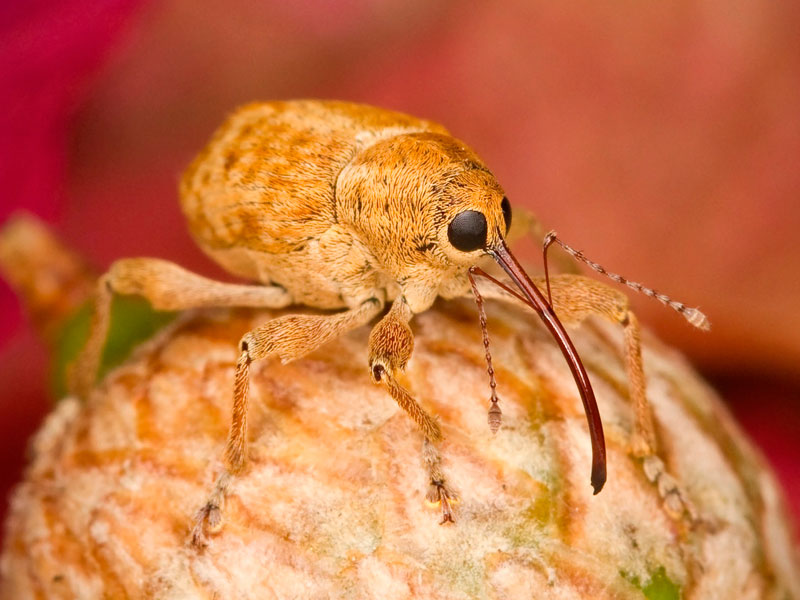 Inside the hazelnut shell, the actual nut is covered by a thin brown skin that needs to be removed as it is bitter.

Toasting the nuts first makes this easier: the brown skin will flake when roasted at 175 C (350 F) for 10 to 15 minutes, then it can be rubbed off with a tea towel.

It can be a lot of work to get it all off, but getting most of it off will do the trick. 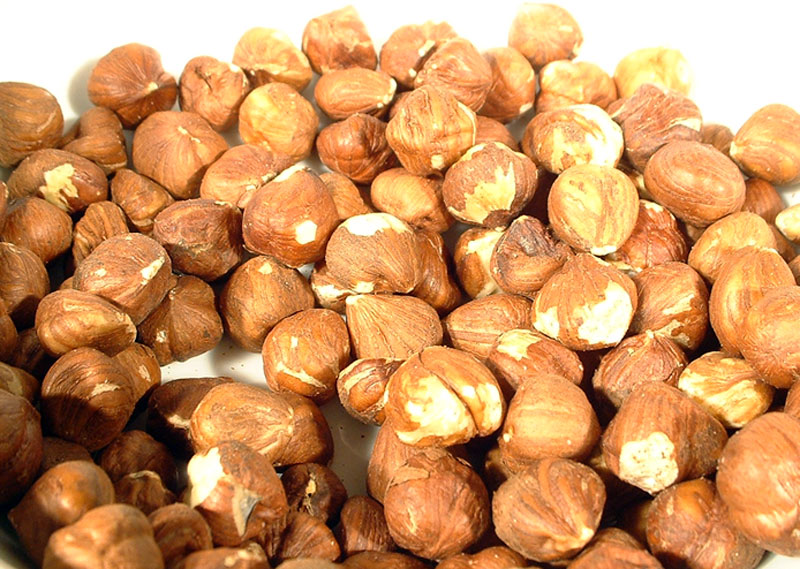 The brown skin on a hazelnut is bitter and must be removed. © Denzil Green. 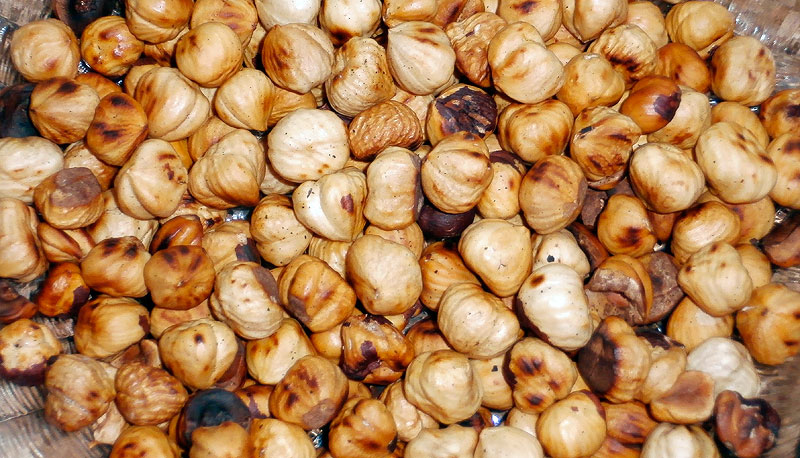 “Filberts are one of the hazelnuts deriving from Europe, there named for St. Philibert. Prewar, this nut came by tons out of Italy, Sicily, Turkey, and Spain. Now we depend on the Washington and Oregon groves. Handsome crops there but the acreage is still small, the industry new. However, production in the North-west is on the increase, with hundreds of acres of trees soon to come into bearing.” — Paddleford, Clementine (1898 – 1967). Food Flashes Column. Gourmet Magazine. December 1948.

There were many superstitions surround hazelnuts (see also NutCrack Night). One was that burnt hazel nut shell ash could change a child’s eye colour:

“It was not the branches alone of the hazel that were supposed, during the reign of superstition, to be endowed with mystical powers, for a belief was once prevalent, that the ashes of the burned nut-shells applied to the back of a child’s head would turn its eyes from grey to black.” — Nuts. Kirkcaldy, Fife, Scotland: Fifeshire Journal. Thursday, 6 December 1860. Page 6, col. 3.

Shakespeare invoked hazelnuts in The Taming of the Shrew:

“Why does the world report that Kate doth limp? O slanderous world! Kate like the hazel-twig is straight and slender and as brown in hue as hazel nuts and sweeter than the kernels. O, let me see thee walk: thou dost not halt.” — Petruchio. The Taming of the Shrew, Act II, Scene 1. Shakespeare.

In the French Revolutionary Calendar, the hazelnut was celebrated on duodi 22 Fructidor. 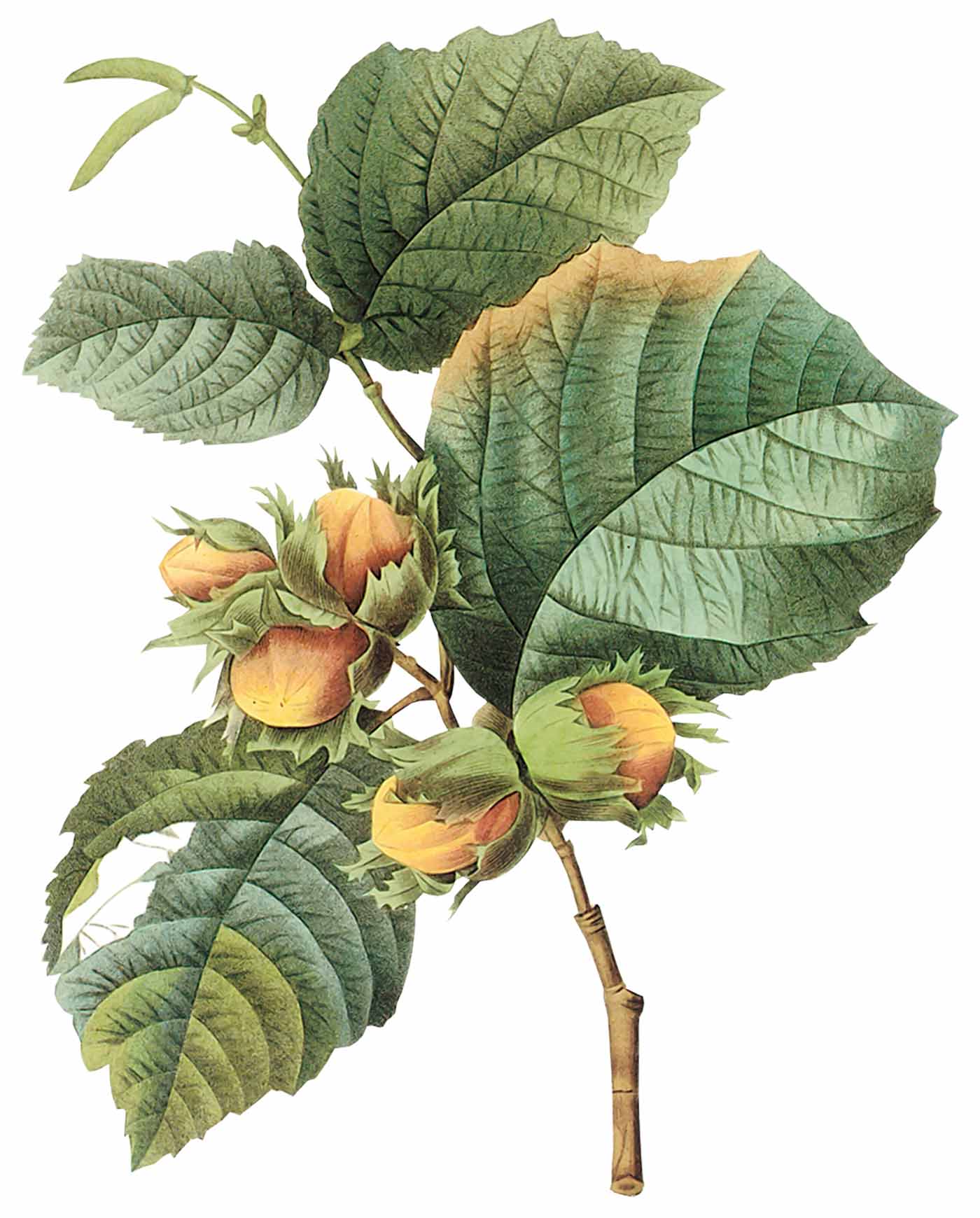 The name “Hazel” may come from the word for helmet or hood in Anglo-Saxon, which was “haesel“. “Filbert” may have come an Old English word meaning “full beard”, referring to the husk which surrounds the nut at first, or it may come from St Philibert’s Day, the start of the hazelnut harvest in Kent, England, which was on 20th August.

“Despite its name, ‘Kentish Cob’ is not a cob but a filbert. Cobnuts belong to Coryllus avellana, our native species, and have short helmet-like calyces (Coryllus from the Greek korys, a helmet; the Anglo-Saxons had the same though: our modern word ‘hazel’ comes from the Old English haesil, a head dress.) They have broad round nuts or ‘cobs’ (from the Old English ‘cop’, meaning head — the reverse process giving us ‘nut’ as a slang term for both heads and testicles.) Filberts on the other hand are derived from C. maxima, a species native to south-eastern Europe that has longer, slimmer nuts, with calyces that protrude beyond the end of the nut, sometimes enclosing it altogether. The word ‘filbert’ is often said to be a contraction of ‘full-beard’, but more plausibly is an anglicisation of the Normal word ‘philibert’ (short for ‘noix de philibert‘), from the time of their ripening on or about St Philibert’s Day. St Philibert was the founder and first Abbot of Jumièges, the greatest of the abbeys of Normandy, and his feast day is 20 August — which would of course, before the reform of the calendar, have fallen eleven days later in the season, at what is now the beginning of September.” [1]Swift, Katherine. The Morville Hours: the story of a garden. London: Bloomsbury. 2011. Page 256.