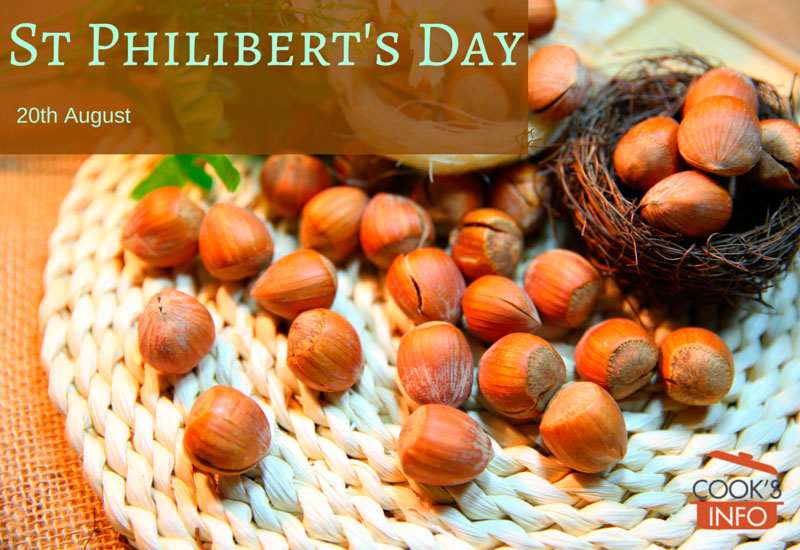 The 20th of August is St Philbert Day.

This day was just about the time when the harvest for hazelnuts would traditionally begin in England (particularly Kent), as growers raced to beat the squirrels to the nuts.

The day signalled the start of what was a few weeks of very lively, boisterous nut harvest festivities.

In the middle ages, a carol (“carole”) was a circle dance, accompanied by folk singers, for many occasions and for use in medieval mystery plays. Some of the occasions were indeed Christmas and Easter, but also occasions of saints’ feast days, and harvests, and St Philbert’s Day happened to mark both.

As they were sung by harvesters during and after a hard day’s work, it’s no great stretch of the imagination to take in the fact that many carols were in effect bawdy drinking songs, and enjoyed by rowdy, boisterous crowds, a far cry from the sanitized versions we know now from churches at Christmas.

Many carols were created in particular for the “nutting festivities” at St Philbert’s Day.

An inebriating hazelnut-based alcoholic drink was brewed, which no doubt added to the zeal with which the hazelnut harvest festival carols were sung:

“It was also the custom during the week or so of nutting festivities to brew a fermented beverage involving hazelnuts, unripe acorns, whey and barley… To this day in parts of rural England, ‘doing the filbert’ means losing your footing while drunk. Some of the rowdier behavior, includ[ed] pelting other villagers with nuts, throwing vegetables through windows, and singing drunken songs in the street.” [1]St. Philibert & the Nutting Carols. Sheboygan, Wisconsin: Grace Episcopal Church. August 2014. Accessed December 2021 at https://www.gracesheboygan.com/images/angelus/archive/angelus-2014-08.pdf

Unsurprisingly, many nutting revelers ended an evening by being rounded up by the local constabulary, and so this carol emerged:

“There’s no one to make the hay,
No one comes to church to pray,
Maids and men have gone away,
All the jails are full today,
We have had St. Filbert’s Day.
Stay at home this Filberttide!
Else Constable Tuck will give you a ride,
Constable Tuck will tuck you in,
Throw you, bung you in the bin
After he whops you on the chin!”

Eventually, owing to industrialization, and continued efforts by authorities to suppress the unruly nutting festivities, the celebrations and associated music and customs began to die out.

The Reverend Doctor John Troutbeck (12 November 1832 – 11 October 1899), who was instrumental in documenting and preserving many old Christmas carols, tried in 1869 to interest publishers in also publishing ‘Ancient St. Filbert’s Day Carols’, but the nutting carols were deemed far too racy and “he complained in his diary that by the time he had cleaned up the offensive language, “there was really not much left.” ” [2]St. Philibert & the Nutting Carols. Sheboygan, Wisconsin: Grace Episcopal Church. August 2014. Accessed December 2021 at https://www.gracesheboygan.com/images/angelus/archive/angelus-2014-08.pdf Some of the titles included “Here we go a-filberting”, “St. Filbert’s day is coming, the curate’s getting fat,” and “Dame, get up and gather your nuts”.

Note that at one point, owing to calendar drift over the centuries, St Philibert’s Day would have drifted to what was in effect the end of August and then the start of September. Katherine Swift, in “The Morville Hours: the story of a garden”, wrote:

“St Philibert was the founder and first Abbot of Jumièges, the greatest of the abbeys of Normandy, and his feast day is 20 August — which would of course, before the reform of the calendar, have fallen eleven days later in the season, at what is now the beginning of September.” [3]Swift, Katherine. The Morville Hours: the story of a garden. London: Bloomsbury. 2011. Page 256.

St Philbert’s name is also spelled “Philibert”, with an extra “i” in the middle, and in England, his name was anglicized to St Filbert.

It’s believed by some that it is owing to the association between St Filbert and the hazelnut harvest that an alternative name for hazelnuts came about: “filberts.”

In Kent, England, hazelnuts (aka filberts) are called “Cobb Nuts” or “Cobnuts” or “Kentish Cob”, even though they are not true cobnuts; they are indeed actually hazelnuts / filberts.

This web site generates income from affiliated links and ads at no cost to you to fund continued research · Information on this site is Copyright © 2022· Feel free to cite correctly, but copying whole pages for your website is content theft and will be DCMA'd.
Tagged With: Hazelnuts, Nuts