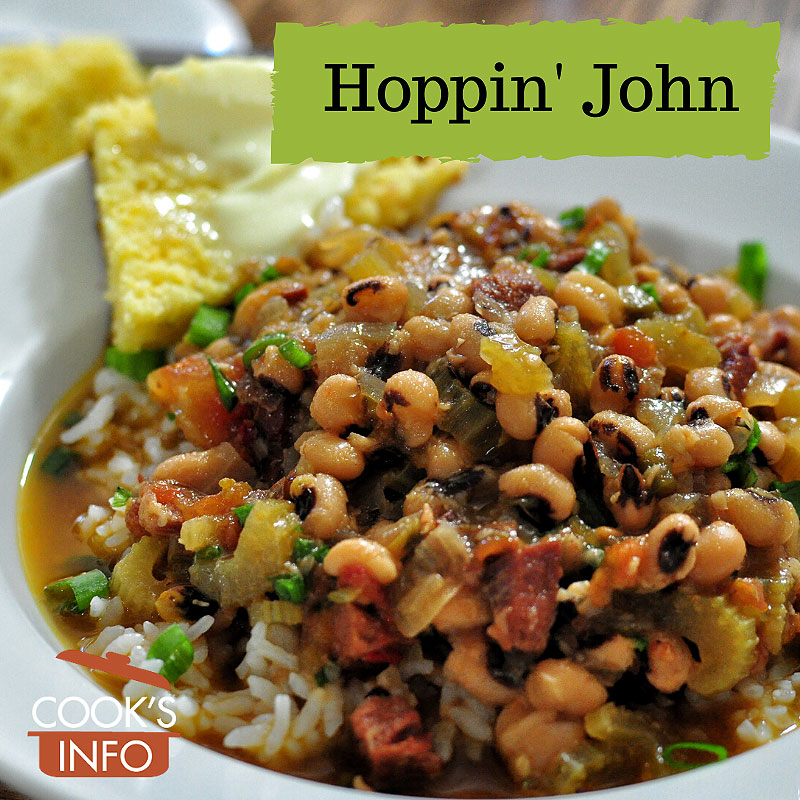 Hoppin’ John is a very simple dish made in the American south with beans and rice.

It is made from beans (cowpeas or black-eyed peas) cooked with fatty pork, with rice added. The seasoning is salt and pepper (black or red.) Some people add onion and a few herbs or greens.

Some people cook the rice separately, and serve the beans over top the rice, to avoid having the rice discoloured by the beans.

It is served on New Year’s Day for good luck.

No one is certain where the name “Hoppin’ John” or tradition originated. Explanations you will hear — including children hopping around in eager anticipation of being fed beans — are all just speculation, it seems.

The first written mention appears to be in 1830.

A dish known as hoppinjohn, which consists of black-eyed peas cooked with hog jowl, is the traditional New Year’s dinner in many well-to-do families who would not eat such coarse food on any other day. Mr. Walter Ridgeway, of West Plains, Missouri, always contended that this customer began in Civil War days; some planters who had nothing to eat but black-eyed peas at a New Year’s dinner were lucky enough to regain their fortunes, and later on they somehow connected this good luck with the New Year’s hoppinjohn. Other hillfolk, however, have told me that the custom of eating black-eyed peas on New Year’s is much older than the War between the States. The Ridgeways say that the name hoppinjohn originated when a guest named John was invited to ‘hop in’ and help himself to the food.” [1] Randolph, Vance. Ozark Superstitions. Columbia University Press, 1947. Chapter 4.

In the early 1980s, etymologists began speculation that it may be a corruption of the French term “pois pigeon” (pigeon peas), or that it came in from French areas of the Caribbean — even though it was black-eyed peas that became established in America, not pigeon peas.

This web site generates income from affiliated links and ads at no cost to you to fund continued research · Information on this site is Copyright © 2022· Feel free to cite correctly, but copying whole pages for your website is content theft and will be DCMA'd.
Tagged With: American South Food, Pigeon Peas, Rice