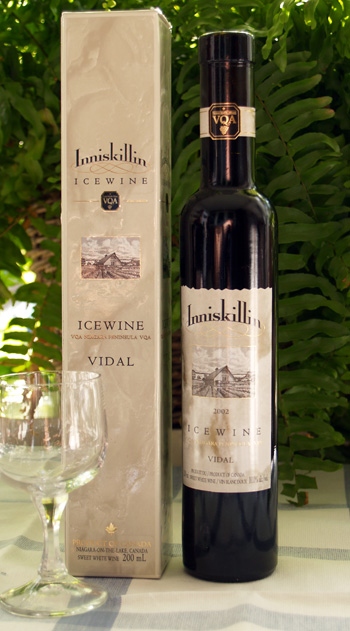 Ice Wine is a sweet dessert wine, usually made from white grapes, but now some are made from red grapes.

It is made in Germany, Austria, Slovenia, Australia, New Zealand and Canada. German Ice Wines are considered the best, and are the most expensive by far. A 375 ml bottle of van Volexm Saar Riesling can fetch up to $400 US (2007 prices.) Austrians ones are considered by cognoscenti to be a close second in quality to the German ones.

To make it, the grapes are pressed frozen. The freezing point of grapes is lower than that of pure water, because the sugar in them lowers the freezing point. Most of the water in the grape doesn’t come out in the pressing, because it’s ice crystals, so the yield of liquid is only 10 to 20 percent of what you would get from grapes that weren’t frozen, but, the liquid that does come out is very concentrated in flavours, acidity and sugars.

The harvesting tends to start in December, ending in January or February. The grapes are picked during the night, and certainly before 10 am, when the day starts to warm them up again.

Ice Wine has been made in Germany since the 1700s.

The grapes by law must be picked at or below 17 F (-8 C.) No added sugar, flavouring or colouring are permitted, and certainly no artificial freezing methods are allowed.

The alcohol content will range: a few brands are as low as 6.5% alcohol, but most are in the 8 to 9% alcohol range. Most brands are sold in 375ml bottles.

In Germany, Riesling is the grape preferred, followed by Muskateller, Silvaner, Scheurebe and Pinot Noir grapes. The main production areas are the Rheingau and Mosel-Saar-Ruwer.

Ice Wine is also made in Austria, around Neusiedlersee, where the Bouvier grape is used.

Ice Wine production in Canada is governed by laws, drafted partly drafted in consultation with makers of Ice Wine such as Donald Ziraldo of Inniskillin.

In Canada, Ice Wine can only be produced by people who belong to a Vintners Quality Alliance association in their respective province. Geographically, it is currently primarily made in the Niagara Peninsula of Ontario and in the Okanagan Valley of British Columbia. 90% of Canadian output comes from Ontario; 10% from British Columbia. The winters are cold enough in both places that it can be made almost every year.

Canada also uses primarily Rriesling grapes, as the Germans do. Canadian knowledge of making Ice Wine, in fact, was built on that of German immigrants to the country.

Most Canadian Ice Wines are sold in 375ml bottles. They lack the fruity complex notes of the German and Austrian Ice Wines, and are sweeter instead, appealing, some feel, to younger crowds.

In fact, Canadian Ice Wines were banned from Europe until 2001, because of their high sugar levels. The high sugar levels ran afoul of EU regulations, which stated that imported wine could not have an alcohol content (or potential content) higher than 15.5 %. The EU argued that the high sugar content could turn into a higher alcohol content (even though alcohol levels higher than 15% are not possible without distillation.) As part of the horse trading to get Ice Wine on the shelves in Europe, Canada had to agree to stop allowing the generic use of alcoholic product names such as Champagne, Bordeaux, Sherry etc. The agreement is to be phased in through to 2013, to give makers of Canadian knock-offs of these products time to adjust.

By law in Canada, harvesting grapes for Ice Wine can’t start before 15 November. Then, the grapes can’t be picked before they have first been frozen solid at 17 F (-8 C) and then been left exposed for at least two days to temperatures between 6 and 10 F (-12 and -15 C.) Some producers prefer to pick at the even lower temperature of 14 F (-10 C), to make sure the grapes are well and truly frozen. No artificial freezing methods are allowed. Each producer has to keep records that include the temperature at which each harvest was done, as well as the date and time, and how much was harvested, etc.

The sugar content of the wine must be 35 degrees or higher on the Brix scale.

Only alcohol that occurs naturally from the fermentation of the grapes is allowed, The resultant products will have an alcohol content of 9 to 10.5%, and higher.

Canadian Ice Wines, many feel, don’t age as well as German ones do. They are best consumed younger.

In Canada, a red Ice Wine is being made from Cabernet franc grapes, aimed primarily at the Chinese market. It is less intense in flavour, and has a rose colour.

A sparkling version is also made from vidal grapes. The second fermentation to produce the bubbles doesn’t take place in a bottle, but rather in a pressure tank, then it is bottled.

In America, a small amount of Ice Wine is produced in Idaho and Washington.

Until 2003, the laws allowed until Ice Wine to be made with artificial freezing methods for grapes. Makers would leave grapes on the vine till very late in the season, then harvest them, and freeze them themselves. Since 2003, Ice Wine made with such artificial methods can no longer be labelled Ice Wine.

In Australia, winter occurs in June and July. Only a few areas of Australia get frost and snow, and that can’t always be counted on.

The Wine Makers Federation of Australia says that Ice Wine doesn’t have to be made with naturally frozen grapes. They dispute that there is any basis in science for the grapes needing to be frozen down to -8 C, and that you can tell any difference between a grape frozen outdoors and one frozen indoors. Some people, sampling Ice Wine made by freezing grapes artificially and Ice Wine made from naturally frozen grapes, agree, and say they can’t tell the difference. Consequently, the Canadian Ice Wine industry contracted Brock University, in the Niagara Peninsula of Ontario, to try to prove that Canadian Ice Wines are chemically different from Ice Wines made from artificially frozen grapes. The scientific results are still pending or not published yet.

An Ice Wine was made between 1994 and 1997 at Bloodwood near Orange, New South Wales, by a Stephen and Rhonda Doyle from Riesling grapes.

Wellington wines of Tasmania (owned by an Andrew Hood), has made since about 1997 an Ice Wine they call “Iced Riesling.” He presses unfrozen Riesling grapes, freezes the juice to separate off the water, then makes the wine from the concentrated juice.

Long Gully Estate, in the Yarra Valley, Victoria, has made an “Ice Riesling” since 1997. They harvest their grapes in late March, when the leaves start to fall off the vines. The grapes are then frozen after harvest.

Selaks Ice Wine from New Zeland is considered very good, though it is made through artificial freezing.

Canadians argue that Australian Ice Wines made from grapes frozen after harvest are “fake” Ice Wines. (Mind you, Canadians didn’t seem to have any problem copying Ice Wine in the first place from the Germans, and calling theirs “real.”)

Ice Wine is not just a dessert wine. It goes well with blue cheeses, fruits, and even foie gras. It should be served slightly chilled.

In Germany, Ice Wine making started in the late 1700s. Some pin the year down to the winter of 1794, when a sudden, early, severe winter froze the grapes on the vine in the Franconia region.

This web site generates income from affiliated links and ads at no cost to you to fund continued research · Information on this site is Copyright © 2022· Feel free to cite correctly, but copying whole pages for your website is content theft and will be DCMA'd.
Tagged With: Canadian Food, Dessert Wines, German Food, Ice