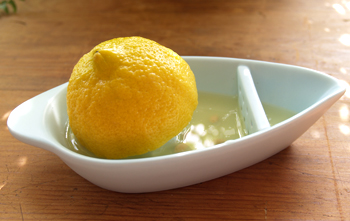 Lemon Juice
© Denzil GreenLemons are primarily used for their juice, as a souring agent to refresh the taste of foods, or to prevent food browning.

Lemon juice is typically consumed in trace amounts as a flavouring element in dishes, and never in large quantities in its own right, except when it is heavily sweetened to make a beverage such as lemonade.

Juice a lemon when it is at room temperature.

Or, zap in a microwave from 10 to 30 seconds, depending on the power of your microwave. Until you have tried it a few times with your microwave, be cautious: you want to “loosen” the juice, not boil it or make the lemon dangerously hot to handle. Then, press down on it on your countertop and roll it a bit to loosen up the juice.

When you want just a few drops of juice, poke a hole in the lemon with something like a toothpick and squeeze out what you need. Then use the toothpick to plug up the hole, put the lemon in a plastic bag, and put back in refrigerator.

Commercial bottled lemon juice can be handy to keep in the fridge. Granted, you won’t want to make lemonade from it or anything in which it is going to be the featured amongst few ingredients, but it’s fine in something you are baking, cooking or preserving.

Many cooks first trying their hands at home canning are surprised to learn that most of the reputable safety-tested home canning recipes from credentialled sources actually call for bottled as opposed to fresh lemon juice. Learn why here: The Acidity of Lemons and Home Canning

Dietitians now want us to eat whole fruits, as opposed to juice, so that we are consuming “bound sugars” as opposed to “free sugars” that get freed up during juicing. (See: Sweeteners). Lemons would be a clear exception to this rule because of the gustatory impossibility of actually consuming a whole one!

Lemons weren’t really available at all to Europeans or North Americans until the end of the 1800s, and then only to the rich. For everyone, they were a special treat, and vinegar was used as a souring agent instead, because outside Italy and Spain, lemons aren’t “natural” in the Northern Hemisphere.

This web site generates income from affiliated links and ads at no cost to you to fund continued research · Information on this site is Copyright © 2023· Feel free to cite correctly, but copying whole pages for your website is content theft and will be DCMA'd.
Tagged With: Juice