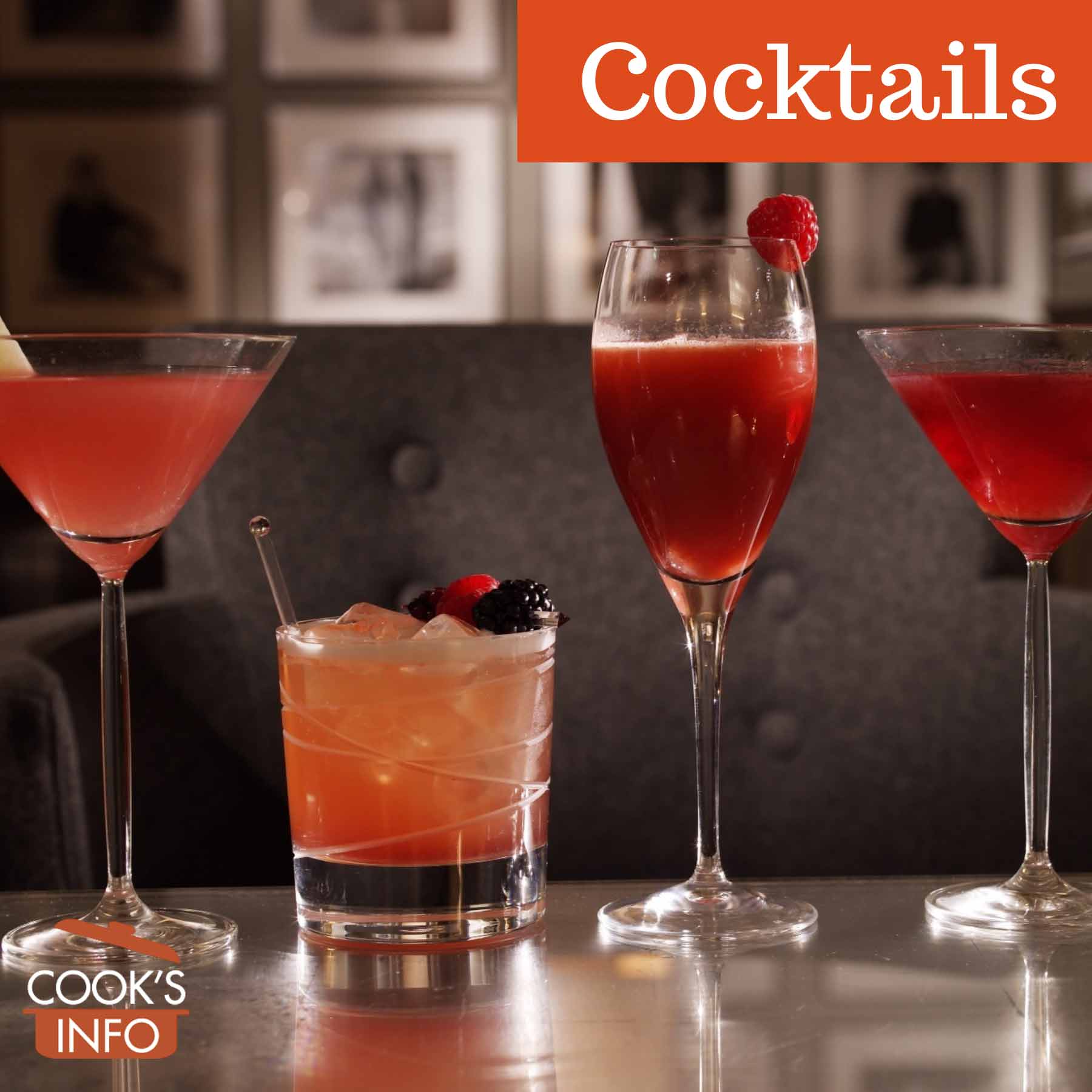 A cocktail is a mixed alcoholic beverage.

Almost any mixed drink with alcohol in it is now classed as a cocktail. It can be warm or cold, sweet or dry, and be served in the morning, afternoon or evening.

Cocktails are made in portions measured as “shots.”

A British shot is 1 ½ tablespoons (25 ml.) American shots are a bit more generous — 2 tablespoons (30 ml.) It doesn’t matter which shot measure you use in a drinks recipe, as long as you use the same measure for the whole recipe.

In inventing your own cocktails, the rule of thumb is generally 1 part of the main alcohol to 4 parts mixer.

Another rule of thumb in mixing a cocktail is, if a cocktail is pure alcohol, such as a martini or a Manhattan, it’s stirred. If it’s alcohol diluted with something non-alcoholic, such as juice, fizzy water, pop, etc., it’s shaken. This binds the ingredients better.

Always use both hands to hold the shaker, top and bottom. Ice in the shaker should definitely move around in the shaker, from its top to its bottom. You shake until the outside of shaker gets quite cold. Metal is better than plastic for detecting this.

Stirring keeps the alcohol stronger in drinks. In a martini, for instance, shaking it with the ice would cause a lot more of the water in the ice to get into the drink.

In stirring a cocktail mixture with ice, you stir gently but insistently until the outside of the pitcher gets cold, then you serve.

Many professional bar tenders prefer to serve cocktails that are smaller rather than large not necessarily because they are trying to be parsimonious with the alcohol, but so that the cocktail can be finished by the customer at the cold temperature it was meant to be enjoyed at:

“Also important is the size of the final [cocktail]. Remember that bigger is not necessarily better. In fact, many of the recipes in this book have lesser yields, for drinks that are often as small as 3 ounces. This allows you to sip a perfectly made, balanced cocktail ice cold. If it were any larger, the cocktail would become warm and insipid before the drinker could finish it.” [1]Mautone, Nick. Raising The Bar. New York: Artisan Books. 2004. Page 16. 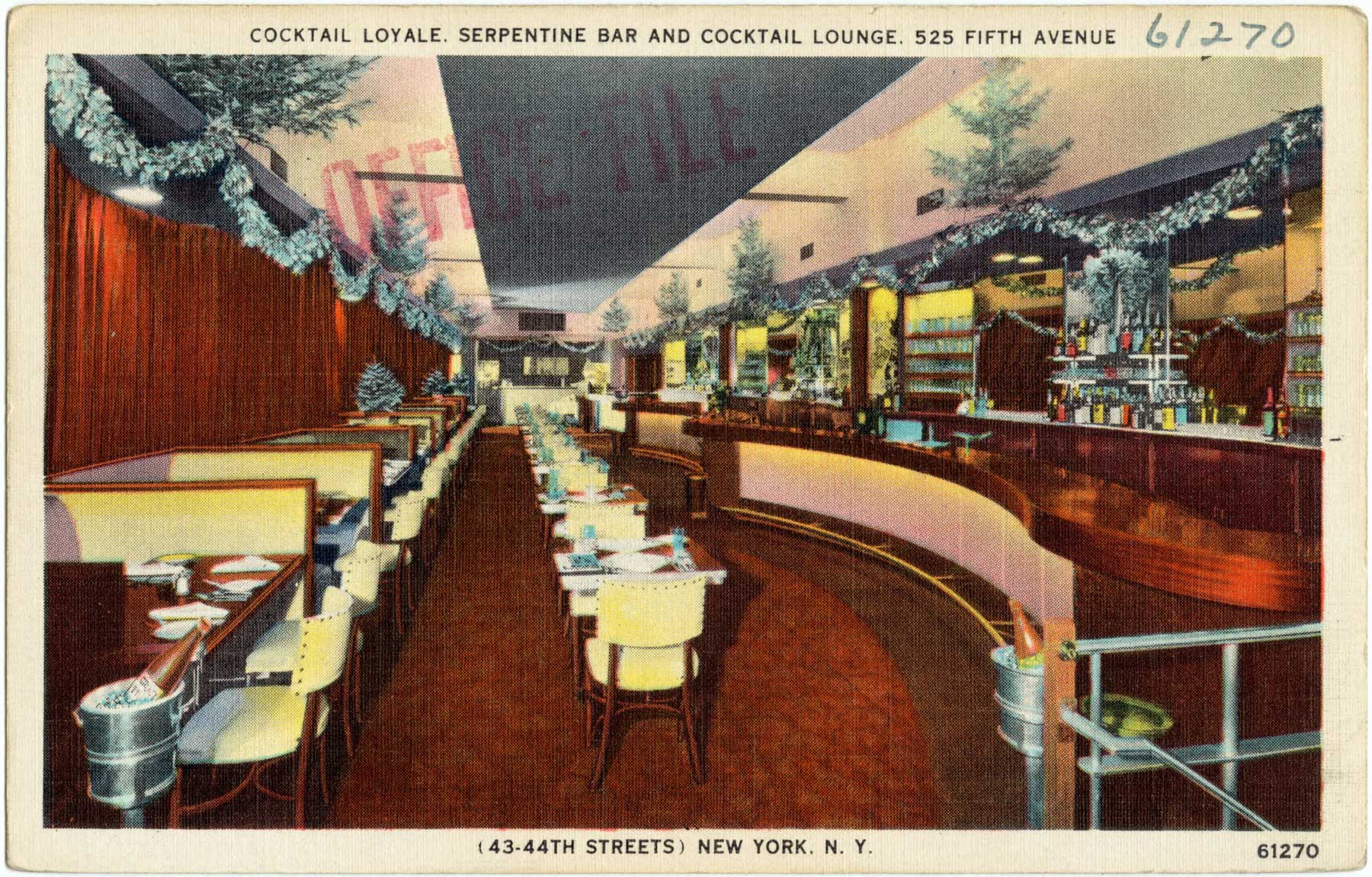 Water in cocktails can act as a flavour enhancer, as odd as that assertion seems. The food researcher Harold McGee did some experiments. He found that alcohol starts to take over what the mouth and nose experiences when it goes above 10 to 12%. You start to get the alcohol burn dulling the taste buds. Water can reduce that effect, by diluting the alcohol, changing the balance in the drink, and therefore allowing flavours to come to the forefront. You also get more aroma: aroma molecules tend to cling to alcohol molecules. Dilute the alcohol, thereby decreasing proportionately the alcohol molecules that can be clung to, and you have more aroma release.

An early mention of the word ‘cocktail’ referring to a beverage occurred in the “Morning Post and Gazetteer” of London,  20 March 1798: “cock-tail — vulgarly called ginger”.

A subsequent mention occurred in an April 1803 edition of the Farmer’s Cabinet journal of Amherst, New Hampshire: “Drank a glass of cocktail—excellent for the head.” [2]Tréguer, Pascal. Notes on the second-earliest mentions of a drink called ‘cocktail. Blog entry. 17 September 2019. Accessed April 2021 at https://wordhistories.net/2019/09/17/cocktail-second-occurrences/ [3]Haigh, Ted. The Origin of the Cocktail. Imbibe Magazine. 24 Feburary 2009. Accessed May 2021 at https://imbibemagazine.com/origin-of-the-cocktail/

Another mention in passing occurred in the “The Balance and Columbian Repository” of New York on May 6, 1806.

“A political candidate who had lost the election provided a satirical itemized list of his campaign losses, including “411 glasses bitters, 25 do. cock-tail.”. [4]The Random Researcher: The Happiest of Hours. Wonders & Marvels Blog. August 2014. Accessed May 2021 at https://www.wondersandmarvels.com/2014/08/from-the-archives-the-happiest-of-hours.html

This was just a passing mention, though, with no definition, and so a curious reader wrote in to ask what was meant:

“Approximately a week later, the paper’s editor responded to a confused reader who had asked “will you be so obliging as to inform me what it meant by this species of refreshment?” ” [5]The Random Researcher: The Happiest of Hours. Wonders & Marvels Blog. August 2014. Accessed May 2021 at https://www.wondersandmarvels.com/2014/08/from-the-archives-the-happiest-of-hours.html

“As I make it a point, never to publish anything (under my editorial head) but which I can explain, I shall not hesitate to gratify the curiosity of my inquisitive correspondent: Cock-tail, then is a stimulating liquor, composed of spirits of any kind, sugar, water and bitters it is vulgarly called a bittered sling, and is supposed to be an excellent electioneering potion inasmuch as it renders the heart stout and bold, at the same time that it fuddles the head. It is said also, to be of great use to a democratic candidate: because, a person having swallowed a glass of it, is ready to swallow any thing else.” —  ‘The Balance and Columbian Repository’. 13th May 1806

Some people consider New Orleans the birthplace of the cocktail. The Museum of the American Cocktail was formed there in 2004:

Up until bitters were declassified as healthful, almost all cocktails had a dash of bitters in them.

“And it was Jerry Thomas who, a few years before the Civil War, gave the aid and encouragement of his genius to the cocktail, then a meek and lowly beverage pining for recognition and appreciation, and by self-sacrificing work in the laboratory raised it to its rightful place among the drinks. A perfect flood of new mixtures soon showered upon a delighted world, and the Metropolitan Hotel at Prince Street and Broadway, in New York, where Jerry Thomas was Principal Bartender in the days when the metropolis was the scene of the soundest drinking on earth, became the first great cocktail house.” — Herbert Asbury, “The Bon-Vivant’s Companion”. New York. 1 September 1928.

“The glances over cocktails
That seem to be so sweet
Don’t seem quite so amorous
Over Shredded Wheat.” — Frank Muir (English humourist. 5 February 1920 – 2 January 1998)

“But after the (ed: First World) war the new fantastic development of jazz music and the steps that went with it, became, in the contemporary phrase, ‘all the rage.” (ed: in Britain.) Cocktails were also accepted, though they went directly against British upper-class tradition, the chief ingredients being gin and vermouth. Gin had for two centuries been considered a very lower-class drink indeed, and vermouth, like absinthe, was dangerously Parisian. Only wines or ‘fruit cups‘ had been drunk on social occasions before the war; with whisky reserved for sporting uses. Punch printed many a joke against cocktails…” — Graves, Robert and Alan Hodge. The long week end: a social history of Great Britain, 1918-1939. New York: W. W. Norton & Company. 1994.

There are at least 50 different inane theories as to where the word cocktail came from, ranging from Aztec princesses to horse’s tails, and none of them is any more likely than the other.

In 1806, the word “cocktails” appeared in writing in a weekly journal called the “Balance and Columbian Repository”, published in Hudson, New York. The word was defined as a composition of spirits with sugar, water and bitters. In 1862, the world appeared in “How to Mix Drinks, or The Bon-Vivant’s Companion”, by Jerry Thomas (1825-1885.) The book contains 236 recipes for mixed drinks, but Thomas referred to just 10 of them as cocktails.

McDowell, Andy. Old and Improved: Happily, the future of cocktail culture is also its distant past. Toronto, Canada: The National Post. 31 July 2009.

This web site generates income from affiliated links and ads at no cost to you to fund continued research · Information on this site is Copyright © 2022· Feel free to cite correctly, but copying whole pages for your website is content theft and will be DCMA'd.
Tagged With: Alcohol, Cocktails