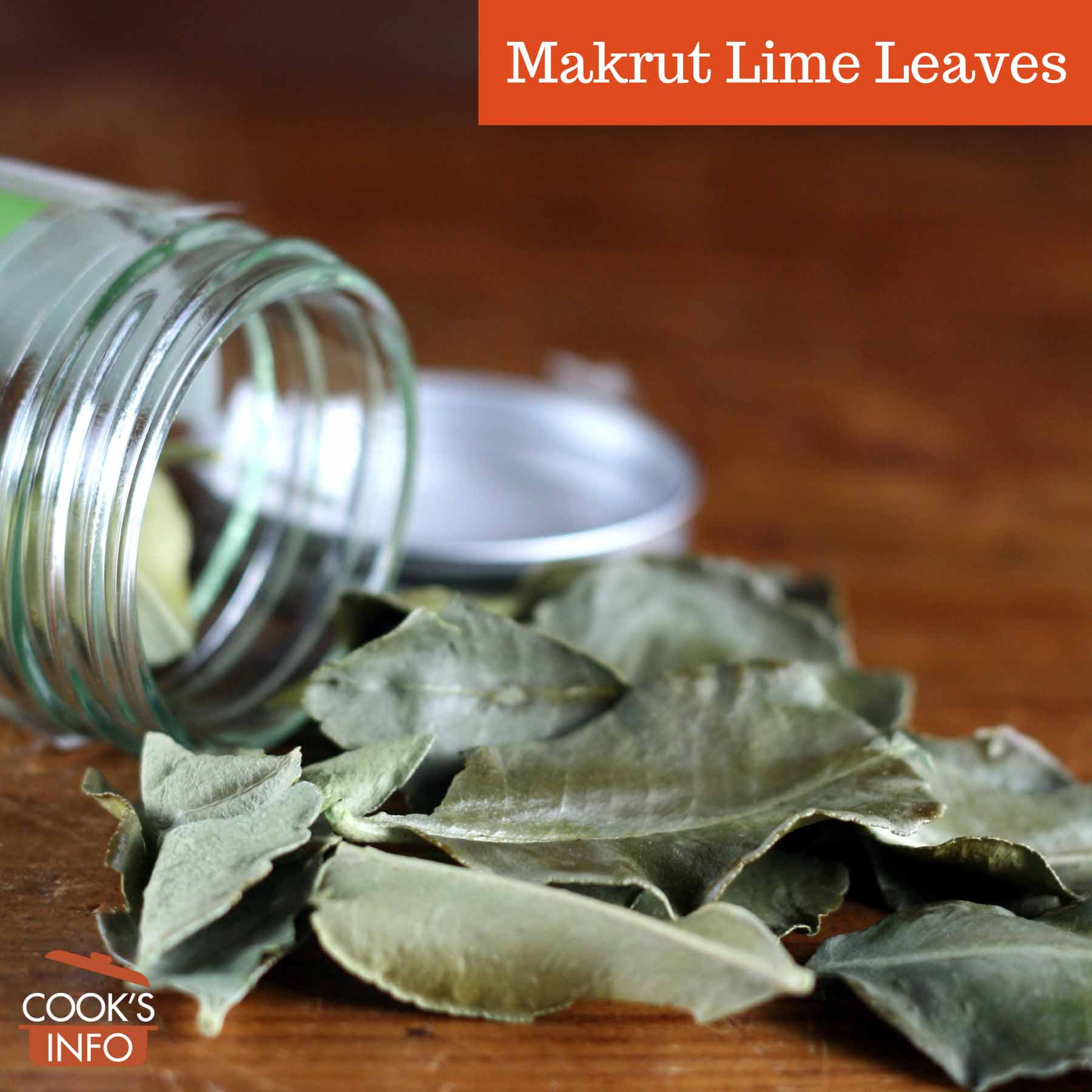 The makrut (formerly known as kaffir) lime tree is used in cooking for its leaves, and the zest from the skin of its fruit.

It produces small fruit. The bumpy, wrinkled skin is green changing to yellowish-green when fully mature. It has a stubby neck. Inside, the fruit is lime-green.

The juice of these limes is not really used, except in Indonesian cooking, because it is so bitterly sour.

What’s used are the zest of the peel and the very fragrant leaves from the trees.

Note that it’s just the zest of the peel that is used, in order to avoid any of the very bitter pith attached to the peel.

The leaves are a dark, glossy green and look like two leaves stuck together tip to tip; they are often described as being “double-lobed” or “double-leaves.” Each separate leaf is about 5 cm long (2 inches). They are harvested by hand from thorny branches.

The leaves impart both a citrus flavour and aroma. They are used a great deal in Thai green curries.

You can buy makrut lime leaves fresh, frozen or freeze-dried. Dried ones are sometimes sold as “granules”, but that just means chopped and dried in this instance.

Whole makrut limes are also sold pickled in brine in bottles. You use the rind. Dried rind is also available, but may not be that good because the factory process often leaves the white pith on it. Some cooks feel that you may be better just to use regular lime zest if you don’t have a fresh makrut lime to zest.

When zesting the limes, avoid the very bitter white pith just under the skin.

In recipes, count each joined leaf as two leaves.

When used in dishes that are simmered, you can just put them in whole as you would a bay leaf. And, like a bay leaf, you’re not meant to eat them. Fish out and discard before serving, or tell guests to leave them at the side of their plates. You can take a little nibble to taste it — it won’t hurt you — but a whole leaf will have you chewing away for a while.

When using dried makrut lime leaves, use twice as many to compensate for the loss of flavour in the drying. Rehydrate them first in warm water before using, or grind them up with a mortar and pestle.

Dried leaves can be ground to a powder, and then used as you would a spice.

The fresh leaves can be used in salads to be eaten. Used like this, they are finely shredded with the tough rib in the middle being discarded. Don’t use dried or frozen leaves in a salad.

To freeze the leaves, spread them out on a plate, freeze for a few hours, then collect, bag and freeze. The frozen ones don’t look as glossy when thawed, but retain most of the flavour and the aroma.

You can freeze whole makrut limes in freezer bags for zesting. Just take out a frozen lime, zest off as much as you need, rebag and refreeze. They are easier to zest, too, when frozen. 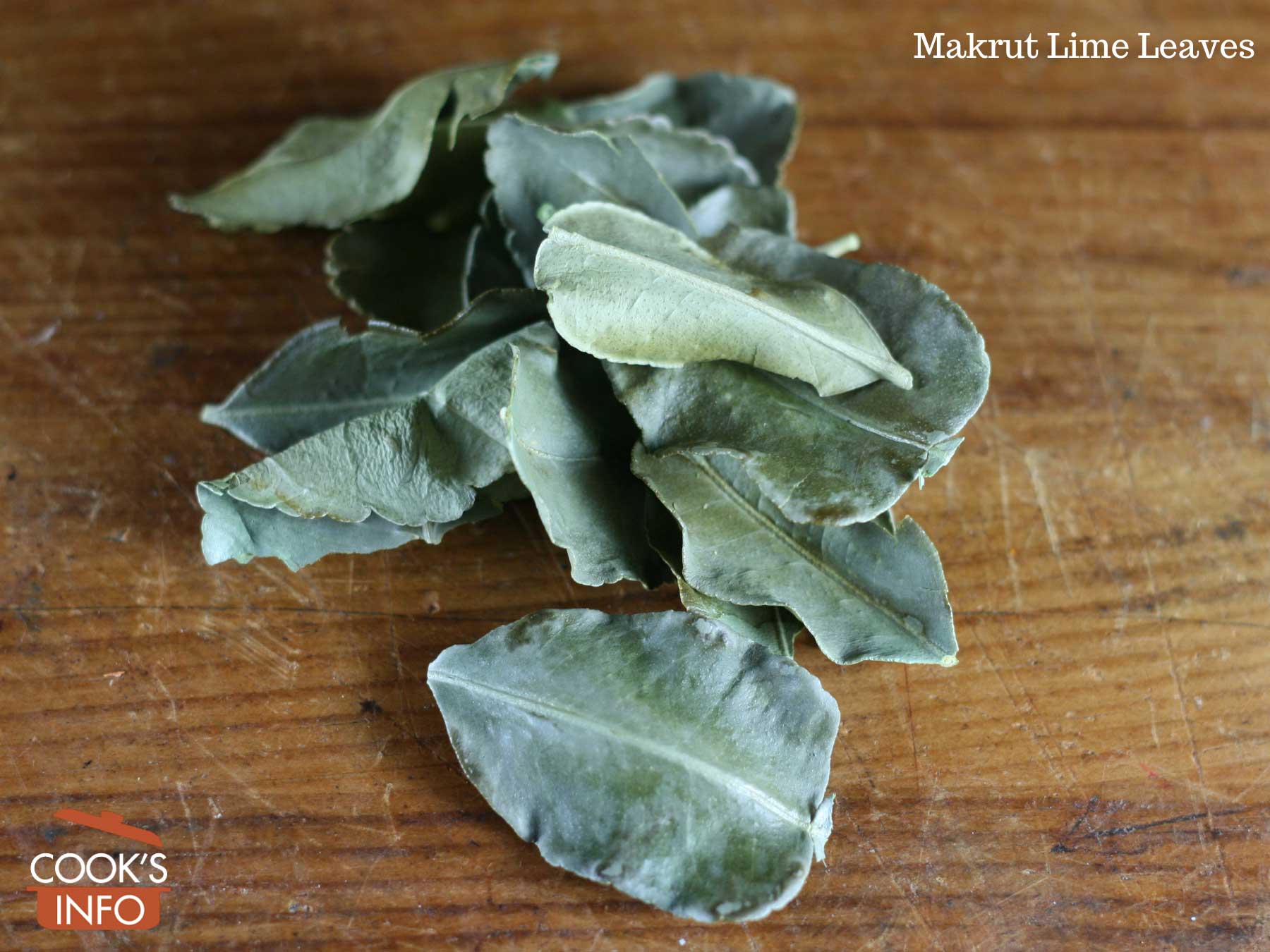 Native to and grown in Southeast Asia.

The previous common English name for this lime of “kaffir lime” was always a bit dodgy to any literate person who understood the meaning, history and context of “keffir”. A debate began on Wikipedia about 2010 to rename the Wikipedia entry for “kaffir lime” to “makrut lime”. As of 2021 there was still resistance amongst Wikipedia editors to the name change, citing widespread common usage of the “kaffir’ term, but some food writers [2]Anderson, Palisa. Makrut lime: the weird and wonderful citrus at the heart of Thai flavours. Just don’t call it kaffir. Manchester: The Guardian. 1 March 2020. Accessed June 2021 at https://www.theguardian.com/food/2020/mar/01/makrut-lime-the-weird-and-wonderful-citrus-at-the-heart-of-thai-flavours and supermarkets [3]Clarke, Josie. Waitrose changing name of Kaffir lime leaves over racial slur concerns. London: The Evening Standard. 16 June 2021. Accessed June 2021 at https://www.standard.co.uk/news/uk/waitrose-changes-name-kaffir-lime-leaves-over-racial-slur-concerns-b940891.htmlare now going ahead with the name change to makrut. CooksInfo thinks this name change is probably going to win out, and so have made it for this entry.