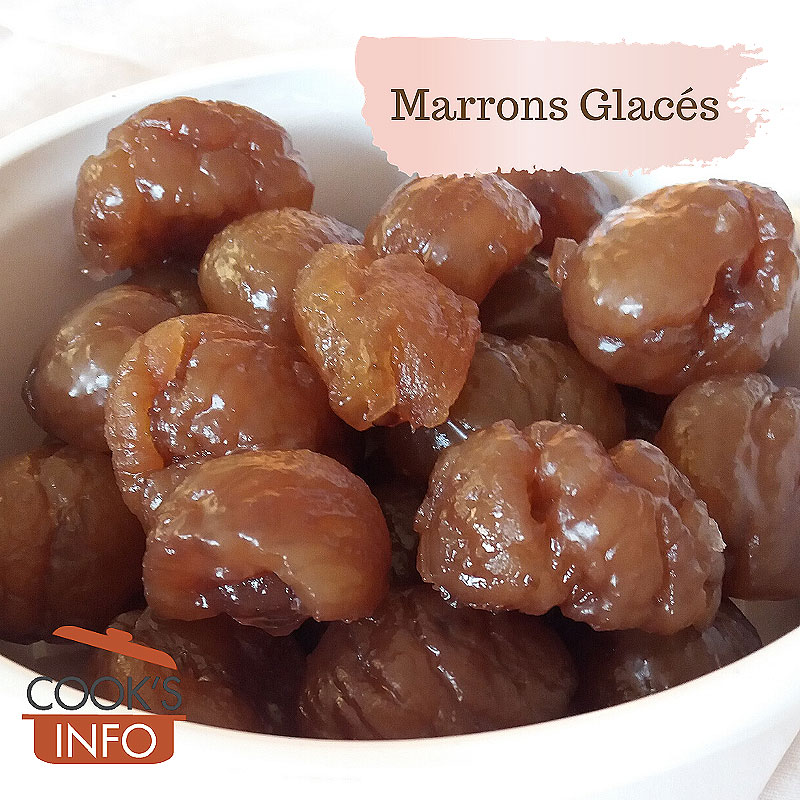 Marrons glacés (literally, “glazed chestnuts”) are candied chestnuts. The chestnuts used are the larger “marron” type, not the smaller “châtaigne” type (see entry on Chestnuts for the difference.)

The chestnuts are peeled, then either dipped in a syrup and dried in an oven, or soaked in syrup and vanilla for a week, then dried.

They are usually sold individually wrapped inside a sealed box. Once the sealed box is opened that they come in, they tend to dry out pretty quickly, despite the individual wrapping. They are very expensive.

There are many recipes for making your own, but all are very labour intensive. “This is a long and intricate process and is therefore seldom undertaken in the home.”  [1]New Larousse Gastronomique. Paris: Librarie Larousse. English edition 1977. Page 218. 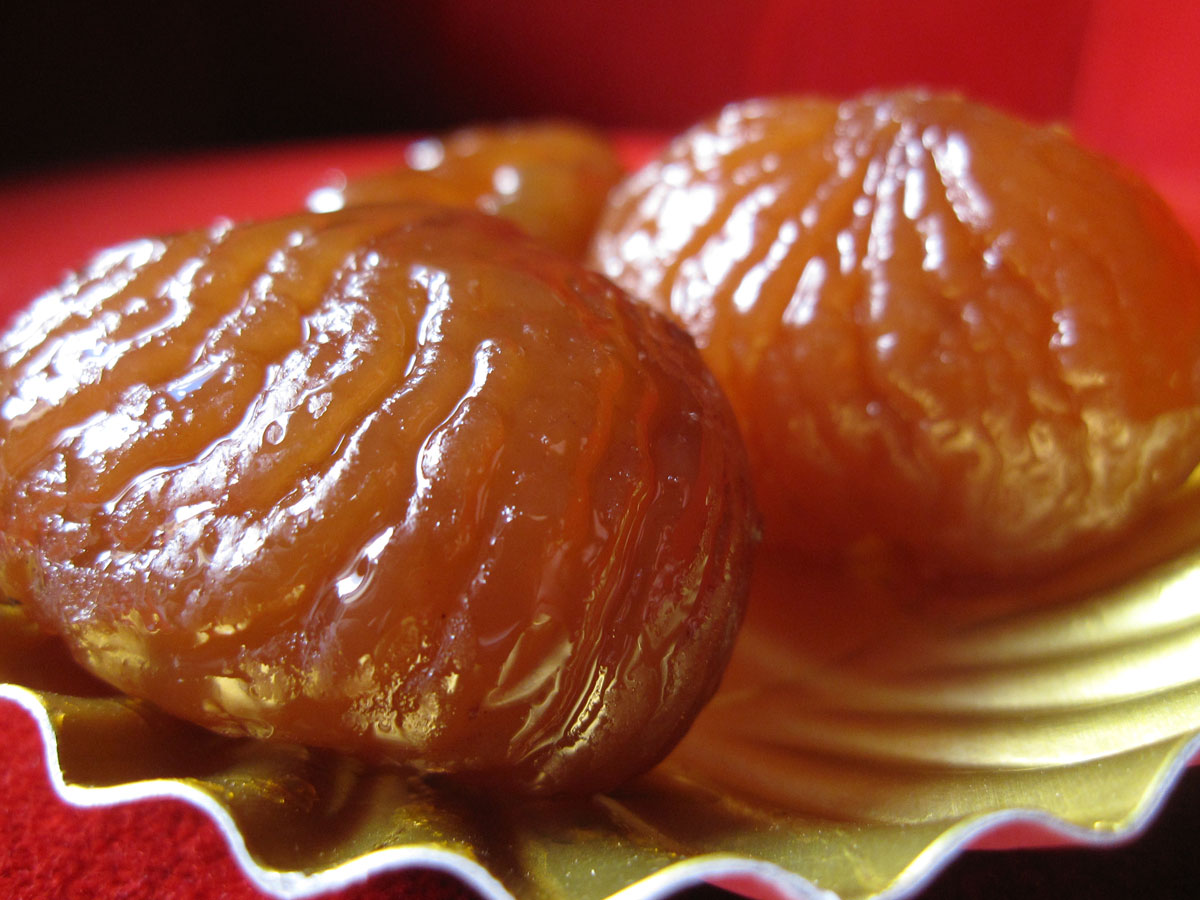 Marrons glacés that have dried out and crystallized can be chopped up and used as a topping for ice cream.

Marrons glacés were invented in the 1600s during the reign of Louis XIV by a confectioner in Paris.

“When chestnuts are in season, preserve a batch by candying them and giving them a glacé coating. They are a tempting sweetmeat and are also used for decorating desserts.

Snip the pointed tops off the chestnuts and drop them, a few at a time, into boiling water. Blanch the chestnuts for 2 1/2 minutes, then drain and peel them. Remove all the brown inner skin.

Put the peeled chestnuts in a saucepan and add cold water to cover them. Bring the water to the boil, reduce the heat and simmer the chestnuts until they are tender but not broken.

Dissolve the sugar and glucose or dextrose in the water, using a saucepan large enough to hold all the chestnuts. Bring the syrup to the boil and add the drained chestnuts, then bring them to the boil. Remove the pan from the heat and leave the pan in a warm place for 24 hours.

Bring the syrup back to the boil, uncovered, then remove the pan from the heat and put a lid on it. Leave to stand for 24 hours. Repeat this process again, adding 5 – 8 drops of vanilla essence to the syrup. Some of the chestnuts will probably disintegrate — save the pieces as they can be pressed together into small balls which taste good even if they do not look perfect. Life the chestnuts out of the syrup and leave them to drain on a wire rack, placing it over a plate to catch the syrup which drips off.

Follow the directions on page 136 for preparing the glacé finish [Ed: See CooksInfo entry on “Glacé finish for fruit“], using the quantities of sugar and water given. If they are to be kept for any length of time, the marrons glacés should be wrapped in cooking foil to prevent them from hardening.” [2]Jones, Bridget, Ed. Home Preservation of Fruits and Vegetables. London: AFRC Institute of Food Research. 1989. 14th edition, revised. Page 139. 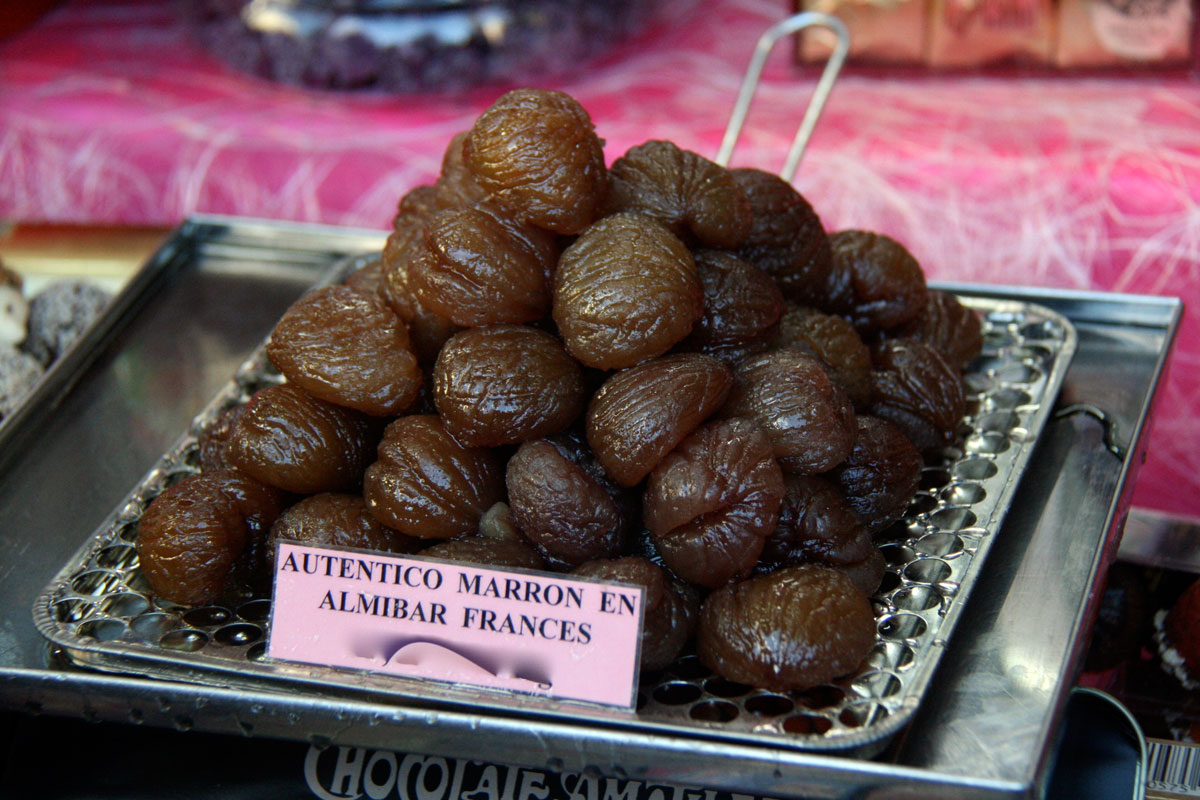 This web site generates income from affiliated links and ads at no cost to you to fund continued research · Information on this site is Copyright © 2022· Feel free to cite correctly, but copying whole pages for your website is content theft and will be DCMA'd.
Tagged With: Chestnuts, French Food