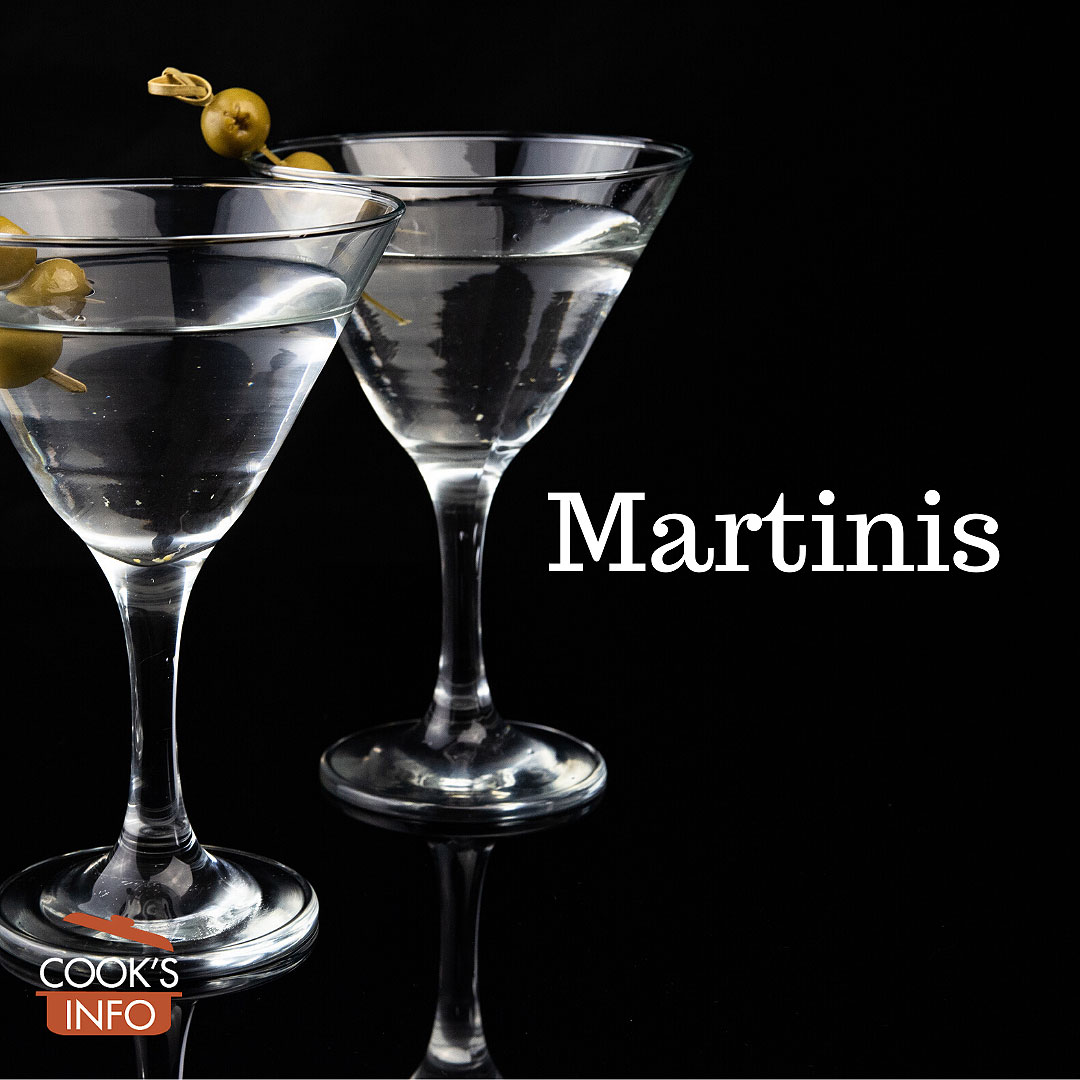 A martini is a mixed cocktail drink that has been called by some “America’s most lethal weapon.”

Nowadays, anything, practically even chocolate milk, is called a martini as long as it’s poured into a martini glass. But the gospel truth is that the real thing only ever has three ingredients in it: gin, white (aka French) vermouth, and olives, and it is never served on ice.

The age-old fight over a change to the classic three ingredients concerns lemon. Some like a twist of lemon; some say there is no place for the taste of lemon in a martini.

This battle, though, has been overtaken by another one, which has caused the former two opposing lemon twist/ no-lemon camps to join forces in common allegiance to oppose a new, common foe: the trend to swap vodka in for gin, because today’s generation of drinkers prefer alcohol with less taste. 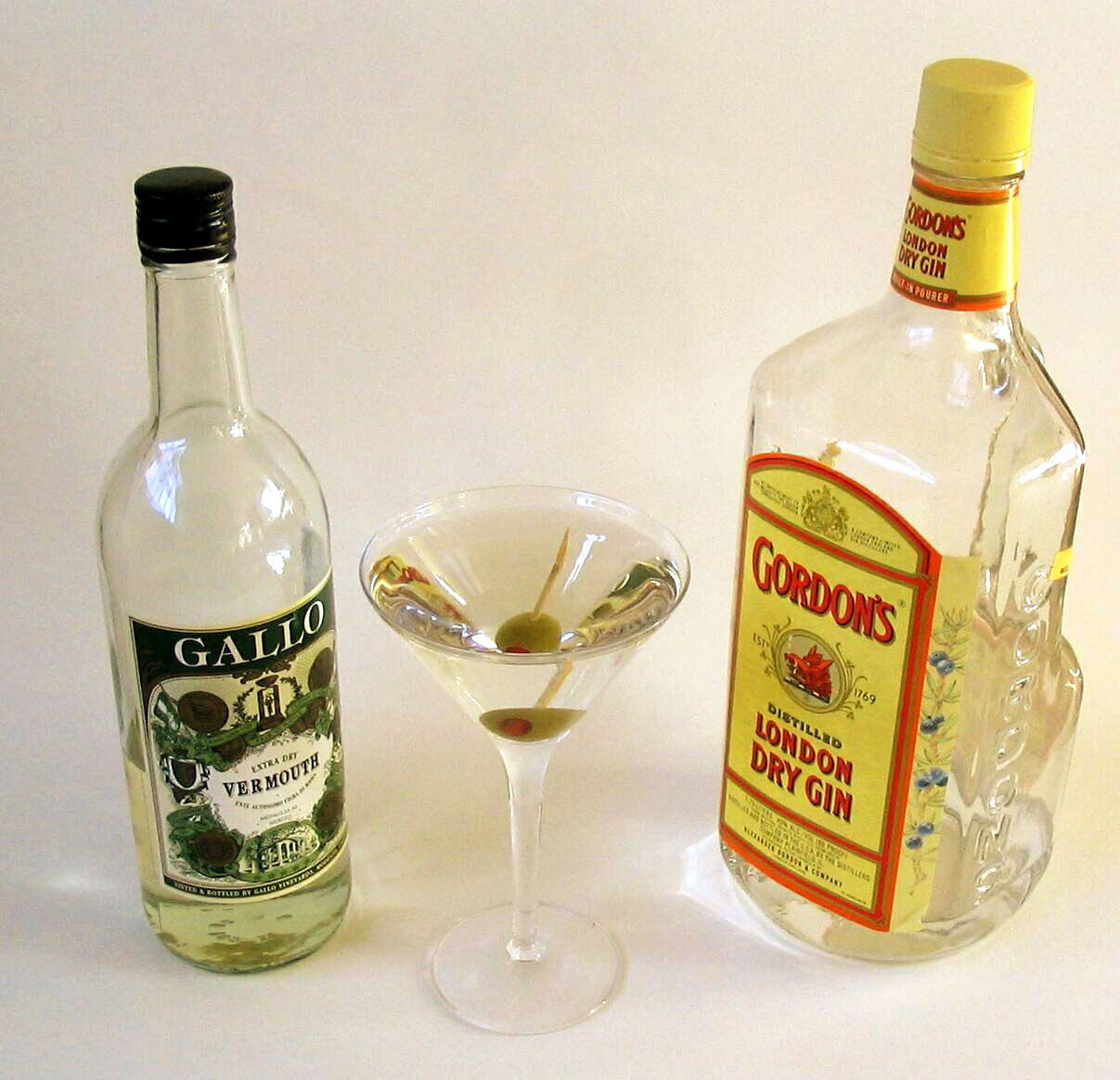 Gin versus vodka in martinis

The genuine, original martini has gin in it, not vodka.

If someone just says “martini”, and knows their drinks, they mean a martini with gin. If an educated drinker wanted a vodka martini, they would say “vodka martini.” Still, many bartenders now ask whether people want a gin or a vodka martini. Bartenders know that by default, a martini is gin, but they don’t want the wastage of a customer rejecting it because the customer didn’t know any better.

Gin is always the highest quantity of liquid in a classic martini.

A standard classic martini is 3 parts gin to 1 part French vermouth; dry is 6 to 1 or 7 to 1 (meaning, 6 parts or 7 parts gin to 1 part vermouth.) The higher the ratio in favour in gin, the drier it is. And the drier it is, the higher the alcohol content, as the stronger gin is replacing weaker vermouth. 6 to 1 is perhaps the classic ratio for a dry martini, and it was the ratio praised by the songwriter Tom Lehrer (1928 – ): “Hearts full of youth, hearts full of truth, Six parts gin to one part vermouth.”

Dryness has become an obsession amongst some connoisseurs. Dry martini fanatics will measure their vermouth with an eye dropper; some say just put the vermouth bottle next to the gin bottle and tell it to wave hello.

Some people are so particular about their martinis that they won’t drink any martinis other than the ones they’ve mixed themselves at home. 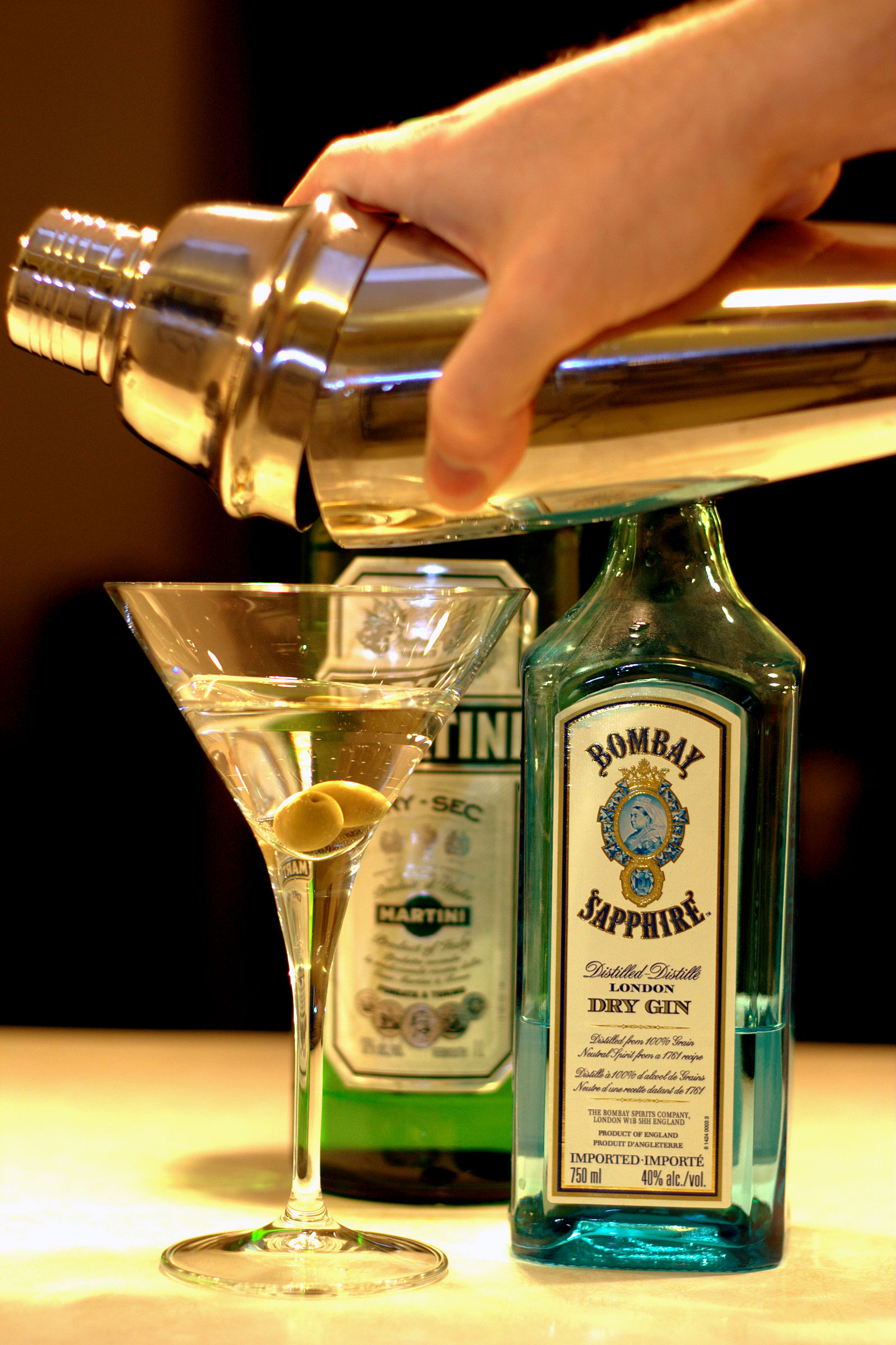 Shaking a martini results in a colder martini, but also makes it cloudy, which causes it to lose some eye appeal. Shaking it mixes air in, which stirred fans say makes the taste too sharp (they call it “bruised.”) It also mixes the vermouth in more thoroughly, which stirred fans say takes away the complexity of the drink. Somerset Maugham summed up this viewpoint: “Martinis should never be shaken. They should always be stirred so that the molecules lie sensuously on top of each other.” [1]W. Somerset Maugham (1874–1965.) From: In Conversations with Willie: Robin Maugham, 1978.

Vodka made from potatoes is oilier than vodka made from grain. Shaking a potato-based vodka martini helps to distribute the oiliness better.

Technically, once a martini is shaken it is no longer a martini: it is called instead a “Bradford.”

James Bond’s shaken martini was not always a gin martini. In Ian Fleming’s stories about him, he orders in total 19 vodka martinis and 16 gin martinis. In Casino Royale, where Bond and his drink first appeared, he called it not a martini but a “vesper.”

Bond: “Just a moment. Three measures of Gordon’s, one of vodka, half a measure of Kina Lillet. Shake it very well until it’s ice-cold, then add a large thin slice of lemon-peel. Got it?”

Bond’s martini use Kina Lillet Vermouth, aka Lillet, which contains a lot of quinine. This vermouth is sometimes used as an apéritif, and dates back to 1887. 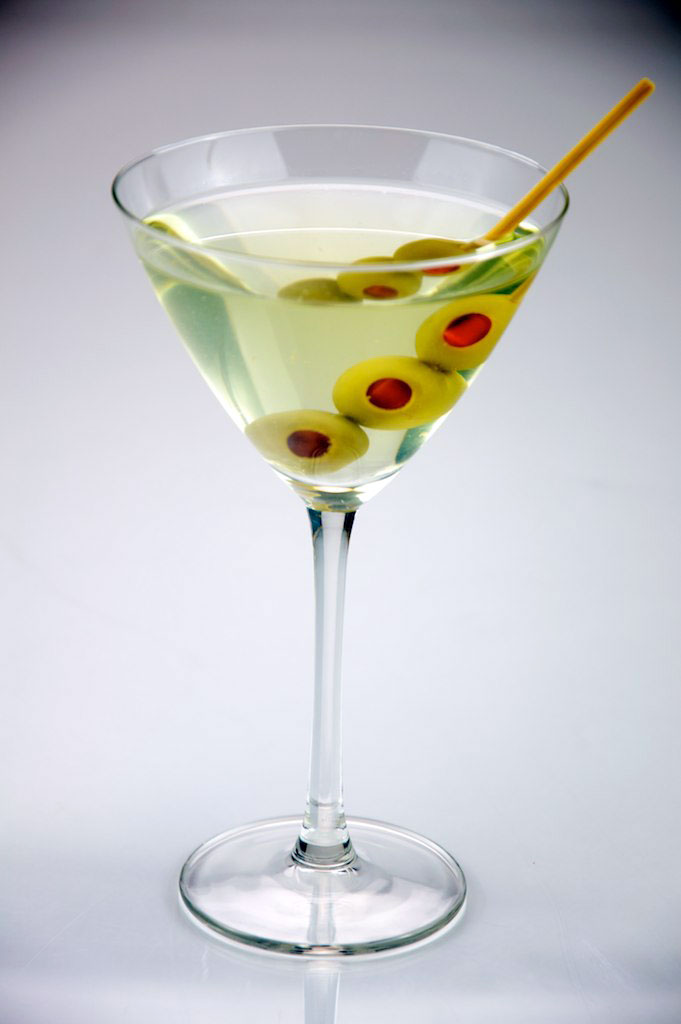 There are no real facts around how the martini was invented. It is, perhaps expectedly, attributed to several different bartenders.

The town of Martinez, about 48 km (30 miles) north of San Francisco, claims to be where they were invented in 1860, though this is discredited by most.

Early versions of martinis were sweet. They used ‘Old Tom Gin’, and would be garnished with a maraschino cherry.

Martinis were still a sweet drink at the end of the 1800s. They were half gin, half sweet vermouth, with sugar syrup and orange bitters, and a cherry. The sweet vermouth may have been Italian (red) vermouth.

In 1897, in Centralia, Wisconsin, a reporter wrote:

“Olives in Cocktails. The double hotel sells countless cocktails, of which the Manhattan and the martini have the call, so far as popularity goes. For those who do not relish a cocktail of whisky, there is a drink made up of equal parts of French vermouth and Plymouth gin, with a dash of orange bitters. This is preferred by many to the combination of Italian vermouth and Tom gin. Cocktails no longer contain the cherry at the bottom of the glass — that is they are not so served unless there is a request to that effect. Cherries are going out along with other sweeteners in drinks. The present demand is for the dry, and it is considered that an olive is the best substitute for the sugary fruit, and all of the swell grillrooms now serve ‘cocktail olives’ — pitted, by the way — with this universally favored drink.” [2]New Things in Tipples. Centralia, Wisconsin: The Centralia Enterprise And Tribune. Saturday, 4 December 1897. Page 13.

A reporter in Decatur, Illinois noted in 1903 that Martins were amber-coloured, which could have been caused by using red vermouth:

“Up to this week the Manhattan and martini cocktails have been practically unknown, and when some one introduced the amber-colored fluids there was a mad rush. Many thought the beverages as harmless as beer, hence their downfall.” [3]Whole State Celebrated: Passing of Prohibition in Vermont Marked by Widespread Drunkenness. Decatur, Illinois: The Decatur Review. Wednesday, 10 June 1903. Evening edition. Page 4.

Quotes from other newspapers hint at the slow evolution of martinis.

A 1903 ad in the New York Times promotes Italian (aka red) vermouth for Martinis.

“The real MARTINI COCKTAIL must be made with martini & Rossi ITALIAN Vermouth. Protect yourself against pernicious substitution. The genuine and original has the Agent’s yellow label.” [4]Advertisement in The New York Times. New York. Monday, 22 August 1904. Page 7.

A Ohio writer in 1908 still suggested the sweeter Old Tom Gin as acceptable, and calls for the addition of bitters.

“A martini cocktail is two-thirds Old Tom or dry gin, one-third vermouth and three dashes of orange or Angostura bitters.” [5]McSosh, Michael. Americans Take The Mixed Drinks, But Few Know Just What They Are Getting. Hamilton, Ohio: The Republican News. Tuesday, 3 March 1908. Page 6. 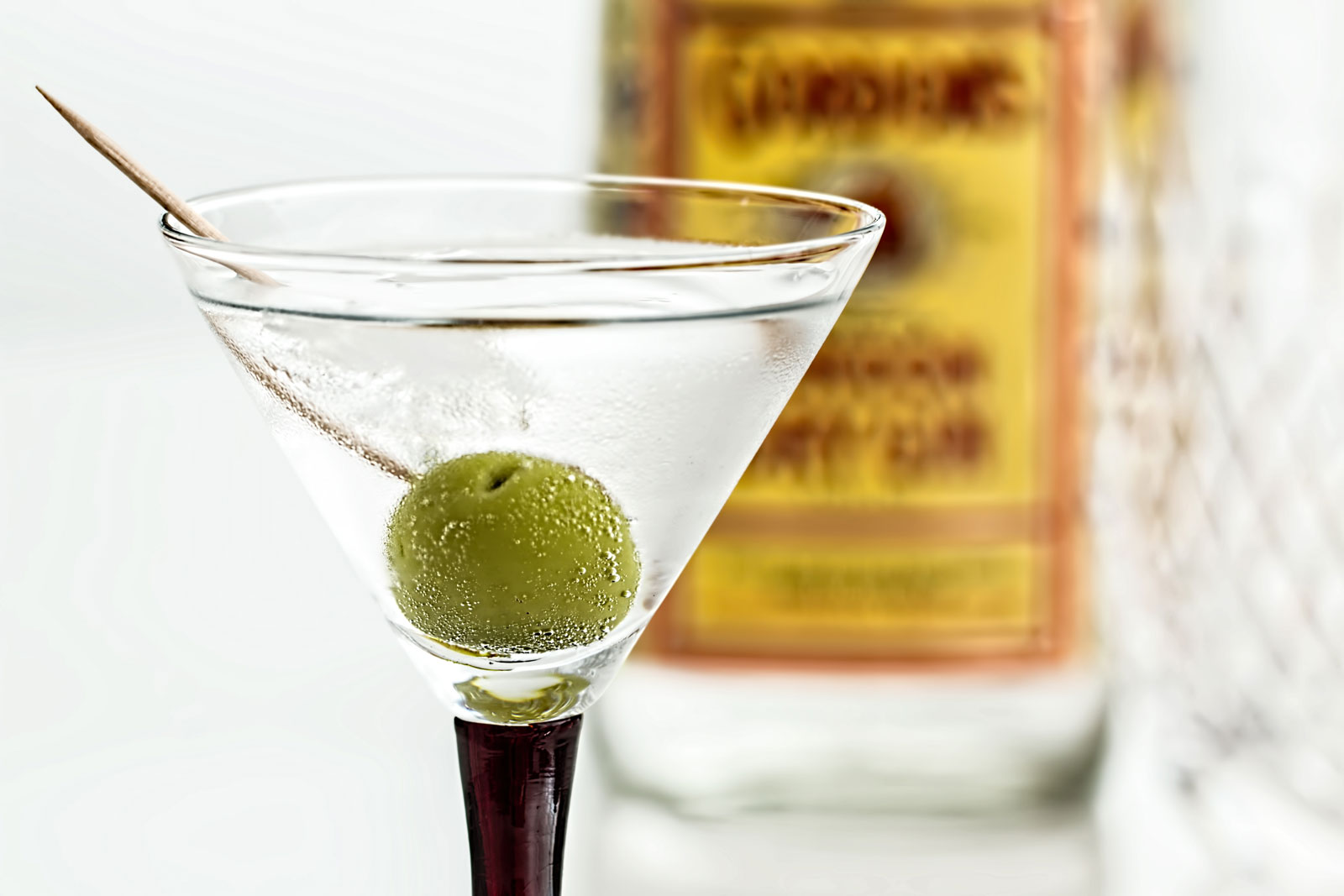 “High balls seem simple enough but they require a nicety of proportion to be good. Martini cocktails are very difficult to produce perfectly, and yet the feminine drink mixer feels that her education is incomplete unless she can make a martini, which to a great extent has entirely replaced the old whiskey cocktail and Manhattan. While she is learning she will spoil any amount of the necessary liquids, producing mixtures that must be thrown out as soon as tasted.” — DRINKS FOR HOT WEATHER. Women Learning to Mix Them — New Fashions — A Bartender’s Advice. In Fort Wayne Morning Journal-Gazette. Fort Wayne, Indiana. Saturday, 13 July 1901. Page 4. 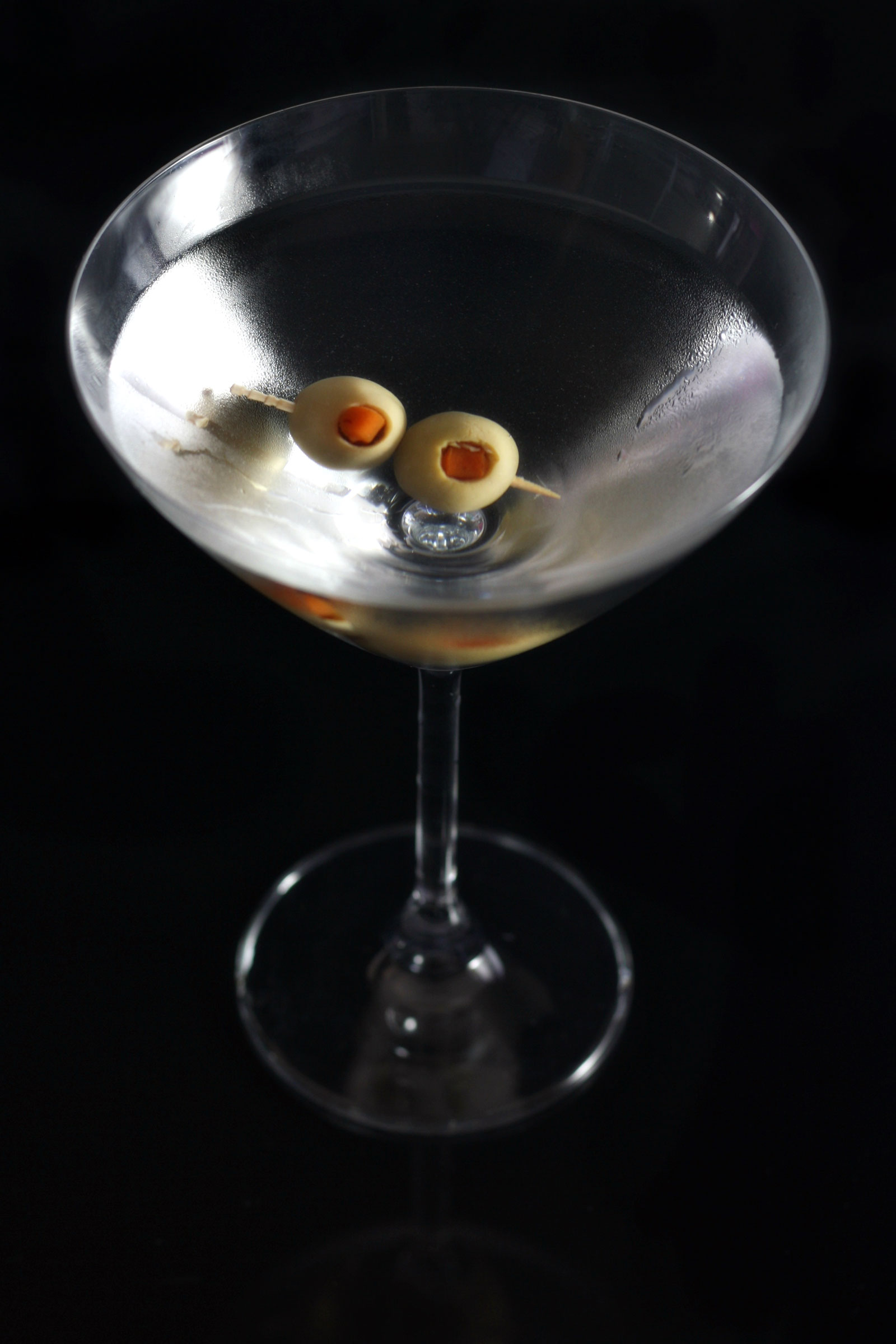 The word “martini” referring to a cocktail first seems to have appeared in print in 1888.

Kaufman, George B. The Dry Martini: Chemistry, History, and Assorted Lore. In The Chemical Educator, Vol. 6, No. 5. New York: Springer-Verlag. 2001.

This web site generates income from affiliated links and ads at no cost to you to fund continued research · Information on this site is Copyright © 2021· Feel free to cite correctly, but copying whole pages for your website is content theft and will be DCMA'd.
Tagged With: Mixed Drinks